Our live coverage of Henri has ended. You can read more from CNN's meteorologists here.

Tropical Storm Henri made landfall along the coast of Rhode Island near Westerly on Sunday afternoon, according to the National Hurricane Center.

The storm is expected to travel westward across Connecticut tonight, and it continues to weaken as it moves farther inland.

If you're just reading in now, here's what you need to know about the storm:

The Weather Prediction Center has issued a level 3 of 4 risk for excessive rainfall in parts of the Northeast for Monday into Monday night due to Tropical Storm Henri. This is considered a moderate risk.

This includes southern New York and much of central and southern New England and the cities of Hartford, Albany, Springfield and Bridgeport.

Henri’s slow forward motion over the northeastern US will make for favorable conditions for flash flooding to occur with scattered, heavy showers and thunderstorms expected through the day Monday. Forecast rainfall totals between Monday and early Tuesday morning are expected to be in the 1 to 3 inch range for areas in this moderate risk.

Similar to the flooding situation in the New York City area Sunday afternoon, there will be the risk for pockets of heavier rain that stall over a given location, thus making flooding likely Monday. In these situations, isolated rainfall totals can amount to around 6 inches.

Henri will begin to take a turn to the east Monday into central New England and eventually depart the Northeast during the day Tuesday as a post-tropical cyclone.

Tropical Storm Henri is now a 40 mph tropical storm located about 20 miles southeast of Hartford, Connecticut, according to the 5 p.m. ET update from the National Hurricane Center. Remember: A tropical storm has maximum sustained surface winds ranging from 39 to 73 mph.

The storm continues to weaken as it moves farther inland and is expected to become a tropical depression tonight and a post-tropical cyclone by Monday afternoon. This weakening trend has prompted the NHC to cancel all remaining tropical storm warnings.

The center of the storm will track toward the Connecticut/New York border tonight, then take a turn to the east and eventually travel out to sea beginning Monday afternoon.

Heavy rain and flooding remain significant threats for portions of the Northeast through Monday night while the storm surge and damaging wind risks have subsided. Flood watches remain in effect from New Jersey through New Hampshire into Monday.

Tropical Storm Henri is about 100 miles northeast of New York City and 20 miles southeast of Hartford, Connecticut, according to the 5 p.m. ET update from the National Hurricane Center.

Henri is expected to travel westward across Connecticut tonight before making a sharp turn eastward. 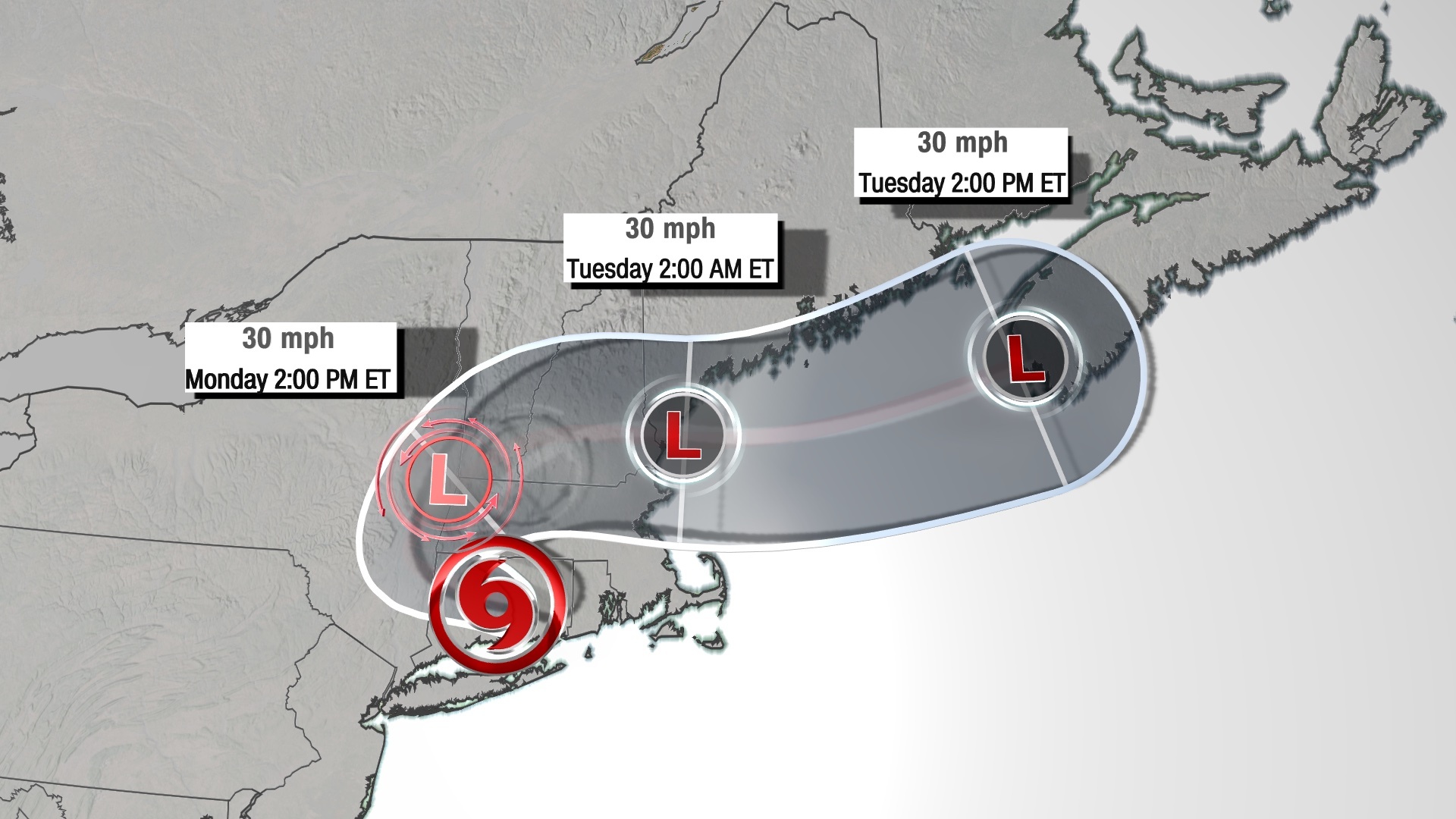 President Biden said that the administration is taking the potential impact of Tropical Storm Henri "seriously," despite it no longer being a hurricane, during remarks from the White House on Sunday.

"Fortunately it's no longer a hurricane, it's been downgraded to a tropical storm. And we are taking it seriously, though, because the size and the storm's surge and the rainfall it's producing," the President said.

Biden said the federal government is prepared to assist those state's impacted by the storm and the heavy rainfall.

"And while New Englanders are used to dealing with some tough weather, this storm has the potential for widespread consequences across the region with significant flooding, power outages, that could affect hundreds of thousands of people. And so we're doing everything we can now to help those states prepare, respond and recover. I can't think of anyone better to lead this operation than Deanne Criswell of FEMA," he said.

Biden said that he spoke with governors of the states that could be affected and "urged them to take advantage of the assistance FEMA can offer in advance and committed to do everything we can to support their communities through the storm and afterwards.

He continued, "FEMA has already prepositioned resources in the region to speed our ability to respond, including food, water and life-saving communications equipment, as well as generators. In close cooperation with the electrical sector, preparations are in place to address significant power outages and resources and support that's staged at the edge of this storm to be able to move quickly in to help."

Biden encouraged residents in the Northeast to "do their part to prepare."

"Follow the guidance from the local authorities. Some places have already had heavy rains and winds and dangerous storm surges. Henri is going to continue to move across much of the northeast. So it's important to monitor it closely and be prepared in your home and your community. Make sure you have the supplies for your entire household... And don't forget that you may need to seek shelter while battling the Delta variant and Covid-19. So wear a mask, and try to observe social distancing," he said.

President Biden is scheduled to speak at 4 p.m. ET to update the country on how his administration is responding to Tropical Storm Henri.

Earlier today, ahead of Henri's landfall, Biden approved emergency declarations for the states of New York and Connecticut. Yesterday, he approved a similar declaration for Rhode Island.

In his remarks today, the President is also expected to discuss the ongoing evacuation in Afghanistan.

A flash flood warning is in effect until 5:45 p.m. ET for New York City and parts of northeastern New Jersey and southern New York.

A band of heavy rain associated with Tropical Storm Henri has stalled over the region since this morning and a moderate rain continues to fall. More than 5 inches of rain has fallen in New York’s Central Park since yesterday, making this the heaviest two-day rainfall total for this location since Hurricane Irene in 2011, according to the National Weather Service.

This rain should continue through the evening before likely shifting north and west tonight.

Tropical Storm Henri is now a 50 mph tropical storm located over Rhode Island, according to the 2 p.m. ET update from the National Hurricane Center.

Tropical storm-force winds currently span up to 125 miles away from the center of the storm.

As forecast, the storm’s forward speed is beginning to slow, now moving northwest at 9 mph.

“On the forecast track, Henri is expected to slow down further and possibly stall near the Connecticut-New York border tonight, with an east-northeastward motion across northern Connecticut and southern Massachusetts expected on Monday,” says the NHC.

This will worsen the flood threat associated with the heavy rains falling from this storm, including the flash flood warnings currently in effect for parts of Connecticut and Massachusetts.

Connecticut Gov. Ned Lamont said Sunday afternoon that residents should not get complacent even though Tropical Storm Henri is not hitting as a hurricane.

During a news briefing Sunday afternoon, Lamont said that most of the power outages right now are in the southeastern part of the state. He said they will be tracking the storm as it moves further inland and urged caution.

Twice as many crews are available to help with power restoration than ever before, he said. The state is expecting to see temperatures above 90 degrees this week, and he said they will restore power as soon as possible.

Lamont said the biggest concern right now is flooding from the amount of rain received so far. Warnings will be issued for localized flooding as the storm moves inland, David Manning with the National Weather Service said.

Manning said he talked with Connecticut Gov. Ned Lamontearlier today and that they will work together on recovery and response efforts.