That puts the total number of customers -- that's households or businesses, not individual people -- without power for both states at 796,472.

“As of 1:30 pm on September 15, 2018, Duplin County has had 2 fatalities due to flash flooding and swift water on roadways. All citizens are advised that due to the potential hazards associated with the storm, emergency services may not be immediately available,” the Duplin County Sheriff’s office posted to its official Facebook page.

This is the 7th storm related death in North Carolina plus one in South Carolina—bringing the total to 8 for the Carolinas.

Pastor Joey Canady shot this video while surveying the damage Hurricane Florence caused inside the Hampstead Baptist Church. “As you can see, the ceiling collapsed and it’s a mess,” Canady narrated in the video. 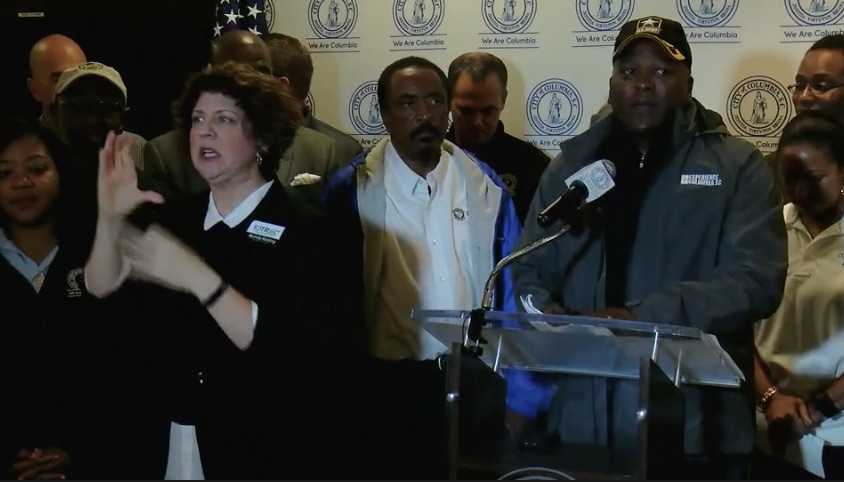 Fayetteville, North Carolina, Mayor Mitch Colvin just warned residents that if they refused to leave the area, which officials say could soon be inundated with rising river water, they need to notify their next of kin "because loss of life is very, very possible."

“Please take this seriously,” he said. “The worst is yet to come, get to higher ground now, once flood waters rise, it will be hard to get to you to rescue,”

The Red Cross is asking for volunteers by going through its website. There is transportation provided for anyone who needs it, the mayor said. 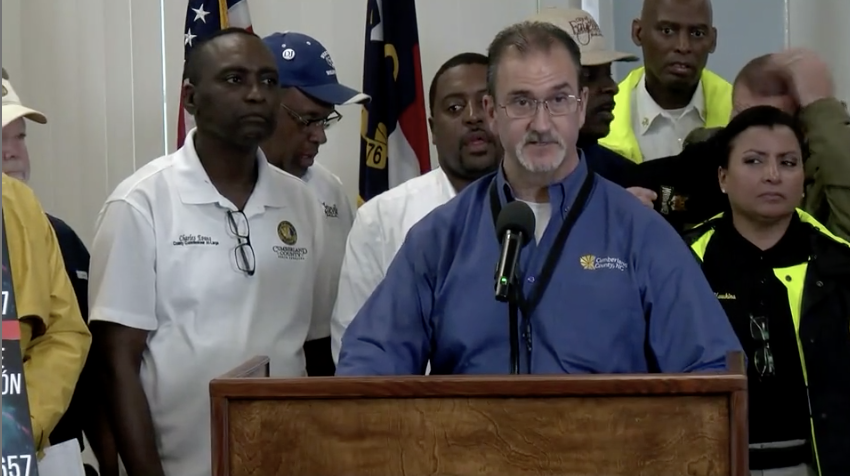 "We do believe the Cape Fear River will crest at 62 feet which is less than Hurricane Matthew. We are being cautious -- I will tell you that -- because we don’t know for sure that 62 feet is the top crest," Tracy Jackson, Cumberland County Emergency Services Interim Director, said in a presser.

"That is what we're anticipating, but we are preparing for worse if we need to," he added.

As a precaution, the county has issued a mandatory evacuation for people one mile on either side of the Cape Fear river.

Residents of Cumberland County, the city of Fayetteville, and the town of Wade, have been ordered to evacuate as officials fear rising river waters will lead to widespread flooding.

"All residents within one mile of the banks of the Cape Fear and Little River should leave IMMEDIATELY," the police department tweeted, as the city's communications director told CNN "the worst is yet to come."

"We're starting to see the waters rise rapidly. It's something we've seen before with hurricane Matthew. It's going to be a little bit worse this time around," Kevin Arata said.

"What we're telling people is the worse is yet to come. Really the rains are starting to collect because it's hitting harder up north. When it goes into those banks or tributaries up there and then comes down, that's where trouble starts. While we haven't seen it rise all the way yet, it's going to happen here in the next 24 to 48 hours," he said.

Florence is traveling westward, but it's not done dumping rain on the Carolina coast.

CNN meteorologist Allison Chinchar said some coastal areas of North and South Carolina should prepare for another 12 hours of rain — or more.

"That question of when does it finally end is on a lot of folk's minds. The problem is for the majority of them, you still have at least probably a good 12 hours to go, if not longer," she said.

That's because Florence is moving at a speed of about 2 mph. That's slower than most people walk.

"You could probably walk faster than this storm has been moving. The good news is it is still moving," she said.

A 61-year-old woman died in South Carolina when her car hit a tree that fell in Hurricane Florence, according to South Carolina Office of Emergency Management spokesman Antonio Diggs.

Diggs said the woman was driving in Union County on Friday but did give any additional details.

This is the first death reported in South Carolina linked to the storm. Five people have died in North Carolina:

The American Red Cross says more than 150 blood drives have been canceled through early next week in Georgia, North Carolina, South Carolina and Virginia because of Florence.

Those cancelations will result in more than 4,400 uncollected blood and platelet donations, the organization said.

"We need platelet blood donations now, and in the coming days, to recover the donations canceled by the storm," the Red Cross said in a statement.

The organization is encouraging residents in unaffected areas to donate blood to help.