CNN’s live coverage of Hurricane Ian can be found here.

Florida Gov. Ron DeSantis called Ian "a 500-year flood event" and said people can expect the storm to continue to have impact across the state as it leaves record-setting flooding hundreds of miles away from where the hurricane made landfall on Wednesday.

“This storm is having broad impacts across the state, and some of the flooding you’re going to see in areas hundreds of miles from where this made landfall are going to set records,” he said at Florida's emergency operations center in Tallahassee.

“The impacts of this storm are historic, and the damage that was done has been historic and this is just off initial assessments,” DeSantis added. “We’ve never seen storm surge of this magnitude. This is going to require years of effort to rebuild and to come back.”

“For those in need of help who qualify, you go to FEMA.gov or you can call 1-800-621-3262,” DeSantis said. “Make sure you take a picture of the waterline in your home because if you can show that, we’re able to get assistance to you faster.”

The Florida governor also urged caution for residents, saying “this is still a hazardous situation.”

“This thing is not done creating damage,” he added.

Florida Power and Light says restoring power for its customers in Fort Myers and Naples will take longer than in other parts of the state.

About 1.1 millions of the company's customers are without power at the moment, and while restoration has already begun, the severely impacted areas may have to wait longer, said Peter Robbins, a spokesperson for the company.

"We started our restoration work yesterday," he told CNN. "We've already restored about three-quarters of a million customers, but clearly the more impacted areas near Naples and Fort Myers will take longer. We're just now going in there today, doing damage assessments and trying to figure out where we can get our crews to start restoring power."

"We won't stop until every last person is on, but I know our customers are going to need some patience," he added.

The devastation in some areas is hampering the speed of restoration work and makes the process more precarious, Robbins explained.

With hospitals in many areas impacted by Ian, Robbins told CNN that the priority is always power for critical infrastructure.

"We work with all the counties in our service territory before storm season and they prioritize critical infrastructure, like hospitals and 911 centers, and police and fire stations, he said. "We absolutely can work with them to restore those critical pieces of infrastructure first. We're also working simultaneously to restore our customers and people's homes, but we absolutely can work with counties to prioritize certain facilities."

While Hurricane Ian has passed, recovery work and damage assessments have now begun in earnest, according to Jamie Carson, director of communications for Sarasota County government.

“We're asking our community to work together and to check on your neighbor,” she said during a Thursday briefing. “Take this time not to worry about the debris. ... Spend this time with your friends and family. Go check on that neighbor that you're worried about.”

Most of the damage is located in the southern areas of the county, she said.

“We're seeing damage reports across the community on all types of structures. We are aware of some collapses of certain buildings at different locations and we're getting additional reports in. So this is a minute-by-minute situation,” Carson told media.

In the northern end of the county, Carson said some people are leaving shelters, but she warned the roads are still impacted by debris from Hurricane Ian.

“If you are exiting those evacuation centers, you are literally taking your life into your own hands,” she said. “Because there are power lines down, there are branches and trees down in the roadways there is standing water. We ask that you stay where you are.”

Collier County Bureau of Emergency Services Director Dan Summers implored people who evacuated during Hurricane Ian to stay in place for now and not go outside to look at any damage to their homes.

"Stay secure. We've got so much assessment left to do. We don't know the status of drainages and canals that are still full. We've got a lot of moving water, a lot of debris, power lines down and so there's so many unknowns, and by all means if you're in a secure location, sit tight," he told CNN's Poppy Harlow and Jim Sciutto.

"While we did not have the wind event that our neighbors have had, we certainly had the water event that far exceeded anything that we had during Hurricane Irma," Summers said.

The area has not seen such storm surge "in several generations," he added.

"We are still having some areas with some road closures that we're having a hard time getting into, but we are getting in there either by boat or high-clearance vehicle. There is some good news ... as we see the road flooding begin to recede. Our goal is to complete any of that search and rescue by dark tonight," he said, adding that "it's a very fluid situation."

The chief said not all people are accounted for, however, the numbers could be influenced by those who evacuated at the last minute prior to the storm.

The department did receive several calls for help after the storm started, and crews waded several blocks in high surge waters to rescue a couple stuck in their home, he added.

Flooding is the "biggest concern" in Orange County, the county's public safety director Danny Banks said on Thursday that, adding that there is a possibility "of up to 24 inches of rain in the county."

"We have numerous neighborhoods, specifically in Orange County right now, that our fire department is working aggressively to evacuate," Banks said during a briefing. "We have seen likely somewhere between 10 and 16 inches of rain in Orange County already and we anticipate more rain as we progress through the hours today."

Currently, there are nine neighborhoods in the county that the fire rescue team is working in to evacuate residents, according to Banks, and "very soon" that team will be supported by the Florida National Guard.

"You can expect within the hour to see National Guardsmen working directly with our fire rescue teams as they enter those neighborhoods and try to help people get out," he said.

Shelters have "plenty of capacity" and continue to house more than 1,000 people, according to Banks. That number is expected to go up today.

"We did see some people, including people in our special needs shelters, that started to go home this morning but to replace those we have more people that are evacuating from the flood-impacted areas of the neighborhoods," he said.

As power companies continue doing assessments, there are approximately 200,000 to a quarter million homes without power, according to Banks.

"We'll have a more accurate update, I think, within the next couple of hours as to exactly how much power," he said.

Banks said while they are still in the impact phase, they "are quickly transitioning into the response."

"There are literally thousands of first responders now in the streets of Orange County, rescuing people where needed and responding to calls for help," he said.

A portion of the Sanibel Causeway has been washed away by storm surge from Hurricane Ian, according to video from CNN affiliates WBBH and WPLG.

At least three sections of the causeway have been washed away, according to aerial video from WPLG.

CNN geolocated the location where WBBH is reporting from, and the roadway that was washed out is a ramp up to the causeway's second bridge, spanning the second half toward Sanibel Island.

Two portions of the ramps to both bridges and a stretch of roadway that crossed an island in the middle of the causeway have been completely washed away.

The causeway is the only way to get to or from Sanibel and Captiva Islands to Florida's mainland.

Sanibel Causeway and Pine Island Bridge are "not passable and they are going to require structural rebuilds," said Florida Gov. Ron DeSantis during an update briefing on Thursday.

According to Florida 511, all lanes of the bridge are currently closed and the severity of the closure is listed as “major.”

Watch reporting from the scene: 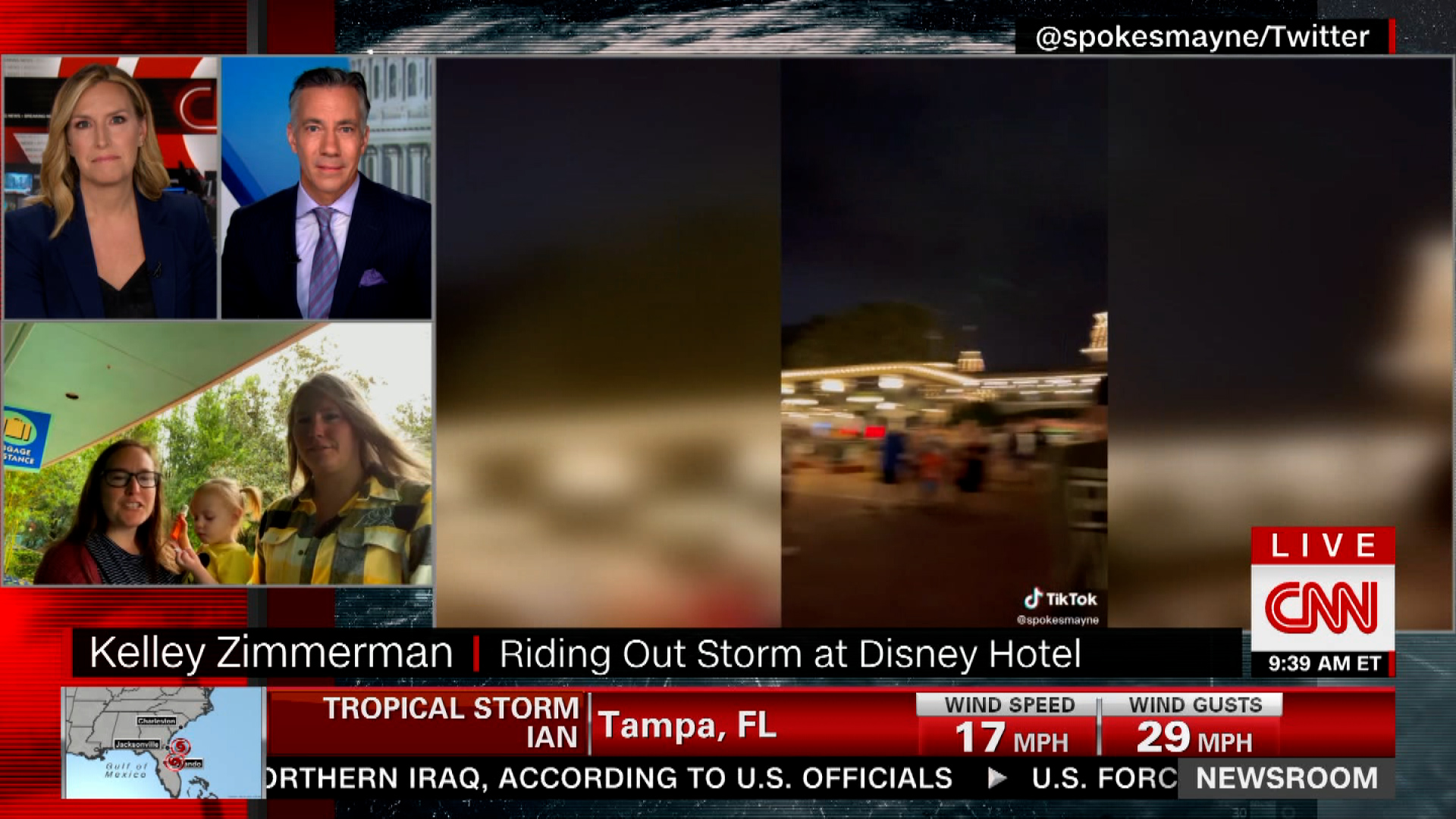 Disney World was completely closed for business as it braced for the impact of Ian's landfall on the west coast of Florida on Wednesday.

Kelly Zimmerman told CNN that she rode out the hurricane with her sister and her children at a hotel in the theme park located in Lake Buena Vista, Florida.

"Disney is wonderful and they try to make it a great experience. And so even though things were closed, they were still trying to make it great for the kids and had like the arcades all free in the hotel and just different characters coming, and dance parties and crafts. They tried to make the best of it so that the guests would still have a good experience," she said.

While they experienced rain and wind, Zimmerman said she "very safe the whole time and protected."

On Sunday, the family had plans to go to Mickey's Halloween party.

"We're just going to be patient and wait for the storm to clear so we can go to Mickey's Halloween" party, she said. "Hopefully that will still be able to happen without any delay."

Powerful Hurricane Ian crossed Florida from Wednesday into Thursday, leaving a path of destruction in its wake. As the now-tropical storm exits the state, the complete assessment of damage still needs to be seen, but here's what we know: