Our live coverage has ended. You can follow the latest on Isaias on CNN Weather.

Isaias is still a tropical storm, according to the National Hurricane Center's 8 p.m. ET advisory, with maximum sustained winds of 70 mph.

The NHC said Isaias is "expected to re-strengthen to a hurricane overnight while it approaches the southeast coast of Florida."

Isaias continues to head toward the US. The latest forecast shows the storm traveling close to Florida's Atlantic coast tomorrow, but it's still not clear if it will make landfall.

NHC's latest forecast is below, and you can follow Isaias' path here. 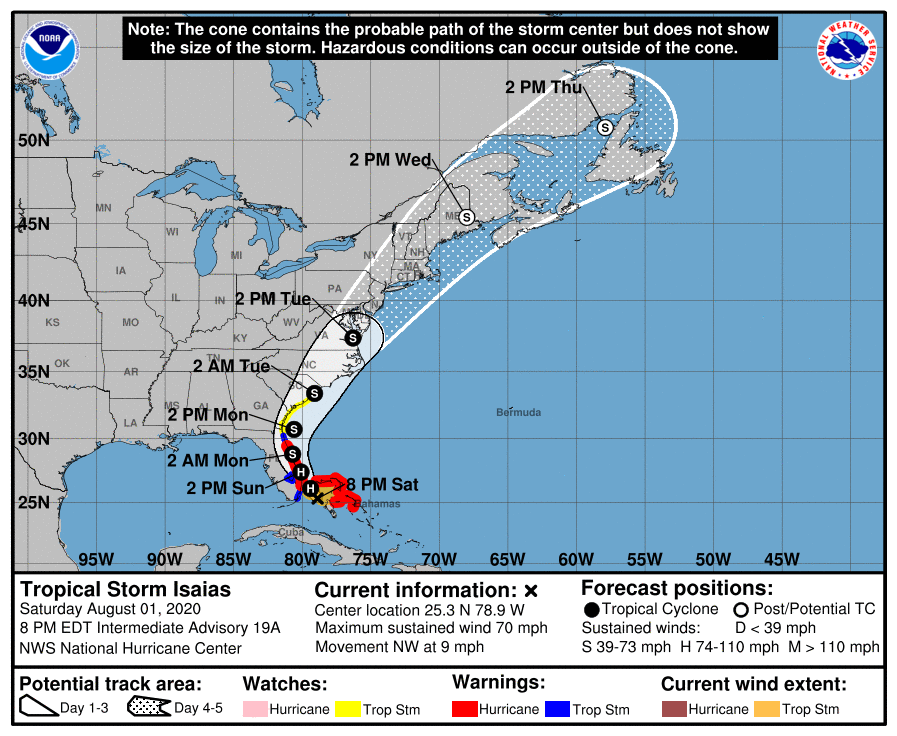 Isaias is the Atlantic's earliest on record to begin with an "I." The previous record was set on August 7, 2005, part of the busiest hurricane season to date.

Last month, the research team at Colorado State University forecasted there would be 20 named storms this hurricane season.

The only other time CSU researchers predicted 20 or more storms was in their August update of the record-breaking 2005 season.

As Tropical Storm Isaias heads toward Florida, Volusia County issued an evacuation order for the Barrier Island and people living in mobile homes near the coast, effective at 8 a.m. ET Sunday.

"We are just about 24 hours away from the onset of tropical-storm-force winds," Volusia County Manager George Recktenwald said in a news conference. "Depending on the track, the Barrier Islands can see category one hurricane-force winds at 75 miles an hour."

Recktenwald said that while this is a smaller storm, it is going to be much closer and might be right up on the coast.

"There is some fluctuation and has been, and will be as we monitor this storm. At times it falls down below hurricane-force winds and then a short time later it's back up in those 74 to 75 miles an hour wind range," said Judge.

Remember: While Isaias was downgraded to a tropical storm this afternoon, the National Hurricane center forecasts it will restrengthen into a Category 1 hurricane overnight.

Judge said they are expecting low-end hurricane-force winds right along the coast.

"The onset of sustained tropical-storm-force winds will occur approximately three o'clock tomorrow," he said. "The worst conditions will be 11 p.m., give or take an hour, Sunday night, and then through the night. Hopefully, clearing by seven o'clock Monday morning."

Shelters will open at 8 a.m. Sunday. For people who are Covid-19 positive, hotels will be available for them on the west side.

The ninth named storm of the year is headed for the Florida coastline, but unlike its predecessor, Hanna, this time the pronunciation isn't as clear — at least to non-native Spanish speakers.

But no sweat: We're here to explain just how to say the storm's name.

Isaias is pronounced ees-ah-EE-ahs, according to the Atlantic Basin Storm Name Pronunciations guide.

WFTV Meteorologist Irene Sans tweeted this video on just how to say it:

The forecast track as of this afternoon has Isaias' center moving within miles of Florida's east coast tomorrow. While Isaias was downgraded to a tropical storm this afternoon, the National Hurricane center forecasts it will restrengthen into a Category 1 hurricane overnight.

But a landfall in Florida can't yet be ruled out, CNN meteorologist Allison Chinchar said.

So what happens after that? The storm's center could affect the Carolinas' coast by early Tuesday — and current forecasts show a landfall over the coastal Carolinas is possible.

The storm then could move along the coasts of the mid-Atlantic and Northeastern states from Tuesday into Wednesday.

The governors of Florida, North Carolina and Virginia have declared states of emergency, allowing officials to move resources and equipment for recovery.

There are at least six Florida counties currently under a hurricane warning, Gov. Ron DeSantis said during a hurricane briefing today.

"We have hurricane warnings in effect from Boca Raton to the Volusia-Flagler County line, DeSantis said.

Sixteen counties in Florida have declared a state of emergency, the governor said.

"We will start seeing impacts from the storm tonight" and into Sunday, DeSantis said.

The National Hurricane Center is predicting a potential storm surge of two to four feet "from Jupiter Inlet all the way up to Ponte Vedra in Northeast Florida," said DeSantis. That’s a distance of nearly 300 coastal miles.

Remember: While Isaias was downgraded to a tropical storm this afternoon, the National Hurricane center forecasts it will restrengthen into a Category 1 hurricane overnight.

Here's the latest on watches and warning: 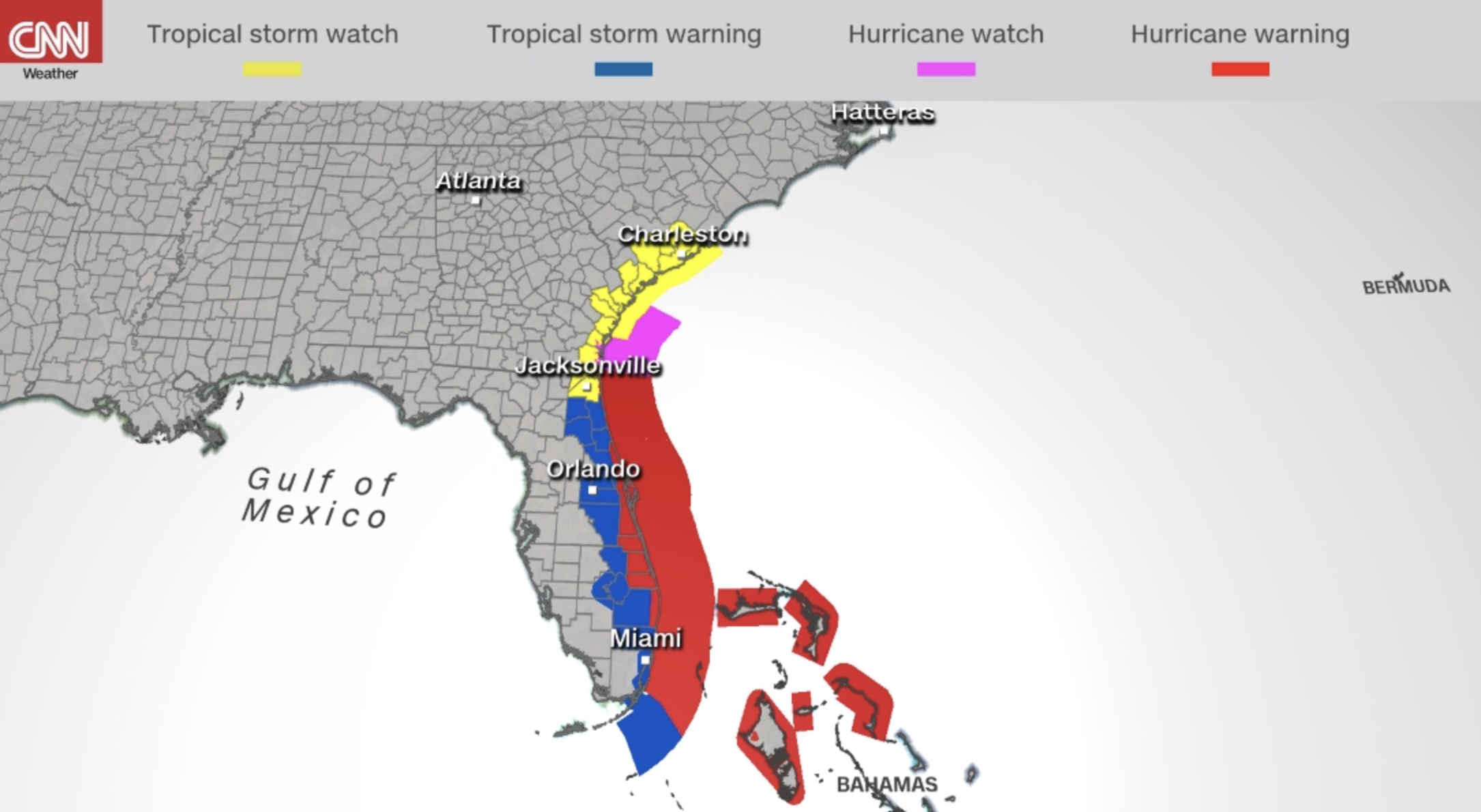 "You can pretty much be assured you are going to see power outages," DeSantis said during a Saturday afternoon briefing.

Isaias was downgraded to a tropical storm with sustained winds of 70 mph earlier today. However, the National Hurricane Center forecasts the storm will restrengthen into a hurricane overnight.

"A 70 mile an hour wind will be enough to take down trees and limbs that obviously interact with power lines and so, that will happen, and people should be prepared for that," DeSantis said.

Florida Power and Light have prepositioned workers in 16 staging areas on the east coast ahead of the storm, DeSantis said.

"FPL has nearly 10,000 workers deployed and ready to respond, including more than 6500 line and vegetation personnel," DeSantis said.

Isaias was downgraded from a hurricane to a tropical storm in the National Hurricane Center's 5 p.m. ET advisory. However, storm is forecast to restrengthen into a hurricane overnight.

The latest forecast shows Isaias continuing to move northwest toward Florida this evening. Tomorrow, it's expected to travel up Florida's Atlantic coast. Although it's unclear if it will make landfall, it is plausible that it will.

The latest forecast from the National Hurricane Center is below, and you can track Isaias here. 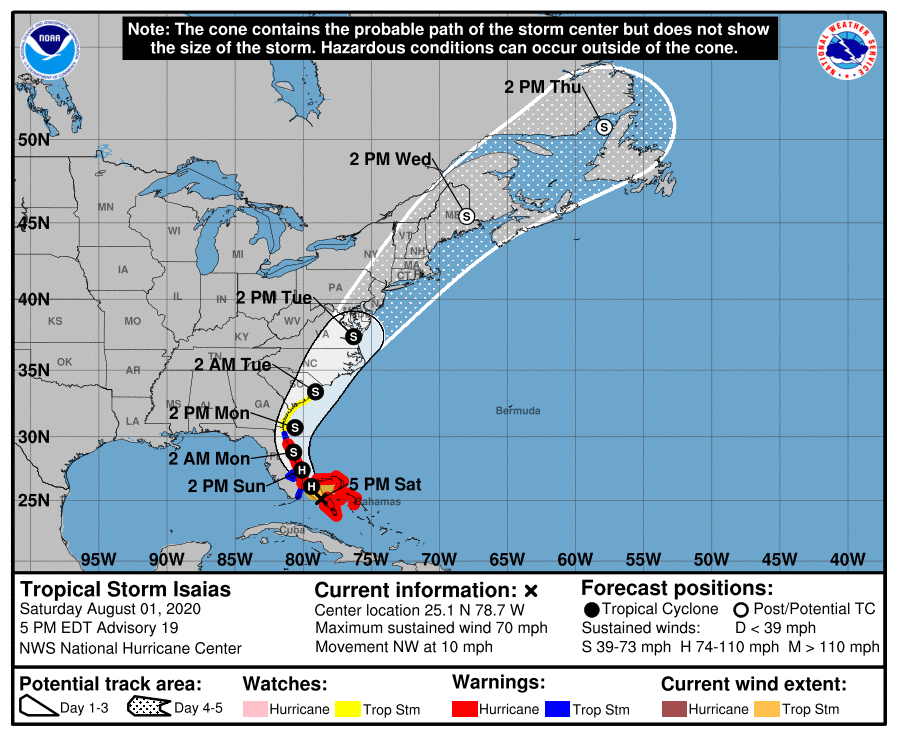 Isaias has weakened to a tropical storm, according to the National Hurricane Center.

The storm was a Category 1 hurricane as it moved through the Bahamas earlier today.

The National Weather Service said Isaias is "expected to re-strengthen to a hurricane overnight while it approaches the Southeast coast of Florida."