Hurricane Laura makes landfall in the US

Hurricane Laura, still a Category 4 storm, has made landfall near Cameron, Louisiana.

There are already "catastrophic storm surge, extreme winds, and flash flooding" taking place in some portions of the state, according to the National Hurricane Center.

The hurricane is now about 30 miles southwest of Lake Charles, Louisiana, and about 40 miles east of Port Arthur, Texas.

Maximum winds are still a devastating 150 miles per hour, and the hurricane itself continues to move north at 15 mph.

The storm is expected to move inland across southwestern Louisiana over the coming hours, then head north across the state on Thursday afternoon. The center of the storm will then move over Arkansas and the mid-Mississippi Valley on Friday, then reach the mid-Atlantic states by Saturday.

Power outages in Louisiana and Texas are continuing to climb in the early hours of Thursday morning, as Hurricane Laura inches closer to the Gulf Coast.

There are now more than 103,000 customers without power in both states, according to PowerOutage.US.

In Port Arthur, Texas, the majority of residents have evacuated, Mayor Thurman Bartie said on Wednesday night, warning that emergency services won't be able to help those left behind when the storm fully hits.

"My main priority is really to get all citizens out of homes. Thank God, we probably got 70, almost 80% of our citizens out, actually evacuated," he told CNN.

The mayor called a mandatory evacuation order on Monday, he said.

"There are still some who have remained, and they know that they are actually on their own because there's no emergency services available to them during this particular period of time. But we are now just awaiting arrival."

Winds in the area are already reaching 40 to 50 miles an hour, and the rain is intensifying, but "the full brunt of it has not even arrived yet," he said.

"Thank God our citizens, the majority of them, have gotten out. We appreciate that."

The storm's effects are already being felt in Lake Charles, Louisiana, CNN correspondent Martin Savidge reported from the scene.

Lake Charles is 30 miles from the coast -- but the storm surge is projected to go 40 miles inland, meaning the community could face heavy flooding and up to 12 feet of water, Savidge said.

A storm surge is a "complete displacement of that amount of water," said CNN anchor Chris Cuomo, who added that he grew up experiencing these types of storms and conditions.

"So it's not just that it gently comes in -- you get literally like a wall of water that winds up submerging things instantly. You can't drive out. The ground there is very easily saturated, which means it can't take much. The water has nowhere to go, people are trapped, and we know what happens then," Cuomo said.

The eyewall of Hurricane Laura is now moving onshore over southwestern Louisiana, the National Hurricane Center said in its latest warning.

The eyewall is the area around the eye, and is the strongest portion of a hurricane.

"TAKE COVER NOW! Treat these imminent extreme winds as if a tornado was approaching and move immediately to the safe room in your shelter. Take action now to protect your life!" the advisory warned.

It added that the safest place to be when the hurricane makes full landfall is a reinforced interior room away from windows.

"Get under a table or other piece of sturdy furniture. Use mattresses, blankets or pillows to cover your head and body. Remain in place through the passage of these life-threatening conditions," the center said.

Conditions along the Louisiana coast have further deteriorated; in Cameron, wind gusts have kicked up to 93 mph, and gusts in Calcasieu are measuring 89 mph.

Lake Charles reported a wind gust of 74 mph, but the strongest winds are still an hour or two away from reaching the city.

Hurricane Laura is only a few hours away from landfall -- but there are still many people who have stayed behind in Louisiana despite mandatory evacuation orders.

"We did everything humanly possible to get the message to people, and for individuals that don't even have the financial means to pick themselves up and evacuate, we did provide transportation via our municipal buses and coordinate the state of Louisiana," Mayor Nic Hunter of Lake Charles told CNN on Wednesday night as the hurricane approached.

"We ran that all yesterday and even this morning. I do fear that not enough evacuated, and I'm very concerned about not only the survival aspect of the storm itself, but also the aftermath."

Hunter added that it's difficult to estimate how many people stayed in Lake Charles, but fewer seem to have evacuated than during the devastating 2005 Hurricane Rita.

"If you are not where you are supposed to be and that water hits, you will drown. There is no way to survive that," he said. "I'm very afraid (for) the people that did not evacuate."

Louisiana Gov. John Bel Edwards warned today that parts of the state will be submerged underwater from Hurricane Laura.

“The surge is going to inland, they predict, there will be parts of Lake Charles underwater that no living human being has ever seen before,” he said in an interview with WWL Radio.

“We are marshaling all of our people and assets to go in tomorrow and start a very robust search and rescue effort,” Edwards added. “We’ve brought in search and rescue teams from other states, such as Tennessee, for example.”

“The first thing about tomorrow is all about saving lives and of course we will be transporting a lot more people to shelters initially and ultimately to hotel and motel rooms." 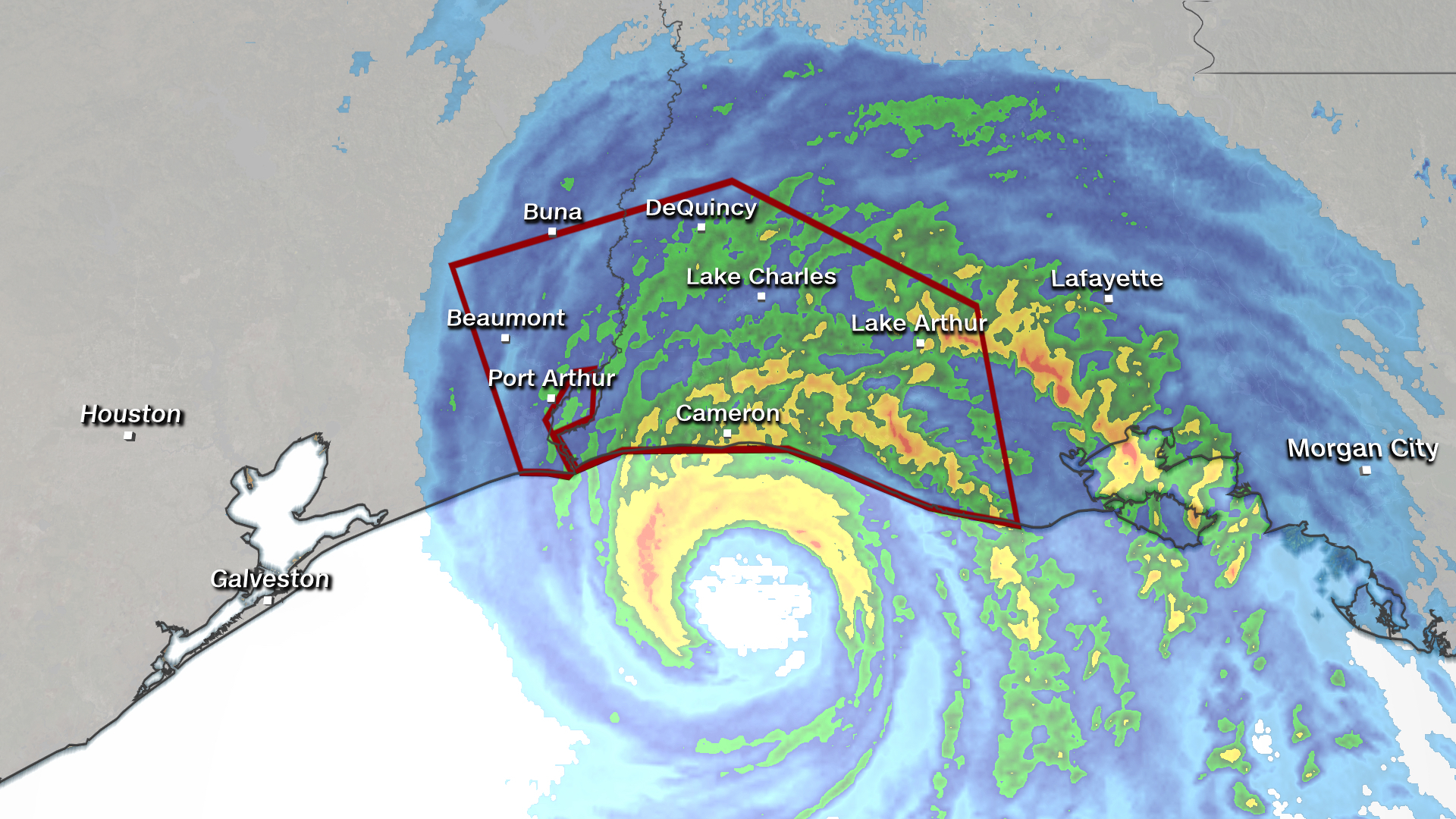 A rare “extreme wind warning” has been issued by the National Weather Service office in Louisiana.

Extreme wind warnings are issued when winds that are not associated with a tornado or other thunderstorm event are expected to exceed 115 mph, such as in a major hurricane.

The warning covers Lake Charles, Beaumont, Port Arthur and other nearby locations in extreme southwest Louisiana and southeast Texas, until 2 a.m. ET.

Residents in these locations are warned to ”take cover now and to treat these imminent extreme winds as if a tornado was approaching and move immediately to the safe room in your shelter.”

The hurricane eyewall is nearing the coast of Louisiana, the National Hurricane Center warned in their 11 p.m. ET update.

The center warned that there will be "catastrophic storm surge, extreme winds, and flash flooding expected tonight and early Thursday."

Most Cameron residents have evacuated, though some remain. About 100,000 residents in Calcasieu Parish, where Lake Charles is located, could face possible flooding.

The hurricane's maximum sustained winds remain at 150 mph, as it moves toward the coast at roughly 15 mph.