A 2-year-old toddler is one of at least seven people killed after heavy rainfall in New York City, according to police.

The victims include a 48-year-old woman, who was found by New York City Police Department (NYPD) officers in her home in the Grand Central Parkway area of Queens, after she called 911 because of flooding conditions. The woman was taken to Forest Hills Hospital by EMS where she was pronounced dead.

Two additional victims in Queens were found by officers Wednesday night around 183rd Street, NYPD said. A 45-year-old woman was taken to Queens General Hospital by EMS where she was pronounced dead. A 22-year-old man was pronounced dead at the scene.

A 50-year-old man, a 48-year-old woman and the 2-year-old male child were all pronounced dead at the scene of their 64th Street residence after NYPD officers responding to a 911 call of flooding arrived to find them unconscious and unresponsive.

In Brooklyn, police officers found a 66-year-old man in his home on Ridgewood Avenue, Wednesday night when they were responding to a 911 call reporting flooding. He was pronounced dead at the scene.

All of the victims were located between 10 p.m. ET and midnight on Wednesday night, the NYPD said.

In Passaic, New Jersey, Mayor Hector Lora told CNN's Don Lemon that the body of an elderly man in his 70s was retrieved from flood waters after the vehicle he was riding in was overtaken by water and firefighters were swept under the vehicle making it nearly "impossible" for them to reach him.

The remnants of Hurricane Ida have caused dangerous flash floods and tornadoes across the northeastern United States, including across New York, New Jersey and Connecticut.

States of emergency have been declared in New York and New Jersey due to the storms. These are the rarest of weather alerts, and only reserved for when you have life-threatening flooding and water rescues, and catastrophic flooding taking place.

It has never been issued for New York City before, according to CNN meteorologist Pedram Javaheri.

At least eight people have been killed in storm-related deaths. The New York City Police Department (NYPD) reported seven fatalities in the city and the Mayor Hector Lora reported at least one death due to flooding in Passaic, New Jersey.

There has been an unprecedented amount of rainfall by any metric, Javaheri said. The storm prediction center had warned of a level 4 rainfall -- the highest risk for excessive rainfall.

Portions of Rhode Island, Connecticut and Massachusetts will soon see the last bit of thunderstorm activity, as Ida pushes away from the US over the next several hours, Javaheri added.

More than 300 flights were canceled out of Newark International Liberty airport as Newark sees its wettest day in recorded history, Javaheri reported.

At least eight people have been killed in storm-related deaths in New York and New Jersey according to reports from the New York City Police Department (NYPD) and the Mayor Hector Lora of Passaic, New Jersey.

The NYPD is reporting seven fatalities in New York City and Lora reported at least one death due to flooding in Passaic.

Fuel is in short supply in Louisiana, where many residents are relying on gas-powered generators in the wake of Hurricane Ida's destruction, and the shortage is slowing the long and complicated recovery efforts, Gov. John Bel Edwards said.

More than 960,000 customers are still without power in the state, according to PowerOutages.US. And those in the hardest-hit areas could experience outages for weeks, the regional electric utility Entergy has warned.

As of Tuesday, as many as eight refineries were down, with one or two coming back up Wednesday, Edwards said, and the state is working with federal partners and with the business community to identify ways fuel can be brought into the state.

Fuel problem hampering recovery: When Ida slammed into the Gulf Coast on Sunday, the 16th anniversary of Hurricane Katrina, it was a Category 4 hurricane. It has since downgraded to a tropical depression and moved north, where its remnants caused heavy flooding Wednesday.

There have been at least five confirmed deaths tied to the hurricane.

As officials sift through the wreckage to assess damage, rescue residents and store infrastructure, the fuel problem is "impacting all of our recovery efforts," Edwards said. 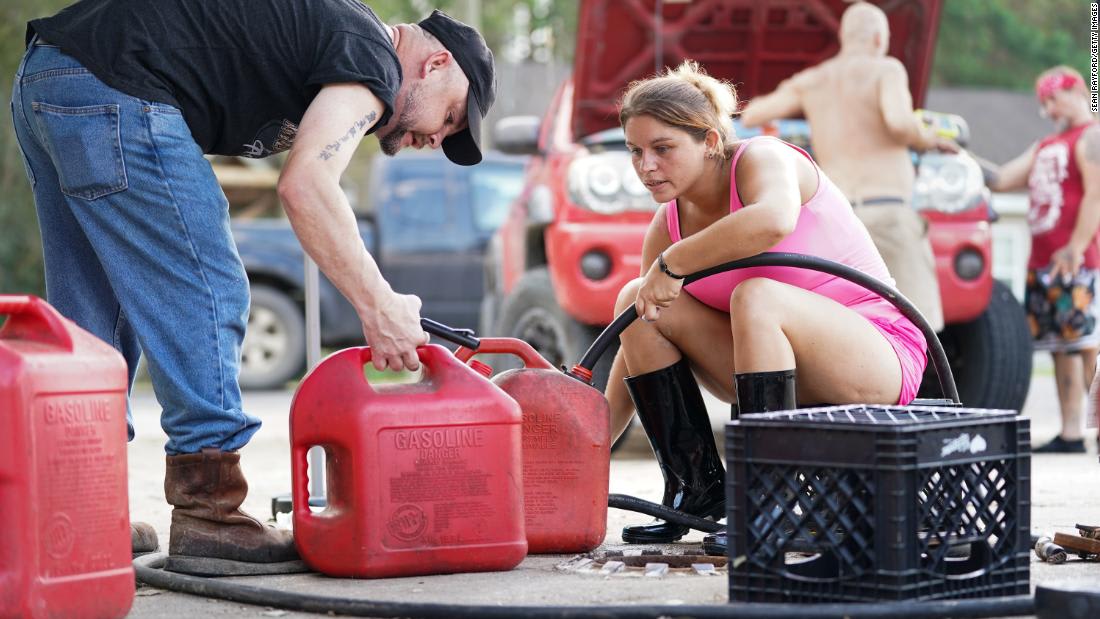 Fuel is in short supply in Louisiana, which is a critical problem for the Hurricane Ida recovery effort, governor says

The remnants of Ida brought record levels of rain to the mid-Atlantic and northeast United States. Here are some of the records that fell:

Heavy rains in some areas of the northeastern United States has lead to delays and cancellations for Amtrak, a spokeswoman for the passenger rail service said.

"Due to weather issues along the Northeast Corridor, we do have a few trains that are significantly delayed or were canceled overnight. We continue to closely monitor and as of now, have not made any service adjustments for morning service," said the spokesperson, Christina Leeds.

Earlier in the morning, the Amtrak Northeast Twitter account also posted about lengthy delays of trains between Philadelphia, Pennsylvania and New Haven, Connecticut, because of the severe weather conditions.

Extreme rainfall rates like those seen in New York and New Jersey, as well as other recent extreme rainfall events in Tennessee, Germany and China, are becoming more common because of human-caused global warming, scientists say.

A recent UN climate report stated, “the frequency and intensity of heavy precipitation events have increased since the 1950s over most land area.”

In the US specifically, the heaviest downpours have been observed to be increasing in all regions of the continental US, with the Northeast US showing the largest increase, according to the US National Climate Assessment.

"Warmer air can contain more water vapor than cooler air. Global analyses show that the amount of water vapor in the atmosphere has in fact increased over both land and oceans," the report says.

One resident said she heard the tornado approaching then saw all her backyard furniture swept away by the winds.

The United States Tennis Association is working with New York authorities to identify routes to get fans home from the US Open, according to spokesperson Chris Widmaier.

The USTA is sending vehicles out to look for routes away from the venue at Flushing Meadows, Queens, according to Widmaier.

“Our goal is to get people out safely,” he said.

Limited train services are running from stations near the venue, Widmaier said.

The US Open, tennis' final major tournament of the year, is scheduled to run until September 12.