Alexander Sandoval ran with his son soon after hearing gunshots at the parade in Highland Park, Illinois, eventually hiding his son in a dumpster while he went back to find other family members, he told CNN affiliate WLS.

“I thought that it was the Navy that was saluting the flag with rifles, but then when I saw people running, I picked up my son and started running,” Sandoval said. “… We ran behind the building and I put my son in a dumpster and he sat there with his dog, and I went back to look for the rest of my family.”

Sandavol said he left his son with someone hiding behind the dumpster while he went to find the rest of his family who had also run away when the shooting started.

“I went back. There was a few people shot on the ground and there was a little boy that was in one of the police officers arms and that's that was the worst experience ever. Because, you know, all I thought about was my son and I can only imagine what that family is going through,” he told WLS.

Jacki Sundheim has been identified by her synagogue as one of the six people killed in the Fourth of July parade shooting in Highland Park, Illinois.

The North Shore Congregation Israel in Glencoe, Illinois, said in a statement that Sundheim was a lifelong congregant of the synagogue and a member of staff, having been a preschool teacher and events coordinator.

“There are no words sufficient to express the depth of our grief for Jacki’s death and sympathy for her family and loved ones,” the statement said. “We know you join us in the deepest prayer that Jacki’s soul will be bound up in the shelter of God’s wings and her family will somehow find comfort and consolation amidst this boundless grief.”

Shortly after 10 a.m. CT Monday, a gunman began firing into a crowd of people attending a Fourth of July parade in Highland Park, Illinois, just north of Chicago. Six people were killed and dozens were wounded, officials say, and the suspect was later apprehended by police following a brief vehicle chase.

A day after gun violence rocked yet another American community, witnesses are processing the traumatic event and investigators are piecing together how it happened.

Here are the latest developments in the Highland Park parade shooting:

Suspect apparently posted violent imagery online: The suspected gunman, Robert E. Crimo III, posted music on several major streaming outlets and on a personal website under the name "Awake the Rapper," featuring animated scenes of gun violence and ominous sounding lyrics. In one music video titled “Are you Awake,” Crimo is seen with multicolored hair and face tattoos and is narrating, “I need to just do it. It is my destiny.” The video shows a cartoon animation of a stick-figure man -- who resembles Crimo -- in tactical gear carrying out an attack with a rifle. The videos appear to have been posted online last year.

Suspect’s uncle saw no warning signs, he says: An uncle of the suspect told CNN he saw no warning signs that would prompt him to believe his nephew would have been involved in such a tragedy. “I’m heartbroken. I’m so heartbroken,” Paul A. Crimo said, expressing remorse for the families of the victims and adding he spoke at length to law enforcement Monday about his nephew. The suspect lives in an apartment behind the house owned by his father, Paul said, adding that he last saw his nephew Sunday evening looking at his computer and not acting out of the ordinary.

Senator says more must be done: Sen. Dick Durbin of Illinois, the Senate majority whip, touted the recently passed bipartisan gun bill as an important step to combat gun violence, but said there are things the legislation didn't address. “There is no reason for a person to own a military assault weapon. It has no value for hunting, or sports or even self-defense,” he said. "It is a killing machine." The gun used in Monday's shooting was a "high-powered rifle" and the attack appeared to be "random" and "intentional," said Christopher Covelli, spokesperson for the Lake County Major Crime Task Force.

Larry Bloom, a Highland Park resident of 15 years, told CNN he had cycled to the parade and was standing just to the right of a bandstand when he heard a "pop, pop, pop."

"Then it just opened up. Just a rain of gunshots, just so quickly, for quite a while, at least it seemed," Bloom said. "Then everybody just got up, turned and ran and tried to get behind something."

It was early in the celebrations and there were a lot of people present, Bloom said: "Just imagine a full audience for a parade, it was that many people. It was hundreds of people just in that area -- just all running in the same direction," he said.

The shots felt like they were coming from across the street and aimed at the area of the crowd he was in, Bloom said, though it was hard for him to establish where the gunman was.

"It was right on top of us," he said. "From a rooftop wouldn't be unimaginable."

Police have said firearm evidence was found on the rooftop of a nearby business.

When the gunshots stopped and it cleared out and the police moved in, most people left the area, Bloom said.

"Over the years, considering the temperature of this country and some of the demographics of our town here, every year I'm surprised -- and thankful -- that it hasn't happened yet.
"And after I got to a safe space and I was able to get a few seconds of breath, I really just thought, 'Yup, see, it finally happened here, this is ours.' It's disappointing, but I'm surprised it took this long, which sounds awful," Bloom said.

Read more about the aftermath of the shooting here: 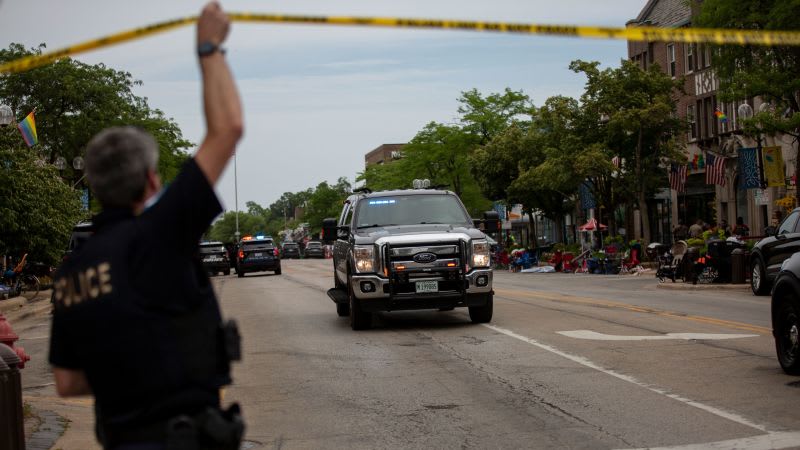 Following Monday's deadly mass shooting at a parade in nearby Highland Park, many of Chicago's sports teams gave statements expressing their sympathies to the victims and community.

MLB's Chicago White Sox canceled a planned post-game fireworks celebration Monday due to the shooting and held a moment of silence before they took the field against the Minnesota Twins.

Other teams that posted statements of support include, in part:

CNN's Jill Martin and David Close contributed to this post.

Steve Tilken told CNN he sheltered in a store basement with his wife, her two grandchildren and dozens of others as police scoured the area for the gunman during Monday's shooting.

The Highland Park resident told CNN he initially thought someone was letting off a series of fireworks, but his wife's 13 year-old granddaughter had undergone active shooter training at school and "all of a sudden hit the ground sobbing." She also brought her brother to the ground, Tilken said.

"My wife just stood there -- was standing for like a second or two -- and then she realized what was going and so she dove down to protect their bodies with her body and I stood for another like couple of seconds in disbelief because I didn't see the carnage that was happening aback of me. And I threw my body on top of theirs," he said.

Tilken said they ran into the nearby store when he realized they were unprotected and in the line of fire.

"We were just sitting ducks right there and one bullet could pass through all of our bodies," he said.

Around 20 people were sheltering in different areas of the basement, including two women who appeared to have minor injuries from bullet grazes, Tilken said.

"My wife's granddaughter, she was shaken but in the basement, she, you know, tapped into some inner resources and was trying to be helpful to people with young kids and helping keeping the kids entertained and actually helping the two woman that had some of the minor wounds," Tilken said.

He said he went out of the store at one stage to try to see what was happening and saw a body "in a pool of blood," about eight feet from where he was standing.

Police carrying assault weapons later entered the basement looking for the shooter, Tilken said, and then brought a doctor to assess those with injuries. 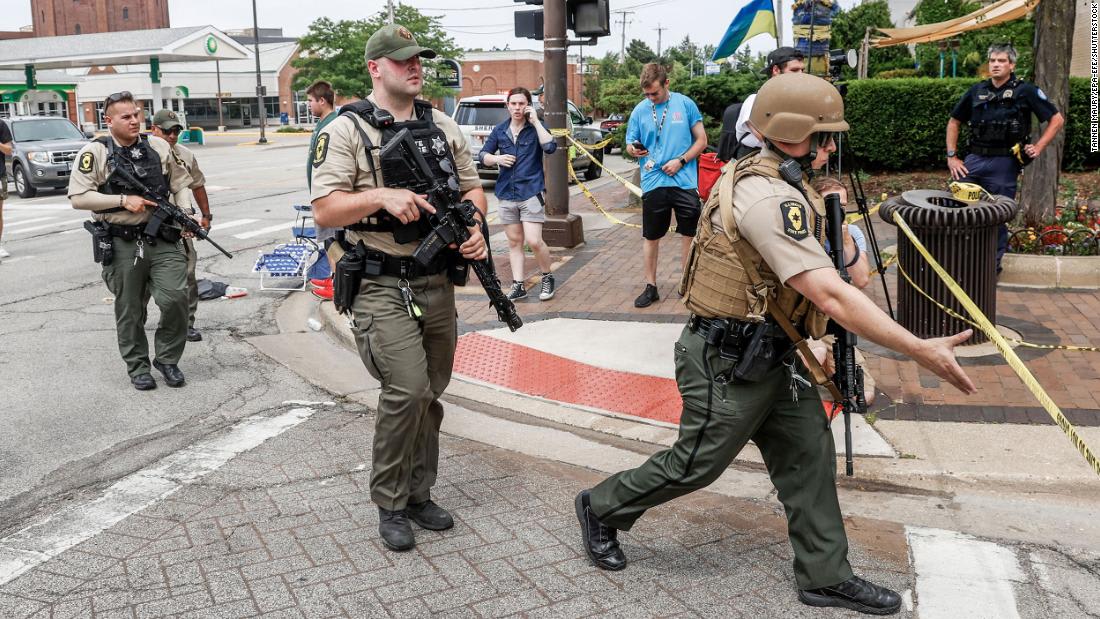 A day of national celebration turned to tragedy Monday when a gunman killed six people and injured dozens of others at a July Fourth parade in Highland Park, Illinois -- leaving the nation grieving yet another mass shooting.

Bystanders initially thought the sound of gunfire that pierced the sunny parade just after 10 a.m. CT along the town's Central Avenue, about 25 miles north of Chicago, was fireworks, until hundreds of attendees started to flee in terror -- abandoning strollers, chairs and American-flag paraphernalia strewn on the streets.

Eyewitnesses described grabbing their children and families and running for their lives, some hiding behind dumpsters or in nearby stores for safety amid the chaos. One parade-goer described seeing a girl shot and killed, another saw a man shot in the ear with blood all over his face.

"It looked like a battle zone, and it's disgusting. It's really disgusting," Zoe Pawelczak, who attended the Independence Day parade with her father, said.

Read more about what happened at the parade here:

Six people were killed Monday after a gunman opened fire at a Fourth of July parade in Highland Park, Illinois, authorities said.

Five of those who were killed died at the scene, all of whom were adults, said Lake County Coroner Jennifer Banek. Another person died after they were transported to a local hospital, she said. Authorities are working to notify the victims' families and have not publicly identified those who were killed.

A total of 26 patients were received at Highland Park Hospital, according to Dr. Brigham Temple, medical director of NorthShore University Health System. Of those tended to at that location, 25 sustained gunshot wounds, Temple said. Ten of those treated arrived by ambulance, he said, and 19 of the 25 gunshot victims have been discharged.

The patients there ranged in age from 8 years old to 85 years old, according to Temple, and four or five of the patients were children.

Five others were transported to Evanston Hospital, according to spokesperson Jim Anthony with the NorthShore University Health System.

President Joe Biden began Independence Day by sharing a message that looked to the country's future, but quickly had to respond to another mass shooting in the United States.

"Jill and I are shocked by the senseless gun violence that has yet again brought grief to an American community on this Independence Day," the President said in a statement Monday after at least six people were killed in a shooting in Highland Park, Illinois, during a July Fourth parade.

Biden noted that he had "surged Federal law enforcement to assist in the urgent search for the shooter," and pointed to the gun safety legislation he recently signed into law.

"But there is much more work to do, and I'm not going to give up fighting the epidemic of gun violence," Biden added.