Isaias lashes the US East Coast

Our live coverage has ended, but you can follow Isaias' path here.

Tropical Storm Isaias raced up the East Coast today. Here's what you need to know about the storm's destructive path:

“Some of these outages may last for a few days due to the severity of the storm,” Murphy noted. “We are working closely with the utilities to restore power as quickly and safely as possible.”

As Tropical Storm Isaias continues to bear down along the East Coast, there are nearly 2.7 million customers from North Carolina to Connecticut without power, according to PowerOutage.US as of 2:45 p.m. ET.

Here's a breakdown of impacted areas:

Sal Aquilina had been hunkering down in his Brooklyn apartment, riding out Tropical Storm Isaias.

"Heard a giant crash, came out to see this," he said in a video he took.

The building across his street collapsed. In the video, members of the New York City Fire Department are seen responding on scene. 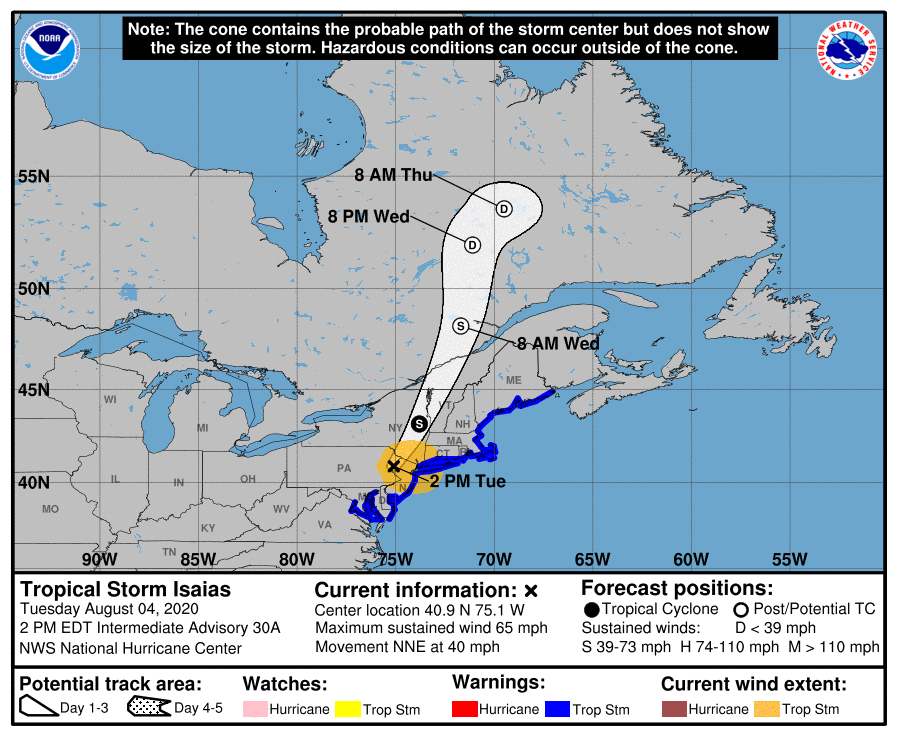 Two people have been rescued from flash flood waters resulting from from Tropical Storm Isaias in Charles County, Maryland, according to a Fire and EMS official.

Bill Smith, Charles County volunteer fire and EMS public information officer, said 911 dispatch received a call at 8:45 a.m. ET Tuesday that at least one car had been swept off Brandywine Road during heavy rainfall and flash flooding over the Swanson Creek Bridge.

“This bridge is notorious and floods every time it rains,” Smith told CNN Tuesday. “This was one of worst flooding occurrences given the amount of rain we got this morning.”

Smith said the Charles County Dive Team and Hughesville Volunteer Fire Department responded and were able to confirm two vehicles had been swept 15 to 75 feet off the road.

“One individual, a female, was hanging from tree limb and male was found on the roof of car,” Smith said. “An air boat from 10th District Fire Station arrived on scene and made gallant effort to get into the water and were successfully able to take male off car and return for female.”

Smith said there were no injuries and both people refused transport.

In addition to the flash flooding on Brandywine Road, Smith said there are also trees down and additional flooding on roads. He noted that the Charles County Fire Department and EMS has responded to between eight and 10 additional calls of people driving through swift water and requiring assistance.

“We continue to ask people not to do it but low and behold each time it flood, we have to go rescue people,” Smith said.

Where things stand in other parts of the state: Parts of Southern Maryland have seen at least one tornado, flash flooding, downed trees, and water rescues as well, Smith said.

No fatalities have been reported across the four Maryland counties that CNN has been in touch with as of Tuesday at 1:30 p.m. ET.

Strong wind gusts are being measured around New York City this hour, with multiple metro airports reporting gusts from 60 to 70 mph.

While initial reports are always unofficial, these would be the strongest winds since Superstorm Sandy in 2012, and could end up exceeding gusts experienced with that storm.

Here's where some of the gusts were recorded:

Additionally, a 109-mph wind gust occurred at Long Beach Island, New Jersey, shortly before 11 a.m. ET. This was the result of a reported waterspout hitting the weather station.

Power outages are also climbing quickly, with more than 2 million customers without power, according to Poweroutages.us.

A second storm-related death has been confirmed in Bertie County, North Carolina, after a tornado touched down at a mobile home park overnight, according to a news release from the county.

The tornado touched down just after 2 a.m. ET at the Cedar Landing mobile home community in Windsor, North Carolina, the release stated.

Task force teams are on the ground assisting in the search and rescue efforts, the county said.

According to CNN affiliate WCTI, three people remain unaccounted for.