The latest on Kenosha police shooting of Jacob Blake

President Trump announced on Tuesday that his administration would be providing millions of dollars in funding toward law enforcement, public safety resources and small business relief in Kenosha and the state of Wisconsin.

“I’m committed to helping Kenosha rebuild. We will provide $1 million dollars to the Kenosha law enforcement so that you have some extra money to go out and do what you have to do,” Trump said during a public safety roundtable in Kenosha.

“I’m also providing nearly $4 million dollars to support the small businesses that I talked about today that got burned up, burned down. And we’re going to be providing over $42 million dollars to support public safety statewide, including direct support for law enforcement and funding for additional prosecutors to punish criminals, and resources to provide services to victims of crime,” he added.

The $42 million, Trump said, was funding Attorney General Bill Barr was pushing for.

President Trump spoke and took a few questions during his tour of the command center in Kenosha, Wisconsin.

Trump said he would meet Jacob Blake’s family pastor while he’s in Kenosha.

Some background: Yesterday, Blake’s father told CNN that the family does not have a pastor, but multiple administration officials have said that the White House has been in contact with Blake’s mother’s pastor.

“I’m going to meet him in a little while. He represents the family. And I think it’s probably better off if it’s handled locally right now,” Trump said. “It’s under investigation as you know, so I think it’s much better – I actually suggested we handle it locally.”

It’s not clear if the President is referring to the meeting with Blake family representatives.

Trump said he looks “forward to” meeting with the pastor.

“This is going to heal very quickly,” Trump said, of the overall situation in Kenosha. “We’re going to help them from an economic standpoint.” The President continued speaking, but the rest of his comments were cut out due to signal issues.

As he left the White House this morning, Trump said he's visiting the city to show support for the National Guard and local law enforcement. His first stop after landing was to visit a building that had been damaged in the protests.

The city's uptown strip is fairly damaged, as are some parts of the downtown area near the courthouse. Pictures from one street of downtown showed several boarded-up businesses, but an otherwise calm scene. 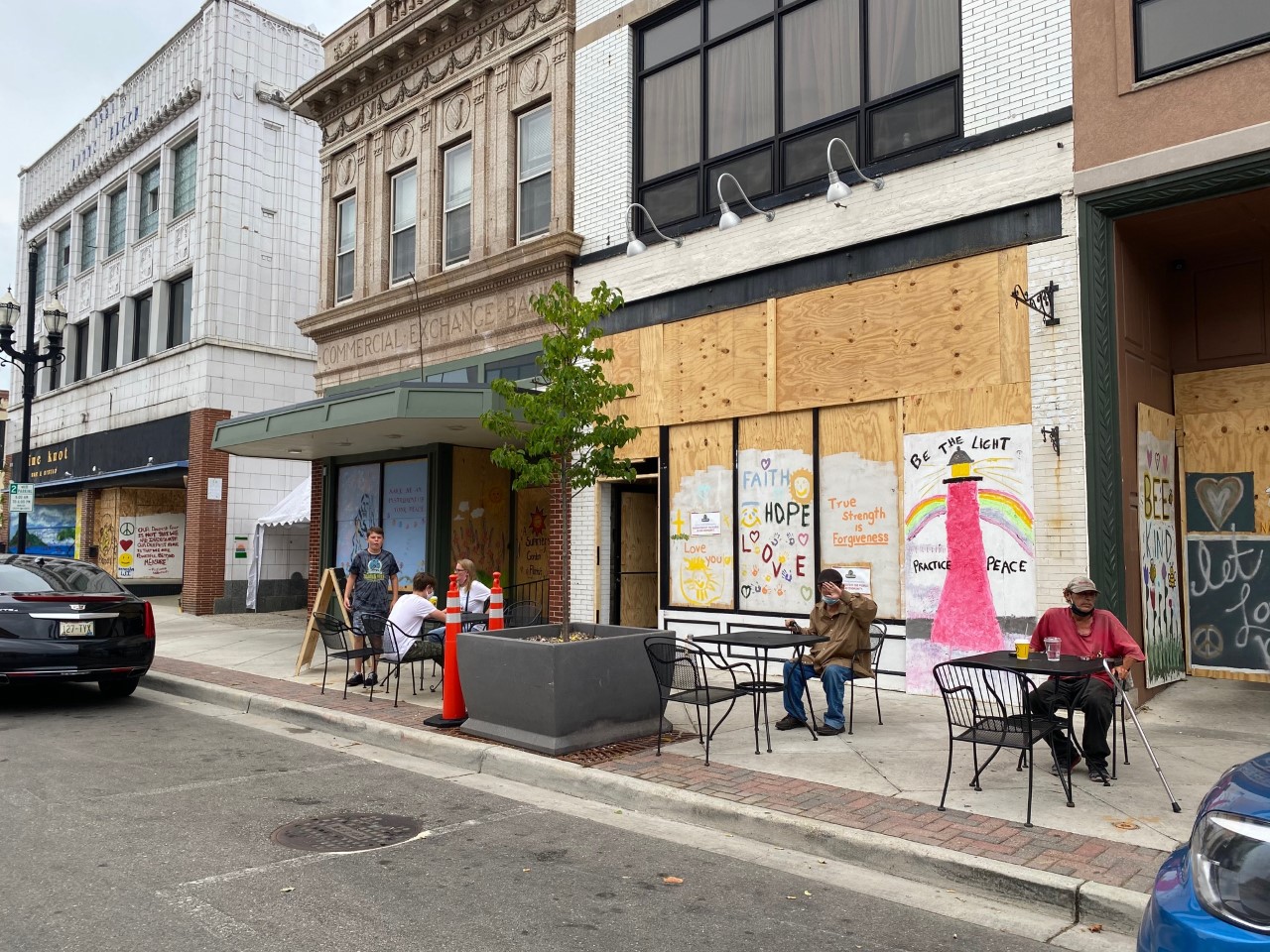 And in many of the city's neighborhoods, it's business as usual.

Things appear in order near Bradford High School, where President Trump is scheduled to visit later today. The school is just a few blocks from where Jacob Blake was shot — and the Blake family is hosting a community event at the site today. There are bouncy houses for children to play and a BBQ for the community.

Remember: Trump said he’s not planning to meet with Blake’s family during the visit because they wanted to involve lawyers.

Here's what it looks like at the community event today:

The President’s motorcade entered Kenosha city limits at 12:50 p.m. local time, or 1:50 ET, according to the press pool traveling with him.

The first stop will be to inspect damaged property.

According to the press pool, along the entire route was a mix of people waving Black Lives Matter signs and many Trump supporters waving Trump 2020 signs. Essentially every intersection had a gathering of people.

President Donald Trump stepped off Air Force One moments ago. He was accompanied by Attorney General William Barr and acting Department of Homeland Security Secretary Chad Wolf. None of the men wore masks or face coverings.

The President made brief remarks to pool cameras, saying he would be “making a couple of stops.”

“We’ll look at some of the damage that was done, “ Trump told reporters on the tarmac. “We’re going to get it fixed up. We’re going to help the people rebuild their businesses in Kenosha. It’s just been a great state. Great people. And we’re getting in straightened out.”

“The violence has stopped from the time the National Guard came,” he continued. “I mean literally when they set their foot on this location it stopped.”

Trump said he would also attend a roundtable and would “have plenty to talk about during the day.”

He's now on his way to Kenosha, which is about a half-hour drive away.

Family and friends of Jacob Blake had strong criticism for Donald Trump at a news conference held shortly before the President is set to visit Kenosha, Wisconsin.

“We know why Trump is here in Kenosha today […] He is here to sow chaos and fear —we reject these attempts to divide us,” Tanya McClean, a Kenosha resident and friend of the Blake family who helped organize the event, said at a press conference this afternoon.

“President Trump is trying to stir up more division and chaos,” McClean added.

“We don’t need more pain and division from a President set on advancing his campaign at the expense of our city,” said Justin Blake, uncle of Jacob Blake, in an earlier statement for the event.

“We need justice and relief for our vibrant community.”

McLean said that the President has failed to “address the growing unemployment crisis and the state sanctioned violence that denies black Americans our rights to freedom and a safe and healthy life.”

“Republicans in DC and here in Wisconsin have failed us,” McLean said at the press conference provided to CNN by affiliate WTMJ.

“We still don't have care, safety, and support, every one of us needs.”

President Trump is on his way to Kenosha, Wisconsin, which has seen nightly protests since the police shooting of Jacob Blake, a 29-year-old Black father.

According to Trump's public schedule, the President is expected to begin his trip soon with a visit to a "property affected by recent riots."

He's then scheduled to visit a local high school and the city's emergency operations center.

Before departing Kenosha, he'll participate in a roundtable focused on community safety.

What's not on his schedule: The President isn't expected to meet with the family of Jacob Blake, the man was shot in the back seven times by a police officer. Trump claimed that he's not meeting with Blake's family during his Wisconsin visit because they wanted to involve lawyers.

Wisconsin Gov. Tony Evers announced that businesses that suffered damage in Kenosha over the last week will be eligible for up to $20,000 in no-interest loans to help cover repair costs in a statement today.

The loans will be offered by the Wisconsin Economic Development Corporation’s “Disaster Recovery Microloan Program.” The organization has allocated up to $1 million in funding for the effort, according to the statement.

“These funds will provide immediate aid to the businesses that suffered losses over the past week and serve as a first step toward rebuilding and healing the divisions that have caused so much fear, pain, and devastation,” Evers said in the statement.

“We are prepared to be right there with them every step of the way as we rebuild the physical damage and address the critical issues of equity and justice in our communities and state,” Evers added.

Businesses will be able to use the money for cleanup and restoration services, operating expenses, temporary space, payroll, and repair and reconstruction work, the statement explained.

The Kenosha Area Business Alliance will administer the loans and field applications from impacted businesses, the statement said.

President Trump claimed Tuesday that the press is more to blame for fueling ongoing demonstrations across the country than his Democratic opponent, Joe Biden.

After claiming without evidence once again that a planeload of violent criminals dressed in black flew together to stir up civil unrest, Trump spoke about ongoing protests.

“I think a lot of people are looking at what’s happening in these Democrat-run cities and they’re disgusted. They see what’s going on and they can’t believe this is taking place in our country. I can’t believe it either. One of the reasons I’m making a trip today and going to Wisconsin is we’ve had such a big success in shutting down what would be … a city that would have been burned to the ground by now,” Trump claimed, adding, “And it all stopped immediately upon the National Guard’s arrival,” Trump said on the tarmac of Joint Base Andrews ahead of his departure to Kenosha, Wisconsin, the site of recent anti-police brutality demonstrations.

Then the President laid into the media for its coverage of demonstrations.

“You people, I tell ya, if we only had an honest press in this country. It would be much more advanced. But we have a very dishonest press,” he said, later adding, “The press should be ashamed of themselves. I think the press, the media is what’s fueling this, more so than even Biden, cause Biden doesn’t know he’s alive.”