Davide Giudici, a friend and former childhood teammate of Kobe Bryant, spoke to CNN today about the passing of the NBA legend.

Giudici played with Bryant in the 1990s in the small Italian city of Reggio Emilia. As 11 and 12-year-olds, they practiced several days a week together on Cantine Riunite, a junior basketball team named for a local winemaker of region’s signature sparkling red.

"We had a strong team, but he was better than all of us. At 11 years old, he was already very secure in his power and what he would become,” Giudici, 41, told CNN. “I mean, I think we knew he was going to become a professional basketball player. We didn’t know then that he was going to be one of the biggest stars in the world.”

Kobe's father, Joe Bryant, played in Italy for several years, and was already locally famous when they moved to Reggio Emilia, Giudici said.

“We spent two years with Kobe and he spoke very fluent, very perfect Italian so he was like a friend of ours,” Giudici said.

Kobe Bryant's time in Reggio remains a point of pride for many, the kind of thing that comes up in conversation when people explain where their hometown is. Giudici says that even locals who have no interest in basketball claim Kobe Bryant as their own.

Giudici who is now a graphic designer, but plays locally, said he first found out about Bryant’s death through a flood of messages from friends.

“My first concern was for his family. And it’s unbelievable, almost comic, that he died bringing his daughter to play basketball,” he said.

Former President Bill Clinton and former Secretary of State Hillary Clinton shared their condolences following the death of Kobe Bryant, who they said "lived a very large life in a very short time."

"Hillary and I are deeply saddened by the tragic loss of Kobe Bryant, his daughter Gianna, and all those who died in today's helicopter crash. Kobe brought excitement and joy to basketball fans not just in Los Angeles, but all over the U.S. and around the world. He was also a leader off the court, including in his advocacy for young people, especially the vulnerable and homeless — a passion I saw firsthand when I joined him and Vanessa for the opening of a housing project they and their foundation supported. Kobe Bryant lived a very large life in a very short time. But above all, he loved his family. Our prayers are with Vanessa, Natalia, Bianka, and Capri, and all those who lost loved ones today," the Clintons said.

Sen. Amy Klobuchar, former Vice President Joe Biden and businessman Andrew Yang were among the presidential hopefuls to share their thoughts on the passing of Kobe Bryant today.

Sen. Amy Klobuchar: “I wanted to add I know I just read, President Obama's statement about Kobe Bryant, and just how tragic that is losing his daughter. In that same helicopter crash. And so our thoughts and prayers are with their family."

Mayor Pete Buttigieg: "I just heard about it and I’m shocked, especially shocked that his daughters are reportedly there as well. This is somebody who affected so many fans and supporters, and it’s very difficult to believe."

Former Vice President Joe Biden:  "As I was getting off the bus to come in, I heard about Kobe Bryant. I didn't know him well, only met him a couple of times. But you know, it makes you realize that you've got to make every day count. Every single – every single day count."

Businessman Andrew Yang: "This is the worst news. Kobe is an all-time great who had his entire life ahead of him. My heart goes out to his family, his fans and the millions of people whose lives he touched. Today Kobe is the greatest of all time."

A clip of Bryant's appearance on the hit children's show can be seen here.

“The fire. He burns so competitively hot and desire to win. He brought it each and every night on both ends of the floor. Not too many guys can say that throughout NBA history. He would lock up on D. Obviously, he was dominant on the offensive side. But any time he was in the game, he would take on their best player and shut them down for all 48 minutes. That was one of the more impressive things throughout his entire career. Then when he ruptured his Achilles and went to the foul line and made his shots, that is tough," Woods said.

There was extremely low visibility at the time of the helicopter crash that killed Kobe Bryant and eight other people, CNN meteorologist Michael Guy said.

The conditions were foggy and cloudy with a drizzle, Guy said.

"Relative humidity was 100% meaning the air was like soup," Guy added.

The fog and subsequent pollution from wildfires was also lingering in the air.

The Olympics, International Basketball Federation and AC Milan soccer team in Italy used Twitter to share their thoughts on the passing of Kobe Bryant.

"We have no words to express how shocked we are to hear of the tragic passing of one of the greatest sportsmen of all time and Rossonero fan, Kobe Bryant. All our thoughts are with the families of those affected by this tragic accident. You will forever be missed, Kobe," AC Milan tweeted.

As news of Kobe Bryant's death spread, teams across the league honored the NBA legend during their games today.

The Toronto Raptors let the 24-second shot clock run out after tip-off during their game with the Spurs as a sign of respect for the 5-time NBA champion.

The Los Angeles Clippers also let the 24-second shot-clock run out, while their opponent Orlando Magic got an 8-second violation. Bryant wore numbers 24 and 8 during his career. 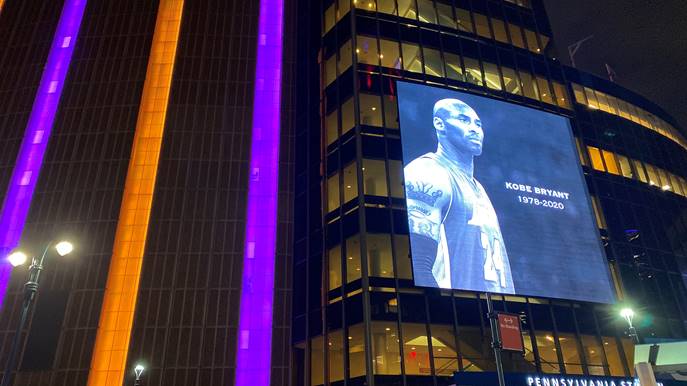 New York City's Madison Square Garden was lit up tonight in purple and yellow as a tribute to Kobe Bryant.

A large image of Bryant can also be seen outside the arena.