Bryant made his name in Los Angeles but his influence was global. Hours before his death a new basketball hall had opened in Manila, Philippines, named in his honor, local press reports. The new gym has now become a place where fans can pay their respects to their hero.

Manchester United and France midfielder Paul Pogba wrote on Twitter: "Heroes come and go. Legends are for ever."

Barcelona and Argentina forward Lionel Messi posted a picture of Bryant on Instagram and wrote: "I don't have words... All of my love for Kobe's family and friends. It was a pleasure knowing him and to share good moments together. A genius like few others has left us."

Several other tennis players in Melbourne have also paid tribute to Bryant and his daughter, Gianni, who also died in the helicopter crash.

They also wrote the numbers 8 and 24 -- Bryant's jersey numbers -- on their shoes.

"Thank you for inspiring people everywhere, you have no idea how many hearts you've touched," she posted on Twitter. "You will forever be my big bro/mentor/inspiration. Love you."

Spectators and tennis players at the Australian Open, in its eighth day in Melbourne, paid tribute to Kobe Bryant on Monday.

Nick Kyrgios warmed up wearing Kobe Bryant's No.8 LA Lakers jersey, ahead of his fourth round match against Rafael Nadal.

The Australian seemed tearful as he walked on court, covering his face with his left hand.

Nine people died in the helicopter crash that killed basketball legend Kobe Bryant -- including his daughter, Gianna, and her basketball teammate.

While police have not released the names of the people on board, family members of some victims have confirmed their loved ones' deaths. Here are the emerging names and faces:

Gianna and Alyssa were teammates at the Mamba Academy, and Altobelli would "routinely" fly with his daughter to attend the games, said OCC assistant coach Ron La Ruffa.

Altobelli, 56, leaves behind a son and daughter, according to an OCC Pirate Athletics news release.

"There were two sides to John," Tony Altobelli said. "People saw him on the baseball field, he's gritty and tough as nails kind of guy but the other side of him, he was one of the biggest-hearted people you'll meet in your life. He cared about his players, cared about his school."

A coach and mother:

Christina Mauser, an assistant girls basketball school at a K-8 private school in Orange County also died in the crash.

"My kids and I are devastated," her husband, Matt Mauser, wrote on Facebook. "We lost our beautiful wife and mom today in a helicopter crash. Please respect our privacy. Thank you for all the well wishes they mean so much." 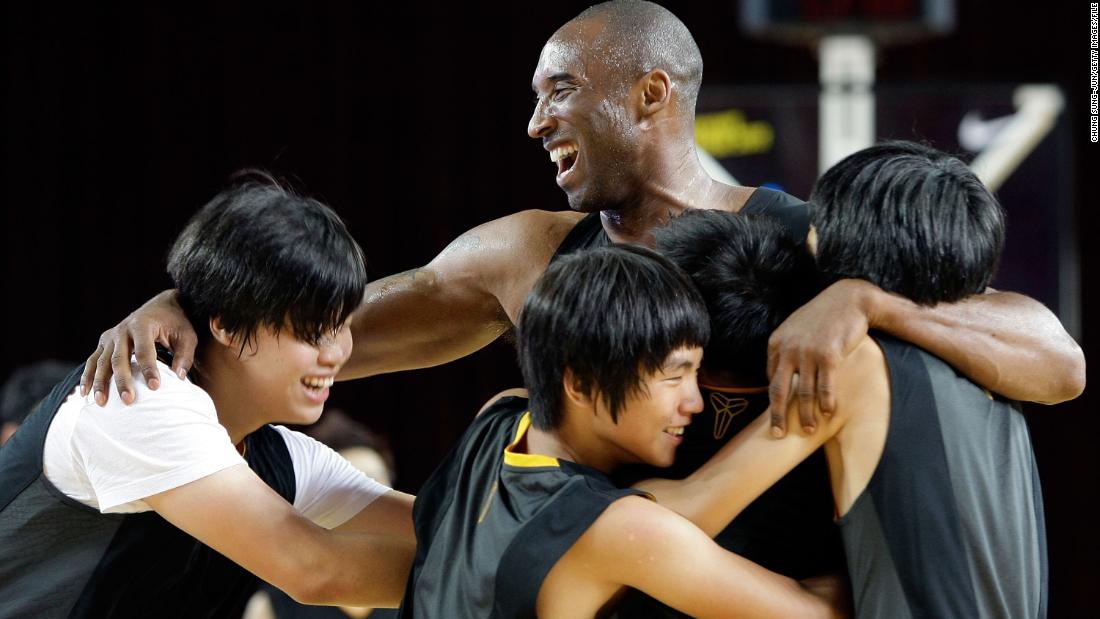 The shock of Kobe Bryant's death was felt as far away as China, where fans mourned his passing along with millions of others across Asia.

Chinese NBA-mania: Within hours of his death, his death became one of the most-searched topics on Weibo, China's Twitter-like platform, where he had nine million followers. Tens of thousands of fans have left tributes and messages of mourning on his Weibo account.

A whole generation of Chinese basketball fans grew up watching Bryant. He enjoyed unparalleled popularity as an icon of their youth, when basketball surged in popularity as the country opened up.

"You're our faith, you're our youth. You're no one else, you're yourself," wrote one user on Weibo, referring to a popular quote from Bryant -- "I don't want to be the next Michael Jordan, I only want to be Kobe Bryant."

Philanthropy in Japan: In 2011, Bryant fronted an American Red Cross campaign to raise support for survivors of the tsunami and earthquake disaster that rocked Japan's northern region of Tohoku.

"The NBA family starts with the people of Japan, the survivors of the earthquake and the Pacific tsunami," said Bryant in the campaign video -- now being shared widely again on Twitter.

Read more here about Bryant's impact in Asia, from Taiwan to the Philippines.

Basketball icon Kobe Bryant died on Sunday in a helicopter crash, along with his 13-year-old daughter Gianna.

The Japanese city of Kobe, after which Kobe Bryant was named, paid tribute to the basketball star after his death on Sunday.

Kobe Mayor Kizo Hisamoto offered his condolences in a statement on Monday:

"Our city had the good fortune of crossing paths with Kobe Bryant as his father named him after the city, given his love of Kobe beef.
Due to this connection with our city, Bryant came to visit the Kobe government office in 1998 to make a donation for the charity. And between 2001 to 2011, he became the city’s ambassador and told the world about us.
Kobe Bryant was an international superstar, who also held a special place for the people of Kobe city.
We would once again like to express our gratitude for the support Kobe Bryant gave to this city and offer our heartfelt condolences.”

Kobe Bryant's legacy extends beyond his time on the basketball court. He was also known to the business world as a brand-builder; an investor; and a coach to other athletes and company founders.

Here's a look back at his business empire: