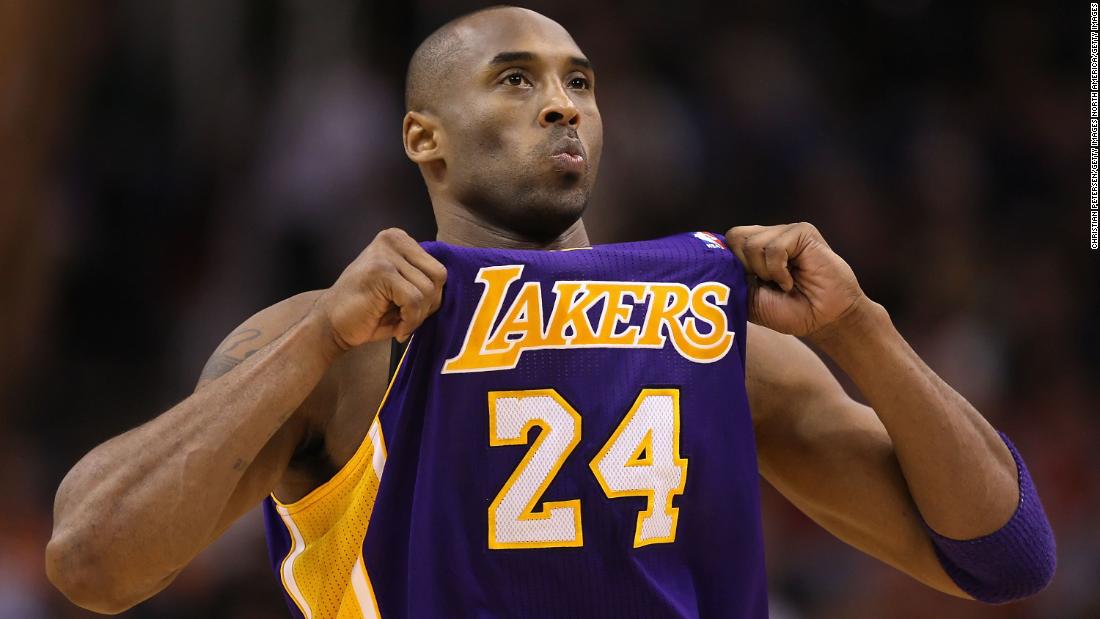 Basketball legend Kobe Bryant, 41, and his 13-year-old daughter Gianna Maria Onore Bryant were among nine people killed in a helicopter crash in Calabasas, California, on Sunday.

We're wrapping up our live coverage, but if you're looking for more on Bryant's life and career, you can...

People flying in and out of LAX may notice this tribute to Kobe Byrant on the side of the Los Angeles Times headquarters.

The newspaper's publisher Dr. Patrick Soon-Shiong, who has a stake in the Lakers, shared a series of photos of the headquarters building lit up with Bryant's silhouette tonight.

"Gigi and Kobe in the heavens and stars together forever," he wrote.

Football fans erupted in a chant at the Super Bowl Opening Night at Marlins Park during a moment of silence for NBA legend Kobe Bryant.

An emergency ordinance has been issued for the crash site of the helicopter crash that killed Kobe Bryant and eight others, Los Angeles County Sheriff Alex Villanueva said in a news conference today.

It is now a misdemeanor for anyone to unlawfully access the site of the helicopter crash. Deputies are patrolling the rugged terrain on horseback, Villanueva said.

Road closures and flight restrictions still remain in effect, he said. Only people who have proper identification and can prove they are a resident will be allowed to enter.

Villanueva also said that they are still waiting on the coroner to make an identification.

“Be patient, it’s going to take a while,” he said. Once notifications are made to the next of kin, media will be notified. The coroner is still recovering human remains from the crash site, Villanueva said.

The pilot of the helicopter killed in the crash was experienced, according to Jennifer Homendy, a member of the National Transportation Safety Board.

The pilot was identified as Ara Zobayan, according to the pilot’s neighbor and a former colleague at Island Express helicopter company. Zobayan was among the victims of the crash that killed eight others, including Kobe Bryant and his daughter Gianna.

He had a commercial certificate and 8,200 hours of flight time as of July 2019, Homendy said at a news conference today. He was also a certified flight instructor.

Zobayan had been working with Island Express, the helicopter company, for a number of years, she said.

The NTSB is looking at pilot records, weather information, ATC communication, and wreckage as part of the investigation.

There was no black box —  a cockpit voice recorder and flight data recorder — onboard the helicopter that carried NBA legend Kobe Bryant and eight others, said Jennifer Homendy, a member of the National Transportation Safety Board.

According to Homendy, it is not a requirement. There was an iPad, however, which was recovered at the crash site. It is used by the pilot for flight plans and weather briefings, she told reporters today at a news conference. The NTSB will be looking at other avionics to see what information can be gathered.

The impact crater is 1,085 feet above sea level, Homendy said as she described the debris field as being about 500 to 600 feet.

When asked about any chance for survival, Homendy responded by saying, “It was a pretty devastating accident scene.”

The FBI is assisting the National Transportation Safety Board to collect evidence from the wreckage of the crash, NTSB board member Jennifer Homendy told reporters today.

"They are essentially a force multiplier for the NTSB," she said. "There is no criminal portion of this investigation," she said.

Jennifer Homendy, a member of the National Transportation Safety Board, said the agency is looking for photographs showing the weather at the time of the helicopter crash.

She urged the public to send any photos to the NTSB.

Investigators were also at the scene today and used drones to begin mapping the wreckage, Homendy said.

"It was a pretty devastating accident scene," she said.

The Empire State Building is lit in purple and gold in tribute to Kobe Bryant tonight, according to the building’s official Twitter account.

According to the Empire State Building's Twitter account, "Our lights will shine in purple and gold this evening as we pay tribute to basketball legend Kobe Bryant, an inspiration to millions across the globe who was taken too soon."