Kyle Rittenhouse found not guilty on all charges

Our live coverage has ended for the day. Read up on the latest from Kenosha below,

The great aunt of Anthony Huber, one of the men who was fatally shot by Kyle Rittenhouse during the civil unrest in Kenosha, Wisconsin, last summer, defended her nephew's actions prior to his death.

“I’m firmly in the camp that he perceived an active shooter and he went to disarm that person,” Susan Hughes said. “That is the Anthony I knew. He was very much a person who would jump into action.”

According to a criminal complaint, Huber reached for Rittenhouse’s gun with his hand while holding the skateboard in the other.

“There were a couple of other people who did the same thing," Hughes said. "Nobody was successful. He lost his life. I was asked the other day by one of the media people if I thought Anthony would do the same thing again. And I think he would.”

Some context: Rittenhouse was acquitted Friday of first-degree intentional homicide and four other felony charges.

Kyle Rittenhouse attorney Mark Richards told CNN that "Kyle said, if I had to do it all over again ... I wouldn't do it."

When asked if Rittenhouse wished he had not gone out that night and if he thinks he did anything wrong, Richards said, "Kyle said, if I had to do it all over again and had any idea something like this could happen, I wouldn't do it."

"I want to be clear. That is not regret for what he did that night under those circumstances," he added.

"Does he think he did anything wrong?" CNN asked.
"Legally, no," Richards replied.

As for morally, he said, "He wishes he didn't have to do it."

After Kyle Rittenhouse was acquitted Friday of first-degree intentional homicide and four other felony charges, he said that he believed the jury reached the correct verdict.

Rittenhouse was riding in the back of a vehicle and appeared to be wearing the same outfit he had on when the verdict was read.

“It's been a rough journey, but we made it through it. We made it to the hard part," he said.

Mark Richards, an attorney for Kyle Rittenhouse, said Friday that he did not approve the Fox film crew that was embedded with the defense team during the trial.

“I threw them out of the room several times,” Richards told CNN. “I don't think a film crew is appropriate for something like this.”

“But the people who were raising the money to pay for the experts and to pay for the attorneys were trying to raise money," Richards added. "I don't want to say an evil, but a definite distraction was part of it. And I didn't approve of it. But I’m not always the boss.”

Some context: Washington Post media reporter Jeremy Barr tweeted a clip of what appears to be a special produced by Fox’s "Tucker Carson Originals."

Lee Merritt, an attorney for Ahmaud Arbery's mother, Wanda Cooper-Jones, told CNN Friday that the not guilty verdict handed down in the case of Kyle Rittenhouse, the teenager who killed two people and shot another during unrest in Kenosha, Wisconsin, was “deeply troubling” and “very scary” for Arbery's family as closing statements are expected Monday in the trial of three white men charged in Arbery’s killing.

Rittenhouse was acquitted Friday of first-degree intentional homicide and four other felony charges.

Merritt said the US justice system historically doesn't work well when the assailants are white.

“There's a long history of racism that exists within our courts. It's a reality,” Merritt said, “It's a statistical reality that we see playing itself out.”

Some context: Attorneys in the Arbery murder trial are expected to begin closing arguments Monday after 10 days of court proceedings and testimony from more than 20 witnesses and investigators.

The defense rested its case Thursday, and lawyers and the judge were working in court Friday on what instructions to give to the jury. 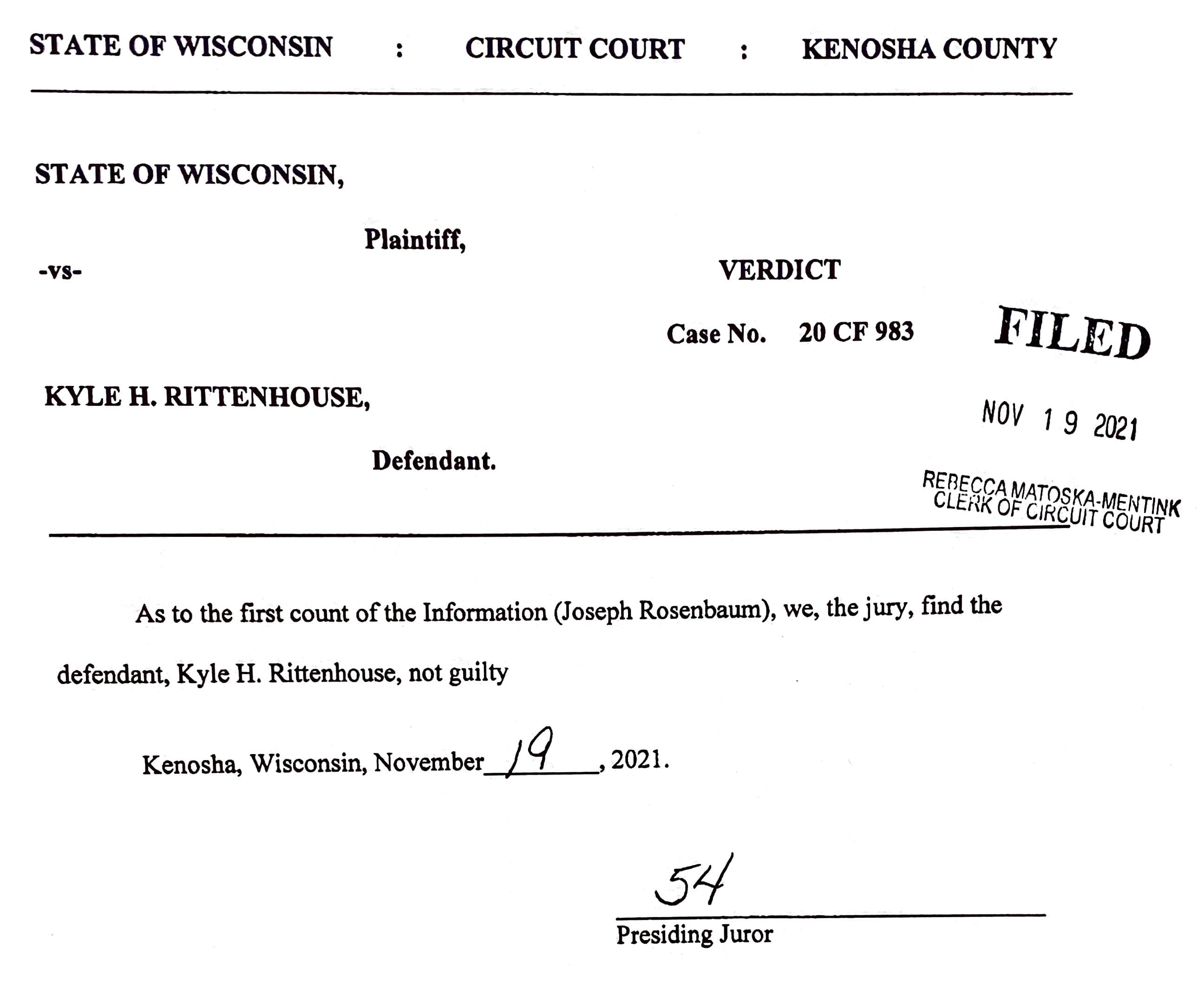 Kyle Rittenhouse, the teenager who killed two people and shot another during unrest in Kenosha, Wisconsin, was acquitted Friday of first-degree intentional homicide and four other felony charges.

Jury verdict sheets from the trial appear to give some insight into the jury's process of deliberation.

Juror 54, the presiding juror in the case, signed the “not guilty” verdict sheets for counts 1 and 2 today. Rittenhouse faced a charge of first-degree reckless homicide for fatally shooting Joseph Rosenbaum in count 1. Count 2 stated that Rittenhouse recklessly endangered the safety of Richard McGinnis, who was near Rittenhouse during the first shooting.

The presiding juror in the case, signed the "not guilty" verdict sheet for count 5, on Thursday. Rittenhouse was charged in count 5 with attempted first-degree intentional homicide for shooting Gaige Grosskreutz.

Juror 54 signed the "not guilty" verdict sheets for counts 3 and 4 on Wednesday. Count 4, the most severe charge Rittenhouse faced, was first-degree intentional homicide for the fatal shooting of Anthony Huber. Rittenhouse was charged in count 3 with first-degree recklessly endangering the safety of an unknown man.

The 12-person jury deliberated for more than 25 hours over the course of four days.

Following the verdict in the trial of Kyle Rittenhouse, Justin Blake, the uncle of Jacob Blake, said, "What was done today was heinous."

Rittenhouse, the teenager who killed two people and shot another during unrest in Kenosha, Wisconsin, was acquitted Friday of first-degree intentional homicide and four other felony charges.

Blake also discussed his nephew's case, saying he demands the case be reopened.

"We're demanding that Jacob Blake's case be reopened," he said.

Remember: A White officer shot Blake, a 29-year-old Black man, seven times while responding to a domestic incident on Aug. 23, 2020. Blake survived the shooting but was left paralyzed from the waist down.

His shooting sparked unrest in Kenosha.

"I think this is a very, very dangerous precedent that has been set," said LaMarr when asked by CNN if he believed the verdict would embolden others to follow Rittenhouse's example.

LaMarr pointed to the shooting of Blake last summer, for which the White officer who shot him seven times in the back was never charged, saying the judicial system treats Black and White Americans differently.

"It's important that we have clear standards in being able to hold individuals accountable for engaging and provoking situations," he said. "I think that you don't see the same thing occur when it's African-Americans."

The fiancée of Joseph Rosenbaum, one of the men fatally shot by Kyle Rittenhouse, said, "I feel like in this case, the victims' lives don't matter."

"If one person's life or two persons’ lives don't matter, then none of our lives matter," Kariann Swart said while speaking to reporters following the verdict in the Rittenhouse trial. "And I feel like in this case, it feels like, the victims' lives don't matter. And I don't think that that is acceptable."