At least 9 dead after partial building collapse near Miami

"As of today, one victim passed away in the hospital, and we've recovered eight more victims on-site, so I am confirming today that the death toll is at nine," the mayor said.

She said that they have identified four of the victims and notified the next of kin.

"We are making every effort to identify those others who have been recovered, and additionally, contacting their family members as soon as we are able," she said.

A news conference with officials is currently ongoing in Surfside.

The fire that was hampering search efforts at the Surfside, Florida, building collapse site is now "under control" said Miami-Dade County Mayor Daniella Levine Cava at a news conference this morning.

"Our teams have done an amazing job and yesterday we suppressed the fire that had been going out of control and the smoke that was inhibiting activities in certain parts of the pile, so around noon yesterday that was brought under control, making it possible for the search to continue in those areas as well," she said.

Surfside, Florida, Mayor Charles Burkett promised enduring commitment to the families of those who have loved ones still in the building collapse rubble.

“We are working 24-hours a day non-stop, nothing else on our mind, with the only objective of pulling their family members out of that rubble safely. That's what we're doing and we’re not going to stop doing that, not today, not tomorrow, not the next day. We’re going to keep going until everybody is out,” Burkett said on ABC.

“There was something obviously very, very wrong at this building and we need to get to the bottom of it,” he said. “But like I said, that’s not today, not tomorrow and not for a long time because our first priority and only priority is to pull our residents out of the rubble and reunite them with their family, who understandably are out of their minds with emotion, sadness, anger, and just confused and want to know what is happening.”

Miami-Dade Fire Rescue tweeted a new video of their crew lifting a huge piece of rubble off the collapse site using a crane.

The tweet reads, “The work of first responders continues around the clock in the effort to find survivors in void spaces within the rubble of the #SurfsideBuildingCollapse.”

Levine Cava told CNN a fire that had been complicating search and rescue efforts was brought under control by noon Saturday.

“So that really supported everyone in the efforts so they’ve continued tirelessly throughout the night,” Levine Cava said.

When asked about how she was dealing with family members who are overwhelmed with anxiety and pain as they await news on their loved ones, Levine Cava said she and other officials are working to keep them up to date with the latest information.

“We’ve worked really hard to bring information, timely, to family members,” the mayor said. “We want to be sure they don’t learn about it from the news.

Levine Cava said while “nobody wishes for that terrible news” that a loved one has been recovered deceased, officials are trying to help them understand the different possibilities.

“We’ve also talked with them about the developments, for example with the body parts, finding body parts. Obviously, that’s a very sobering bit of news. And they are understanding that that is a possibility so we are talking through what that means, how is the DNA evidence taken, what’s happening with the medical examiner, how they will be notified,” Levine Cava said.

Levine Cava said she was meeting with family members until about midnight last night.

Maggie Castro with Miami Dade Fire Rescue said emotions are high for families of the missing as well as first responders, as the search of the rubble at the Champlain Towers South collapse continues.

"[T]his is an extremely highly emotional situation that these families are in. I can't even imagine being in a position, as the position that they are in, not knowing, feeling helpless as to not do anything themselves," Castro said. "[T]hey don't have anywhere to place these emotions right now, because there is a lot of them. And it's okay. If they need to direct them at us, we're more than willing to handle it. We understand that they have to let this emotion out somewhere.”

Castro said it is also a very “emotionality taxing” time for first responders who are combing through the rubble, “we go through our own emotional process."

“We work hour after hour hoping, because this is what we do, we save people, and this is what we want to do, and we want to bring the family members back to their families. And when we come up empty-handed, it's difficult for us as well,” she said.

Castro said MDFR is committed to remaining in search and rescue mode for as long as it takes.

“We are not going to go into a recovery mode until we have exhausted every possible measure of finding anyone in this rubble. We are going to go through this entire rubble pile until there is nothing else to go through, and at that point then we may have to consider going to recovery mode," Castro said.

They are known for responding to hurricanes, but the United Cajun Navy also provides emotional support resources during other types of disasters.

Two emotional support dogs are in Surfside providing support to families anxiously waiting to hear news about their loved ones, according to Yisnery Gomes, an emotional support coordinator for the Florida operations of the United Cajun Navy. Another two dogs will arrive today. The emotional support services are being provided at the Grand Beach Hotel, which is serving as a family reunification and support center.

An emotional support chaplain who works with families and first responders will also arrive to Surfside today, according to Gomes.

Gomes says the United Cajun Navy is working in conjunction with a non-profit called “Boricuas de Corazón Inc Foundation” to provide emotional support volunteers who are bilingual in English and Spanish.

Some family members of the people who remain unaccounted for following a residential building collapse in South Florida have grown impatient during the slow, painstaking rescue efforts that are likely to continue for days.

A mother who said she is worried about her 26-year-old daughter who is missing after the partial building collapse in Surfside, Florida, desperately urged officials on Saturday to do more.

"I'm a mother. I don't know the best way to go about this. ... Imagine if your children were in there," the mother told state and local officials as they met with the families of those missing following the collapse.
"I know you're doing everything you can, but it's not enough," she said in an emotional video posted to Instagram Saturday.

The families of the dozens still unaccounted for following Thursday's partial collapse of a condo building a few miles north of Miami Beach are growing impatient, desperate for faster results from the search and rescue crews who have been digging through the rubble around the clock. 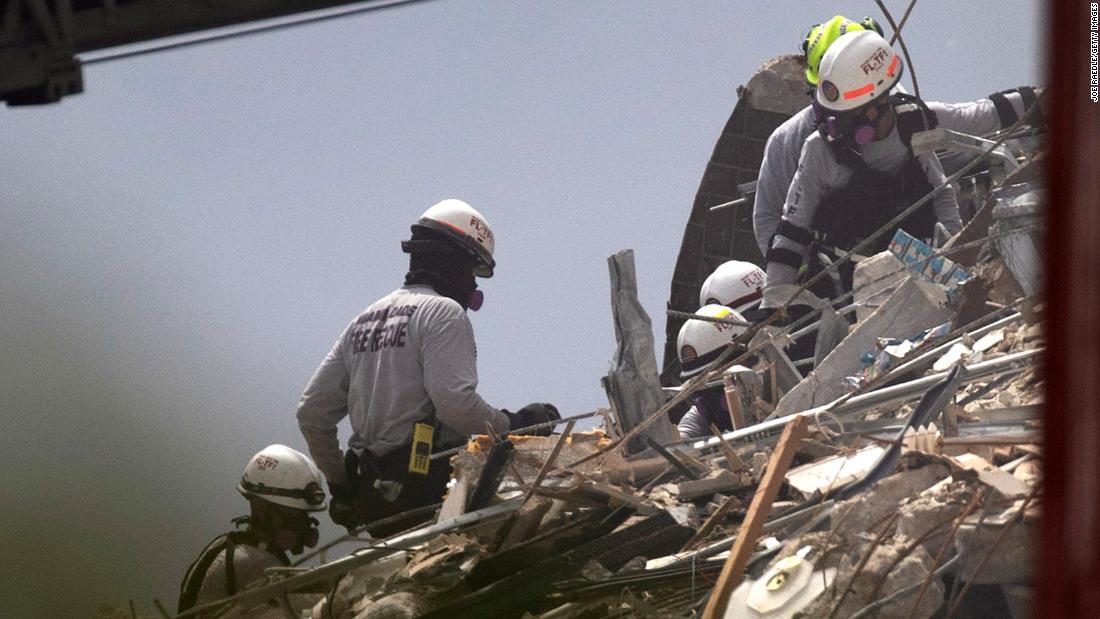 FEMA Administrator Deanne Criswell said she will visit Surfside on Sunday at the request of President Joe Biden.

“I’m visiting #Surfside tomorrow at the request of @POTUS to discuss ongoing response efforts with our [FEMA] team, state partners, and first responders,” she tweeted Saturday.

“My heart is with the affected residents and the families still waiting for news about their loved ones.”

Biden also took to Twitter on Saturday to pay tribute to those affected by the tragedy.

“My heart is with the community of Surfside as they grieve their lost loved ones and wait anxiously as search and rescue efforts continue,” he said.

“Yesterday I spoke with Gov. DeSantis to let him know that we are ready to provide assistance as needed by state and local officials.”