The FBI has offered to assist Mexican authorities in the investigation into the killing of nine Americans in northern Mexico last night, an FBI official said. A family member said the nine victims all had dual US-Mexican citizenship.

Speaking in a daily news conference today, Mexican President Andrés Manuel López Obrador thanked President Trump for his help — but said it is "Mexico's responsibility" to deal with this incident. 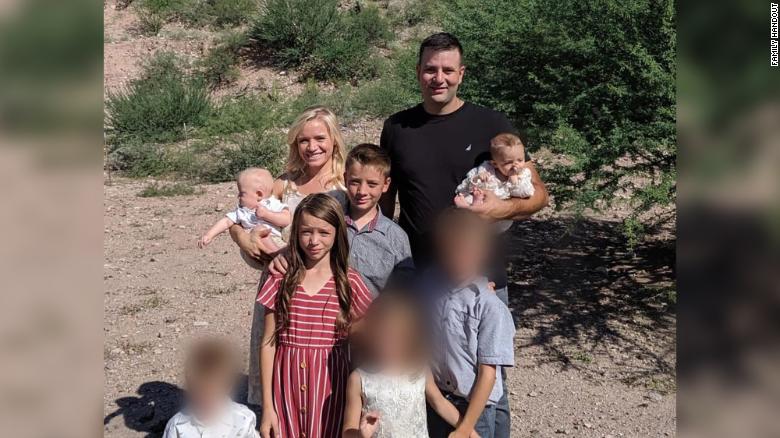 This photo shows five of the nine victims of the deadly attack on the US-Mexico border.

Rhonita Marie Miller, 30, was killed in the attack. The girl in the red dress, 10-year-old Krystal Bellaine Miller, and the boy in the gray shirt, 12-year-old Howard Jacob Miller, Jr., were also killed.

The man in the back, 30-year-old Howard Miller, is alive.

The three children in the front — from left to right, 2-year-old Zach, 5-year-old Amaryllis and 8-year-old Tristan — also survived. Their faces have been blurred.

Mexican Security Minister Alfonso Durazo has confirmed that at least three women and six children were killed in the attack. A relative of the victims said the nine were family members and all had dual US-Mexico citizenship.

Kendra Lee Miller says her brother, Howard Miller, and her sister-in-law, Rhonita Maria Miller, were getting ready for her wedding when their car was attacked in Northern Mexico, she told CNN.

Kendra told CNN that Rhonita, 30, was driving with four of her seven children in one of the three cars that was attacked.

“They were driving together for safety reasons,” Kendra said, “Rhonita was going to do some shopping there [in Tucson] and pick up her husband to come down for the wedding.”

The wedding was scheduled to take place next week in La Mora, Mexico, where the family ranch is located.

Kendra said there were two other cars in the caravan:

The caravan of three cars left La Mora early yesterday — but Rhonita’s vehicle broke down with a flat tire, Kendra said. The group in the three cars traveled back to pick up another car.

Back in La Mora, Rhonita took her mother’s car with her children and continued back on the journey with the other two vehicles, driven by Christina and Dawna.

Kendra says her brother Andre was on the mountain road near La Mora when he saw a fire in the distance where the caravan of three cars was attacked.

Here's how she explained it:

“My brother was fixing Rhonita’s broken-down vehicle, saw a fire, didn’t think anything of it. Then saw the explosion, went to check it out, saw it was my mother’s vehicle, full of bullet holes, completely ablaze. He hoped and prayed my sister-in-law and four children had gotten out. He rushed back to La Mora for help. My dad, Kenneth Miller, was just about to head to our family ranch in the opposite direction,” Kendra said.
“My dad, Andre and couple of uncles and relatives went to check up the vehicle, all they found was charred remains, ash and bones. They were able to verify there were five people in the vehicle, it appeared one of them who we think Howard junior, older son, tried to get out because the passenger door was open. There were remains inside and outside of the vehicle.”

A caravan of women and children with US citizenship living in northern Mexico came under attack by cartel members Monday morning, resulting in the deaths of at least three women and six children, relatives based in Utah told CNN affiliate KSL.

Three women and more than a dozen children were traveling in separate vehicles when they were attacked, relatives of the family said.

They were coming from La Mora, a settlement in the state of Sonora. It was founded by early members of The Church of Jesus Christ of Latter-day Saints.

Speaking in a daily news conference, Mexican President Andrés Manuel López Obrador thanked President Trump for his help — but said it is Mexico's responsibility to deal with this incident.

“At the end of this press conference I will communicate with him [President Trump] to inform him [about the incident]. I will thank him for his support and we will discuss if we need assistance," adding "I do not believe that we will. It's Mexico's responsibility," Mexican President Andrés Manuel López Obrador said.

In a tweet on Tuesday, Trump said, “This is the time for Mexico, with the help of the United States, to wage WAR on the drug cartels and wipe them off the face of the earth. We merely await a call from your great new president!” In a previous tweet, Trump said that the US “stands ready, willing & able to get involved and do the job quickly and effectively.”

President Lopez Obrador has acknowledged that the US and Mexico have a "cooperative relationship," citing this incident as "an example of this cooperation.” He said he will call President Trump after the press conference.

Remember: The attorney general of the State of Chihuahua said preliminary information indicates the 9 dual US-Mexican citizens were attacked by criminal groups, but officials have not explicitly said a drug cartel was behind the attack.

Members of a Mormon community were attacked while traveling near the US-Mexico border, authorities said today.

Many details about the attack are unclear, but here's what we know so far:

Family members of the victims said the attack occurred in the Mexican state of Sonora, where a large Mormon community has resided for decades, CNN's Matt Rivers reports.

While the story is still developing, the relative told CNN that there were three women and a number of children in several cars when they were attacked. The vehicles had different final destinations but were traveling together initially for security reasons. During that journey, the convoy was attacked.

Rivers explained Sonora is a part of northwestern Mexico that has seen horrific amounts of cartel and drug-related violence. The family thinks that perhaps one cartel mistook the convoy for another cartel. (Remember: while the attorney general of the State of Chihuahua said preliminary information indicates they were attacked by criminal groups, but officials have not explicitly said a drug cartel was behind the attack.)

The attack comes amid worsening violence in Mexico: This year alone 100 people per day have been killed in the country as a result of drug-related violence, Rivers reported.

President Trump commented on the news that nine people were killed in Mexico Monday.

“A wonderful family and friends from Utah got caught between two vicious drug cartels, who were shooting at each other, with the result being many great American people killed, including young children, and some missing.”

In a tweet minutes later, Trump added bluntly: “This is the time for Mexico, with the help of the United States, to wage WAR on the drug cartels and wipe them off the face of the earth. We merely await a call from your great new president!”

Some context: A family member told CNN the victims were attacked “separately but simultaneously by two different groups of same cartel.” The attorney general of the State of Chihuahua said preliminary information indicates they were attacked by criminal groups, but officials have not explicitly said a drug cartel was behind the attack.

Here are the tweets: 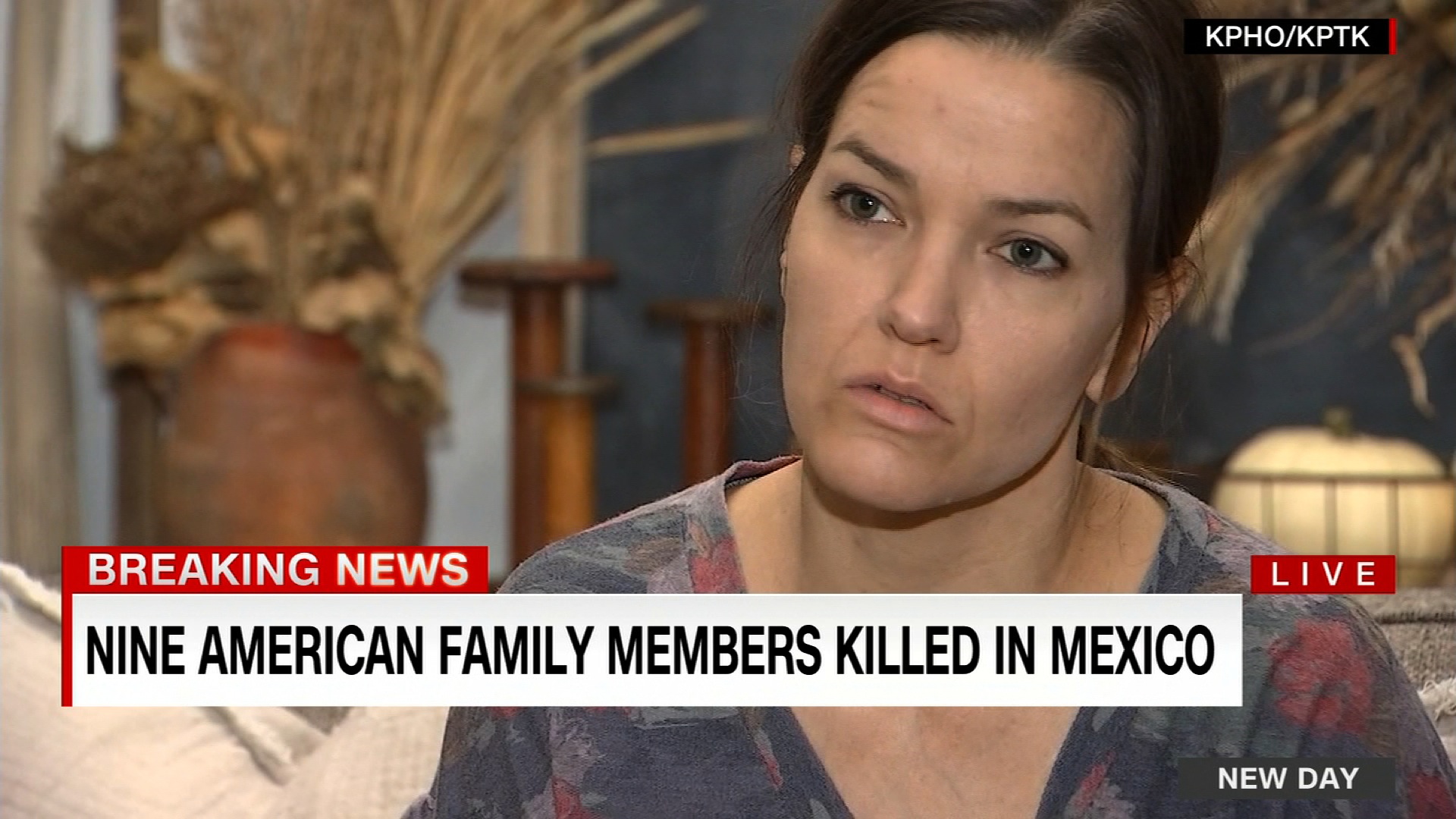 Leah Staddon told CNN affiliate KTVK that her relatives were among the victims of the attack.

“I think a lot of us are just speechless. It’s just horrific,” Staddon said. “My sister could actually see the smoke from her house and they heard the gunshots… just can’t believe that this has actually happened to our family. It just seems like a bad dream.”