A second mass shooting in the United States in 13 hours occurred early Sunday in the busy Dayton, Ohio, nightlife area known as the Oregon District.

Nine people are dead and 26 wounded. The shooter is also dead. Police identified him as 24-year old Connor Betts.

FBI and local law enforcement authorities have served a search warrant at the shooter’s family home in Bellbrook, Ohio, southeast of Dayton.

Asked what he was going to do to address gun violence, President Trump told reporters Sunday that “a lot of things are in the works” and claimed his administration has done “much more than most administrations.”

Trump oversaw a ban on so-called bump stocks but has not pursued large-scale gun control efforts. His predecessor, Barack Obama, took dozens of executive actions on gun control, including on background checks and mental health.

Trump touted his administration’s work on the issue, saying, “We’ve done actually a lot but perhaps more has to be done.”

Trump also said this is a “mental illness” problem.

Trump ignored other questions on the topic, including one on white nationalism.

Dayton police showed a photo and provided detail on the gun the suspect used in the attack.

Police Chief Richard Biehl told the media the weapon has a "double drum magazine" which has a capacity of up to 100 rounds.

Biehl added that police weren't aware of anything "in this individual's history or record that would have precluded him from purchasing that weapon."

Asked by reporters about the legality of the large magazine, Biehl said there is "no indication that that is illegal at this time."

Biehl said the suspect fired "dozens" of shots during the shooting.

Dayton Police Chief Richard Biehl provided media with an update Sunday afternoon on the law enforcement investigation into the shooting.

Biehl said that at 1:05 a.m. Sunday, officers patrolling heard gunfire and responded to a shooting incident in the Oregon district.

Biehl said within 20 seconds of hearing gunfire, police officers engaged with the suspect. He said the threat was neutralized within 30 seconds of the suspect beginning to fire shots.

Biehl said six officers were involved in engaging the shooter -- five officers and one sergeant. He said per standard department protocol, those officers will be placed on administrative leave

Biehl said the suspect, Connor Betts, had a minimal history with law enforcement. He had traffic violations for speeding, failure to control and failure to yield.

Biehl released a 911 radio call and multiple surveillance videos from the time of the incident. In one video, Biehl said, an officer can be seen shooting the suspect as he tries to enter the Ned Peppers bar.

The police chief said stopping the suspect before entering the bar was "essential" and prevented further "catastrophic injury and loss of life."

Dayton Mayor Nan Whaley said she's received an outpouring of support Sunday from all across the US.

Whaley said she's heard from over 70 other mayors -- including Buddy Dyer, mayor of Orlando, where 49 people were killed at the Pulse nightclub in 2016. 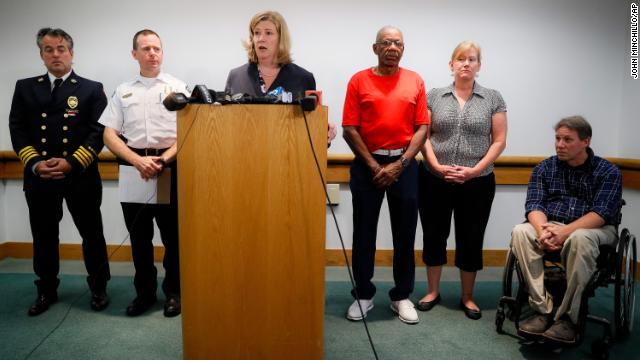 Sen. Rob Portman of Ohio praised law enforcement's quick response to the shooting. Police killed the gunman less than a minute after he opened fire.

"This courage was extraordinary, and saved lives -- probably hundreds of lives," Portman said.

"I'm impressed with how this community comes together and responds."

The college attended by shooting suspect Connor Betts says it's working with law enforcement to "provide any and all information we may have to assist them in the response to this horrific act."

Sinclair Community College in Dayton said in a statement that Betts was "previously enrolled" as a student but wasn't attending any classes this summer.

“Our hearts are broken for so many members of this wonderful community this weekend. A senseless tragedy occurred in our community and our thoughts are and will remain with the victims and their friends and families. We have learned that the person who is suspected of perpetrating this heinous crime was previously enrolled as a Sinclair student though was not actively enrolled this summer term. We are actively working with law enforcement to provide any and all information we may have to assist them in the response to this horrific act. We will respond in a timely manner to inquiries on this matter. As our community comes together in responding to this tragedy, each of us must play a part and we stand ready to do ours.”

Authorities have found writings linked to Dayton, Ohio, shooting suspect Connor Betts that show he had an interest in killing people, two federal law enforcement sources told CNN. A preliminary assessment of the writings, found during the execution of a search warrant, did not indicate any racial or political motive, the sources said.

At an afternoon press conference, police said they are looking for any indication of motives.

“We're always looking at what could have motivated such a horrific action as this, and like I said this morning, we're interviewing dozens of people and going through a lot of different electronic evidence, other evidence to try to determine that. We don't have that answer yet,” Lt. Col. Matt Carper, Dayton Deputy Chief of Police said. “But speculating at this point would be premature.”

The City of Dayton has released the names of the nine deceased victims in the shooting early Sunday. Suspect Connor Betts' sister was identified as one of those killed.

Here are their names:

Ohio Governor Mike DeWine said at a Sunday afternoon press conference that "all the victims are from our own backyard."

DeWine added, “this is just an immense tragedy. No matter where the victims are from, they're victims. Our hearts go out to the families. This is a Miami Valley tragedy.” 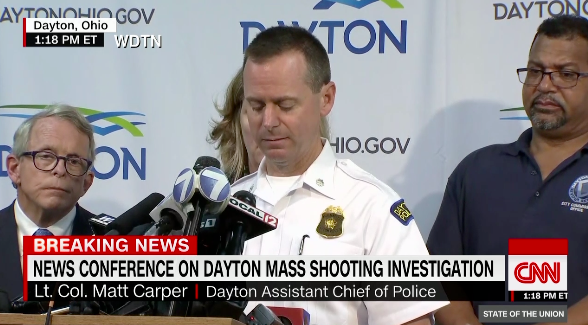 Dayton Police Deputy Chief Matt Carper confirmed that Connor Betts is the shooter and that his sister Megan Betts, 22, was one of those killed.

Speaking at a press conference, Carper identified the nine slain victims, who ranged in age from 22 to 57. He said all families have been notified.

Carper said all nine of the victims were found in the same location.