Our live coverage of the Philadelphia shooting standoff has ended, but you can read more about it here. 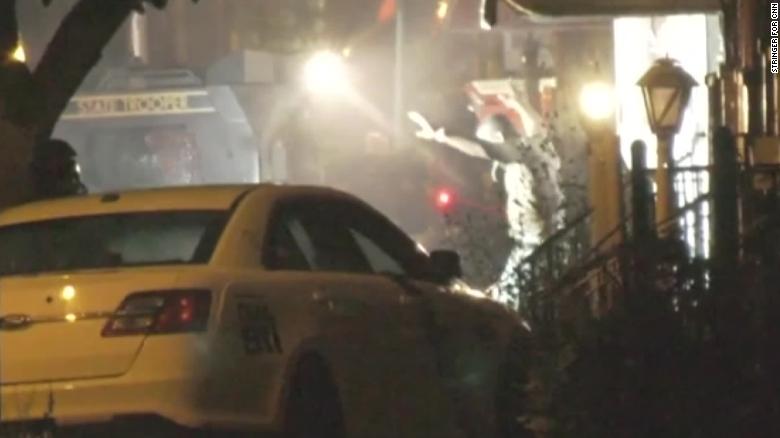 The suspect has been taken into police custody after an hourslong standoff with the police in Philadelphia.

Before he surrendered and came out, police surrounded the row house and cordoned off the nearby streets.

Onlookers gathered as police tried to get the suspect to communicate. Six officers were injured, but they have been released from the hospital and are in "good spirits," said the Philadelphia mayor.

SWAT and police teams were deployed. The SWAT teams helped evacuate two police officers and four women who had been trapped inside the home.

Philadelphia Police Sgt. Eric Gripp just tweeted that the suspect is in custody and SWAT teams are clearing the house.

Police say they've spoken with the armed man who's been barricaded inside a Philadelphia row house.

After hours of ignoring efforts by police to communicate, the man's attorney and Commissioner Richard Ross got on a call with him to try to assure him police were not going to harm him.

"We don't know if he's injured. In my conversation with him, it doesn't appear that he is," Ross told reporters. "But I'm not sure."

"It's just something that, we need to do something about it," Kenney said at a second press conference Wednesday evening. "And if the state and federal government don't want to stand up to the NRA and some other folks, then let us, let us police ourselves. But they preempt us on all kinds of gun control legislation."

All of the Philadelphia police officers who were shot during Wednesday's confrontation have now been released from area hospitals, Sgt. Eric Gripp said on Twitter.

"One Officer is being admitted for injuries sustained in a vehicle crash related to the incident," he wrote. "Situation remains active and ongoing."

The suspect is still alive and inside the building, Philadelphia Police Commissioner Richard Ross said.

Ross said the suspect does not appear to be injured, but he can’t say for sure.

The suspect had been firing shots all evening, but “he hasn’t done so in a while.”

“We’re optimistic that that means he’s starting to understand that, you know, there’s some benefit to him coming out and surrendering,” Ross said.

Philadelphia Police Commissioner Richard Ross says that SWAT managed to free the two police officers and three others who were trapped inside the row house with the shooter.

"SWAT did that, they were so adept at doing that," he told reporters. "They've got a skill set that they were able to utilize tonight and they were able to use stealth to do it. And to do so in large part without him being aware -- or at least we don't think he was aware."

Philadelphia Police Sgt. Eric Gripp said on Twitter that the two officers who were barricaded inside the row house with the suspect have been safely evacuated by the SWAT team.

"Suspect is still armed and inside house," he wrote. "Continue to avoid the area."