Justice Ruth Bader Ginsburg — even after her fifth diagnosis with cancer — was writing a book with one of her former clerks, Amanda Tyler.

It was based on her life on gender equality.

Following the death of Ruth Bader Ginsburg, Senate Minority Leader Chuck Schumer called her a "giant in American history" and a "trailblazer for women."

Schumer went on to tweet a warning to Senate colleagues about rushing to confirm a new Supreme Court justice, writing that, "The American people should have a voice in the selection of their next Supreme Court Justice. Therefore, this vacancy should not be filled until we have a new president."

Irin Carmon, the co-author of "Notorious RBG," discussed her relationship with the late Ruth Bader Ginsburg who, in 2017, had officiated her wedding.

"[S]he sent me a note and a T-shirt making her an honorary grand clerk, although I did not have the honor of working for Justice Ginsburg. She's somebody that drew people in even in her own reserved way, she's somebody that made you feel like you were part of her caring circle. In terms of her sense of humor, it was very subtle. It was an honor to make her laugh," Carmon said on CNN.

The Supreme Court of the United States this evening announced that Justice Ruth Bader Ginsburg has died.

Here's how the statement from the court began:

"Associate Justice Ruth Bader Ginsburg died this evening surrounded by her family at her home in Washington, D.C., due to complications of metastatic pancreas cancer. She was 87 years old. Justice Ginsburg was appointed to the Supreme Court by President Clinton in 1993. She was the second woman appointed to the Court and served more than 27 years. She is survived by her two children: Jane Carol Ginsburg (George Spera) and James Steven Ginsburg (Patrice Michaels), four grandchildren: Paul Spera (Francesca Toich), Clara Spera (Rory Boyd), Miranda Ginsburg, Abigail Ginsburg, two step-grandchildren: Harjinder Bedi, Satinder Bedi, and one great- grandchild: Lucrezia Spera. Her husband, Martin David Ginsburg, died in 2010."

"Our Nation has lost a jurist of historic stature. We at the Supreme Court have lost a cherished colleague. Today we mourn, but with confidence that future generations will remember Ruth Bader Ginsburg as we knew her -- a tireless and resolute champion of justice," Roberts said.

You can read the full statement from the Supreme Court here.

Former 2020 Democratic Presidential candidate Pete Buttigieg honored the late Supreme Court Justice Ruth Bader Ginsburg on Twitter, saying that she "now shines within the history of our country, there to inspire generations."

"Ruth Bader Ginsburg was a titan of justice," he wrote.

The tribute featured "Saturday Night Live" star Kate McKinnon, who often played Ginsburg in a recurring role on the late night show, and actress and singer Jennifer Lopez, among others.

Here is the letter that Ginsburg wrote for the event: 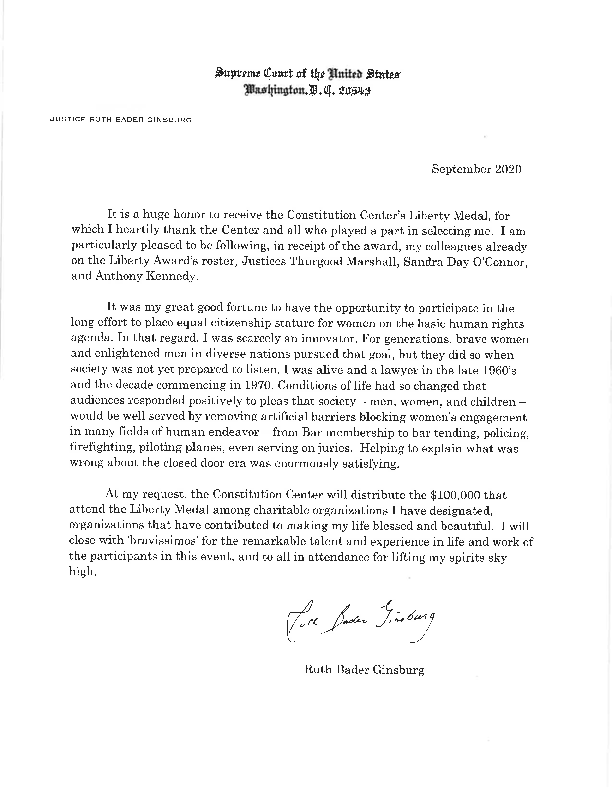 Ruth Bader Ginsburg was nominated to the Supreme Court in 1993 by then-President Bill Clinton, and became the second woman appointed to the bench.

Her swearing in came about 12 years after Sandra Day O'Connor became the first woman to sit on the Supreme Court.

Since then, Sonia Sotomayor and Elena Kagan have been appointed to the bench.

Ginsburg achieved an icon status, particularly among young lawyers — and her dissents enhanced her prominence. The "Notorious RBG" meme, a play on the rapper Notorious B.I.G.," began as fans responded to her dissenting opinion in a case in which the conservative majority curtailed the reach of the federal Voting Rights Act. She was also one of the four dissenting votes in Bush V. Gore, which resolved the disputed 2000 Presidential election in favor of George W. Bush.

Before being nominated to the Supreme Court, she served as a US Court of Appeals for the District of Columbia Circuit and a law professor. Ginsburg was the first woman to be hired with tenure at Columbia University School of Law.