CNN and the GVA define a mass shooting as a shooting that injured or killed four or more people, not including the shooter.

Former President Barack Obama responded to the shooting in Uvalde, Texas, by saying the United States “is paralyzed, not by fear, but by a gun lobby and a political party that have shown no willingness to act in any way that might help prevent these tragedies.”

“Across the country, parents are putting their children to bed, reading stories, singing lullabies—and in the back of their minds, they’re worried about what might happen tomorrow after they drop their kids off at school, or take them to a grocery store or any other public space.”
“Michelle and I grieve with the families in Uvalde, who are experiencing pain no one should have to bear. We’re also angry for them. Nearly ten years after Sandy Hook—and ten days after Buffalo—our country is paralyzed, not by fear, but by a gun lobby and a political party that have shown no willingness to act in any way that might help prevent these tragedies.”
“It’s long past time for action, any kind of action. And it’s another tragedy—a quieter but no less tragic one—for families to wait another day. May God bless the memory of the victims, and in the words of Scripture, heal the brokenhearted and bind up their wounds.”

In his remarks to the nation Tuesday, President Biden said on his 17-hour flight from Asia he wondered why mass shootings are so prevalent in America.

"They have mental health problems. They have domestic disputes in other countries. They have people who are lost. But these kinds of mass shootings don’t happen with the frequency they happen in America,” Biden said.

"Why are we willing to live with this carnage? Why do we keep letting this happen? Where in God’s name is our backbone to have the courage to deal with and stand up to the lobbyists," Biden said.

Biden said it is time to "turn this pain into action" for the parents and citizens of the US.

"We have to make it clear to every elected official in this country it’s time to act,” he said.

While addressing the nation after Tuesday's mass shooting at the Robb Elementary School in Uvalde, Texas, President Biden remembered the 2012 Sandy Hook mass shooting that claimed the lives of 20 children and six adults, and the others that have followed since.

"Since then, there have been over 900 incidents of gunfires reported on school grounds. Marjory Stoneman Douglas High School in Parkland, Florida, Santa Fe High School in Texas, Oxford High School in Michigan — list goes on and on. The list grows. When you include mass shootings in places like movie theaters, houses of worship, as we saw just 10 days ago at a grocery store in Buffalo New York," he said.

"I am sick and tired of it. We have to act. And don't tell me we can't have an impact on this carnage," he added.

He stressed the importance of "common-sense gun laws," saying that not every tragedy can be prevented, but these laws can have a positive impact.

"The idea that an 18-year-old kid can walk into a gun store and buy two assault weapons is just wrong. What in God's name do you need assault weapon for except to kill someone?" he said.

"Deer aren't running through the forest with Kevlar vests on for God's sake. It's just sick," he added.

President Biden addressed the nation from the White House tonight, opening his remarks by saying, "I had hoped, when I became President, I would not have to do this, again."

He called today's mass shooting at Robb Elementary School in Uvalde, Texas, "another massacre" in the US.

"Beautiful, innocent, second, third, fourth graders. And how many scores of little children who witness what happened, see their friends die, as if they're on a battlefield for God's sake," Biden said.

The President said, "To lose a child is like having a piece of your soul ripped away." He said the feeling is "suffocating."

The President called on the nation to pray for the victims and "stand up to the gun lobby" in the wake of today's events.

"So tonight, I ask the nation to pray for them, to give the parents and siblings the strength in the darkness they feel now. As a nation, we have to ask when in God's name are we going to stand up to the gun lobby? When in God's name will we do what we all know in our gut needs to be done?"

President Biden insisted on delivering a speech to the nation tonight in the wake of the horrific Texas shooting, aides said, demanding to his White House advisers that he address the latest unspeakable slaughter of children in America.

As he flew back to Washington and worked on his speech aboard Air Force One, the President referred to the tragedy of Newtown – and the disappointing aftermath when Congress failed to pass any gun safety legislation.

Biden, who was vice president at the time of the 2012 shooting at Sandy Hook Elementary School, was the point person for the Obama administration during that legislative push. He has often called that one of the biggest disappointments of his public life – unable to persuade enough senators to support even modest legislation.

The President helped write tonight’s speech “with Sandy Hook in mind,” a senior White House official said, “and his fervent belief that he cannot stop trying to push Congress.” 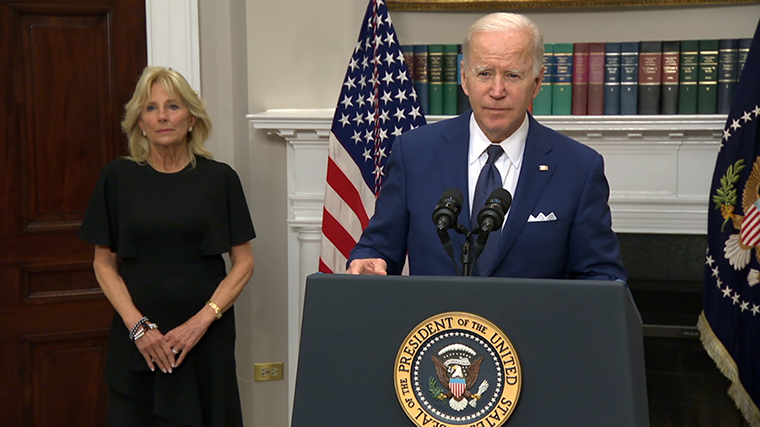 President Biden is addressing the nation after a shooter killed 18 children and one adult at Robb Elementary School in Uvalde, Texas, on Tuesday.

He just returned from a presidential trip to Asia, where he met Indo-Pacific leaders in a high-level summit.

The first was the gunman shooting his grandmother, resulting in her being airlifted to a hospital, Estrada said.

The second incident was the suspect crashing a vehicle near the elementary school.

“The suspect did crash near a ditch nearby the school," Estrada said. "That’s where he exited his vehicle with what I believe was a rifle and that’s when he attempted to enter the school where he was engaged by law enforcement. Unfortunately, he was able to enter the premises and then from there that’s when he entered several classrooms and started shooting his firearm.”

Estrada went on to say the gunman was seen with a "long rifle and backpack."

Estrada could not confirm what type of rifle the gunman had, but says the Bureau of Alcohol, Tobacco, Firearms and Explosives is investigating.

On Wednesday, DPS spokesperson Lt. Chris Olivarez clarified information about what the shooter was wearing. Olivarez told CNN that gunman was wearing "a tactical vest carrier with no ballistic panels; so typically those type of carriers are used by tactical teams, SWAT teams, where they can place magazines, extra ammunition inside those carriers and be able to move in a tactical formation."

This post has been updated with new details about the gunman from authorities.

Eighteen children and one adult were killed in Tuesday’s mass shooting at Robb Elementary School in Uvalde, Texas, according to Sgt. Erick Estrada of the Texas Department of Public Safety.

Estrada did not provide any other information on the victims.

Gov. Greg Abbott said earlier Tuesday “it is believed” that the shooter, 18-year-old Salvador Ramos was killed by law enforcement. Estrada confirmed the suspect was killed.