The 66-year-old woman in serious condition being treated at a San Antonio hospital is the shooter’s grandmother, officials confirmed Wednesday.

According to officials, the shooter’s grandmother had been airlifted in critical condition to the hospital Tuesday after being shot by the gunman.

“The first thing that happened was the gunman shot his grandmother in the face. She then contacted police. The gunman fled, and as he was fleeing had an accident just outside the elementary school and he ran into the school,” Gov. Greg Abbott said in a news conference earlier Wednesday.

In a televised CNN interview with Wolf Blitzer, Sgt. Erick Estrada, a public information officer for the Texas Department of Public Safety, echoed Abbott’s comments and confirmed the 66-year-old woman is the shooter’s grandmother.

University Hospital in San Antonio declines to comment on individual patients, but in a Wednesday morning statement confirmed they were treating three children and a 66-year-old woman, who is in serious condition after being downgraded from critical condition.

A vigil is underway in the Uvalde County Fairplex for the victims of the school shooting at Robb Elementary.

With 21 dead and 17 others injured, the attack was the deadliest school shooting in almost a decade and shook a nation still reeling from a mass shooting just 10 days ago.

"Amazing Grace" was played during the vigil as members of the community wept and hugged.

Watch a moment from the vigil:

More than 100 federal officers responded to Tuesday’s deadly school shooting in Uvalde, Texas, according to Customs and Border Patrol.

“When it was all said and done, we had over 80 officers immediately on the scene, and then right after that, 150 or so officers converged on this area,” Customs and Border Patrol chief Raul Ortiz told CNN on Wednesday.

Ortiz said those officers came from several divisions, including the Border Patrol, Air and Marine Operations and Homeland Security Investigations.

Jason Owens, who commands the Del Rio sector of the Border Patrol, told CNN the scene was incredibly disturbing.

“I took my agents back to the Uvalde section, and I had to bring new uniforms for them to change into,” Owens said. When asked why, Owens responded, “Covered in blood. What this person did was evil.”

The Robb Elementary School shooter was on the premises for up to an hour before law enforcement forcibly entered a classroom and killed him, officials said Wednesday.

“It's going to be within, like 40 minutes or something, [within] an hour,” Texas Department of Public Safety director Steven McCraw told CNN’s Ed Lavandera at a news conference.

Rep. Tony Gonzales, whose district includes Uvalde, told CNN’s Jake Tapper he was briefed that shooter Salvador Ramos was in a standoff with law enforcement for about a half-hour after firing on students and teachers.

Department of Public Safety spokesperson Sgt. Erick Estrada declined to be more specific about the timeline in a CNN interview Wednesday night.

Irma Garcia, a fourth-grade teacher at Robb Elementary School, has been identified as a victim in Tuesday's school shooting, CNN has confirmed through a GoFundMe site set up to raise funds for funeral expenses and family needs.

Garcia was a wife and mother to four children, the GoFundMe campaign says. "Sweet, kind, loving. Fun with the greatest personality. A wonderful 4th grade teacher at Robb Elementary that was a victim in a Texas school shooting in Uvalde, Texas," it added.

"She sacrificed herself protecting the kids in her classroom. She was a hero. She was loved by many and will truly be missed," the campaign went on to say.

Garcia's nephew John Martinez told the Washington Post that officials informed the family that she helped shield students from the gunfire.

According to Garcia's profile on the Uvalde Consolidated Independent School District website, she had been an educator for 23 years. It was her fifth year co-teaching with Eva Mireles, who was also tragically gunned down at the elementary school.

The bodies of nine victims of the Uvalde Elementary School shooting will be released to funeral homes this evening, Judge Lalo Diaz tells CNN.

Diaz is the justice of the peace for precinct 4 in Uvalde County.

The remaining 12 bodies of victims will be released either later tonight or tomorrow, Diaz said.

The body of the shooter is in another county’s morgue, Diaz noted, telling CNN that the priority is to handle the victims and then they will worry about his remains.

After Eva Mireles, a 4th grade teacher at Robb Elementary School, was killed in Tuesday's mass shooting in Uvalde, Texas, her daughter posted a tribute on Twitter.

"Mom, you are a hero. I keep telling myself that this isn’t real. I just want to hear your voice.” The tribute reads in part, “I want to thank you mom, for being such an inspiration to me. I will forever be so proud to be your daughter. My sweet mommy, I will see you again.”

Amber Ybarra, a family member of Eva Mireles, confirmed to CNN that the tribute was from Mireles’ daughter, Adalynn.

Mireles had been an educator for 17 years, according to her profile on the Uvalde Consolidated Independent School District website.

The gunman who shot and killed 19 children and two teachers inside Robb Elementary School in Uvalde, Texas, dropped a black bag full of ammunition outside of the school when he was “engaged” by the school resource officer (SRO), Sgt. Erick Estrada of the Texas Department of Public Safety (DPS) said.

When the shooter arrived at the school, he was encountered by the SRO who saw him carrying the large black bag, he told CNN’s Wolf Blitzer on The Situation Room.

“Inside that bag was actually more ammunition. He actually dropped that ammunition and ran inside the school where he barricaded himself inside one of the classrooms and unfortunately, that is where he started conducting his business of shooting innocent children, shooting the two innocent adults that were inside that classroom,” he said.

The shooter dropped the bag during that interaction and ran inside the school, Estrada said.

DPS is still investigating what happened during that interaction, but during an earlier conference, DPS Director Steven McCraw said that no shots were fired in that interaction.

Estrada spoke of the heartbreak in the community following the mass shooting.

“I’m a father of two children,” Estrada said. “It took me a while to even step out my vehicle and know what I was about to see inside that school.”

President Biden announced he will visit Texas "in the coming days" to meet the grieving families after a gunman killed 19 children and two adults at the Robb Elementary School in the town of Uvalde on Tuesday.

More information has come to light about how Tuesday's events unfolded and the lives claimed by the gunman:

Here's a look at the order of events on Tuesday:

The city and the school: 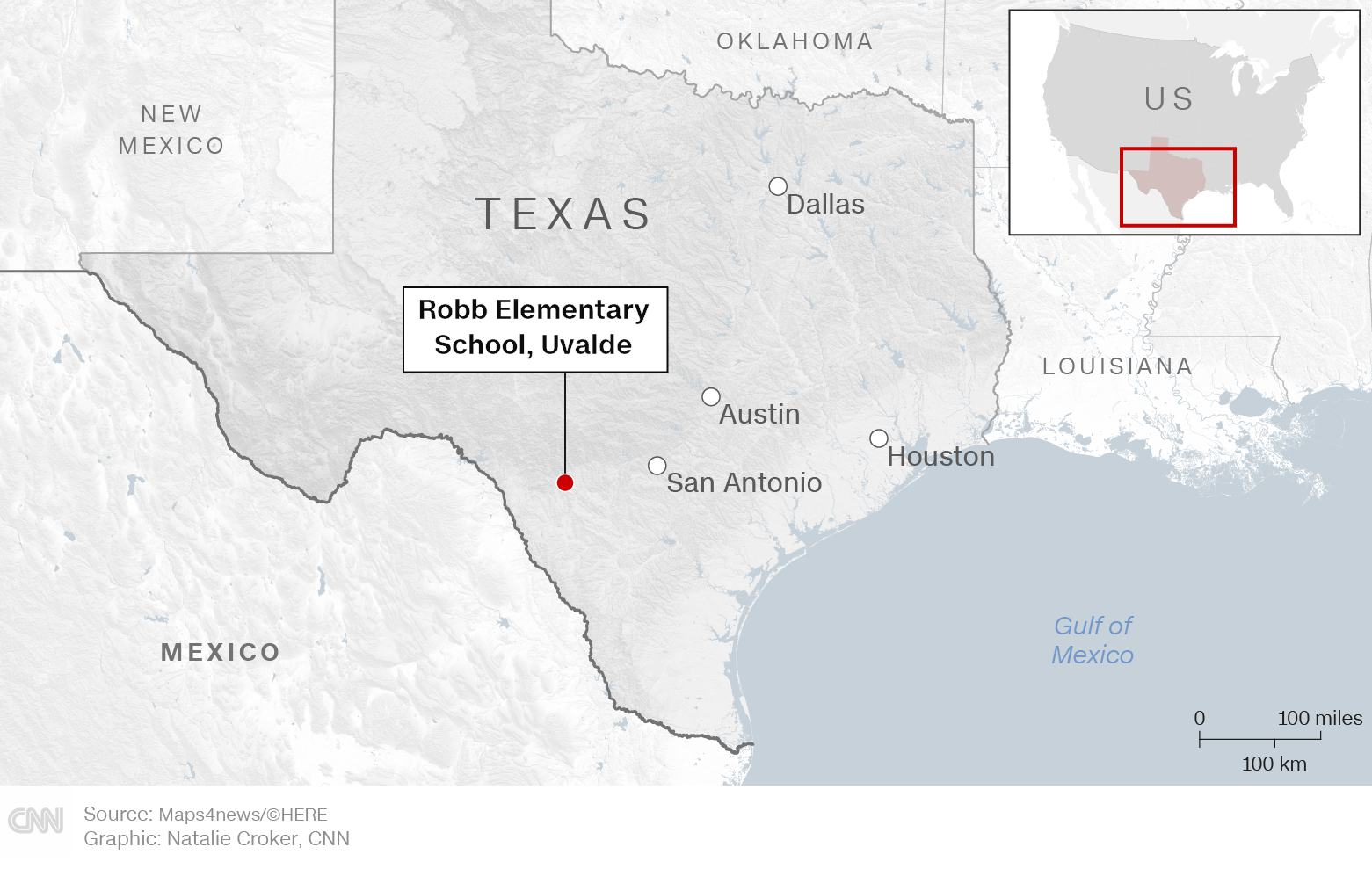 Remember: Tuesday's massacre is the deadliest school shooting since 2012, when 26 children and adults were killed at Sandy Hook Elementary School. This is at least the 30th shooting at a K-12 school in 2022, according to a CNN tally.