Tuesday's shooting at a Texas elementary school, which has left at least 19 children and two adults dead, marked another instance of a uniquely American tragedy.

The shooting is the latest entry in the long history of gun violence in the United States. Before Tuesday, there had been at least 39 shootings in K-12 schools, colleges and universities in 2022, resulting in at least 10 deaths and 51 injuries.

While proposals to overhaul gun laws -- such a ban on assault-style weapons or high-capacity magazines -- face steep odds at the federal level, there are some areas of bipartisan agreement. Whether that's enough to break congressional gridlock is yet to be seen. 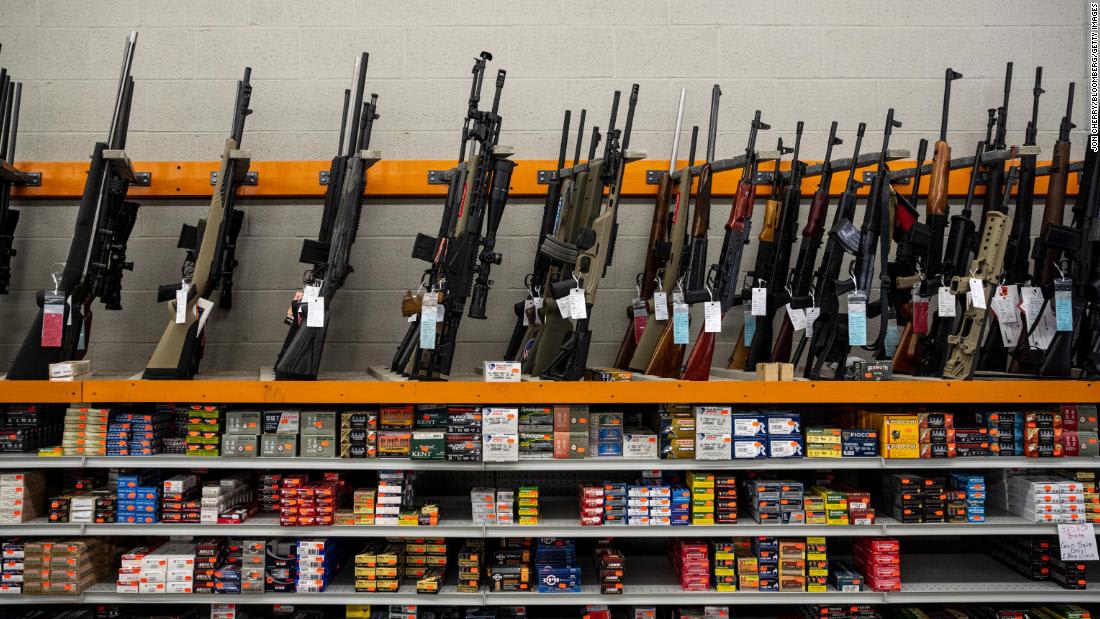 Gun legislation is stalled in Congress. Here's why that won't change anytime soon.

“Guns shouldn't be as easily accessible. Like it's easier to get a gun than baby formula right now. That's unbelievable in this country that we live in,” Lee said to reporters.

Noting there have been more mass shootings in 2022 than the number of days, Lee added, “We need to be better than that. It's supposed to be, you know, the greatest country in the world, and it's just ridiculous. This is senseless, losing our lives.”

The game, in which the Mavericks defeated the Warriors 119-109, was played in Dallas. Game 5 will be played Thursday night in San Francisco.

Some context: Prior to Tuesday’s game, Warriors head coach Steve Kerr told reporters "basketball questions don't matter" right now, referencing the mass shooting, adding, "When are we going to do something?"

A fiery Kerr called out "50 senators who refuse to vote on HR-8," a House bill that strengthens firearm background checks, claiming, "They won't vote on it because they want to hold onto their own power."

"50 senators in Washington are going to hold us hostage," Kerr said. "It's pathetic, I've had enough." 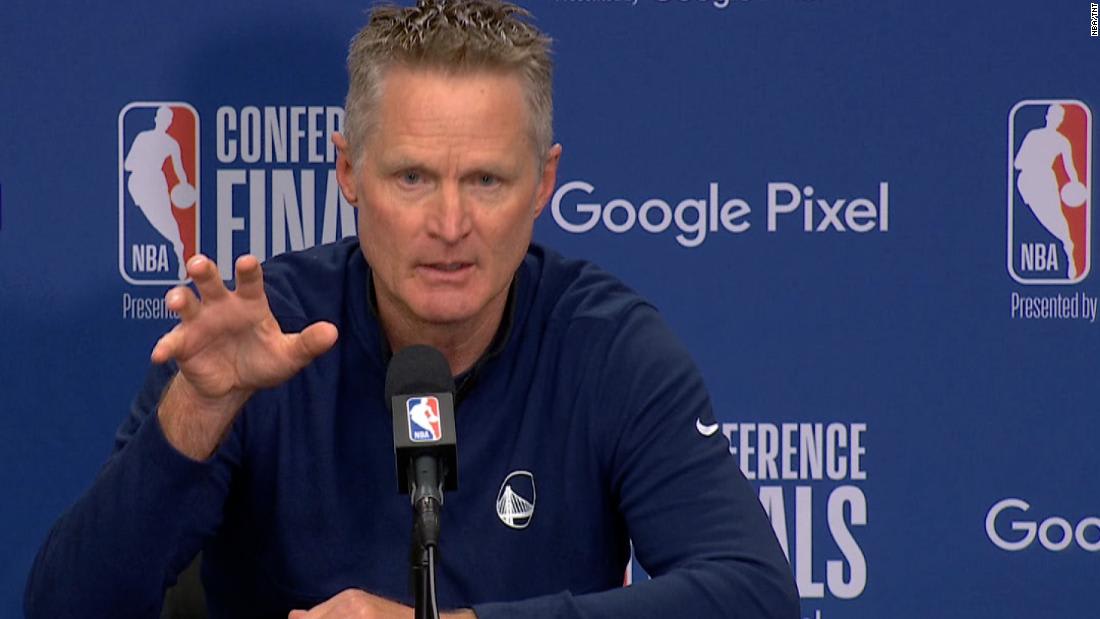 Video: NBA's Steve Kerr on school shooting: When are we going to do something! - CNN Video

Golden State's Steph Curry said at a postgame press conference he appreciated Kerr's leadership and comments, and that the shooting "was on everybody's mind coming into the game."

"I can't even imagine the pain for Coach to say what he said, and every word he said was powerful, was meaningful," Curry said.

"Mass shootings have become America's copy and paste tragedy," Politico's Tyler Weyant wrote Tuesday evening. "We change the place, the town, the number of dead and injured. But the constant is lives lost, people who cannot be brought back, and the nation is left in a numb daze."

At least, until, it happens again. In this case, it only took 10 days from the last slaughter for another spasm of senseless violence and terror to force the nation to go through the motions once again.

It's all so predictable and formulaic at this point. First come the initial reports of a shooting, then details about fatalities and injuries, then details about the shooter and motive, and finally the tributes to the dead. All the while, there are widespread calls for the US to take some -- any -- action to stop these regular massacres from occurring while Fox personalities and GOP leaders insist the shooting shouldn't be "politicized." 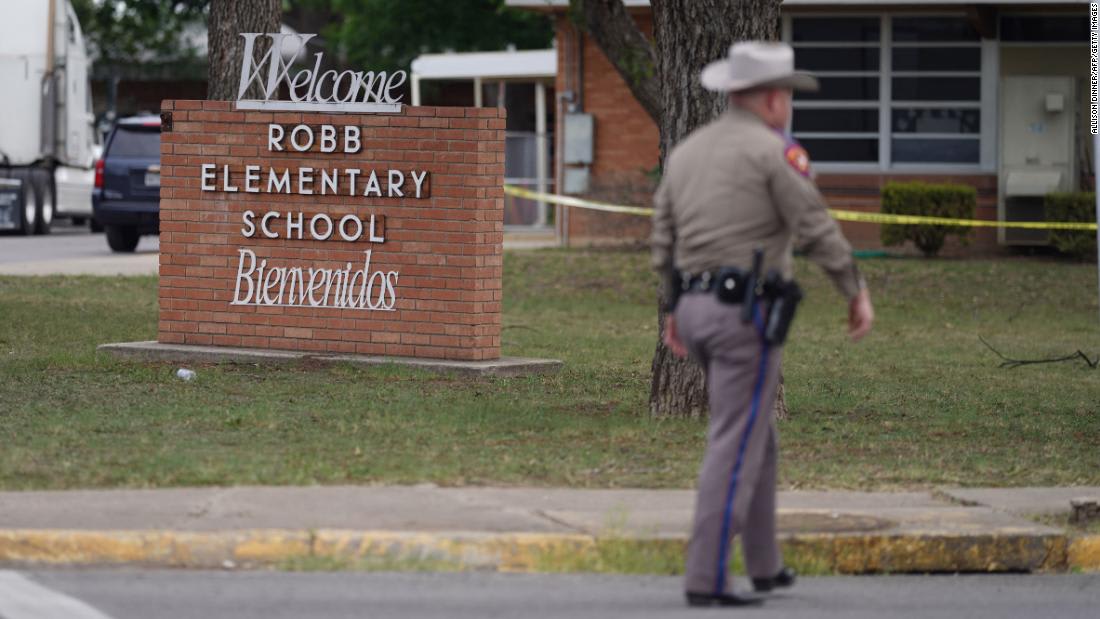 Matthew McConaughey, who was born in Uvalde where at least 21 people were killed Tuesday, described gun violence as an "epidemic we can control."

"Once again, we have tragically proven that we are failing to be responsible for the rights our freedoms grant us," the 52-year-old actor said in a statement.

"The true call to action now is for every American to take a longer and deeper look in the mirror, and ask ourselves, 'What is it that we truly value? How do we repair the problem? What small sacrifices can we individually take today, to preserve a healthier and safer nation, state, and neighborhood tomorrow?' We cannot exhale once again, make excuses, and accept these tragic realities as the status quo," he said on Instagram.

McConaughey called on all Americans to "renegotiate our wants from our needs," adding that "we have to rearrange our values and find a common ground above this devastating American reality that has tragically become our children’s issue."

"This is an epidemic we can control, and whichever side of the aisle we may stand on, we all know we can do better. We must do better. Action must be taken so that no parent has to experience what the parents in Uvalde and the others before them have endured.
"To those who dropped their loved ones off to school not knowing that today was goodbye, no words can comprehend or heal your loss, but if prayers can provide comfort, we will keep them coming."

Some background: The star of movies such as "Dallas Buyers Club" and "The Lincoln Lawyer" has maintained a close relationship with his home state -- and last year weighed a run for governor.

When he decided not to run, he said in part:

"As a simple kid born in the little town of Uvalde, Texas, it never occurred to me that I would one day be considered for political leadership. It is a humbling and inspiring path to ponder. It is also a path that I'm choosing not to take at this moment," he said.

In response to the Uvalde elementary school mass shooting, the Roman Catholic Archbishop of San Antonio called on elected officials to work with citizens toward preventing such attacks in the future.

“When will these insane acts of violence end; it is too great a burden to bear. The word tragedy doesn’t begin to describe what occurred. These massacres cannot be considered ‘the new normal,’" Archbishop Gustavo Garcia-Siller, said in a statement.
“The Catholic Church consistently calls for the protection of all life; and these mass shootings are a most pressing life issue on which all in society must act  — elected leaders and citizens alike.
“We pray that God comfort and offer compassion to the families of these little ones whose pain is unbearable. They must know that we are with them and for them. May the Lord have mercy on us all.”

The gunman, identified by officials as Salvador Ramos, is dead and is believed to have acted alone. Texas Gov. Greg Abbott said the 18-year-old suspect had attended Uvalde High School.

The shooting was the deadliest at an elementary school since the 2012 Sandy Hook massacre in Connecticut that left 26 people dead, including 20 children between 6 and 7 years old.

A former classmate of school shooter Salvador Ramos said the gunman texted him photos of a firearm he had and a bag full of ammunition days before the attack.

The friend, who did not want to be identified by name, said he was somewhat “close” to Ramos and would hear from him occasionally to play Xbox together.

“He would message me here and there, and four days ago he sent me a picture of the AR he was using … and a backpack full of 5.56 rounds, probably like seven mags.” “I was like, ‘bro, why do you have this?’ and he was like, ‘Don’t worry about it,’” the friend said. “He proceeded to text me, ‘I look very different now. You wouldn’t recognize me,’” he added.

The friend said Ramos was taunted by others for the clothes he wore and his family’s financial situation, and eventually was seen less in class.

“He would, like, not go to school ... and he just, like, slowly dropped out,” the friend said. “He barely came to school.”

He said that after his own graduation, he communicated with Ramos less. But every few months, Ramos would send a text or ask to play Xbox, he said.

Fred Guttenberg's daughter, Jaime, was one of 17 people killed in the 2018 mass shooting at Marjory Stoneman Douglas High School in Parkland, Florida.

He spoke with CNN's Anderson Cooper on Tuesday, just hours after 18 children and one adult were killed in Uvalde, Texas.

Guttenberg said news of another shooting is infuriating "because all of these instances we know the next one is going to happen because we haven’t done anything to fix it."

“I’m just so broken. What’s even worse, it’s not like this country doesn’t want to fix this,” he said.

When asked what message he'd give to families in Uvalde, Guttenberg quoted something his rabbi told him at his daughter's funeral: "We don't move on, we move forward."

The photo was posted as a story under the username “salv8dor_.” Multiple classmates confirmed the account belonged to suspected gunman Salvador Ramos, who was shot dead by officers responding to the school shooting.

Ramos’ TikTok page has only a single post – a clip of a Subway Surfers mobile game. The bio under his profile picture reads: “Kids be scared irl” or in real life.