There are nearly 500,000 customers are without power across Alabama, Georgia and Florida as a result of Hurricane Michael according to utilities and emergency management.

Key thing to know: It's important to note these are customers. If there are eight people living in a house, for example, that's just one customer, but a whole lot more people who don't have air conditioning, a means to charge their phones, or a working refrigerator tonight.

Hurricane Michael is now a Category 1 storm with winds of 90 mph.

The center continues to move through southwest Georgia, and is located 20 miles from Albany, GA.

But the powerful and historic Category 4 hurricane that slammed into Florida's coast is no more.

Governor Kay Ivey requested an emergency declaration from President Donald Trump for Hurricane Michael recovery according to a tweet from Ivey.

The declaration would allow for preemptive federal assistance for debri removal, generators and other resources according to the tweet.

The White House shared a photo just now that shows President Trump talking to Georgia Gov. Nathan Deal on his way to a rally in Erie, PA. It also sent a photo of Trump talking to Alabama Governor Kay Ivey.

Earlier, the President said that while some had suggested he cancel tonight's rally, it wouldn't be fair to those that were in line to see him speak.

The White House said he would be taking calls on the plane, so this appears to be proof that that's exactly what the President did while en route.

“We knew this was going to be a dangerous storm situation,” he told CNN Wednesday.

“It was going to develop very rapidly over very warm waters over the Gulf of Mexico. I think people have gotten used to seeing hurricanes come across the Atlantic and have five, six, seven days to be working with this.”

Gulf storms, however, intensify much more rapidly, especially in the fall.

“It doesn’t give you those four, five, six days as a hurricane to prepare for either as an agency or an as an individual,” he said.

Uccellini added, “This story isn’t over yet in terms of the impact that this storm is going to have.”

Reid Garrett's apartment building in Panama City, Florida, is still standing, but he said his neighborhood was damaged by the storm.

"We are safe. Just a lot of damage to every building around here. It’s really, really bad. Now the flooding is starting," he told CNN.

Wind gusts blew out windows in homes and office buildings, including the First Federal Bank and Medical Sacred Heart.

The hospital said it is running off of generators and patients have been moved to safe areas of the facility.

In Panama City Beach, the siding was ripped off this building.

The center of the storm is moving toward Albany, Georgia, at 13 mph.

It is still dangerous storm packing winds of 100 mph, which is Category 2 on the Saffir Simpson Scale.

Dangers continue through the evening with strong winds, possible tornadoes and flash flooding across Georgia. 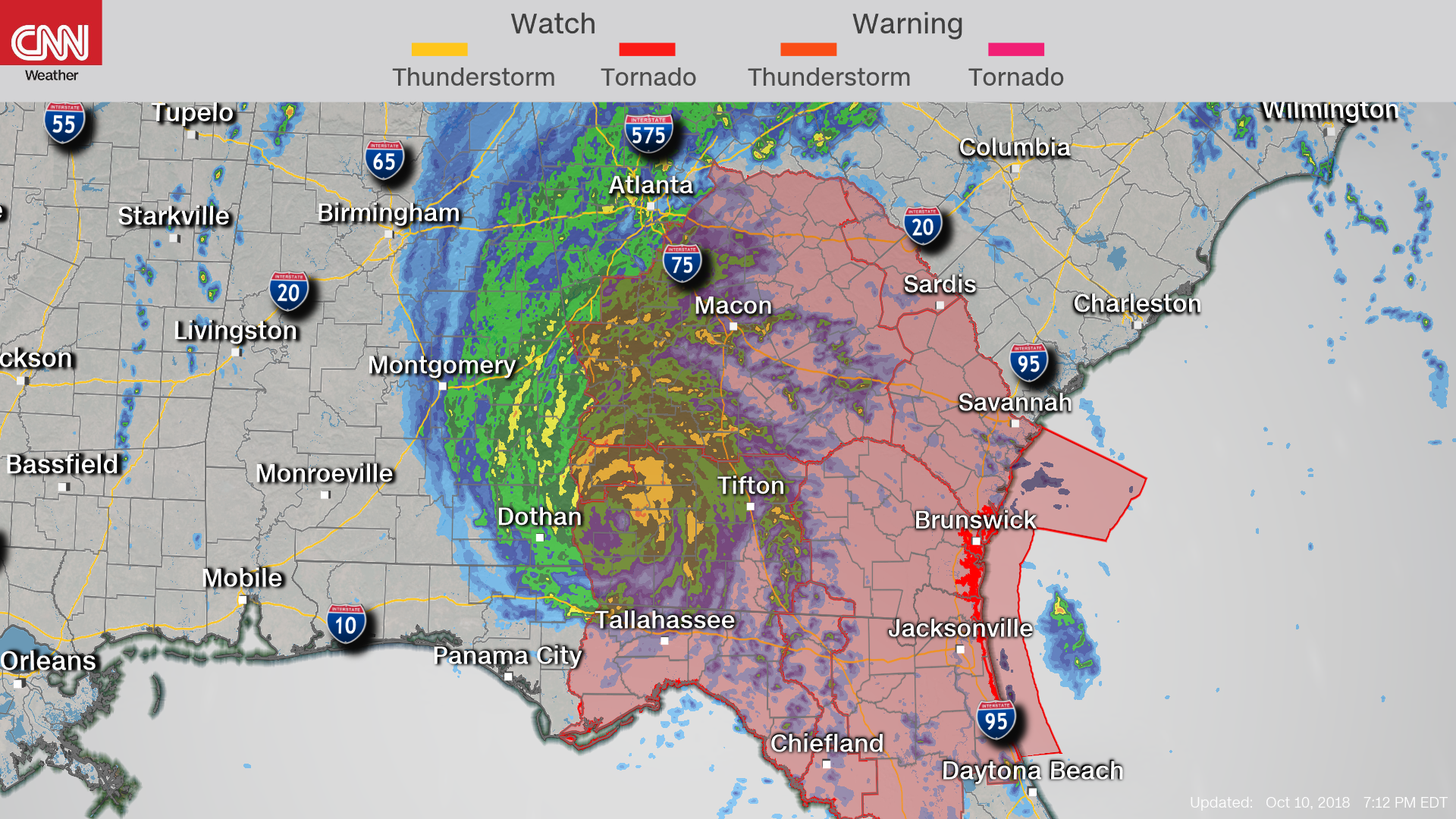 Florida Republican Sen. Marco Rubio urged state residents in the path of Hurricane Michael to not let their guard down.

“My top concern is that somebody’s out there hearing that this thing passed through and now it’s the time to go back and check it out and then you get the storm surge come in,” he told CNN.

“It’s a time of incredible caution,” he said. “Every time we have these storms, somebody loses their life in the aftermath for a lot of different reasons.”