Our live coverage has ended for the day. You can read more here.

Jack Hamilton, an Associate Professor of Media Studies and American Studies at the University of Virginia, said two of the shooting victims were his students and were positive influences on the class.

Devin Chandler was his student in the spring, and Lavel Davis was in his class this semester, Hamilton said.

"I am so indescribably sad right now but I wanted to share a few memories of them, because they were wonderful people," he wrote.

"devin was new to uva last spring (he was a transfer student) and I had him in a large lecture class. he nevertheless made a point to come to my office hours repeatedly, often just to ask questions about how things worked around uva.

"later i helped him declare his american studies major, which he was really excited about. he was an unbelievably nice person, always a huge smile, really gregarious and funny. one of those people who's just impossible not to like. it is so sad and enraging that he is gone.

"lavel was quieter than devin (at least in my experience) but was also such a nice guy. after our first day of class this semester he made a point to come up and shake my hand and told me I should call him vel.

"one thing that struck me about vel was how much his classmates liked him and vice versa. in my experience star athletes often tend to hang out with other athletes (understandable, given the time commitment) but vel seemed to go out of his way to make friends with non-athletes.

"anyways I am just stunned and devastated and completely at a loss but wanted to say all this because they were great people with truly limitless futures and they should still be here. it breaks my heart."

Chandler, Davis and D'Sean Perry were killed in the shooting on Sunday night.

The UVA shooting suspect was taken into custody Monday after a Henrico Police officer spotted the vehicle in the eastern part of the county, police said Monday afternoon.

Henrico Police officers had been on the lookout for the vehicle since the shooting late Sunday.

After being spotted, he was arrested without incident in Henrico County, located in the greater Richmond area, about 75 miles from Charlottesville.

One of the UVA students who was shot on Sunday night remains in critical condition, and the other injured student is in good condition as of Monday afternoon, UVA spokesperson Brian Coy said.

UVA is currently not releasing the identities of the students “out of respect for their privacy,” according to Coy.

In addition to the two injured students, three students were killed in the shooting.

A number of current University of Virginia football players reacted to the news that three of their teammates -- Devin Chandler, D'Sean Perry and Lavel Davis Jr. -- had been killed in a shooting on campus Sunday night.

In addition, the Wisconsin football program offered its condolences and memories of Devin Chandler, who transferred from Wisconsin to Virginia prior to this season.

"Devin was a tremendous young man and a great teammate. He will be greatly missed," Wisconsin football said. "This is a difficult time for our players and staff because of the lasting impact Devin had on his friends and teammates. Our thoughts go out to his family, friends and the Virginia Football family."

"I was shocked and saddened to hear of Devin’s passing. He had a lasting impact on his teammates, even after he left UW, which is a testament to the type of person he was. His personality was infectious and he was a joy to be around. Our team is hurting for him and his family. I want to personally extend my condolences to his family and the Virginia football family," he said.

UVA Police Chief Tim Longo was speaking to the public about what police knew about the shooting suspect midday Monday when he was pulled aside by a fellow law enforcement official.

The official whispered a few words into his ear, and Longo returned to the podium.

Longo then stood in silence for about 25 seconds.

"I just need a moment to thank God," he said, cracking a smile, "breathe a sigh of relief."

The moment begins about 55 seconds into the below video: 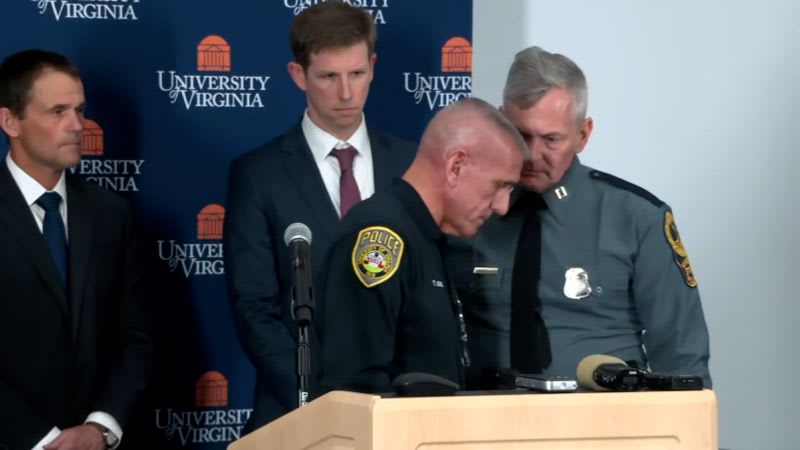 The bus that was the site of the mass shooting at UVA on Sunday night was towed away from the campus on Monday afternoon.

A window on the back-left side of the bus appeared to be damaged by a gunshot.

UVA officials said the shooting took place on the charter bus, which had just returned to campus from Washington DC for a class field trip. The suspect and all of those shot were UVA students.

"We are grateful to the law enforcement personnel across the Commonwealth for their efforts to locate and apprehend the suspect," the statement said.

Public safety officials for the county and city are assisting the investigation, the statement said, and residents should "expect to see police activity and an increased security presence throughout the community."

Two 21-year-old UVA students who witnessed part of Sunday night's shooting and called 911 spoke to CNN on Monday about their experiences.

The students, both 21 and in their fourth year at UVA, said they were walking to the gym when they passed by the area and noticed the moving charter bus.

Just after 10 p.m., they heard faint popping noises, but didn’t think anything of it. The bus was going over a speed bump, and then they saw the bus stop and the emergency lights go on. The bus doors opened and people ran out of the bus, and one person fell to the ground, they said.

When they saw the people running, they hid in front of the band building behind a brick wall. They waited there and called 911 at 10:17 p.m., the students said. The call wasn’t answered, but they hung up when they heard sirens in the distance and saw law enforcement arrive.

Once they knew they were safe, they walked past the bus and saw a woman with blood in her leg being treated.

They said they saw two people running from the bus -- one whose description matched what the suspect was wearing.

The students said they did not want to be on camera or identified.