All available evidence suggests the coronavirus originated in bats and was not a “laboratory construct”, World Health Organization spokesperson Fadela Chaib said at a briefing in Geneva today.

US intelligence and national security officials say the United States government is looking into the possibility that the novel coronavirus spread from a Chinese laboratory rather than a market.

“At this stage, it is not possible to determine precisely the source of the virus which caused the Covid-19 pandemic,” Chaib said at a briefing. “However, all available evidence suggests that the virus has a natural animal origin and is not a manipulated or constructed virus. The virus most probably has its ecological reservoir in bats.”

“Many researchers have been able to look at its genomic features — and they have found that the evidence does not support the idea that the underlying virus is a laboratory construct.”

Chaib says people should focus on facts – not “spurious theories” about the origins of the virus.

Jean Chatsky, a finance journalist and CEO of HerMoney.com, is answering some of your most pressing questions about the coronavirus and their money.

One viewer asked: “Is the virus stimulus check going to be adjusted when I file for 2020 tax returns? Is this amount going to reduce my refund for next year?”

Here's how she responded:

“It is not … This is not counted as part of your adjusted gross income. You will not have it pay the money back, the government put it out there because they wanted people to be able to put food on the table. So don't worry about that.”Chatsky added that for people who receive social security, survivor or disability, or get a railroad retirement benefit, and have a child, they have to go to the IRS website to let them know they have a dependent under age 17 in order to get an extra $500 check.

﻿Officials are still working to draft the executive order suspending immigration to the United States that President Trump tweeted about late last night, according to an administration official. They hope to have it completed in the next few days for Trump to sign.

While the language is still being finalized, the order is expected to temporarily halt the issuance of new green cards and work visas — steps that had already effectively been in place amid the coronavirus pandemic.

Other aspects of the order remain unclear inside the administration, including what legal authorities the President will rely upon in the order and what other elements of immigration — including family immigration and potential exemptions — might be included.

Officials were also weighing expanded travel restrictions beyond the current bans in place from China and Europe, the official said.

The order is expected to include some exemptions for farm workers and health care providers, according to the official, but could also exempt some other workers deemed “essential.”

An administration official told CNN the executive order will be a “temporary 120 days or so” halt on “some” work visas to mitigate some of the unemployment concerns.

Some background: Trump tweeted last night that he will sign an executive order temporarily suspending immigration to the United States as the nation battles the health and economic effects of the coronavirus pandemic.

"In light of the attack from the Invisible Enemy, as well as the need to protect the jobs of our GREAT American Citizens, I will be signing an Executive Order to temporarily suspend immigration into the United States!" he tweeted.

The US needs to be able to perform millions of coronavirus tests each week before restrictions can be safely lifted, economists and public health experts say in two different plans for reopening society.

The two reports differ in their recommendations for just how much testing is needed. One calls for 3 to 30 million tests a week, while the other says the country will need to be doing 20 million tests a day to get a handle on the pandemic.

Both proposals, though, cast doubt on the country's readiness to relax social distancing measures, which some states are already beginning to do.

So far, the US has only performed about 4 million coronavirus tests, and governors have reported continued shortages of the materials needed to run tests, from chemical reagents to swabs. 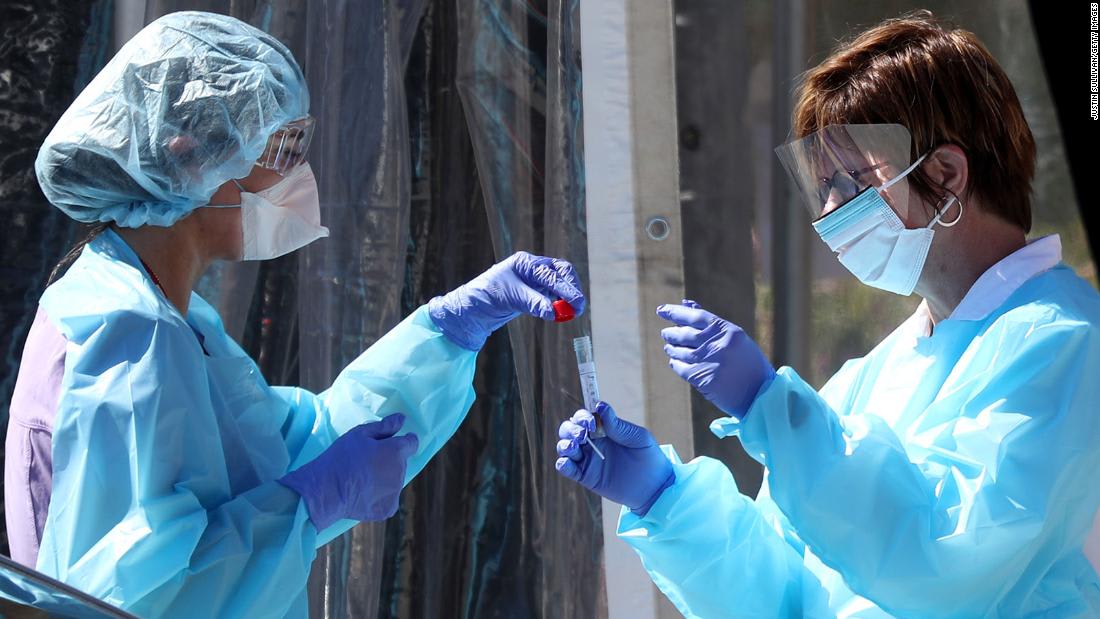 The US needs to perform millions of coronavirus tests per week, experts say

New York City Mayor Bill de Blasio slammed President Trump’s response to the coronavirus, saying that he has “a misunderstanding of this enemy that we are facing.”

“He's doing this kind of false optimism, acting like it's going to be easy to come back,” de Blasio said. “It's not going to be easy, but we will do it. But if we jump the gun, we're going to regret it.”

De Blasio said he has spoken to President Trump about restarting the city’s economy.

“We can't do that if we cannot even function as cities,” he said. “I heard dead silence — had a number of conversations with him, have heard nothing back. And he's a New Yorker — he was, now he lives in Florida — but he's literally said nothing about how to help the place that's been the epicenter to get back on its feet.”

De Blasio said Trump should be laser-focused on two things: testing and the economic stimulus.

“These are the two things he's dropped the ball on,” de Blasio said. “And I think history is going to judge him very harshly and put him in the same camp as Gerald Ford and even Herbert Hoover, who ignored what the Depression was doing to people and failed to bring the country back. That's where this President is now. And he should kiss his reelection goodbye if he thinks he's going to be able to convince the American people to want four more years of a guy who can't even get the basics right.”

De Blasio also discussed his decision to cancel all public events through June. “It’s so sad, but we're still talking about hundreds of people dying a day. We've got to make sure we get this right once and for all,” he said.

The NAACP, National African American Tobacco Prevention Network and Council on Black Health have written a joint letter to the US federal government requesting specific actions to address the racial disparity seen in Covid-19 cases and the disproportionate impact the pandemic has had on the black community in the United States.

The letter, published last night, includes signatures from more than a dozen organizations and outlines specific short-term and long-term requests for lawmakers.

In the short-term, the groups call for...

In the long-term, the groups call for an increased federal minimum wage and additional investments made in health care, among other requests.

"Increasingly, the data on COVID-19 underscore why our organizations exist and are joining forces at this time: Now more than ever, Black people are paying the price for our short- and long-term policy failures through compromised health and an early demise," NAACP President and CEO Derrick Johnson said in a press release on Tuesday. "Enough is enough."

Georgia Republican Gov. Brian Kemp announced Monday that certain businesses can reopen this week in a move that breaks from the majority of state leaders and defies the warnings of many public health officials.

According to an influential model often cited by the White House, from the Institute for Health Metrics and Evaluation, Georgia hit its projected "peak" for daily deaths 13 days ago, on April 7.

But that same model predicts that dozens of people will die each day in the coming week. And to limit a resurgence of the virus, the model says that Georgia shouldn't start relaxing social distancing until after June 15 — when the state can begin considering other measures to contain the virus, such as contact tracing and isolation.

Notably, Kemp said Monday that no local ordinance can restrict the openings, which will be implemented statewide.

Tennessee Gov. Bill Lee announced his statewide stay-at-home order will expire April 30, and the vast majority of businesses in 89 counties allowed to reopen on May 1. Businesses may open even sooner, he said.

America has an inequality problem and the coronavirus crisis is making it worse.

The pandemic is leaving few people untouched, but America's weakest demographic groups are shouldering the worst burden through job losses and frontline work, against a backdrop of a higher risk of infections and lower savings.

Lower earnings: The average black and Hispanic families are already bringing in less income, earning between 71 cents and 74 cents for each dollar earned by the median white family, according to a new report from the JPMorgan Chase Institute.

Fewer safety nets: Minority families also have a smaller buffer of liquid assets like savings and investments, meaning they have a much thinner cushion to fall back on to weather the storm of economic shocks.

Vulnerable to layoffs: Black and Hispanic workers are also more likely than white workers to be in jobs that pay by the hour, making them more susceptible to layoffs.

A total of 22 million Americans have filed for unemployment benefits over the past month.

"As families face job loss and income uncertainty resulting from the Covid-19 pandemic, this report shows that black and Hispanic families will bear the brunt of this economic crisis," said Diana Farrell, president and CEO of the JPMorgan Chase Institute.

Related Coverage: America's black and Hispanic communities are bearing the brunt of the coronavirus crisis

President Trump suggested Monday that there could be a Senate vote on a supplemental small business package Tuesday.

“Hopefully, tomorrow the Senate’s going to be able to vote. A lot of progress has been made on that, tremendous progress, great plan,” Trump said.

He said he hoped to have a vote in the Senate on Tuesday.

Trump said his administration is pushing for an additional $75 billion for hospitals and other healthcare providers in the deal.

The Senate will try to pass a deal as soon as Tuesday afternoon, according to Majority Leader Mitch McConnell.

Sources tell CNN House Speaker Nancy Pelosi told House Democrats that a deal could be reached as soon as tonight and said if there's a deal tonight, the vote in the House will be Wednesday. If the deal comes together Tuesday, she said, the House vote will be Thursday.