A key coronavirus model often cited by the White House tweaked its projections Thursday, now saying that some states must wait even longer to safely reopen.

Georgia won’t be able to safely reopen until at least June 22, according to the newest edition of the model. On Tuesday, the model gave the state a projection of June 19.

Georgia is planning to begin reopening tomorrow, however, despite criticism from public health experts who have repeatedly stressed the dangers of relaxing social distancing measures too early.

The peak number of daily deaths for Georgia isn’t expected to occur until April 29 — almost a week from today. More than 50 people are expected to die that day, according to the model.

Built by the Institute for Health Metrics and Evaluation at the University of Washington, the model uses a “threshold” of one case per million residents to determine when it might be safe for a state to reopen. That’s the level at which states may be able to use other containment measures – such as aggressive testing, contact tracing and isolation – instead of social distancing, according to IHME.

The model refined its projections for other states as well:

The estimated death toll for the United States has been revised upwards as well. A total of 67,641 people are now predicted to die by August, compared to the 64,976 deaths that were previously projected.

Remember: While the institute’s model has been influential, it is just one of many, and IHME has warned against relying too heavily on its projections.

“If I were a governor of a state, I would certainly not make a decision based just on our model,” IHME Director Dr. Christopher Murray said in a virtual press briefing on Friday.

Here's a look at the updated reopening map: 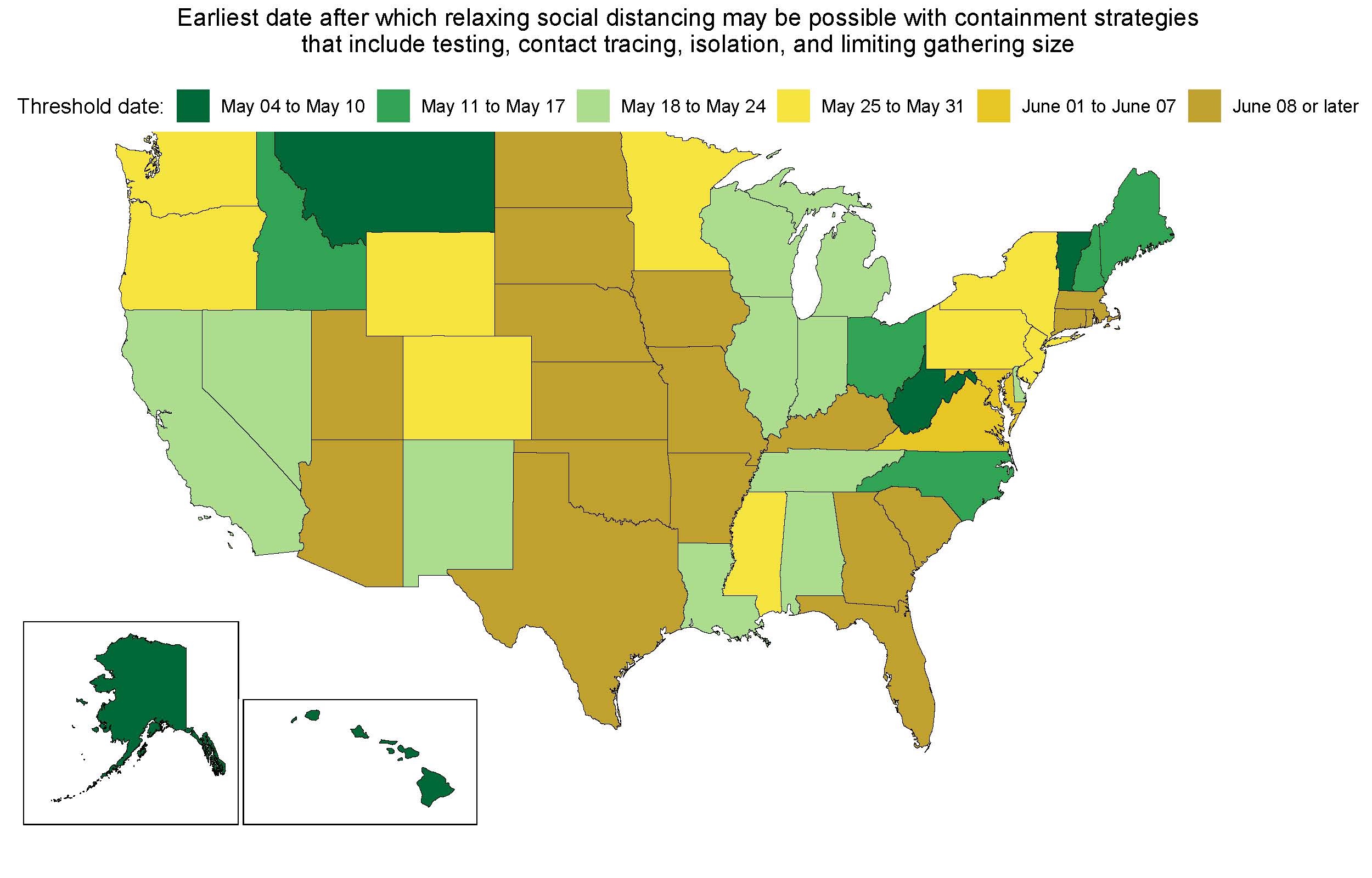 Illinois Gov. J.B. Pritzker will sign a modified version of the state's stay-at-home order that will go into effect on May 1 and extend it through May 30, he announced in a news conference today.

In the new order, face coverings or a mask must be worn by anyone over the age of two when in public, if a 6-foot social distance can’t be maintained.

Retail stores that are not considered essential may take phone and online orders for delivery or outside store pick-up.

Some state parks will have a phased reopening, and groups of no more than two people will be allowed to go fishing or boating. Golf will also be permitted under strict conditions.

Animal grooming, greenhouses, garden centers and nurseries are now considered essential businesses. The businesses may open if the stores are following social distancing. Employees and customers must wear face coverings.

Minnesota Gov. Tim Walz announced Thursday an order to keep schools closed for the remainder of the academic year to contain the spread of Covid-19.

“Today’s executive order will continue distance learning until the end of the school year,” Walz said at a news conference.

“There is no joy in this but there is an awful lot of thanks,” the governor said before thanking students, teachers and parents for their patience during this time.

Walz also spoke directly to students: “You will not be defined by staying home and missing proms and missing graduations, you will be defined by understanding how interconnected our world is and what it means to come together to try and solve hard problems.”

“The closeness of the classes of 2020 will be much closer than any that has come before," he added. “This ties you together in a way that has never been seen.”

Domestic terrorists "probably will continue to threaten violence" in response to the Covid-19 pandemic until the virus is contained and the normal routine of US societal life resumes, according to the Department of Homeland Security.

The federal government has been warning that the pandemic is likely to be exploited by violent extremists.

In an intelligence note issued today, DHS warned the southwest region that recent incidents in Florida and nationwide highlight Covid-19 as a driver of violent threats.

For example, on March 24, an individual was arrested for allegedly threatening to blow up the Orlando Police Department’s headquarters and other buildings, because people are being “put... out of work” due to the Covid-19 crisis.

As the Covid-19 threat expands throughout the US, the violent extremist threat has the potential to increase in "frequency and severity," the note said.

The pandemic has created a new source of anger and frustration for some individuals, according to DHS, and as a result, extremist plots will likely involve individuals seeking symbolic targets of personal grievance.

Californians who saw their federal stimulus checks vanish after being garnished by banks will get that money after all.

For those people who had money taken, Newsom told banks, “You gotta give ’em back.”

The governor noted one major caveat in the debt relief; it does not apply to child support or spousal support. Any deductions for that will remain in force.

Of the 24 student loan service providers in California, 21 of them are offering forbearance on loans for more than a million Californians struggling to pay that debt.

Loan holders will get a 90-day reprieve with no late fees or fines, and no reports to credit bureaus.

South Carolina Gov. Henry McMaster said that when it comes to reopening, “we want to go as quickly as we can, as safely as we can to restore our economic vigor while also restoring our economic health.”

At the first meeting of accelerateSC — the advisory team created to revitalize South Carolina’s economy — McMaster said “the last thing any of us want is to have a relapse…it’s probably going to happen some places, but we do not want that to happen here.”

The governor said his state has approached reopening “a little bit differently” from other states, with a “lighter touch.”

While other states designated businesses as essential or nonessential, South Carolina looked at what activities posed the greatest risk and focused on minimizing those activities.

Some background: McMaster announced earlier this week that South Carolina would reopen some beaches and retail stores.

McMaster said he spoke to President Trump yesterday and that the President said, “we were doing an excellent job in South Carolina.”

Yesterday marked the deadliest day for coronavirus in California with at least 115 deaths, Gov. Gavin Newsom announced in his daily update on the status of Covid-19 in the state.

“This disease killed more people in the state of California in the last 24 hours than in any previous 24 hours,” Newsom said.

The governor noted some small glimmers of hope, with the numbers of hospitalized people and intensive care unit patients showing slight decreases.

“We are seeing some stabilization of that curve,” the governor said, but he cautioned that “we aren’t out of the woods yet.”

The total number of confirmed coronavirus cases in California has climbed to more than 37,000.

About those numbers: The New York City Health Department defines probable deaths as people who did not have a positive Covid-19 laboratory test but their death certificate lists “COVID-19” or an equivalent as the cause of death

There have been at least 141,754 coronavirus cases in the city and approximately 36,723 people have been hospitalized, according to the city.

The US Naval hospital ship that has been docked off the coast of New York City will depart the area as early as the end of the month, according to a US Navy official.

There are currently 39 patients still aboard USNS Comfort, and officials are working to ensure that they are safely transferred or discharged prior to the ship’s departure.

The current plan is for the Navy hospital ship to return to its home port in Norfolk, Virginia.

About the ship: Earlier this week New York Gov. Andrew Cuomo said the hospital ship was no longer needed, just about two weeks after requesting that the ship treat Covid-19 patients.

On April 6, President Trump granted New York state’s request that the ship begin treating Covid-19 patients. The ship’s original task was to treat only non-coronavirus patients to relieve the burden from local hospitals.