Tripadvisor announced today that it will lay off 900 employees, or roughly 25% of its workforce, because of the coronavirus pandemic's impact on demand for travel.

The company also said it would put a "number" of employees on furlough for an unspecified time and shutter its San Francisco and Boston offices.

"All of these actions, while difficult, will give TripAdvisor greater financial flexibility and enable us to better manage the business through this time of incredible uncertainty and instability," CEO Steve Kaufner said in an open letter.

TripAdvisor's stock is down 40% for the year.

Colorado received more than $10 million from the US Department of Health and Human Services to provide additional funding for epidemiological work and lab testing in response to the Covid-19 pandemic, according to a press release from the Colorado State Joint Information Center.

The funding is part of various federal aid programs which provide assistance to states dealing with the impact of the coronavirus pandemic.

“We have our work ahead of us to slow the spread of Covid-19, and this additional funding will allow us to bolster our testing, case investigation, contact tracing, and outbreak investigation work at a critical time," Rachel Herlihy, the state’s epidemiologist said in a statement.

The CDC will provide further guidance on the specific spending parameters later this week, but generally the money is for a two-year period and is intended to go towards programs that "enhance case investigation, contact tracing, and outbreak response, especially in high-risk settings and among at-risk populations," for example, the statement said. 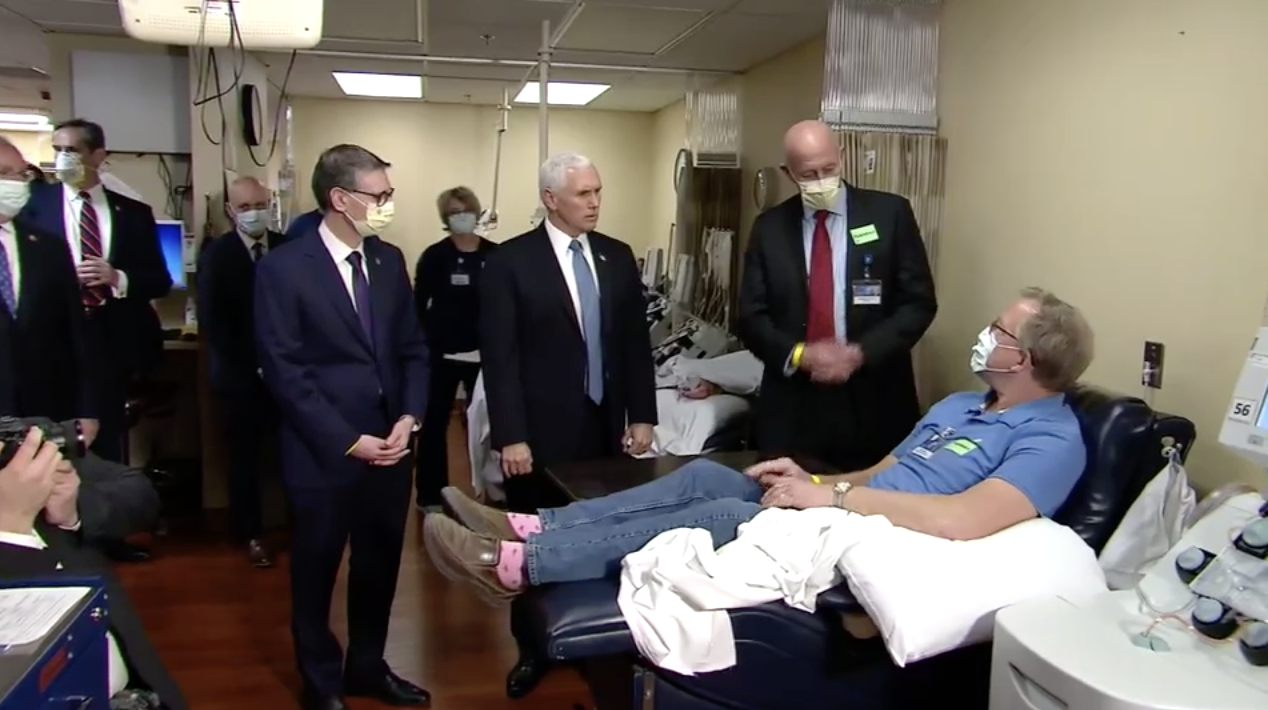 Vice President Mike Pence is touring the Mayo Clinic in Rochester, Minnesota, today, speaking with health care workers and plasma donors. He’s currently touring a coronavirus testing lab and getting an explanation of its capabilities.

Strikingly, Pence is the only person visible in the video not wearing a face mask. Dr. Stephen Hahn with the Food and Drug Administration is touring the facility along with the Vice President, and he, unlike Pence, is wearing a mask.

Mayo Clinic tweeted that Pence had been notified of its "masking policy" before today's tour, but then later deleted the tweet.

There are at least 1,002,498 cases of coronavirus in the US, according to Johns Hopkins University's tally of cases.

The number of confirmed US coronavirus cases topped 500,000 on April 10, according to Johns Hopkins’ tally.

Trump is expected to sign the order after some companies, like Tyson, were considering only keeping 20% of their facilities open. The vast majority of processing plans could have shut down, which would have reduced processing capacity in the country by as much as 80%, an official familiar says.

By signing the order, Trump will declare these plants as a part of critical infrastructure in the US.

The administration is also working with the Labor Department on issuing guidance about which employees should remain home. This is to protect facilities that are required to stay open from liability issues.

Trump previewed the order earlier today during an Oval Office spray with Florida Gov. Ron DeSantis, saying that he expects to sign an executive order later in the day related to the food supply chain.

“It was a unique circumstance because of liability,” he added.

Students at the University of California and the California State University System are suing for the balance of their campus fees, according to court papers filed in Los Angeles and Oakland yesterday.

The suit filed in Los Angeles against the California State University System said:

“CSU's decision to transition to online classes and to instruct students to leave campus were responsible decisions to make, but it is unfair and unlawful for CSU to retain fees and costs and to pass the losses on to the students and/or their families. Other higher education institutions across the United States that also have switched to e-learning and have requested that students leave campus have recognized the upheaval and financial harm to students and/or their families from these decisions and have provided appropriate refunds.”

Similarly, the Oakland filing against the University of California says it “has improperly retained monies paid by Plaintiff and the other Class members for these fees for services that are no longer available,” according to the filing.

Campus fees include health facilities, health services and student activities. Most students were not eligible for stimulus funds, said the suits.

Campuses have been closed to students since March and moved to distance learning platforms for over 700-thousand students.

School is in session through at least May for both university systems.

Ivey said she will instead issue a safer-at-home order that will go into effect at 6 p.m. ET Thursday.

Under the new order, all employers, retail stores and beaches will be allowed to open subject to good sanitation and social distancing rules, the governor said.

Ivey said the state is not out of the woods.

She encouraged all Alabamians to stay home and follow good sanitation practices.

When the Supreme Court hears arguments next month by phone for the first time in the court's history, the justices will change their normal protocol and try to avoid their familiar interruptions.

The justices will ask their questions in order of seniority, with Chief Justice John Roberts going first, the court announced today.

Under normal circumstances, the court is considered a "hot bench," with justices frequently interrupting each other and the lawyers before them. Roberts has had to step in as a kind of traffic cop at certain times.

Under the new system that will be in place for arguments beginning on Monday, a justice will get the chance to exhaust his or her line of questioning before the next justice begins.

If there is time, according to a release from Kathy Arberg, the Court's public information officer, any remaining questions can be asked after the first round is over.

Arberg said the changes were made in "keeping with public health guidance in response to Covid-19."

In all, the court will hear 10 cases over the next two weeks. The most noteworthy cases fall on May 12 concerning President Trump's bid to shield his financial records from release.

The sessions will mark the first time in history that members of the public will be able to listen in to arguments real time.

An additional 2,887 positive cases were reported in New Jersey, pushing the statewide total to 113,856.