There are at least 50,355 cases of coronavirus in Illinois, said Dr. Ngozi Ezike, the state's public health director. At least 2,215 deaths people have died from the virus.

As of midnight, 5,036 people were hospitalized in Illinois for Covid-19, Ezike said at a news conference.

At least 1,290 were in intensive care and 777 patients were on ventilators, she said.

National Football League Commissioner Roger Goodell has announced staff furloughs, salary reductions and cuts in the NFL’s pension plan in a memo sent to the league office staff in New York and employees at NFL Films and NFL Network.

CNN obtained the memo from a source with knowledge of its distribution. The source also disclosed that Goodell had voluntarily reduced his own salary to $0 effective last month.

In the memo, Goodell discloses that the league is still preparing for a full 2020 season but acknowledges the “difficult decisions” that had to be made due to the economic consequences of the coronavirus pandemic.

"[I]t is clear that the economic effects will be deeper and longer lasting than anyone anticipated and that their duration remains uncertain. The downturn has affected all of us, as well as our fans, our business partners, and our clubs," Goodell said in the memo.

According to the memo, pay reductions are aimed at the management level who make more than $100,000.

Goodell said that those employees “who are unable to substantially perform their duties from home and/or whose current workload has been significantly reduced” will be furloughed.

He added that he hoped that the league will be able to reinstate those furloughed in due time. The commissioner also announced a permanent change to the contribution percentage in the league’s pension plan.

Arkansas Gov. Asa Hutchinson said his state will open restaurants for limited dine-in service on May 11.

Speaking at an afternoon news conference, Hutchinson said restaurant will only be able to operate at a third of their normal capacity. Additionally, restaurants will be limited to groups no larger than 10 people.

Hutchinson said if the state continues on a downward trend, they will move into a second phase by increasing to 67% of capacity at a later date.

“If you’re planning a very large summer gathering, a 4th of July parade, a large music festival, a huge cultural event with hundreds and hundreds of people, you are not going to be able to have that event in the state of Rhode Island this summer with those people in person," Raimondo said.

How bad is the coronavirus economy? The worst ever, says Fed Chairman Jerome Powell.

"We are going to see economic data for the second quarter that is worse than any data we have seen for the economy," Powell said. "There are direct consequences of the disease and measures we are taking to protect ourselves from it."

The recovery will be long and painful, but the economy could begin to bounce back significantly in the third quarter as businesses reopen, he added. While we won't go back to pre-coronavirus levels for quite some time, the third quarter could provide some economic relief.

"We will enter the new phase — and we are just beginning to maybe do that — where we will begin formal measures that require social distancing will be rolled back, gradually, and at different paces in different parts of the country. And in time, during this period, the economy will begin to recover," Powell said.

Powell also noted that unemployment shot higher for minorities in the United States —much faster than it has for white Americans.

Just a few months ago, the US labor market was the best-ever for minorities, Powell noted. Now, minorities are among the first to lose their jobs as stay-at-home orders have shuttered restaurants, movie theaters, retailers and many other businesses.

"It is heartbreaking, frankly, to see that all threatened now," Powell said. "All the more need for our urgent response and also that of Congress, which has been urgent and large, and to do what we can to avoid longer run damage to the economy."

Powell noted that people "who are least able to bear it have been the first to lose their jobs, and they have little cushion to protect themselves.

"That is a very big concern," Powell said.

With people out of work, food banks are seeing a 73% spike in demand, and the closure of restaurants and cancellation of events has led to a 50% decrease in demand for farm goods, according to Gov. Gavin Newsom.

This new program will provide food boxes filled with high quality produce, poultry and other goods to feed a family of four for a few days. There are 128 farmers and ranchers on board already, and they will supply food to 41 food banks. Another 200 participants have already been identified as the program expands.

The partnership between federal and state government also includes private funds from philanthropists, Newsom said. About $3.6 million has already been raised to start the program, with a goal of raising $15 million. Farmers will receive a tax credit of 15%, and provide for wages to farmworkers.

Additionally, Newsom announced a federal waiver that will allow food stamp recipients to use their debit cards for online food purchases. The state has created an agreement with Amazon and Walmart, and plans to bring other retailers on board.

There are now 20,849 confirmed cases of Covid-19 in Maryland, Gov. Larry Hogan said in a news conference today.

So far, 985 residents have died and 4,402 have been hospitalized, Hogan said.

Currently, 1,610 people are hospitalized and 586 are in intensive care, he said. 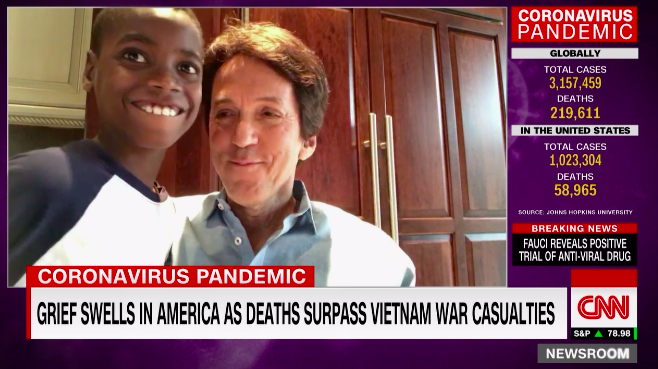 Albom, a long-time sportswriter and author, said the story is about an 8-year-old boy living in Detroit who is immune to getting sick during a health crisis. Albom said the main character "becomes the key to solving the whole crisis and he is based on a real 8-year-old boy" from an orphanage that Albom runs in Haiti.

In a surprise moment during the interview, Albom's eight-year-old inspiration — who is currently staying with him after traveling to the US for treatment — popped on screen with the writer.

"I bring him up for therapy and he got stuck here in the travel ban, so he's been here ever since and he is the absolute light of our lives," Albom said.

New York City has reported 12,287 confirmed and 5,302 probable coronavirus deaths, according to the city website.

The New York City Health Department defines probable deaths as people who did not have a positive Covid-19 laboratory test, but their death certificate lists as the cause of death “Covid-19” or an equivalent.

There have been 159,865 coronavirus cases in the city and approximately 41,316 people have been hospitalized, according to the city.

The data is from the New York City Health Department and was updated on April 29 at 1 p.m., according to the website.