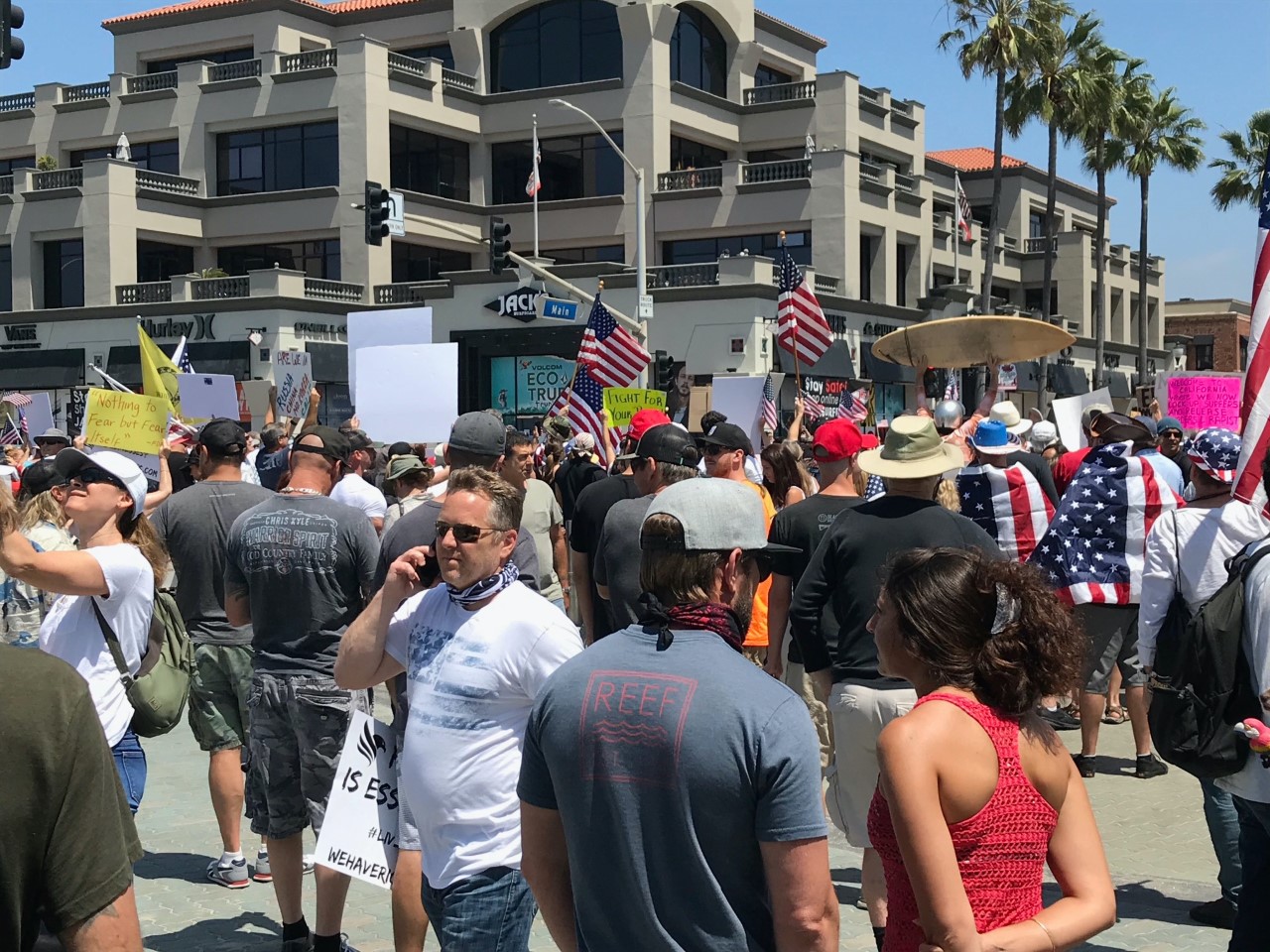 Hundreds of demonstrators gathered Friday in Huntington Beach, California, a day after the governor announced an order to close all beaches in Orange County.

Despite recommendations from public health officials that people socially distance, large crowds were packed shoulder-to-shoulder near the popular Huntington Beach Pier. Most were not wearing masks.

While the crowd has remained peaceful, dozens of law enforcement officers are patrolling the event, including SWAT teams in tactical gear and police helicopters overhead. Out of sight from protesters, riot patrol officers on horseback staged under the Huntington Beach Pier, with one officer telling CNN they were here “just in case.”

While the beach is technically closed, officers did not appear to be enforcing the governor’s new closure order.

One protester walked past a line of officers blocking access to the beach and asked police officers if he was breaking the law. The officer responded, “Yes, you are technically entering an unauthorized area,” but did not stop the protester as he proceeded past the line of officers and to the ocean.

The US Food and Drug Administration issued an emergency-use authorization on Friday for remdesivir in hospitalized patients with severe Covid-19.

The FDA said it issued the authorization based in part on the results from a trial sponsored by the National Institutes of Health, the results of which were announced by Dr. Anthony Fauci on Wednesday. The infused drug reduced the time of illness in some severely affected patients.

What this means: An emergency-use authorization is a lower regulatory bar than full FDA approval, but it’s a sign that the FDA believes the benefits of a drug outweigh its risks in certain patients.

The FDA limited its authorization of the drug to adults and children with suspected or laboratory-confirmed Covid-19 and severe disease. The drug is administered in a hospital setting via IV by a healthcare provider

The CEO of Gilead Sciences, the maker of remdesivir, said in an open letter on Wednesday that the company’s existing supply of the drug could cover at least 140,000 treatment courses for patients with Covid-19.

Protests against California’s continued stay-at-home order are happening simultaneously at the state's capitol in Sacramento and at closed beaches in Orange County.

“This disease doesn’t know if you’re a protester, a Democrat, a Republican,” Newsom said. “Protect yourself, protect your family, your kids, your parents, your grandparents, your neighbors.”

“I appreciate expression points of view,” Newsom acknowledged, “but we’re interested in evidence, and the evidence shows some good things, but some yellow flags of caution.”

He added: “We can screw all of that up, we can set all that back by making bad decisions."

Michigan Gov. Gretchen Whitmer signed a new executive order today allowing some types of work to resume on Thursday. It includes construction, real estate and work that is traditionally and primarily performed outdoors,

Manufacturing for the express purpose of producing items that will help businesses modify workspaces to keep employees safe, like partitions or cubicle, will also resume, Whitmer said.

According to the governor, her order requires those businesses to adopt measures to protect their workers against the spread of Covid-19. Under the order, construction sites have to adopt a set of best practices, including things like daily health screenings and identifying high-risk areas.

Major League Soccer announced today that players may begin to use outdoor team training facilities for individual workouts on May 6.

In a statement released by the league, teams and players are to comply by “detailed health and safety protocols that were created in consultation with medical and infectious disease experts.” All workouts are voluntary.

Each club must also relay these new protocols to players and team staff.

The league-wide moratorium on small group and full team training remains in place through May 15.

California Gov. Gavin Newsom said he is “days, not weeks” away from lifting some restrictions of the state’s stay-at-home order.

“I just want folks to know that we are getting very close to making really meaningful augmentations to that stay-at-home order,” the governor said today.

Some areas that will be impacted in this first wave of reopening include retail and hospitality, including restaurants. All will have serious modifications, Newsom said, adding that experts are looking at each industry and developing guidelines to begin to return to normal.

Newsom also made clear he understands the difference in needs between rural and urban areas. “We hear you,” he said.

There were no criminal violations at the home, according to police. Eleven of the bodies were transferred to a temporary morgue and seven bodies remained at the funeral home, Callahan said. CNN has reached out to the funeral home for comment.

Earlier this week, New York officials discovered four trucks in Brooklyn containing as many as 60 bodies outside the Andrew Cleckley Funeral Home after someone reported fluids dripping from the trucks.

Florida Gov. Ron DeSantis announced his state received a critical care decontamination system from the federal government that is capable of cleaning up to 80,000 masks per day.

The system is located at the Miami Hard Rock Stadium and uses vapor-phase hydrogen peroxide to clean masks up to 20 times. N95 masks will be collected from hospitals, first responders and testing sites for cleaning.

Cosmetology schools are not included in the reopening.

Strict guidelines will need to be followed after reopening, he said. The guidelines include: