New York Gov. Andrew Cuomo said the state will reopen on a regional basis, and he outlined four metrics that will help decide if a region is ready to reopen:

Cuomo said New York regions will follow US Centers for Disease Control and Prevention guidelines for when to begin reopening. They are:

There were 226 people who died of coronavirus across New York state on Sunday, Gov. Andrew Cuomo said in a press briefing.

"This is the number that haunts me every day, and this number is not declining anywhere nearly as fast as we would like to see it decline," he said Monday.

The number of deaths were down from 280 people who died across the state on Saturday. 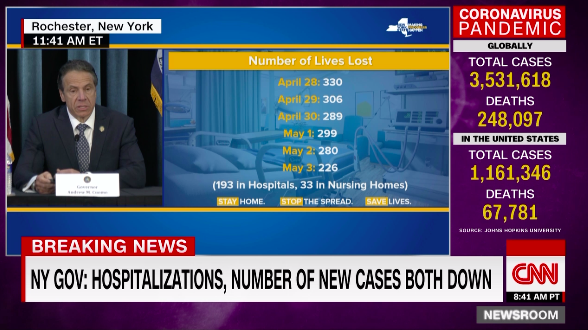 New York Gov. Andrew Cuomo said the total number of hospitalizations across the state continues to decline — but it's going down at a slower rate than it increased.

"Now we're on the other side of the mountain," Cuomo said. "Unfortunately the decline from the mountain is not as steep as the incline."

He noted that the state had hoped for a steep incline, a brief plateau and a "fast decline." That decline isn't happening as quickly as he had hoped, Cuomo said.

Cuomo said the big questions now are how quickly does the rate keep falling and how low does the decline go.

There is no White House coronavirus task force meeting on the schedule as of this morning, according to a source close to the task force.

Miami Beach reopened parks and other public spaces last week — but not everyone followed the rules.

The Miami Beach Police Department announced it would close South Pointe Park again until further notice due to non-compliance.

Here is a breakdown of the city-wide warnings issued by date:

The majority of those warnings and instances of non-compliance occurred at South Pointe Park, according MBPD.

As some city workers in Detroit begin to go back to work under some restrictions, Mayor Mike Duggan said the city is ready for outdoor work under protocols, but it might take some time for office workers to return.

“We're not bringing people back sitting next to each other in cubicles and desks. This state isn't ready for that. But we definitely believe we can bring people under these protocols for outdoor work back safely.”

He detailed the protocols under which outdoor workers can return to work. They are required to wear masks and socially distance on the job. They must also test negative for Covid-19 before returning to work.

“We are bringing people back under the strictest medical protocols in the country,” he said. “It's the same protocols we put in our police department, our fire department and our bus system, and we had a dramatic positive effect in bringing down the infections.”

Meanwhile, protesters in Michigan are criticizing Gov. Gretchen Whitmer, demanding she reopen the state. Mayor Duggan said the protests haven’t impacted Detroit and his measures are consistent with Whitmer’s orders.

The Marshal of the Supreme Court began with the traditional "Oyez! Oyez! Oyez!"

The US Supreme Court justices began conducting their business today via teleconference this morning. In general, as the justices started their questions, they sounded a bit stilted, but then they warmed up and it sounded more natural. Justice Clarence Thomas, who almost never asks questions, took his turn launching his inquiries after Chief Justice John Roberts. The justices proceeded in order of seniority.

When it was Justice Sonia Sotomayor’s turn, there was silence on the line for a moment. But then she piped in — “sorry Chief,” she said and began her questions.

Roberts is keeping time. He cut off a government lawyer more than once so that the next justice could speak.

Kagan seemed the most accustomed to the teleconference. She asked several questions and had more give and take with the lawyer

New York Mayor Bill de Blasio said today that three key indicators of the spread of Covid-19 that New York City is monitoring are down:

The White House's "Operation Warp Speed," which aims to develop a coronavirus vaccine quickly, expects to have six to eight of the vaccines being tested to make it to subsequent rounds of trials.

Officials’ goal is to have three to four vaccines then make it through final testing and to be made available — but that depends on how the testing and clinical trials proceed and how successful they are.

Some background: An administration official told CNN scientists have identified 14 vaccines to focus on for development as part of the operation.

"Operation Warp Speed" was a name chosen by the scientists working on all the challenges that surround vaccine deployment. They are already working on solutions to quickly ramp up production, organize distribution and determine who gets the first doses of the vaccine.

Trump said Sunday night at a Fox News town hall, “We are very confident we are going to have a vaccine by the end of the year.” And Dr. Anthony Fauci, the nation's top infectious disease expert, told NBC on Thursday it’s possible there could be a vaccine by early next year.