“As Vermont’s winter transforms into a bright and green spring, many of us, myself included, are itching to get outside and go a bit further afield,” Moore said.

Residents are no longer being asked to stay within 10 miles of their homes, she said. However, Gov. Phil Scott said anyone who crosses the border is still required to quarantine for 14 days.

Wendy's expects the beef shortage that's affecting about 1,000 of its US restaurants to continue for the foreseeable future.

CEO Todd Penegor said on an earnings call today that Wendy's will probably experience a "couple of weeks of challenging tightness that we'll have to work through" before getting back to normal.

Yesterday, Wendy's said some of its menu items might be "temporarily limited at some restaurants" because of the national meat shortage. Though its delivery schedule remains unchanged, supply has been tight because beef suppliers across North America face production challenges during the pandemic.

Analysts at financial firm Stephens scoured the online menus of Wendy's 5,500 US restaurants and found that one in five are not selling hamburgers or other beef items. Instead they're highlighting chicken sandwiches.

Penegor acknowledged that certain items will be removed from menus from "time to time" during the shortage.

"We do believe it is temporary, and we're close with our big supply partners," he added. "We have several of them on the fresh beef front, and we do believe we'll work through this in short order."

He also noted that while some restaurants aren't displaying beef on their online menus, it doesn't necessarily mean the restaurant is completely out of beef. Restaurants have the ability to customize their menus, and some have chosen not to display beef items to prevent dissatisfaction since supplies are low.

"It doesn't mean you're out of beef at the restaurant level, but you wouldn't want to really disappoint a consumer if they looked in mobile order and said you had beef, and then they drove to the restaurant and you are out," he said.

It's "hard to quantify" the material impact the shortage might have on Wendy's profits, Penegor added, because customers could be buying other menu items instead.

Still, Wendy's stock soared more than 6% in trading today after revealing that US same-store sales have been rebounding every week since hitting a low the first week of April. The company also said that its newly launched breakfast menu is exceeding expectations.

Florida Gov. Ron DeSantis signaled Wednesday that the three south Florida counties who were exempt from phase one of his reopening plan could reopen soon.

“We'll hopefully be able to go forward soon in southern Florida,” DeSantis said during a press conference in Miami Gardens.

DeSantis said he has been looking at the trends and even though the Miami-Dade, Broward and Palm Beach counties are not quite ready yet, he is optimistic that the region will be ready soon.

Miami-Dade Mayor Carlos Gimenez echoed the governor’s tone, saying the county wants to open up as fast as possible while being as safe as possible.

Jet Blue will give a pair of roundtrip flights to 100,000 medical professionals around the country, New York Gov. Andrew Cuomo said Wednesday.

The airline is beginning with 10,000 workers from New York, he said.

Dr. Caitlin Rivers, senior scholar at the Johns Hopkins Center for Health Security said to her knowledge, no state has met all the criteria laid out by the White House Task Force for reopening.

“To my knowledge, there are no states that meet all four of those criteria,” Rivers said.

President and CEO of Resolve to Save Lives, Dr. Tom Frieden said “open versus closed is not a strict on-off switch.”

“There are things that might be first to open: out of doors is way less risky than inside, low-risk businesses, take out from restaurants, outdoor recreation, even daycare if done very carefully and safely maybe lower risk,” Frieden added.

Many of the patients....

"Much of this comes down to what you do to protect yourself … it comes down to personal behavior," Cuomo said, reiterating the importance of wearing a face covering, using hand sanitizer and social distancing – especially from vulnerable people and populations.

The initial results are drawn from surveys of approximately 1,000 patients from around 100 hospitals across the state over three days, he said. 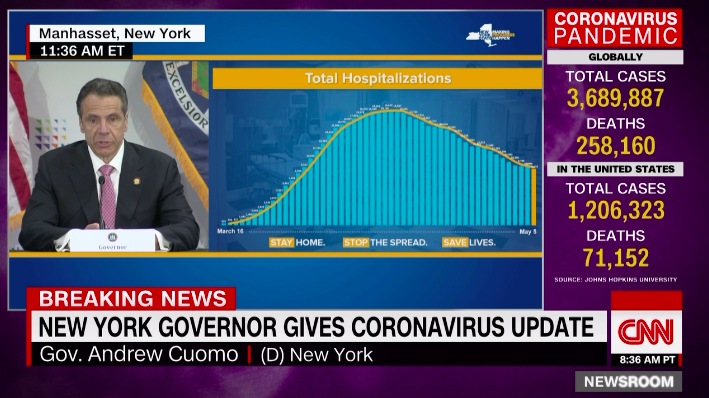 New York Gov. Andrew Cuomo said today that the state's "total hospitalization rate is down again" today but added he would like to see a "steeper, faster decline."

"We would have liked to see a steeper, faster decline, but this is where we are, and it's a painfully slow decline. But it's better than the numbers going the other way," Cuomo said.

At least 207 of them died in hospitals and 25 died in nursing homes, Cuomo said.

That's up slightly from the 230 people who died on Monday and the 226 who died on Sunday.

"When people talk about how good things are going, and the decline and the progress, that's all true. It's also true that 232 people were lost yesterday,": Cuomo said.

He cautioned that the death totals may be "worse" when the final numbers are tallied. At home deaths may not be documented and the virus may have caused some deaths earlier than reported, Cuomo said.

After all the back and forth on the White House coronavirus task force’s future, its members are unsure what's happening with the panel, according to a source close to the task force.

They have not been told what will happen next, this person said.

Later today there is a closed-door task force meeting on the schedule, according to the Vice President's schedule.

Some context: This all comes after President Trump appeared to reverse course this morning on the decision to wind down the task force.

He tweeted Wednesday that the task force will “continue on indefinitely” and shift its focus to “SAFETY & OPENING UP OUR COUNTRY AGAIN.”