President Trump says he'll be tested daily for coronavirus after one of his valets tested positive for Covid-19.

Speaking in the Oval Office after news of the valet's condition broke, Trump said the episode underscored the fallibility of using testing exclusively to determine safety.

"What happens in between when you got tested and just a couple of days later?" he asked, saying there were "a number of days missed" between when the valet was last tested and when he discovered he had coronavirus.

Trump said he'd had "very little personal contact" with the man, a US military member, who tested positive. He described the situation as "a little bit strange."

Trump repeated that Americans were "warriors" in their efforts to overcome the pandemic.

A total of 709 deaths from Covid-19 are from nursing homes across Louisiana, according to the state's Department of Health.

Confirmed cases have been reported in 179 of the 279 nursing homes in the state.

According to the state, 90 of the 157 adult residential facilities are reporting 438 cases and 75 total deaths.

Louisiana has 30,652 confirmed coronavirus cases and 2,208 deaths from the disease, according to a tally from Johns Hopkins University. 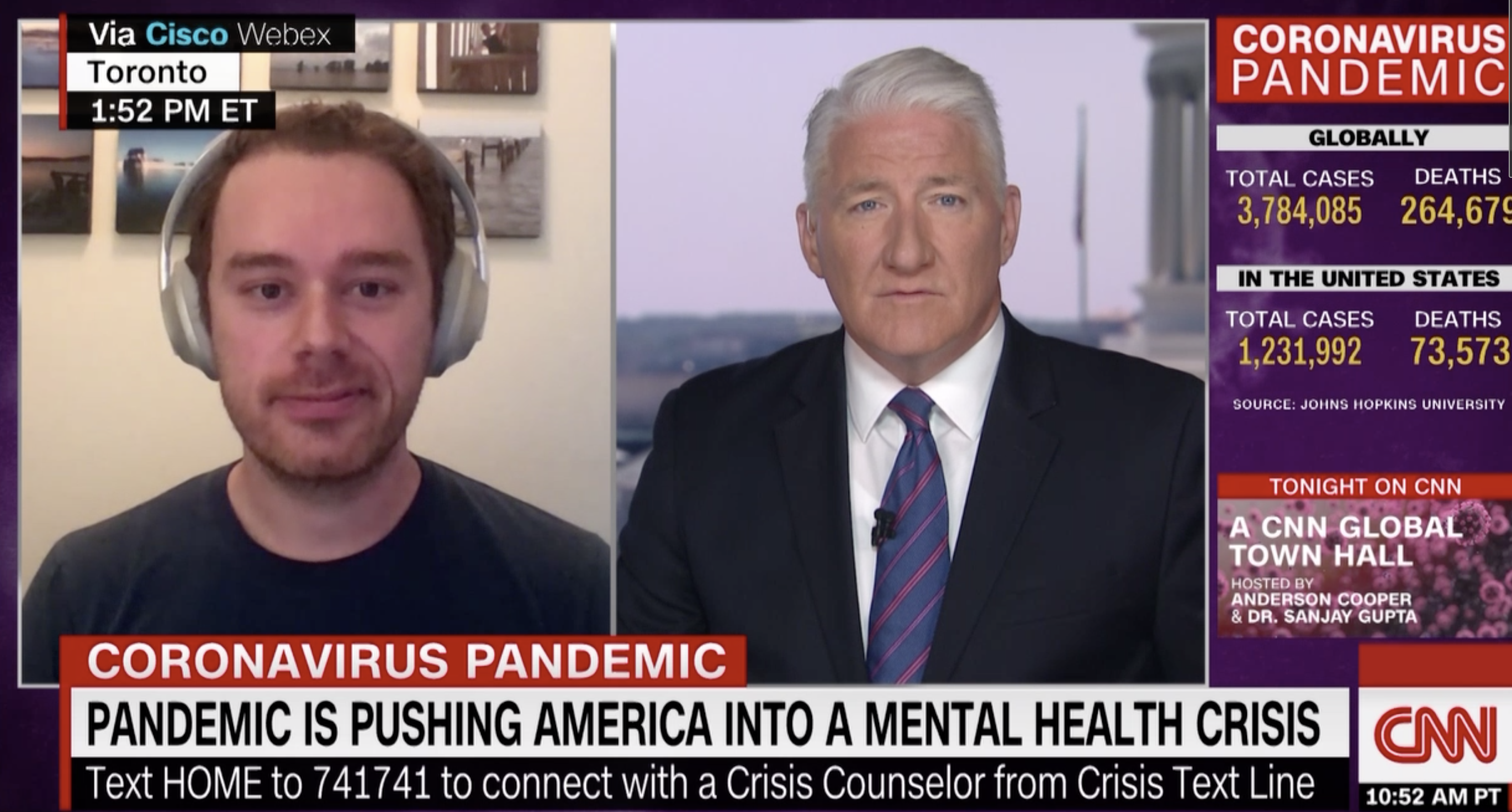 The coronavirus pandemic is having an adverse impact on people’s mental health, according to Bob Filbin, co-founder and chief data scientist of Crisis Text Line. He said his company has seen a 40% higher volume in people reaching out since mid-March.

Some of the top trending phrases the Crisis Text Line is getting from texters include:

“We’re starting to see issues around being laid off, losing your job enter this top 10, whereas quarantine and fear of getting the virus remain high,” Filbin told CNN’s John King.

He added, that “over 80% of our texters say they're experiencing some kind of fear or anxiety related to Covid.”

He urged people to reach out if they’re experiencing feelings or symptoms that are disrupting their life. You can text HOME to 741741 to connect with a counselor from Crisis Text Line.

Thousands of children are still eagerly anticipating a decision as to whether summer camps in Maine will be allowed to open for a part of the summer.

Ron Hall, executive director of Maine Summer Camps umbrella group, said he anticipates Gov. Janet Mills will allow camps to reopen in July. Hall said he is waiting on state guidelines for what measures would need to be taken to open.

Hall has asked for camps to be treated as “closed communities” like nursing homes, which would allow them to operate outside other social distancing guidelines. Rules that prohibited gatherings of 15 or more, he said, would basically make it impossible for many camps to open.

"That would be very hard," Hall told CNN.

Some more context: At a news conference Thursday, Mills didn't definitively answer the fate of summer camps when asked by a reporter. She said her office is working to see if there's a way that camps can safely open "in some capacity, in some degree."

"We're working on that, can't make any promises yet, but we're hopeful," Mills said.

Dr. Corita Grudzen, vice chair for Research and Emergency Medicine at NYU Langone Health, is running a new drug trial that explores the benefits of using blood plasma from patients who have recovered from coronavirus on new patients who are experiencing moderate symptoms.

The trial borrows antibodies from patients who are now recovered and are 28 days asymptomatic, Grudzen told CNN’s John King.

“We use their antibodies through plasma and we give them to patients who are ill in the hospital, on oxygen, not feeling well and compare that to saline,” she said.

Using plasma isn’t something new, Grudzen added. “The first Nobel prize in medicine went to someone who invented this whole process to cure diphtheria,” she said.

Grudzen said administering the treatment early in the course of the illness is theoretically the best chance for it to have an impact.

So far, her trial has enrolled a little more than 100 patients, but she’s hoping to reach 300 as soon as possible in order to get answers from her study, including whether the treatment is beneficial, harmful or has no effect.

“It’s a race against time, but with all these infectious diseases, part of the problem is …  the epidemic wanes, we don’t have the science, and God forbid that there’s another outbreak, we don’t have any answers. So, we’re trying to enroll patients as fast as we can,” she said.

A new study finds no evidence the drug hydroxychloroquine helps very ill Covid-19 patients survive better or escape the need for a ventilator to help them breathe.

"The patients who got the drug did not fare any better or any worse than patients who didn't get the drug," Neil Schluger, professor of epidemiology and environmental health sciences and professor of medicine at the College of Physicians and Surgeons at the Columbia University Medical Center, told CNN on Thursday.

There’s little to support the widespread use of the drug, Schluger and colleagues wrote in their report, published in the New England Journal of Medicine Thursday.

"What we think perhaps the most important take-home message is that this drug is being administered to many, many, many people around the United States and around the world without any robust evidence that it works," Schluger said. "Our data could not demonstrate any association between the drug and an outcome — so our strong feeling is that this drug should not be administered in a routine basis to hospitalized patients."

What is this about: President Trump had urged use of the drug, originally developed to treat malaria and used to treat some autoimmune diseases such as lupus.

Among the patients, 811 or 58.9% of them were treated with hydroxychloroquine. The remaining patients were not. By the end of the study, 180 patients were intubated and 166 died without intubation.

Once the data in the study was adjusted to compare the groups, the study found no difference in the risk of intubation or death among patients who received hydroxychloroquine compared to those who did not.

"From that analysis, there appeared to be no association at all," Schluger added. "In a sense, we can't see any association between getting the drug and anything happening to anyone."

The National Institutes of Health and the Food and Drug Administration have cautioned against using the drug outside of a clinical trial.

Miami Beach just extended its “safer-at-home” order through May 14, according to a copy of the signed order released by the city’s press office.

All employees and customers of essential retail and commercial businesses are also required to wear a face covering, such as a mask, scarf, bandana or handkerchief.

If you're just joining our live coverage of the coronavirus pandemic in the US, here are the latest headlines:

Ohio Gov. Mike DeWine announced today that personal services like hair salons, barber shops, day spas, or nail salons will be allowed to open on May 15.

Debbie Penzone, who headed up the working group that put together best practices for reopening personal services, said some changes in practices will include professionals wearing masks and clients waiting in their cars until their appointment.

Additionally, the governor announced Ohio’s outdoor dining will reopen on May 15 and dine-in service will resume on May 21.

According to Treva Weaver, a restaurant COO who led the state’s restaurant working group, the establishments will need to create floor plans to comply with social distancing guidelines and most all employees will be wearing masks in the reopening.