JetBlue President and COO Joanna Geraghty said that safety measures such as temperature checks need to be uniformly mandated by the government.

Geraghty said it’s confusing for the public, when they start traveling again, if one airline implements specific safety measures while another does not.

“There needs to be a global industry solution for this. Different standards for different airlines is going to be challenging for the traveling public. … Our recommendation is for the government to step in and handle that service,” she told CNN’s Erica Hill.

JetBlue was the first major airline to require facial coverings, and Geraghty said the airline is offering empty seats next to passengers and undergoing deep cleanings.

Geraghty said the airline industry has been “rocked to its core” and the company is working to conserve cash.

“There's some very small glimmers of light, but we're not overly optimistic about that,” she said.

The US Bureau of Labor Statistics will release its official jobs report for April 2020 at 8:30 a.m. ET today, and it is expected to show devastation in the US labor force, with record-high job losses and unemployment on par with the Great Depression.

Record jobs drop expected: Economists polled by Refinitiv expect the US economy to shed 21.85 million jobs in April, by far the largest number on record. The US government's monthly jobs data dates back to 1939.

Combined with job losses in March, April's layoffs would wipe out all jobs gained over the past decade.

Some historical context: Economists polled by Refinitiv also expect the unemployment rate to soar to 16%, the highest rate since the BLS started tracking monthly unemployment numbers in 1948.

That's a level of joblessness not seen since the Great Depression in the 1930s, for which the BLS estimates annual data. Government economists estimate the unemployment rate peaked at 24.9% in 1933.

How we got here: The Covid-19 outbreak has torn through America over the past two months. People began working from home where possible in the second half of March, as businesses closed and schools suspended in-person teaching. As the lockdown dragged on, companies laid off and furloughed their staff. 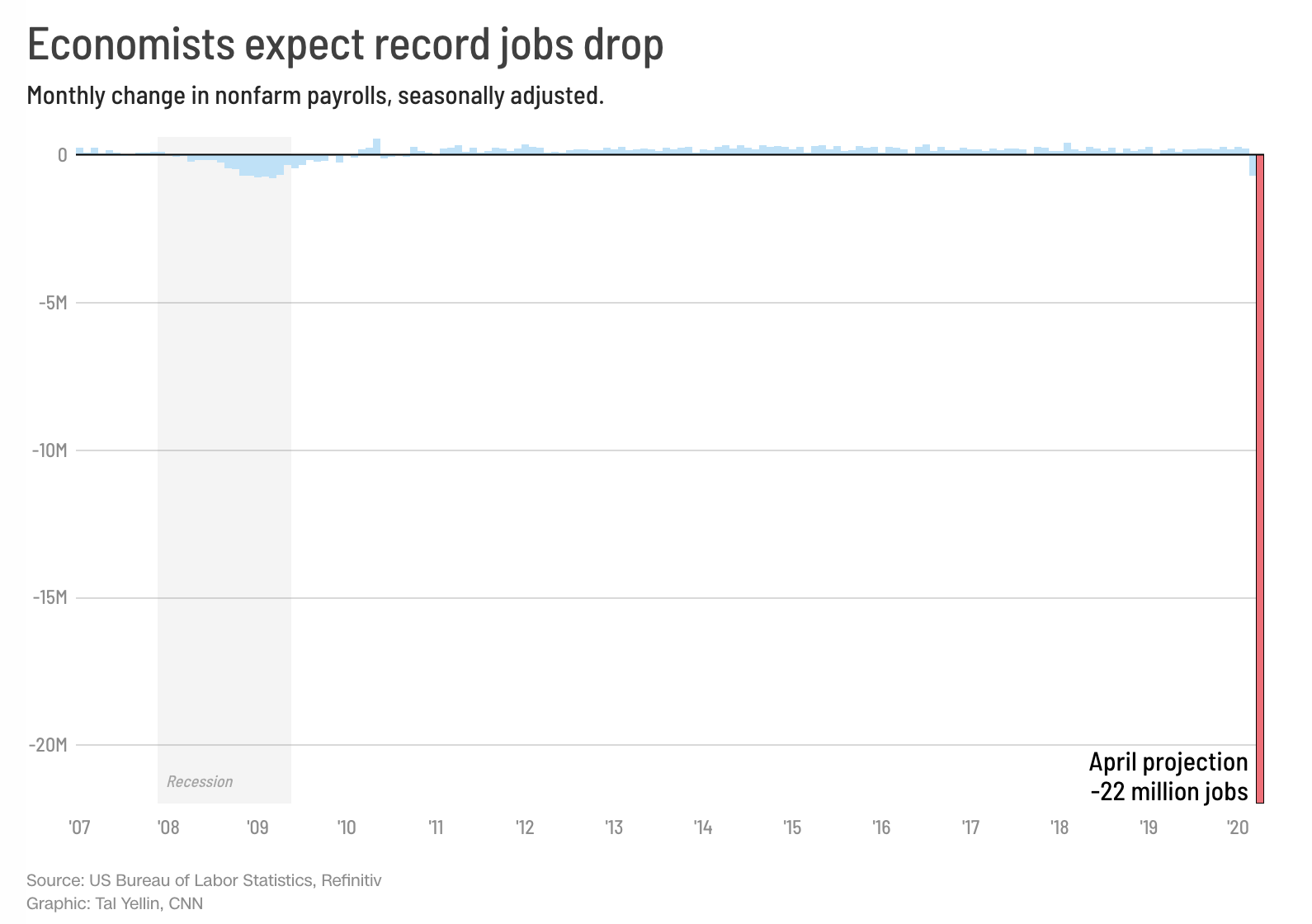 Nurses rallied in front of the White House on Thursday morning to protest the lack of personal protective equipment available to them in the battle against the novel coronavirus.

The demonstrators gathered in Lafayette Square in front of the White House and placed 88 pairs of empty shoes on the ground. Those shoes represented the life of each nurse they say has been lost due inadequate personal protective equipment while fighting the coronavirus.

The demonstrators then read the names of the 88 fallen nurses.

"You talk about how essential, how needed, how grateful you are, and yet you throw us to the wolves. You throw us out onto a battlefield without armor and the more we complain we don't see anything being done," said Jean Ross, president of National Nurses United, in an interview with CNN.

The union's website said the protest was meant to demand "that the administration do more to protect frontline health care workers around the country." The union represents 155,000 nurses around the country and has been vocal throughout the coronavirus pandemic.

Public health experts, including members of the White House Coronavirus Task Force, have argued accurate Covid-19 antibody tests can support efforts to get Americans back to work by determining who may have overcome the virus.

But the rollout of millions of antibody tests in the US has created frustration and division among state health departments due to a mix of questionable tests, shifting federal rules and a hodgepodge of different methods for tracking results.

While the Centers for Disease Control and Prevention has launched a strategy to use antibody tests for surveys that study the spread of the virus in different locations and populations, the federal government has not coordinated an effort to track the raw data of antibody tests performed in all states.

Instead, the Trump administration has instructed states to develop their own testing plans, and now states are split on what to do with antibody tests.

A member of the US Navy who serves as one of President Donald Trump's personal valets has tested positive for coronavirus, CNN learned Thursday, raising concerns about the President's possible exposure to the virus.

The valets are members of an elite military unit dedicated to the White House and often work very close to the President and first family. Trump was upset when he was informed Wednesday that the valet had tested positive, a source told CNN, and the President was subsequently tested again by the White House physician.

In a statement, the White House confirmed CNN's reporting that one of the President's staffers had tested positive.

"We were recently notified by the White House Medical Unit that a member of the United States Military, who works on the White House campus, has tested positive for Coronavirus," deputy White House press secretary Hogan Gidley said in a statement. "The President and the Vice President have since tested negative for the virus and they remain in great health."