Massachusetts conducted 6,700 new tests Tuesday, 870 of which were positive, according to the governor. Massachusetts has conducted over 401,000 tests for Covid-19 to date, Baker said.

At least 3,000 people are hospitalized, the governor said.

California officially allowed seven counties to move into the next stage of reopening businesses.

Amador, Butte, El Dorado, Lassen, Nevada, Placer, and Shasta counties are allowed to operate curbside retail, childcare for essential workers, car washes, and other services. Personal services like nail salons and gyms are still not permitted at this stage.

These counties have met the state criteria of readiness. The criteria includes:

Gov. Gavin Newsom on Tuesday warned that the list of counties could be modified if health officials see a spread. The governor's office has been in contact with 27 counties to discuss fast-tracking to the next stage. There are 58 counties in California.

“Without Modoc, Yuba and Sutter Counties leading the way, rural California wouldn't have gotten the governor's attention and Butte County wouldn't be in the position we are today with reopening,” Butte County Supervisor Bill Connelly said in a statement. "We appreciate their efforts and look forward to seeing our neighboring counties opening up soon."

Gov. Andrew Cuomo said he is "not ready to say" what should be done for schools to open in September.

This comes after a reporter asked the governor about the California State University system not likely to return to campus this fall.

The governor said he asked schools to plan for a new normal and he wants to see what happens between now and then.

Some more context: Earlier today, New York City Mayor Bill de Blasio said that his goal is a full reopening of schools in the city in September but added that there will be “different types of options if we don’t feel it’s safe to open schools fully.”

The chairman of a key congressional health subcommittee is demanding to see the formula used by the federal government to ration remdesivir, an experimental drug shown to speed the recovery of coronavirus patients.

Rep. Lloyd Doggett, a Texas Democrat who chairs the House Ways and Means health subcommittee, said on Tuesday that the government’s “distribution of remdesivir seems akin to winning the lottery — a random stroke of luck rather than a medically-informed decision.”

His comments came in a letter addressed to US Health and Human Services Secretary Alex Azar, whose agency is distributing the drug. HHS has said the United States has enough remdesivir for about 78,000 hospitalized patients, but officials have never said how they’re deciding who gets the drug – and how much.

In his letter, Doggett explicitly asked Azar to provide the “formula HHS used to determine which states would receive how many doses of remdesivir and the delivery schedule for these doses.”

The drug’s benefits are modest, but remdesivir is the first therapy shown in a rigorous trial to have some effect against Covid-19 – shortening a patient’s hospital stay by about four days. The US Food and Drug Administration authorized the drug for emergency use on May 1.

The federal government originally directed remdesivir to select hospitals in a small number of states, but it was unclear why some received the drug while others – even in the same hard-hit areas – got nothing. After criticism, HHS backtracked on that plan and decided to ship remdesivir to state health departments to manage.

But those shipments have raised even more questions. California’s initial allocation, for example, is just 30 cases of remdesivir, or 1,200 vials, according to a document published Tuesday by the state’s health department. That’s enough to treat 200 patients at most – and it’s the same amount given to hospitals in Rhode Island last week.

The maker of remdesivir, Gilead Sciences, has said it has 1.5 million vials of the drug on hand – enough for between 100,000 to 200,000 patients. As the company works to manufacture more, 607,000 vials have been donated to the US, according to HHS.

Gilead has said it plans to provide the drug internationally, but it’s unclear how countries plan to divvy it up. In his letter, Doggett requested the “formula used to determine how the U.S. was allocated approximately 40% of the available supply and which other countries received how many doses.”

Doggett also called on Azar to describe any agreements between the US government and Gilead, such as for future doses of remdesivir.

In an unprecedented move, US vaccine makers are considering whether to work together on coronavirus vaccine trials.

They’re considering two approaches: One is more typical and involves each company working independently on its own trial, according to two members of the Accelerating Covid-19 Therapeutic Interventions and Vaccines group, or ACTIV, which was organized last month by the National Institutes of Health. The second, the group members said, involves several vaccine developers working in one large trial — an unprecedented method for vaccine development in the United States.

The third phase of vaccine trials typically involve thousands of study subjects, some of whom are randomly assigned to get the vaccine, and others who are injected with a placebo, a substance that does nothing. The researchers then wait and see if there is a difference in Covid-19 infections rates between the vaccine group and the control group.

If the vaccine developers band together in one large phase 3 trial of all of their experimental vaccines, they could all use the same placebo group and wouldn’t have to recruit their own.

Members of ACTIV’s clinical trials working group — including representatives from the vaccine companies —are expected to discuss the options on a call Wednesday.

There are no final decisions as of yet on which approach ACTIV will take,” NIH spokesperson Renate Myles told CNN in an email.

Three US companies are already testing their vaccines on humans, according to the World Health Organization. They’re still in phase one or phase two trials, which typically involve giving the vaccine to dozens or hundreds of study subjects.

The New York State Attorney General is calling on the NYPD to “better address the department's apparent unequal enforcement of social distancing rules,” throughout the city.

Attorney General Letitia James is “looking into the matter” and has requested various enforcement data from the NYPD.

The AG’s announcement “follows recent reports and videos of aggressive enforcement tactics by the NYPD in black and Hispanic neighborhoods, which provides a stark contrast to reports of police response to social distancing rules in predominantly white neighborhoods,” the release said.

“In majority white communities, it is alleged that the NYPD reacted differently,” the release said.

“Rather than arresting individuals, the NYPD issued summonses and gave out free face masks to the thousands of social distance violators in public parks across the city.”

Some background: The AG's announcement comes after a controversial video surfaced last week showing an officer punching a black man while the officers were responding to complaints of a lack of social distancing and people not wearing masks in the area of the city. The officer captured on camera

The Department of Health is investigating 102 cases of what may be a rare Covid-related illness in children with symptoms similar to atypical Kawasaki disease or toxic shock-like syndrome, New York Gov. Andrew Cuomo said today.

"We have lost three children in New York because of this," he said.

Because it does not present as a normal Covid-19 case, these children may not have been initially diagnosed as coronavirus patients, he explained.

"Covid cases are normally respiratory. This is predominantly not respiratory. It's an inflammation of the blood vessels, which could affect the heart. So, it's more of a cardiac case than a respiratory case, which is a new manifestation of the Covid virus," he said.

The wide range of symptoms makes it even harder for parents to know what they're dealing with, he acknowledged.

"If your child has been exposed to someone who had Covid, even if it was several weeks ago, that is a special alert in this situation," Cuomo said.

Hospitals have been instructed to prioritize testing for children who come in with these symptoms.

New York Gov. Andrew Cuomo said that antibodies testing in the state has showed that frontline workers, including police officers and health care workers, have a lower infection rate than the general population — which he called "good news."

Cuomo said that testing showed that in New York City about 19.9% of the general population tested positive for antibodies.

During the same test, about 12% of downstate health care workers, about 10% of NYPD employees, and about 17% of FDNY employees tested positive.

Why this is important: A positive test for Covid-19 antibodies may indicated the person was infected with coronavirus. A lower infection rate amongst frontline workers shows that the precautionary measures being taken by these essential workers are working, the governor said.

"As the number of Covid cases has come down, we can restart elective surgeries," he said.

In addition, ambulatory services will also resume in the state. 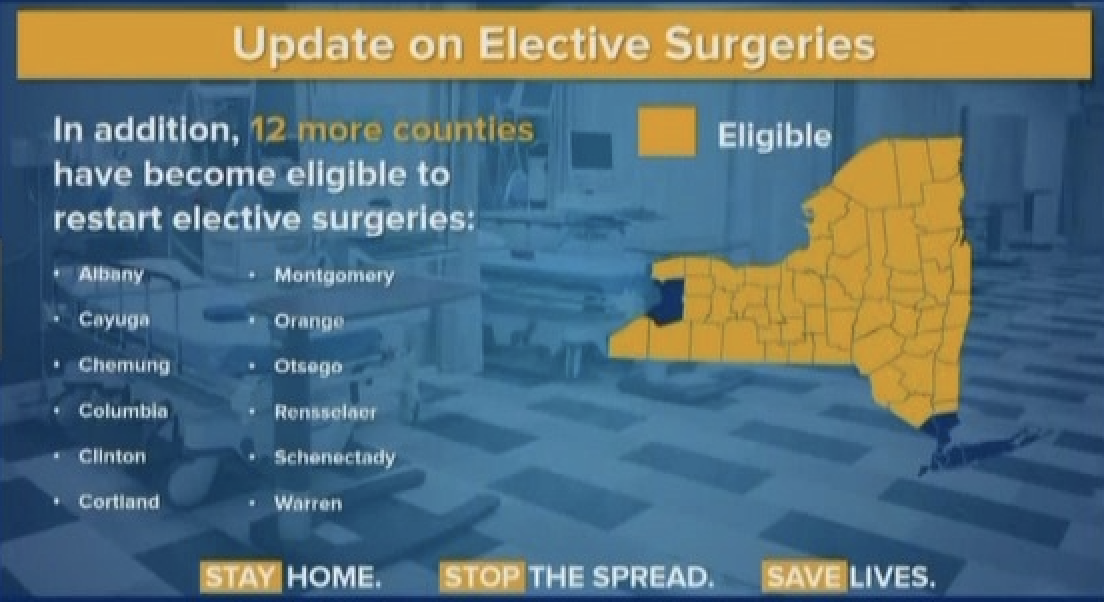