Dr. Anthony Fauci, the director of the National Institute of Allergy and Infectious Diseases, is also at the event, and is wearing a mask.

Iowa is reporting at least 374 new coronavirus cases on Friday, according to Gov. Kimberly Reynolds.

The use of ventilators and beds in intensive care units continues to go down, Reynolds said. So far, about 93,556 Iowans have been tested.

Iowan officials also said they have not encountered any case in the state involving the mystery illness tied to Covid-19 that appeared in children in many parts of the country and the globe.

For the first time, personal protective equipment will not be delivered across Iowa as the state’s stockpile is “in a good place right now,” Reynolds said.

Vermont Gov. Phil Scott announced today that he is extending the state of emergency for the coronavirus pandemic until June 15.

“This will allow us to continue responding and managing this public health crisis while we transition out of it,” Scott said.

“We’re also relaxing the ‘Stay at Home, Stay Safe’ order by aligning it with the sectors and social activities were already allowed to open and with our restart strategy," he added.

Scott said the last two months have felt like a year and it is “incredible” to think about all that has happened since early March. He went on to say that emotions are raw as they methodically reopen the state.

The governor said Vermont has the lowest three-day and seven-day growth rates in the country and their data shows they can continue slowly reopening.

“While our trends remain promising, we know we’re not out of the woods yet,” Scott said.

New York Gov. Andrew Cuomo said his state — along with New Jersey, Connecticut and Delaware — will all be opening beaches for Memorial Day weekend beginning Friday next week.

The states will have different, specific rules but “they’re all basically in the same ball park,” Cuomo said.

Here are the restrictions in New York:

With regards to municipal town and county beaches, local government can choose to open or stay closed. If they open, they must adopt the state requirements at a minimum. They are also allowed to impose additional requirements above and beyond, and must report their status by May 20 so the state can plan accordingly. 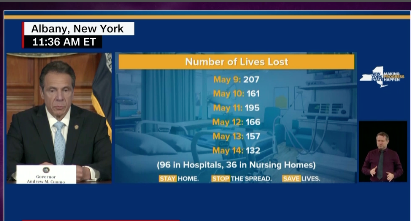 New York Gov. Andrew Cuomo said 132 people died across the state yesterday, adding the number of deaths is down “but still painful.”

The number of deaths has dropped to levels recorded late March, Cuomo said.

Cuomo said total number of hospitalizations and intubations are down, which is the “way we like to see it."

He said the number of new cases is up, but only "a tick.” Cuomo noted that the new cases are mostly coming from people who “are at home.”

“So we're talking about home spread,” Cuomo said. And that’s “the hardest place to control the spread.”

As five regions in New York begin reopening today, Gov. Andrew Cuomo warned that there will be an increase in coronavirus numbers — and officials must be ready to roll back some reopenings if the rate gets too high.

"We're starting to turn the activity valve," he said. "Watch what happens to the infection rate, testing rate, hospitalization rate. If those numbers start to move, slow down on the activity level."

Here are the industries that will resume operations in those regions:

With Ford set to reopen it plants across the country on Monday after nearly two months, about 71,000 workers will go back to work and there haven't been any furloughs or layoffs, according to CEO Jim Hackett.

“I'm trying to keep everyone here. It doesn't make any sense to put them on the social systems and put them out of work,” he said.

To reopen on Monday, Ford wrote a 70-page handbook on safety measures for its workers, he added.

“The idea is that we design the experience from the worker back,” he said. “We actually did role plays with people in terms of the kinds of questions they have as they come back to work, a day in the life of someone leaving their kids without any supervision because there's no school, and they need to show up at work. We worked that whole thing end to end so that we could find what we needed to do to make this really work for everyone and that's what made it 70 pages.”

Some of the safety measures at these plants will include social distancing, testing and the requirement to wear masks. Before the onset of the coronavirus pandemic, two workers would be inside the vehicle as it went down the assembly line. That will no longer happen, according to Hackett.

The automaker had kept some assembly lines open to produce personal protective equipment and ventilators, which will continue to be produced at the plant.

New York City Mayor Bill de Blasio said hundreds of people have been trained to begin contact tracing, and they are set to begin their work soon.

Responding to a question from CNN’s Mark Morales, de Blasio said that the city will have 1,000 contact tracers by the end of the month.

He said the pandemic has presented a “bigger, more complex and a much greater operational challenge than anything we’ve seen in the history of contact tracing in this city."

Experts from the Department of Health are being brought in for “maximum impact,” he added.

The House of Representatives is set to vote today on a $3 trillion coronavirus relief package and a historic rules change to allow lawmakers to vote remotely during the pandemic.

For some members, the Friday vote could be the last in-person vote they will attend for some time.

House Democrats' move to allow remote voting comes after weeks of talks over the possibility of changing House rules to allow committees to conduct business virtually and members to vote while away from Washington during the pandemic.

It will stand as one of the most significant rules changes the House has implemented in recent history. Here's what it would change: