New York City's Metropolitan Transportation Authority is looking into the idea of having people make a reservation to ride buses and subways, chairman and CEO Patrick J. Foye said during an interview on Fox 5.

Foye said they are considering a reservation system "in an effort to protect the health of our customers and our employees and to deal with the increase in ridership that will occur when Governor Cuomo begins to lift New York on PAUSE downstate," he told Fox 5.

But, he admitted "reservations would be a difficult thing to achieve."

One thing that is certain is all passengers will be required to wear masks.

"It is going to be mandatory for our customers and employees to wear masks and we can't emphasize how important that is," he said.

Subway ridership has been down nearly 90% because of the pandemic.

The US Centers for Disease Control and Prevention published a step-by-step guide aimed at helping officials decide if it is safe to reopen schools in their community.

"The purpose of this tool is to assist administrators in making (re)opening decision regarding K-12 schools during the COVID-19 pandemic. It is important to check with state and local health officials and other partners to determine the most appropriate actions while adjusting to meet the unique needs and circumstances of the local community," the guide, that was released yesterday, said.

The CDC recommends that schools complete all of the safeguards below each prompt in order to move to the next phase and ensure a safe reopening.

When schools are considering reopening, the decision tree asks: "Will reopening be consistent with applicable state and local orders? Is the school ready to protect children and employees at higher risk for severe illness? Are you able to screen students and employees upon arrival for symptoms and history of exposure?"

If the answer to any question is no, the CDC advises, do not open. 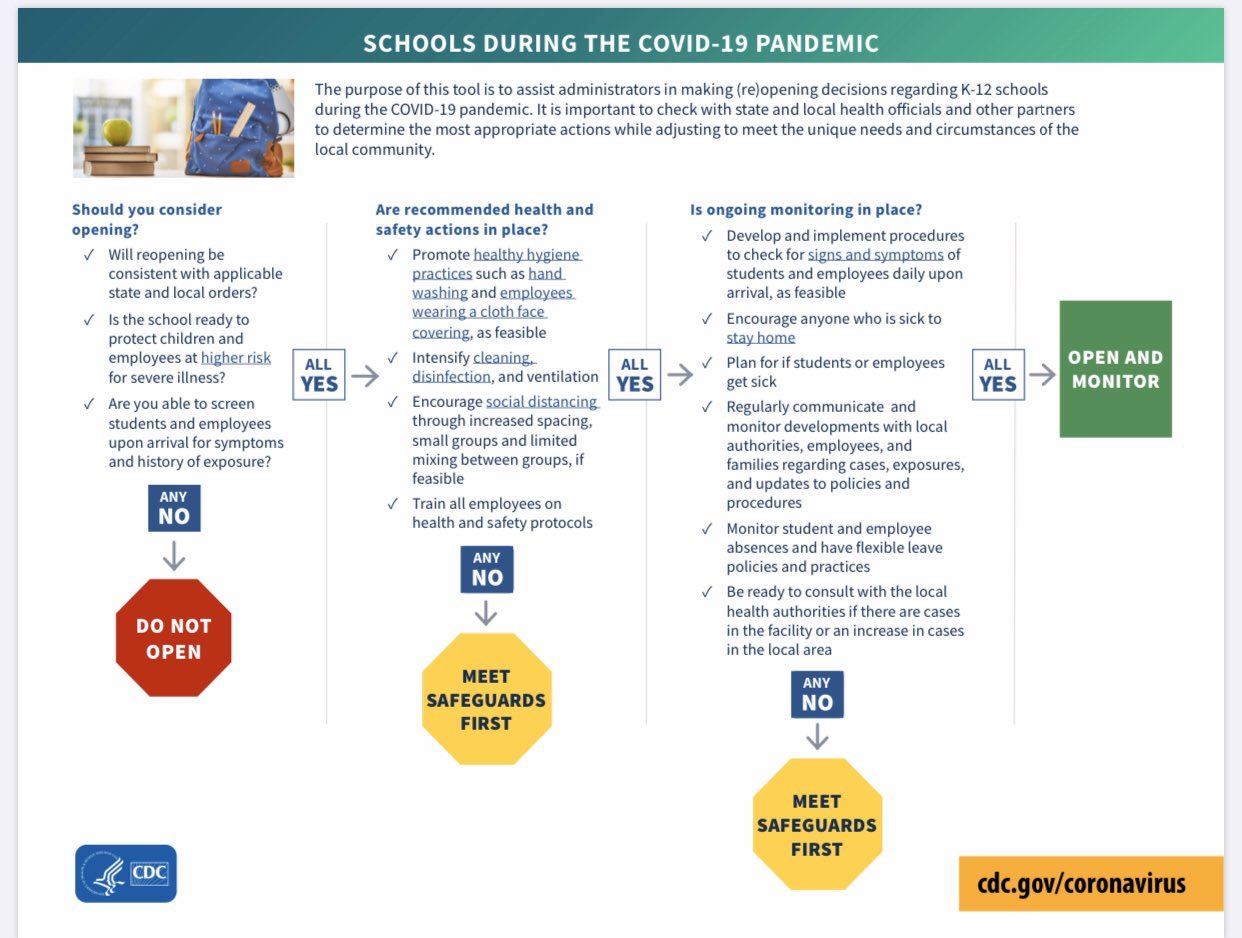 Some background: Dr. Anthony Fauci warned against reopening schools and businesses too quickly during a televised congressional hearing on Tuesday.

Fauci suggested that schools open cautiously, and said in some places schools should remain closed in the fall.

Meanwhile, administrators are trying to figure out how to get kids back, with options including everyone wearing masks, staggering start times and canceling assemblies and sports.

Here are the industries that will resume operations in those regions:

About the reopening dates: Cuomo issued a new executive order yesterday extending the state’s "On PAUSE" order until 11:59 p.m. on May 28, unless a region hits all of the 7 reopening benchmarks which will enable them to begin phase one reopening, Rich Azzopardi, a senior advisor to the governor, told CNN.

Additionally, according to the Thursday order, the state of emergency that allows each of the governor’s previous executive orders to remain in effect was extended to June 13.

“We are doing this in a calibrated way and monitoring the data, facts and metrics every single day and using the lessons we've learned from others who have already gone through this,” Cuomo said.

President Trump is scheduled to speak from the Rose Garden at noon today and make an announcement about coronavirus vaccine development.

Trump adviser Kellyanne Conway said that while the government has, "already been dealing with the private sector," President Trump will also discuss military partnerships at the event.

"I think you'll see Sec. Esper there for example, and General Mark Milley, because the military is involved as well," she said, "and the military will do what it needs to do to help deploy this vaccine once it is ready to be deployed."

"It's a scientific, logistical and military endeavor all at once, and the President will reveal to the country the two people who will be helping to lead the effort on the science side," Conway said.

CNN reported earlier this week Moncef Slaoui, the former head of the vaccines division at GlaxoSmithKline, has been tapped to lead the “warp speed” effort to develop a coronavirus vaccine, according to a White House official.

Another official said four-star general Gustave Perna has also been selected to help oversee OWS. Slaoui will be the chief adviser. Perna will serve as the chief operating officer.

Navarro pushed back on Bright’s testimony that there is still no “master coordinated plan” to combat the coronavirus.

“What we're doing is rapidly building up as much as we can. I can tell you that the stockpiles are going to be much bigger than they were. We're replenishing them, we’re moving on this, and I think we're going to be fine in the fall," Navarro said.

Navarro said that more than 100,000 ventilators will be produced in the US by the end of June.

More about Bright's testimony: Bright criticized the Trump administration for failing to implement a "standard, centralized, coordinated plan" to combat the virus and questioned its timeline for a vaccine. His testimony came a week after filing a whistleblower complaint alleging he was fired from his job for opposing the use of a drug frequently touted by President Donald Trump as a potential coronavirus treatment.

What else Navarro said: This morning, Navarro also commented on today's latest economic numbers. While US retail sales dropped 16.4% in April, according to the Census Bureau — the largest since the data series began in 1992 — the economy will be a lot stronger than the last 60 days, according to Navarro.

“What it suggests to me is that this has been a manufactured downturn that was done because we wanted to save lives,” he said.

Stay-at-home orders need to be weighed along with reopening guidelines, Navarro said. While he admitted that he is not comfortable with seeing people gathering in bars in Wisconsin, he said he understands their frustration.

“If you lock everything down, the direct deaths are less. However, if you shut the economy down, you also kill people through alcoholism, drug abuse, opioid overdoses, depression,” Navarro claimed.

America’s retail sales collapsed 16.4% in April, the lowest level since the data series began in 1992, according to the Census Bureau. The unprecedented month-to-month drop was worse than economists had expected and shines a light on how fragile consumer spending is during the pandemic.

All three major indexes are on track for a weekly loss.

Dr. Fauci — who testified before a Senate committee earlier this week — has not appeared alongside President Trump at the White House since April 29, when he delivered some good news on promising results of remdesivir clinical trials during a meeting in the Oval Office with Gov. John Bel Edwards.

However, he has been spotted at the White House multiple times, including in a Tuesday meeting with the Vice President and other task force members.

About the event: Earlier today, Trump adviser Kellyanne Conway told reporters President Trump will announce a development in the race to develop a vaccine for coronavirus,

"He’ll have a great announcement in the Rose Garden around the lunch hour about this vaccination development update," Conway said on the North Lawn of the White House. "He’ll be unveiling two professionals leading the effort, but that comes very quickly on the heels of the FDA cutting a ton of red tape and regulations to allow us to already be developing vaccines."

House Speaker Nancy Pelosi sent a letter appealing to her caucus to vote for the HEROES bill today–– a $3 trillion coronavirus stimulus package that was announced by Democrats earlier this week.

The House will vote today on the stimulus bill and a historic rules change to allow lawmakers to vote remotely amid the coronavirus pandemic.

Pelosi said the bill will make “a tremendous difference not only in the budgets of the states but in the lives of the American people.”

She urged members to consider the younger generation and the well-being of their own constituents when they cast their vote this afternoon.

Some background: The legislation — which provides funding for state and local governments, coronavirus testing and a new round of direct payments to Americans, sets up an immediate clash with the Senate — where Republican leaders have said another round of emergency funding is not yet needed.

Sen. John Barrasso, a member of Republican leadership in the chamber, warned that the new bill is dead on arrival. "That will not pass. It's not going to be supported," he said of the new legislation.

An advance reading from the Census Bureau showed US retail sales plummeted by 16.4% in April, the largest since this data series began in 1992. It's also significantly higher than the revised 8.3% sales drop in March.

As people continue to stay at home across much of the country, they're spending more on food than before but little on other things. And with mass layoffs leaving millions of Americans out of work, discretionary spending has been crunched.

Excluding autos, the overall drop in retail sales was even steeper at 17.2%. Many Americans are putting big purchases like cars on the back burner.

Particularly weak were sales at clothing and accessories stores, which were down a whopping 89.3% in April.

Retailers have been forced to shutter hundreds of thousands of stores during the crisis. Several have filed for bankruptcy in recent weeks, including Neiman Marcus and J.Crew. JCPenney is expected to file for bankruptcy in the coming days.

Some chains, however, have bucked the trend. Walmart, Target, Kroger and others are growing sales, as they benefit from Americans buying more groceries and home essentials as they are sheltering in place. Online shopping for essentials continues to boost Amazon.

In the long-term, analysts expect the crisis to further widen the gap between the industry's winners and losers.