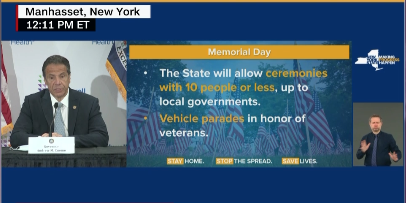 New York Gov. Andrew Cuomo announced that the state will allow ceremonies on Memorial Day with up to 10 people or less. Vehicle parades in honor veterans will also be allowed across the state.

The governor said local governments can decide if they want these ceremonies to occur.

“Memorial day is coming up. That is an important American tradition. We want to honor our veterans and we want to make sure that no matter what happens, we are still honoring our veterans,” Cuomo said.

Cuomo added that he hopes those ceremonies are broadcast and televised in their areas so that people can be part of “honoring that tradition.”

"There is no reason not to go to the hospital," he said announcing the reopening.

The state is also considering a pilot program to bring visitors back to hospitals, Cuomo said.

"It is terrible to have someone in the hospital and then that is isolated," he said, adding that certain safety protocols would be implemented as visitors return.

He said the death toll is "down dramatically from where it was in the first place, but still painfully high."

Hospitalization and intubation rates are down across the state, Cuomo added.

President Trump said Tuesday that the US should consider terminating trade deals related to the importation of cattle from other countries.

“I read yesterday where we take some cattle in from other countries because we have trade deals. I think you should look at terminating those deals,” the President said.

“We have a lot of cattle in this country and I think you should look at the possibility of terminating those trade deals,” he continued, adding, “We’re very self-sufficient, and we’re becoming more and more self-sufficient.”

The program, funded through the CARES Act and Commodity Credit Corporation Charter Act, will include $16 billion in direct payments to farmers and ranchers, the President said.

President Trump will be on Capitol Hill today for the Senate Republican lunch, a Senate aide tells CNN.

GOP Sen. Mike Braun said "nobody has told me" that he needs to get tested before lunch this afternoon, saying Trump's arrival was a surprise and just came up on their schedule about an hour and a half ago.

One source familiar with the matter said the realities of testing 53 members with limited resources or access to rapid tests means Trump is very likely walking into a room without knowing for sure the health status of people he will be meeting with.

But the room in Hart is one of the biggest in the Capitol and it's quite spacious, so it's possible to maintain social distancing.

The agreement as it stands forbids any non-essential travel, although commercial traffic and travel by essential workers, including those working in US hospitals, continues. 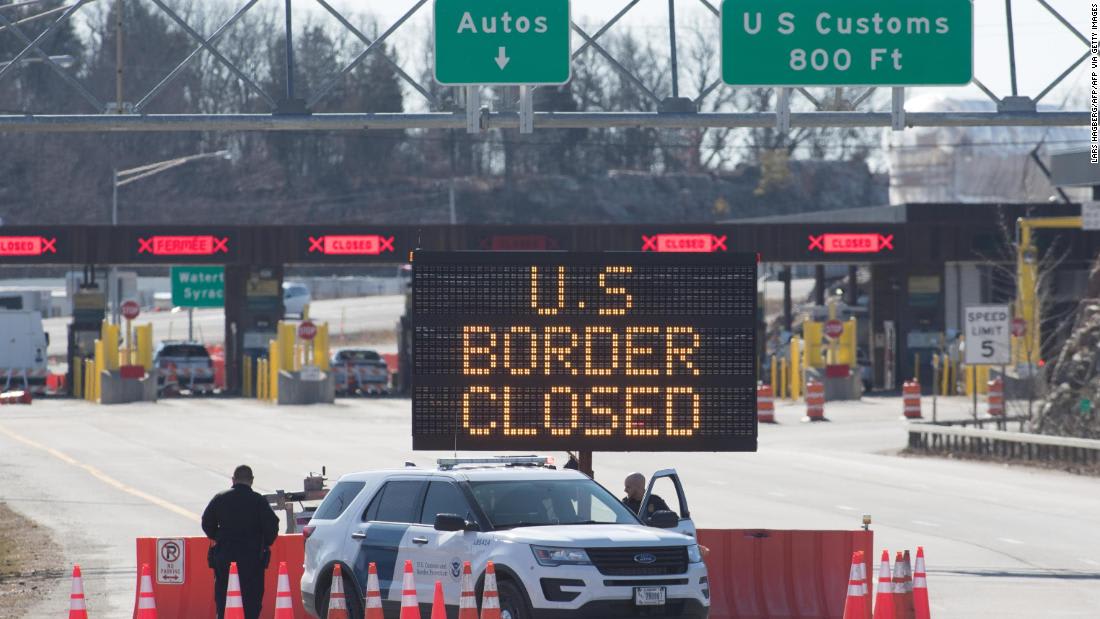 House Minority Leader Kevin McCarthy said he doesn’t see a need to have another relief package, telling CNN there’s been no change in his posture despite meeting with Vice President Mike Pence and Treasury Secretary Steven Mnuchin this morning about the economy.

“I don’t see the need right now,” he said of another package.

He said they talked about the economy, the number of states opening back up and progress in testing.

“No,” he said when asked if there’s been a change in his posture against moving now on another relief package.

Republican National Committee Chair Ronna McDaniel has vowed that the RNC will hold an in-person convention.

McDaniel said that there is a long way to go before the event, and party and convention organizers are taking steps to make sure that delegates, elected leaders and all attendees will be safe.

She also said that she has not heard any concerns from Republicans planning on attending the event.

“I have not heard any concerns yet from our delegates, our state party chairs, or national committee members about concerns," she said on a call with reporters. "There is ample time for us to adjust if necessary and people are very excited about the convention."

She added that the committee has brought on a medical officer who "will be advising us to make sure we are putting the health and safety of our convention goers first." She said she's also looking for guidance from the mayor of Charlotte and North Carolina's governor.

In response to a question about problems with a virtual convention held recently in Minnesota, McDaniel made it clear the national convention will be in person.

“I am not aware of the issues with Minnesota virtual convention if that is what you’re asking about, we will look into that, but we will not be holding a virtual convention. We are going to put all the safeguards in place to provide resources to our state parties as they hold their conventions," she said.

Some background: Despite concerns, Republicans are insistent that they will hold their convention — scheduled for Aug. 24 through Aug. 27 in Charlotte, North Carolina — in person. President Trump said last week he wants to have the convention in person, but said he was concerned that North Carolina Gov. Roy Cooper, a Democrat, may attempt to delay openings to impact the convention.

More than 270 “public servants” have died from coronavirus, according to New York City Mayor Bill de Blasio who said he thinks “the right thing to do is to help the families who have lost their loved ones.”

The mayor is officially asking the state of New York to authorize line-of -duty benefits to families of all city employees, including the NYPD or FDNY, who have died as a result of the virus.

“The city of New York believes, I believe, they deserve, their families deserve line of duty benefits for any death that was connected to Covid 19,” he said.

The mayor said he wants to take the “weight off the shoulders of these valiant New Yorkers.” He said the state legislature is the way to do this rather than through city budget changes.

The city supports the line-of-duty death benefits proposal in Washington, but the mayor said he wants to do more. “This horrible crisis came out of nowhere, grabbed this city and these valiant city employees kept fighting no matter what,” de Blasio said.

De Blasio also thanked Sens. Chuck Schumer and Kirsten Gillibrand for their efforts in Washington and noted the city has extended health insurance for 45 days at the request of the municipal labor committee.