World Health Organization (WHO) Director-General Tedros Adhanom Ghebreyesus said the organization is "looking into" President Trump’s threat to cut its US funding.

"On the letter, we have of course received the letter and we're looking into it. Thank you so much,” Tedros said a briefing on Wednesday.

What is this about: Earlier this week, Trump sent a letter to WHO telling the agency he plans to permanently pull US funding if WHO does not commit to improvements in the next 30 days.

Asked to expand about his plans to address the ultimatum, Tedros said, "So the answer is simply, we have received the letter, and we're looking into it.”

Tedros said the WHO budget is “very small” – at $2.3 billion a year, it’s comparable to a medium-sized hospital in a developed world.

“The objectives are to increase funding and improve the quality of the funding itself,” Tedros said.

A university in South Carolina announced that it is shutting down the men's varsity lacrosse and the varsity baseball teams in response to financial hardships caused by the coronavirus pandemic.

Furman University in Greenville, South Carolina, announced the sports cuts Monday along with other budget reductions including salary cuts and staff furloughs, according to a statement posted on the school's website.

"This is a difficult day for Furman athletics," athletic director Jason Donnelly said. "Our immediate focus is on supporting our student-athletes and coaches impacted by today’s decisions, as well as our alumni and fans who so passionately support our programs. The legacy of Furman baseball and men’s lacrosse will be remembered and celebrated."

Furman University is a private school with around 2,700 students and is a member of the Southern Conference.

With offices, retail and restaurants in Connecticut opening with restrictions today, all 50 states are on the path to reopening.

Gov. Ned Lamont said salons and barber shops, which were originally slated to reopen today as the phase one plan kicks off, are now opening on June 1 to align with neighboring Massachusetts and Rhode Island.

Connecticut is testing symptomatic and asymptomatic first-responders right now, and Lamont said that will be his “template” for community spread. Health officials have also warned him about the possibility of a second surge in the fall.

Lamont said that while he is worried about people adhering to all guidelines, the state is taking different regulations into account, and residents have largely taken restrictions seriously.

“We're looking at outdoor eating restaurants and make sure people track the protocols carefully; masks and gloves for waiters. We kept our beaches open, kept our parks open. We limited capacity there, and so far, the folks have really taken this seriously. They know how serious it is that you be careful, especially on a hot weekend like this coming up,” Lamont said.

Lamont also responded to President Trump’s remark yesterday that the high number of Covid-19 cases is a “badge of honor” because it means the US is testing more people.

“No, the number of people infected is no badge of honor. It's a tragedy. But perhaps what he meant to say is that if the percentage of people who are being tested lower and lower test positive, that's a good sign,” Lamont said.

Wheeler did not directly commit to investigating the issue.

“Early research has shown that people exposed to more air pollution then may have greater Covid-19 risk just like we saw with this SARS coronavirus,” Carper said during the hearing.

“Would you commit to reallocate unused EPA funds to study whether exposure to air pollution causes people with Covid-19 to have worse outcomes or more difficult recoveries, or to be more susceptible to other diseases once they have recovered. Could you commit to doing that, please?”

More from the exchange: Carper said there was a Harvard study that found links between air pollution and Covid-19 mortalities.

Wheeler responded: “We're looking at those research areas when there's a lot of other people are researching that as of now, you know the Harvard study that you mentioned, although the Harvard study has a number of issues and problems that Sen. (John Barrasso) mentioned, the other study in your staff report that you issued yesterday evening or early this morning.”

Wheeler responded, "All of our rules make things better, sir."

He said about 8,000 antibody tests have been conducted so far.

The overall NYC rate in these communities is 19.9%. Overall, 27% of individuals tested positive for Covid-19 antibodies.

Here is a breakdown by borough of preliminary antibody test results at church sites:

“The spread is continuing in those communities,” Cuomo said.

Communities hardest-hit are located in ZIP codes that are lower-income and have high Hispanic and African American populations.

In the Morrisania neighborhood of the Bronx, for example, Cuomo said that 43% of residents tested were positive for coronavirus, whereas the general New York City number is close to 20%. In Brooklyn’s Brownsville section, which has about an 80% black population, 41% tested positive. The neighborhood also has about double the rate of average hospitalizations.

The governor thanked politicians and community leaders for spearheading an effort to mobilize churches as coronavirus test sites. He said that testing will be expanded to more churches and public housing developments in the city.

"They can have up to 10 people, with strict social distancing guidelines at religious gatherings," Cuomo said at a news conference.

He said he's encouraging religious communities to consider holding drive-in services in parking lots, and he added that he understands people's desire to get back to their places of worship.

"As a former alter boy, I get it," he said. "I think those religious ceremonies can be very comforting."

Cuomo said he is convening the Interfaith Advisory Council to discuss a proposal to safely bring back religious services across all faiths. 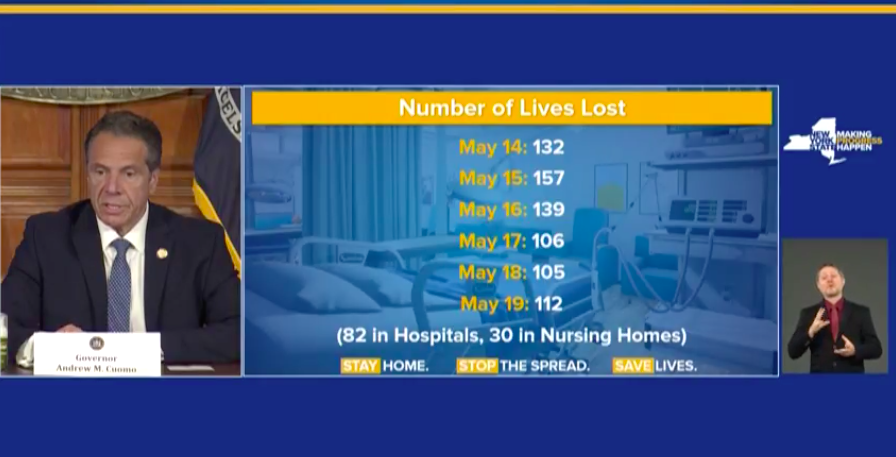 New York Gov. Andrew Cuomo said today that Covid-19 deaths in the state were "up a little bit" yesterday.

Daily deaths increased from 105 to 112 yesterday, the governor said.

Other key indicators -- hospitalizations, new cases, ICU admin -- were all down and "heading in the right direction," the governor said.

He noted "it was a long road down" in terms of these figures.

A spokesperson confirmed Monday that the Texas health department had been combining antibody test numbers with active infection test numbers when reporting overall data to the public, an indication that the positivity rate number could be skewed, though it's not clear by how much.

Chris Van Duysen, a spokesperson for the Texas Department of State Health Services, said in an email Monday that the state "will be separating the numbers out this week" and is "working to integrate that into our online reporting."

His comment came after Texas Gov. Greg Abbott was asked at a press conference Monday if the state is combining the two numbers in its public data, following a report by the Texas Observer that the state health department confirmed it was combining them.

Abbott said Monday that the state is not presently combining the numbers but did not acknowledge that it had been in the past.

"The answer is no. They are not commingling those numbers," Abbott said. "Those numbers will be provided separately."

Texas State Rep. Chris Turner, who leads the House Democratic Caucus, found Abbott's statement puzzling and reached out to the health department after the press conference.

"They confirmed to my staff that in fact the testing total does include the antibody test. They said they would be breaking those out later in the week," Turner said. "But for now the total number of tests reported includes both types of test."

Turner argued that combining the numbers "really muddies the data" and "indicates that our testing total is inflated."

The Department of State Health Services did not provide CNN more specifics Tuesday on what percentage of the total tests being reported are antibody tests.

The state is reporting a total of 49,912 positive cases. The state's coronavirus dashboard did not yet reflect a distinction in antibody tests versus active virus tests.

Abbott has been touting the low positivity rate in the state. It's unclear how many of those positive cases are from antibody tests or active infection tests.

More on the tests: Viral infection tests are usually conducted through nasal swabs and look for the virus’ genetic material, which may be evidence of an active infection.

Antibody tests use blood samples to look for evidence of past infection. Critics argue that combining the two tests in overall testing data makes it harder to present an accurate picture of the timeline of spread in a given area and could overstate a state’s ability to track active infections.