A new report found that at least 151,964 Americans died due to alcohol, drugs or suicide in 2018 and it warns Covid-19 could exacerbate the so-called “deaths of despair.”

The study by Trust for America’s Health and Well Being Trust showed deaths due to alcohol and suicide rose, while drug overdose deaths declined from the previous year.

“While still disturbingly high, the 2018 data is the first time since 1999, when the current data collection began, that there has not been a sizable increase in the alcohol, drugs and suicide deaths per 100,000 rate,” according to a statement from Well Being Trust.

In 2018, alcohol deaths rose 4% for the year and suicide deaths were up 2%. Death rates for opioids declined, but the death rates for synthetic opioids such as fentanyl increased, as did death rates for methamphetamine, ecstasy and prescription stimulants.

The report said that drug-induced deaths among American Indians, Asians, blacks and Latinos all increased from 2017.

“The profound racial health disparities seen in these data show that many ethnic minority groups are being left behind in our response efforts,” said Dr. Benjamin Miller, chief strategy officer with Well Being Trust.

Remember: Well Being Trust, a national public health group, also sounded the alarm earlier this month saying as many as 75,000 American’s could die because of drug or alcohol misuse and suicide as a result of the coronavirus pandemic.

Economic downturns, stress due to isolation and a global pandemic could significantly increase these types of deaths, it said.

The Transportation Security Administration said it is making some changes to its security screening procedures at airports, but did not include passenger temperature screening in its list — something a federal official has told CNN the agency is considering.

The agency said passengers should hang onto their boarding passes, rather than handing them to TSA officers, to prevent cross contamination. Instead, officers will visually review the boarding pass.

The TSA also said that when a bag does not pass X-ray screening, passengers may be responsible for unpacking the bag and sending it through the X-ray machine again, rather than an officer searching through it by hand.

The agency is encouraging travelers to pack food items in a clear plastic bag to make it easier for officers to check them. Food items sometimes require further inspection by TSA.

The novel coronavirus has infected more than 5 million people worldwide and killed at least 328,000. If you're just tuning in, here are the latest headlines:

The Supreme Court and courts across the country will see an increasing number of pandemic-related disputes in the coming weeks concerning prison conditions and whether prisons are violating the constitutional rights of inmates by failing to adequately protect them against the coronavirus.

Inmates are raising concerns about what they call the deliberate indifference of prison officials during a serious public health crisis and asking for home confinement or appropriate resources to improve hygiene and block the spread of Covid-19. For their part, state and federal officials are pushing back hard arguing that they are trying to respond to evolving risks while battling an unprecedented global pandemic.

Justice Sonia Sotomayor sent up a flare up this month after inmates argued that their prison conditions amounted to cruel and unusual punishment.

"It has long been said that a society's worth can be judged by taking stock of its prisons," Sotomayor wrote.
"That is all the truer in this pandemic, where inmates everywhere have been rendered vulnerable and often powerless to protect themselves from harm."

The issue is further complicated by the fact that federal law that governs prison conditions requires an inmate to exhaust a grievance process set up by correctional officials before turning to litigation.

That system was put in place to keep frivolous litigation out of courts and give prisons the chance to remedy a problem before a lawsuit. But it never envisioned a pandemic like Covid-19 that is ripping through prisons filled with at-risk inmates.

China’s Ministry of Foreign Affairs has lashed out at US Secretary of State Mike Pompeo amid a growing war of words between Beijing and Washington.

“[Pompeo] has played to perfection the part of an extremely irresponsible politician, but his numerous lies have bankrupted his credibility in the world,” Ministry of Foreign Affairs spokesperson Zhao Lijian said on Thursday.

Zhao also questioned the US response to the coronavirus pandemic, asking “why didn’t the US government take any prevention measures from January through til March, why did it advise people not wear masks for so long, why did it fail to stem the spread of virus[?].”

Tensions over the pandemic and trade have reignited tensions between the US and China in recent weeks.

The Trump administration announced Wednesday that it had approved another potential arms sale to Taiwan.

Zhao said in response: “China is firmly opposed to the US arms sales to Taiwan and has made solemn representations to the US. We urge the US side to strictly abide by the one-China principle and the provisions of the three Sino-US joint communiques, and stop arms sales to Taiwan and military links between the United States and Taiwan to avoid further damage to Sino-US relations and peace and stability in the Taiwan Strait.”

President Trump criticized China's response to the pandemic in a series of tweets posted late Wednesday night, accusing Beijing of "trying desperately to deflect the pain and carnage that their country spread throughout the world."

He claimed the Chinese government "could have easily stopped the plague, but they didn’t!"

“The Chinese government has always adhered an open, transparent, and responsible attitude, and insisted on speaking with facts," Zhao responded on Thursday.
"Who is going all out to safeguard people's lives and health, and who is doing everything in their power to promote international cooperation? I believe that justice is [in] people’s heart[s], and the world will see [that] clearly."

A series of US states have been combining two different types of coronavirus test results in their total numbers, potentially providing a muddled picture of the pandemic as the nation eases restrictions.

Why this is a problem: Combining the two types of tests overstates a state's testing ability, a crucial metric as nearly all states ease coronavirus restrictions. Experts have consistently emphasized that for states to reopen, there has to be adequate testing and tracing.

"Public health officials need to know how many people in my state or my community currently have Covid-19. They also need to learn how many people had it in the past and potentially are immune to it," said Elizabeth Cohen, CNN's senior medical correspondent. "Those are two completely different things."

States' response: Texas, Virginia and Vermont said they've recognized the data issue and moved to fix it in the past few days.

Georgia health officials said they've been adding both tests to their daily totals since April in line with the methodology from the Centers for Disease Control and Prevention. 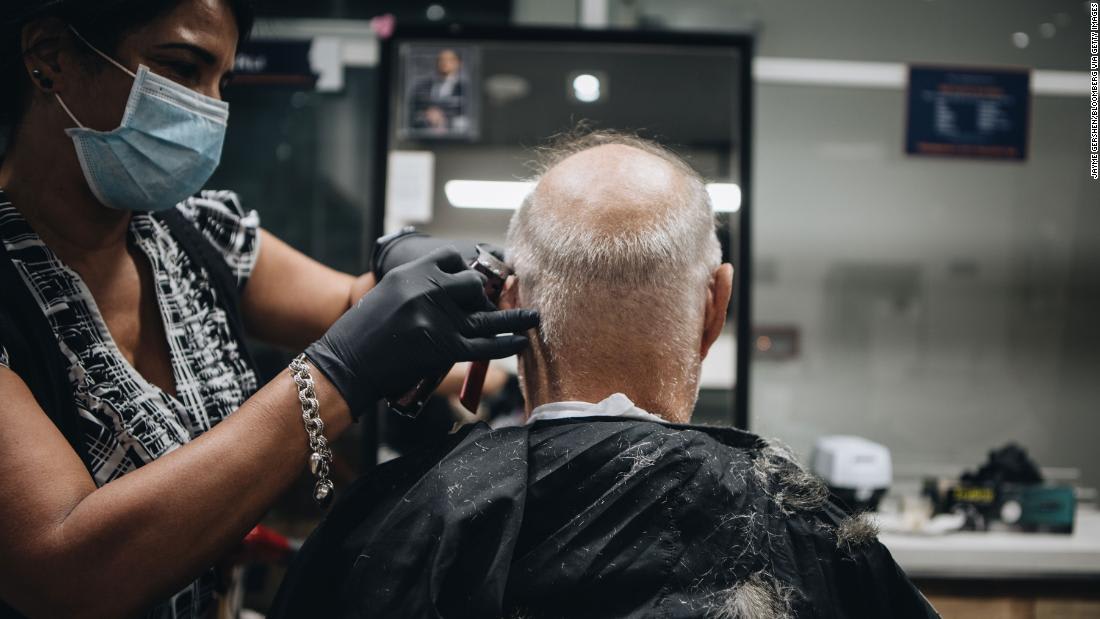 As the world slowly eases its way out of the Covid-19 lockdown, we're on the verge of a new era in air travel.

We could soon encounter armies of robotic cleaners patrolling airport concourses, disinfecting check-in counters and ticket kiosks. We might see passengers wafting through security and baggage checkpoints without touching anything.

And we might be boarding aircraft where hand gestures and eye movements open overhead stowage bins and navigate our inflight entertainment screens.

Everything could become touch-free. Out go the tailored uniforms, in come astronaut-style anti-Covid-19 flight attendant suits.

Most of these concepts are trials but could soon morph into realities that become as ubiquitous as the biometric gates and body scanners to which we've already become accustomed at airport terminals.

At least 93,439 people have died in the US from coronavirus, according to Johns Hopkins University's latest tally.

There are at least 1,551,853 cases of the disease in the country. The US has the highest number of cases in the world.

CNN is tracking coronavirus cases across the US here.

The US Centers for Disease Control and Prevention has posted 60 pages of detailed guidelines on how to reopen the United States from coronavirus pandemic stay-at-home orders on the agency's website.

The guidance was a slightly shorter version of a 68-page document shelved by the White House last week after concerns it was too specific.

Still, the latest CDC document was very descriptive, providing a detailed road map for schools, restaurants, transit and child care facilities on the categories to consider before reopening.

CNN previously reported one of the main hold-ups for publishing the CDC documents was the Department of Health and Human Services' Office of Civil Rights Division felt that faith-based organizations were being unfairly targeted.

In drafting the document, the US Department of Health and Human Services' Office for Civil Rights asked the CDC to ease social distancing recommendations for those groups, encouraging federal health officials to let churches congregate, an official involved told CNN last week.

According to the official, HHS officials "made" them take out a reference to Communion plates, despite a scientific review that confirmed one of the ways people can contract the virus is by drinking out of a Communion cup. Health officials outside of HHS, but still involved in guidelines discussion, raised concerns about this request.