New York City Mayor Bill de Blasio said today that the city wants to do 50,000 tests per day by August 1.

The first focus will be those with symptoms, close contact with someone who tested positive and people in facilities such as adult-care facilities, nursing homes and shelters.

"It’s good for you, it’s good for everyone," de Blasio said at his daily press briefing today.

There will be 180 sites to test New Yorkers by the end of June.

The city is opening 12 new testing sites through its public hospital system over the next few weeks in all five boroughs.

If you have insurance, the test will be charged to your insurance.

New Jersey Gov. Phil Murphy announced on Twitter that the state's professional sports teams may return to training and competition.

He also announced that starting in July, schools will be allowed to host outdoor graduation ceremonies. Those events must comply with social distancing, he said.

A third US service member has died from Covid-19, the Pentagon disclosed Tuesday.

More than 6,000 US service members have tested positive for coronavirus, and there are at least 9,173 cases across the entire Department of Defense.

“We're really, really hoping that policymakers have gotten the message that this is actually something that’ll backfire on the hospitality industry unless we extend the forgivable date to at least 24 weeks and not eight weeks. In order to have those loans be forgiven, you have to have hired back three quarters of your staff by June. That just won't happen,” Meyer said.

Meyer predicts that people will not feel confident going into restaurants for a long time, particularly in New York City.

“I think it’s going to take a number of things for consumers to regain their confidence to go into restaurants. And I think it may be some type of treatment, it may be a vaccine, it may be testing of your entire staff, it may be some type of health pass where you know that everybody else who is dining there has gone through the same scrutiny you've gone through,” Meyer said. “It is going to take confidence, and once we have that demand, and once we know it is safe, we will open our doors."

Meyer also told CNN’s Poppy Harlow he is confident that restaurant jobs will ultimately come back, but not right away.

“This is not going to be an immediate light switch where all of a sudden everybody feels safe coming back to dine. And restaurants are going to have to gradually up their staff levels in accordance to how many people are dining there,” he said.

New Rochelle, New York – once the epicenter of the coronavirus crisis in the state – will begin reopening Tuesday.

The city’s mayor, Noam Bramson, said it can "take special satisfaction in reaching this milestone and can be confident in our capacity to make further progress toward a full reopening”

“Having faced COVID-19 among the earliest in the nation, the people of New Rochelle can take special satisfaction in reaching this milestone and can be confident in our capacity to make further progress toward a full reopening. The resumption of construction and retail pickup in Phase I will be a welcome boost to our local economy, and New Rochelle is already making plans to accelerate our recovery through both business and individual assistance. But it is premature to let down our guard. All of us must continue to act responsibly, practice physical distancing, use face coverings, and follow other guidelines intended to safeguard our health at both home and work.”

Most House Republicans are expected to return to the Capitol this week to vote in person despite the new rules allowing lawmakers to vote remotely, showing the continuing divide between the two parties over whether it's safe to return to work.

Democrats, concerned about the safety of returning to the Capitol, pushed through the first-ever change to House rules allowing lawmakers to vote remotely on the floor by designating members to vote at their direction and on their behalf. They plan this week to employ those rules, which allow a member to vote on behalf of up to 10 members. It's uncertain how many Democrats will use those new rules or return to vote in person.

But Republicans are sharply critical of the rules change and argue that the House can return to session by modifying some of their practices to promote social distancing. If Republicans decided to vote remotely, they would undercut the concerns they've raised about the constitutionality of the new rules.

GOP leadership aides said yesterday morning that they expect most of their members to return when the House is in session tomorrow and Thursday.

The divide within the House reflects the larger split between the two parties about whether it's safe to reopen the economy as quickly as President Trump has sought — or whether states should be far more cautious in their handling of the public health crisis.

The House plans to vote this week on changes to the federal Paycheck Protection Program to give small businesses more time to use emergency loans provided under legislation enacted this spring. The House also plans to vote on a measure to reauthorize expired federal surveillance laws.

A New Jersey pastor defied state orders and held mass on Sunday, saying that the governor needs to classify churches as “essential.”

“We feel that we have our First Amendment right to open up our church at this time,” Pastor Charles Clark III, co-pastor of Solid Rock Baptist Church in Berlin, New Jersey, told CNN.

Gov. Phil Murphy said the state would issue summonses to the church for breaking the lockdown order. Clark said he expects to receive citations.

“The governor has discriminated against churches and mosques and against synagogues,” he said. “We as a church have a First Amendment right and [Murphy’s] chosen to say: Walmart, grocery stores, liquor stores, they can be open the whole entire time, and … they're not doing it nearly as safe as our church is doing it.”

Clark said that he did not wear a mask while preaching on the church platform, but he did at all other times.

Talking loudly can release droplets a further distance, which is potentially dangerous for coronavirus exposure, according to biology professor Erin Bromage.

When CNN’s Alisyn Camerota said that “it is actually your behavior in front of the congregation that could possibly be the riskiest,” Clark said he did not agree.

“I don't think that's uncommon — including in press conferences and where the President and others have spoken — that there is a distance between us and the parishioners, and so every time we come off the platform, we do put our mask on,” he said.

He said there was no choir, reservations for seats to ensure social distancing, touchless entry and bathroom sanitization measures.

“Other than wearing maybe a hazmat suit, I don't know what else we could have done to make it safer on Sunday,” he said.

US stocks rallied at the start of the shortened week, boosted by optimism over the continued reopening of the US economy and a potential Covid-19 vaccine.

The market had been closed for Memorial Day on Monday.

Here's how things looked at the opening:

More context: US biotechnology company Novavax began human trials for a potential coronavirus vaccine in Australia. The company’s shares soared 15% at the open. 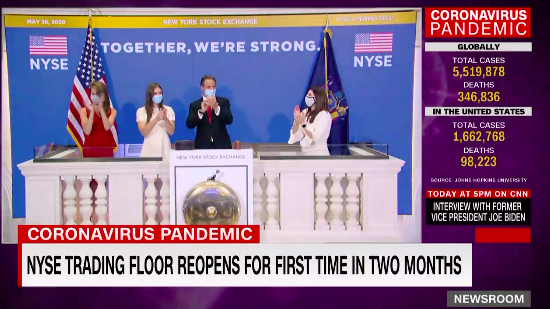 New York Gov. Andrew Cuomo was on Wall Street this morning to ring the bell on the floor of the NYSE to mark the trading floor's reopening.

The Dow Jones Industrial Average jumped over 600 points at opening on the news of potential progress with a coronavirus vaccine.

Some more context: After months of electronic-only trading, the New York Stock Exchange is set to reopen the trading floor today.

Here's some more detail on the safety measures the stock exchange is putting in place today: 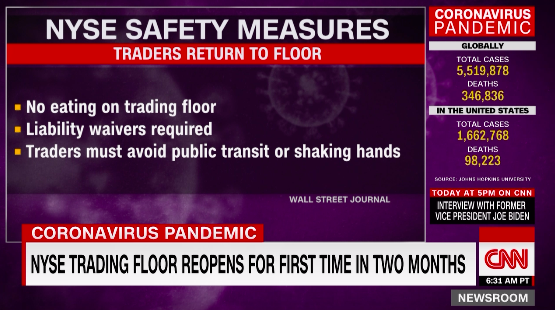