President Trump is “feeling perfect” after concluding his use of hydroxychloroquine as a prophylactic against coronavirus, White House press secretary Kayleigh McEnany said Thursday.

McEnany said she asked Trump about how he’s feeling just prior to the White House press briefing. She said he told her "he’s ‘feeling perfect," "he’s feeling absolutely great after taking this regimen" and that he "would take it again."

McEnany went on to promote research suggesting there are benefits to using the drug to prevent the contraction of coronavirus.

“It’s important, of course, always, if taking hydroxychloroquine, get a prescription from your doctor. Doctors are the ones that need to be prescribing this,” she added, before claiming that there had been hyperbole regarding the drug’s safety.

Some context: The drug is only FDA-approved to treat or prevent malaria or to treat autoimmune conditions such as lupus and rheumatoid arthritis. While so-called off label prescribing of the drug to treat other conditions is legal, it has not been found by the federal government to be safe or effective for any other uses.

And CNN previously reported this week that the World Health Organization temporarily halted studying hydroxychloroquine as a potential Covid-19 treatment on Monday due to safety concerns.

The decision came after a publication in the medical journal The Lancet on Friday suggested that seriously ill Covid-19 patients who were treated with hydroxychloroquine and chloroquine were more likely to die.

Virginia Gov. Ralph Northam announced today that the state will remain in Phase 1 of its reopening for a minimum of another week in order for the state to continue to collect more health data.

The governor said however, that the state’s trends are encouraging as more people are being tested and the percent of positive tests continues to trend downward.

The governor did announce, that as of tomorrow, all public beaches in Virginia will be allowed to reopen to recreational activities, with guidelines including social distancing, sanitation, and no large gatherings of more than 10 people, no tents, no alcohol, and no group sports.

Virginia is also revising orders today, to allow NASCAR and horse race tracks to run single day events under strict guidelines starting tomorrow. These events will not be open to the public, and no spectators will be allowed, the governor said.

New York City has 16,673 confirmed and 4,742 probable coronavirus deaths as of May 28, according to the most recent data on the city website.

The New York City Health Department defines probable deaths as people who did not have a positive Covid-19 laboratory test, but their death certificate lists as the cause of death “Covid-19” or an equivalent.

More data: There have been 198,255 coronavirus cases and 51,449 people have been hospitalized due to the virus, according to the city.

The data is from the New York City Health Department and was updated on May 28, according to the website.

North Carolina Gov. Roy Cooper told reporters on Thursday that the state is ready to hold the Republican National Convention in a safe way.

Conversations are ongoing with the RNC over how to safely host the event this August in Charlotte, Cooper said. The RNC was asked to submit plans but they have not received anything yet.

“We want to work with them and look forward to them submitting plans to us, “ Cooper said.

Some context: President Trump had threatened to pull the convention out of North Carolina earlier this week.

"They must be immediately given an answer by the Governor as to whether or not the space will be allowed to be fully occupied. If not, we will be reluctantly forced to find, with all of the jobs and economic development it brings, another Republican National Convention site," Trump tweeted.

Boston Mayor Marty Walsh announced today that the 2020 Boston Marathon will be canceled.

The Boston Athletic Association has determined that the traditional one day running of the 124th Boston marathon will not be feasible this year, he said during a news conference.

“There’s no way to hold this usual race format without bringing large numbers of people into close proximity," Walsh said. "This kind of event would not be responsible or realistic on September 14 or anytime this year.”

Walsh called this a “difficult adjustment," but said that “meeting tough challenges is what the Boston Marathon is all about.”

White House press secretary Kayleigh McEnany said President Trump takes the number of US deaths from Covid-19 “very seriously” as she defended how long it took him to address the country hitting 100,000 deaths from the virus.

“The President recognized that landmark before we even hit it,” McEnany said during a press briefing Thursday. “After all, it was the impetus behind him lowering the flags to half-staff. He did that for several days.”

Pressed by CNN’s Jim Acosta about why it took Trump 13 hours to comment on the landmark number of deaths, McEnany said that Trump “takes it very seriously.”

She said the President has called it the “hardest part of his presidency,” and “something no one wanted to see happen.” 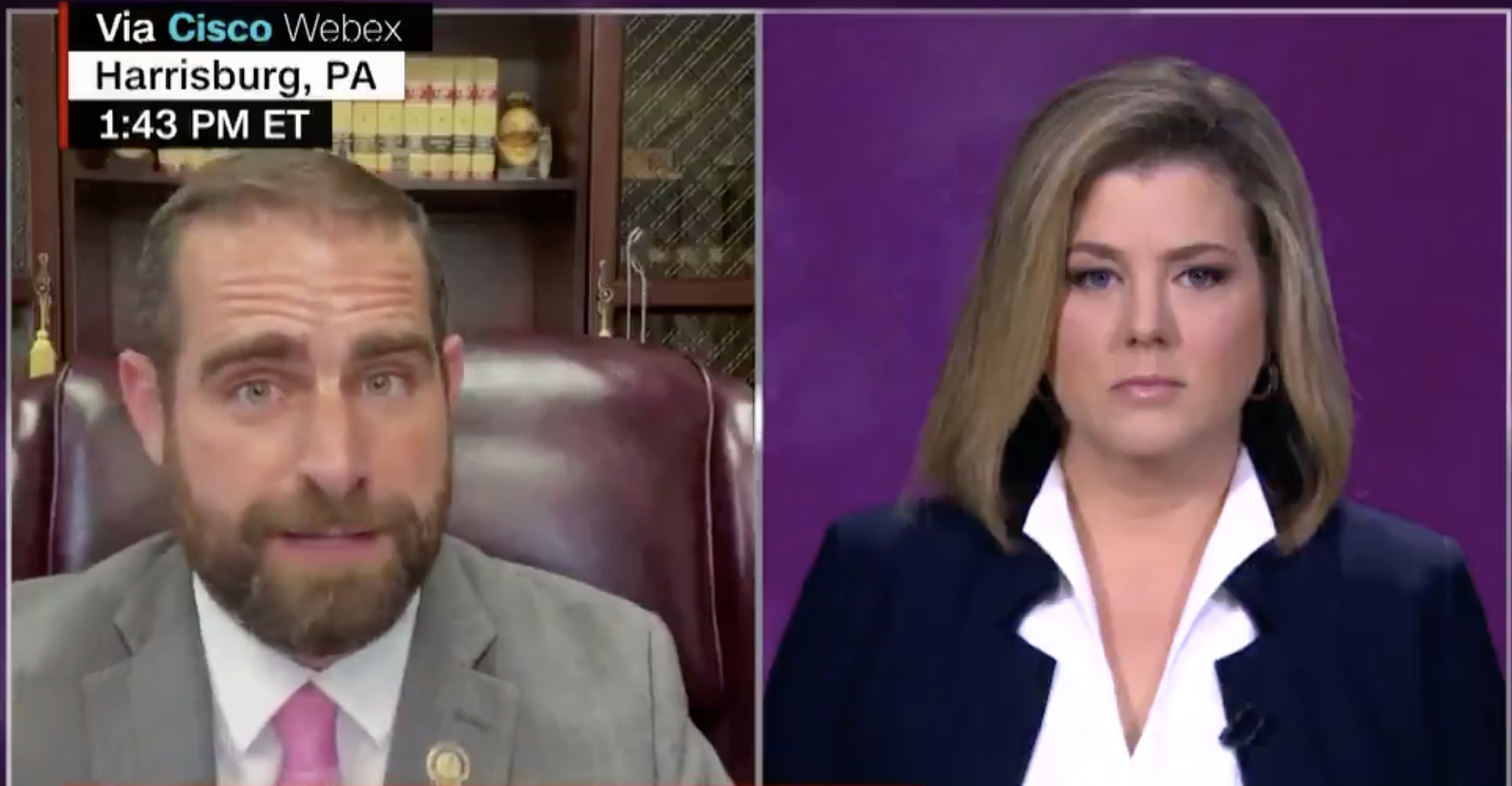 GOP State House Rep. Andrew Lewis tested positive for coronavirus on May 18 and Democratic members were not told until a week later, CNN’s Brianna Keilar reported.

Lewis’ last day in the state Capitol building was May 14.

Sims, who is immunocompromised, slammed it as a “coverup” and said it put the lives of lawmakers, families and constituents in “grave risk.”

"This idea that by simply quarantining maybe the last two or three of his own colleagues that he interacted with after finding out he was positive is the same as a contact trace that's required by public health and the CDC is laughable if it wasn't so deadly," Sims said.

“We’ve not asked for the name of any person that’s test positive, but we do need to know what committees they serve on, what days they were in the building,” Sims said.

Sims added that the Pennsylvania legislature has probably met in-person more than any other legislature in the country during the pandemic, going against the advice of health experts.

He said the state has the testing capacity it needs to deal with the outbreak.

"Now all of a sudden we've an outbreak in one of the prisons and so what do we do?" Justice said. "We do exactly what we should do and that is run to that fire."

Jeff Sandy, secretary of the state's Department of Homeland Security, announced plans to test all 13,966 inmates, employees, and contractors who work in correctional facilities.

Justice said the state will be offering free testing over the weekend in Huttonsville so "we don't have a situation where we are leaking out into the community and having additional positives."

The governor also highlighted a tweet that came from President Trump just moments before the news conference began announcing that he would be extending the National Guard's Title 32 orders through mid-August "so they can continue to help States succeed in their response and recovery efforts."

"[Trump] has done a fabulous job in every way and I love him to death," Justice said. "I'm tickled to death that he listened to a lot of people including his little buddy here in West Virginia so we got that extension until mid-August."

Justice also announced there were no new deaths in his state.

Iowa officials announced today a coronavirus outbreak at the Tyson Pork Processing Plant in Storm Lake, where at least 555 of the 2,517 employees tested positive for the virus.

Buena Vista County, the location of the plant, currently has 700 cases of Covid-19 and saw a sharp spike of 427 new cases two days ago, according to state data.

Tyson, in a statement, said that they have "been working closely with local health officials" and the company "has conducted large-scale Covid-19 testing in Storm Lake."

"This is part of our efforts to help communities where we operate better understand Covid-19 and the protective measures that can be taken to help prevent its spread," the statement said.

The announcement comes as state officials have been facing questions about their transparency in releasing this information.

Yesterday, Iowa Department of Public Health Deputy Director Sarah Reisetter said that the state would only confirm outbreaks at businesses if 10% of a company's employees test positive and only if asked.

"We've been announcing them at these press conferences as the questions have been asked," Reisetter said.

She added, "Businesses are not currently required to report outbreaks to the department of public health."

Furthermore, she noted that "it is a sensitive balance between protecting patient identity and protecting the health of the public."