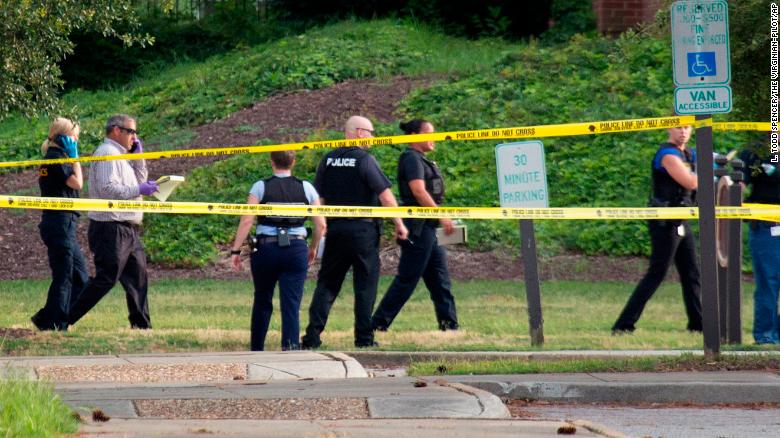 At least 12 people were killed by a gunman who opened fire at a city building in Virginia Beach, Virginia. Four other victims were also hospitalized.

The incident is the deadliest mass shooting in the US since November.

Cassetty Howerin, 23, who lives below the shooter, told CNN affiliate WAVY she could hear him awake at all hours of the night.

“I’m petrified, because I live right under him so that could’ve been easily me, or my girlfriend, or my roommate," Howerin said.

"He seemed like a nice guy, he introduced himself when we first moved in…it’s just crazy,” she said.

The Police Department had announced the "Active Threat Citizens Defense" event on Facebook. It aimed to "enhance preparedness for citizens to 'rise to the occasion' instead of 'settle to the level of their training,'" according to the Facebook page.

Berlucchi said today's shooting is "the worst nightmare for our city."

"I know that our public safety professionals train for events like this," he said. "Many people in the community, including myself, have watched the news unfold at communities and cities all around country and around the world and to tell you the truth, it's in human nature and natural to wonder when or if an event like this could occur in our city. I'm so sad and distressed by the fact that it has unfolded in Virginia Beach today."

The Virginia Beach shooting suspect is DeWayne Craddock, according to a law enforcement official and a Virginia government source.

DeWayne Craddock, 40, worked as a certified professional engineer for the city of Virginia Beach in the Public Utilities Department. He is listed on department press releases as a point of contact for information on local road projects over the last several years. A search of online court records in Virginia Beach and surrounding counties shows Craddock was cited for a motor vehicle infraction in 2013, but nothing else.

According to a 1996 news report, Craddock served in the Army National Guard as a private after attending Denbigh High in Newport News. 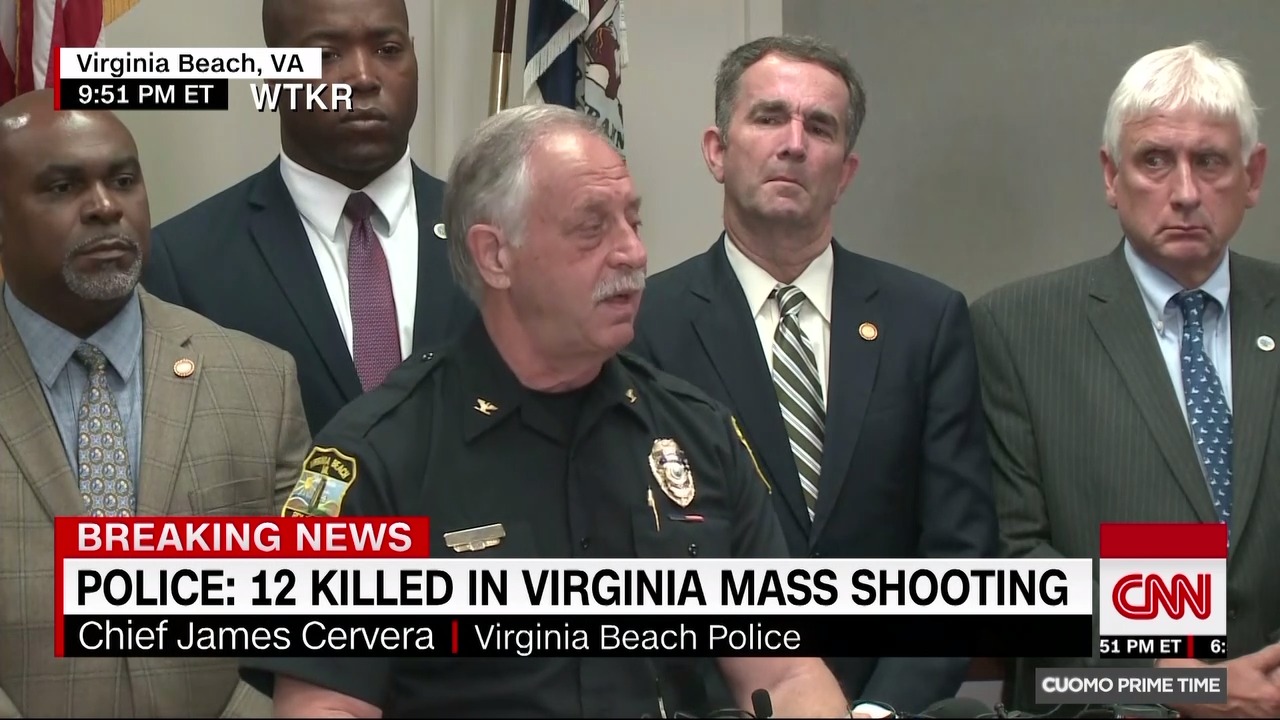 Virginia Beach Police Chief James Cervera said officers were able to locate the suspect inside the building due to the sound of gunfire.

Four officers arrived to building, which houses public works, public utility and a printing operation, and heard the gunshots, the chief said at the news conference.

"They immediately engaged with the suspect, and I can tell you that it was a long gun battle between those four officers and that suspect," Cervera said.

He said officers recovered a .45 caliber handgun, with multiple extended magazines that were emptied at the time.

The chief went on to say the suspect was reloading the extended magazines in that handgun, firing at the victims in the building and at officers.

"I want you to know that during this gun battle, basically the officers stopped this individual from committing more carnage in that building," Cervera said. 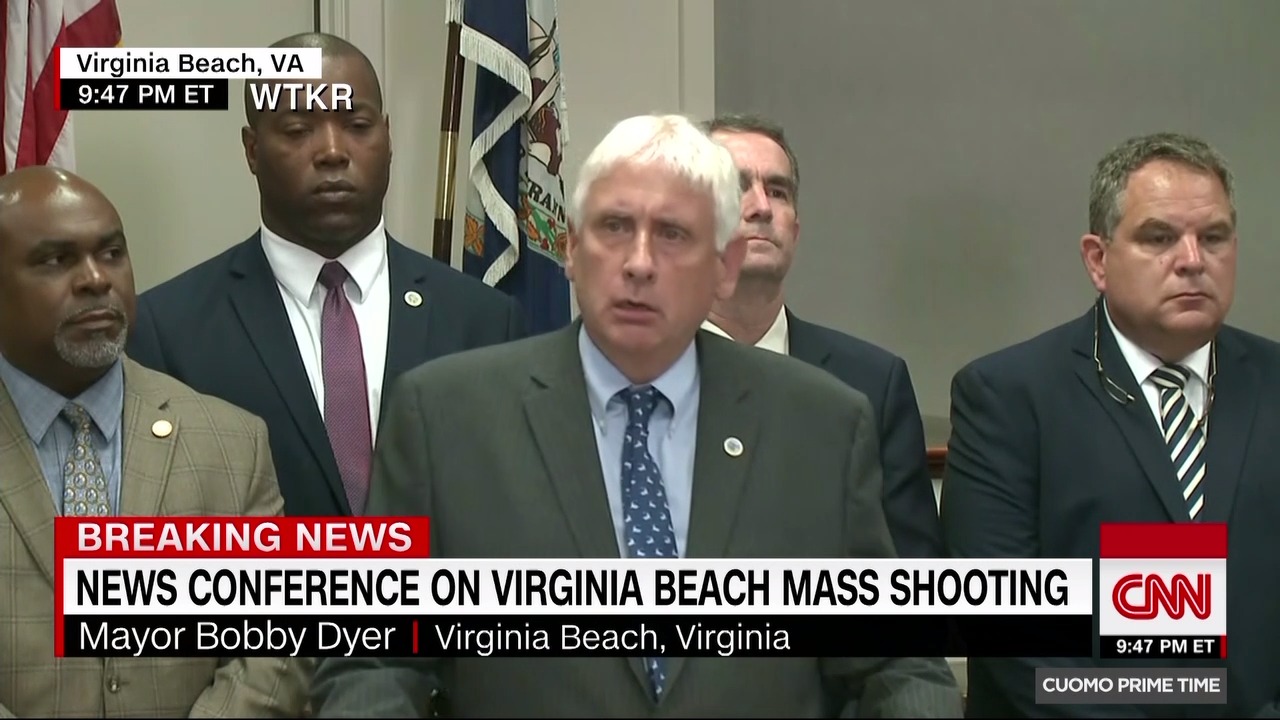 "A senseless crime happened and imposed tremendous grief upon the people of Virginia Beach, the commonwealth and this country," he said.

Dyer vowed that the community would come together and "show that Virginia Beach is a city of resolve and dedication."

"When we get through the shock of it all and we get through the details that we must go through over the next day or two, I believe that our community, Virginia Beach, along with our neighbors and our other cities and Hampton Roads and our commonwealth and our country will be there for not only the families because that's when they're going to need us going forward, but we're going to show that Virginia Beach is a city of resolve and dedication and, you know, we are going to be there for all the families, the friends and our community in a big way," he said. 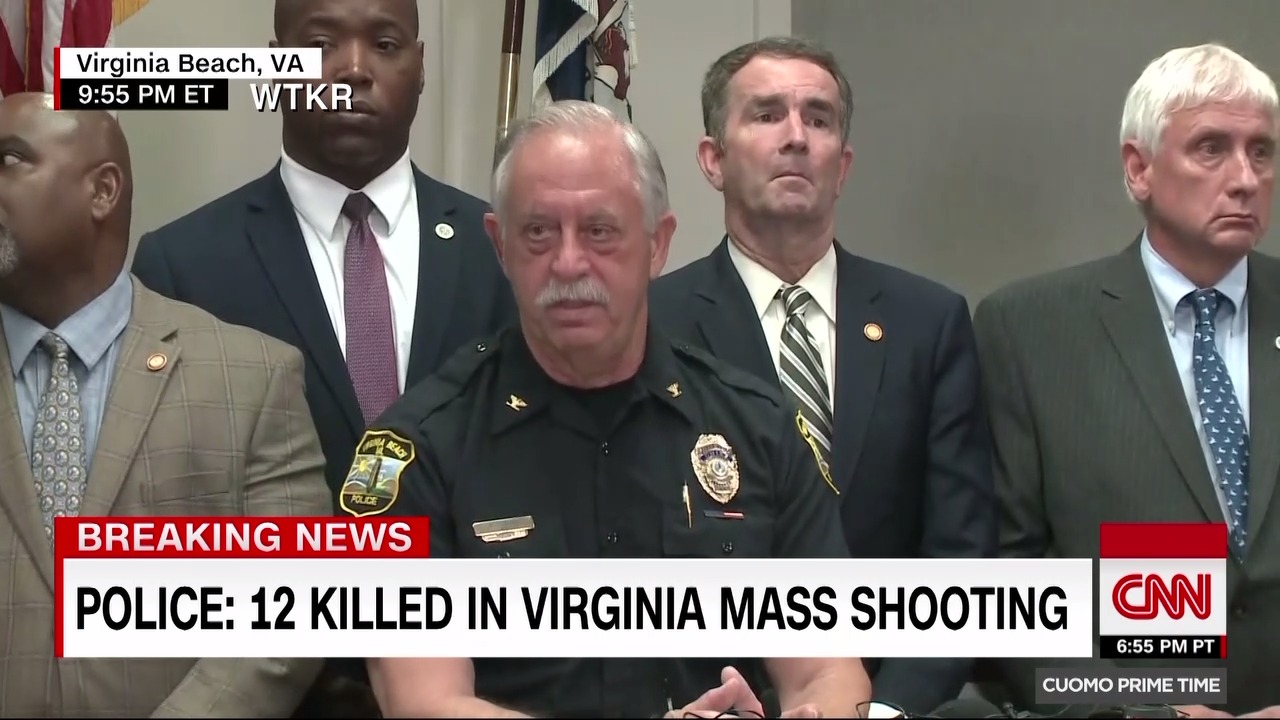 An additional victim died on the way to the hospital, he said at a news conference tonight. Four victims are currently being treated at area hospitals, the chief said.

Cervera said they also have "reports that others may have self-transported so as we get more information on that, we will begin to release it."

The victims, he said, were found on all three floors of the building, and one victim was found in a vehicle outside.

The Virginia Beach Police Department will soon hold a news conference about the deadly shooting at the municipal building.

Alyssa Andrews was with her 1-year-old grandson when she took a photo of a man with a bloodied shirt outside the municipal building in Virginia Beach.

The man's identity and his condition were not immediately known.

She told CNN's John Berman she was sitting in her car waiting for her daughter and was "so afraid."

"I couldn't believe it was happening. I was so afraid because they were circling the building. And I just — I didn't know what to do," she said.