At least 5 killed after SUV plows into Wisconsin holiday parade

Our live coverage of this story has ended for the day. Read the latest here.

Children’s Wisconsin, a pediatric hospital in Milwaukee, told CNN that 18 patients were taken to their facility following Sunday’s Christmas parade incident in Waukesha.

CNN had reported earlier that 15 patients were being treated at that hospital, with no fatalities as of Sunday night.

The hospital will hold a news conference at 12 p.m. ET to share information on how they are continuing to treat the children who were injured.

The Wisconsin Department of Health Services urged anyone experiencing emotional distress after the deadly crash at the Waukesha Christmas parade to call or text the Disaster Distress Helpline.

The national helpline is powered by the US's Department of Health and Human Services' Substance Abuse and Mental Health Services Administration.

"This toll-free, multilingual, and confidential crisis support service is available to all residents in the United States and its territories. Stress, anxiety, and other depression-like symptoms are common reactions after a disaster," the administration says.

At least five people were killed and more than 40 others were injured when an SUV ran into crowds gathered for a holiday parade in Waukesha, Wisconsin, Sunday evening.

Parts of the city are closed today as officials continue the investigation into the incident in downtown Waukesha. City Hall is closed to the public today, although media will be allowed in for news conferences.

Additionally, the School District of Waukesha canceled classes on Monday, according to the school district, and will determine if classes will resume Tuesday.

"The District will have additional counselors available during the school day at all buildings for all students that may be in need of support services," school officials said in a statement.

The Milwaukee Dancing Grannies posted a statement on Facebook Monday, saying members of the group were among the dead in Sunday's tragedy in Waukesha, Wisconsin.

"Those who died were extremely passionate Grannies," according to the group's statement.

At least five people were killed and more than 40 were injured after a red SUV sped into the Waukesha Christmas Parade Sunday afternoon.

Authorities have not released any details on the identities of the victims.

The Milwaukee Dancing Grannies are listed in the parade lineup on the city's website.

Their statement did not mention how many members of the group were affected or injured in the incident.

The group goes on to say they "are devasted (sic) by this terrible tradegy (sic) with of loss of life and injuries in the Waukesha Christmas parade."

"Our group was doing what they loved, performing in front of crowds in a parade putting smiles on faces of all ages, filling them with joy and happiness."

“Our hearts are heavy at this most difficult time, as more information and updates become available it will be posted. Please keep them their families, friends, the Milwaukee Dancing Grannies and everyone who lives have forever changed in your thoughts and prayer,” the statement added.

A person of interest is in custody, according to authorities, and an investigation into the incident is ongoing.

At least five people were killed and more than 40 were injured when an SUV plowed into a Christmas parade Sunday in Waukesha, Wisconsin, city officials said.

Crowds were bundled up along Waukesha's Main Street to enjoy the parade when a red SUV drove through a series of barricades and barreled onto the parade route around 4:39 p.m. local time, Waukesha Police Chief Daniel Thompson said.

Roads in the area will remain closed for at least 24 hours, Thompson added. Businesses along road where the incident took place should remain closed Monday, city officials said.

Here's a look at the route the parade was on when the crash happened: 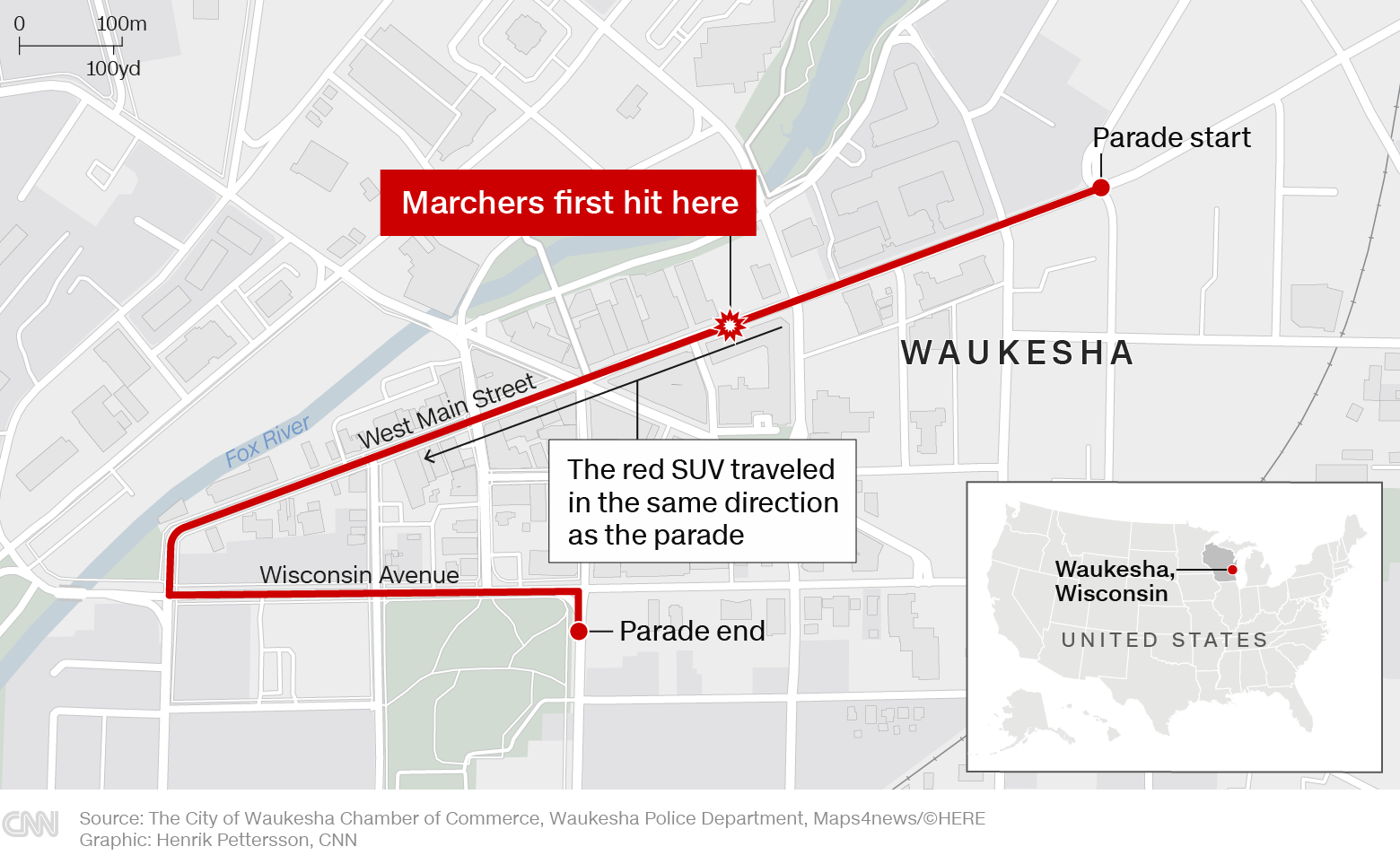 Wisconsin Gov. Tony Evers ordered all flags be flown at half-staff across the state to honor those who were killed and injured at Waukesha’s Christmas parade on Sunday, according to a statement released by the governor’s office Monday.

At least five people were killed and more than 40 were injured when a red SUV plowed into Waukesha’s Christmas parade Sunday night, CNN previously reported.

“As community members gathered to celebrate this holiday season with friends, family and neighbors, a driver broke through barricades and struck many adults and children at the 2021 Waukesha Christmas parade,” the statement said.

“While much is still unknown, including the full extent of injuries and the number of lives lost” the statement added, “the people of Wisconsin pray for the Waukesha community and all those affected, and mourn the loss of life that occurred as a result of this senseless tragedy.”

The celebratory sounds of a Wisconsin Christmas parade were interrupted by terrified screams Sunday after a vehicle plowed into people gathered for the event in Waukesha, a city about 20 miles west of downtown Milwaukee.

At least five people were killed and more than 40 were injured in the chaos, city official said.

Here's what we know about how the incident unfolded: Crowds were bundled up along Waukesha's Main Street to enjoy the parade when a red SUV drove through a series of barricades and barreled onto the parade route around 4:39 p.m. local time, Waukesha Police Chief Daniel Thompson said.

A video of the parade recorded by Angela O'Boyle, who was watching from her fifth-floor apartment balcony, shows the SUV hitting a person in a marching band. The vehicle then continues forward, hitting and running over others in the band and crowd before driving away. In the video, people can be heard screaming and seen running for safety as the SUV continues its path through the crowd.

Video of the parade published on the city's Facebook page shows a red SUV driving quickly through the parade, followed by a running police officer.

A Waukesha police officer discharged their weapon in an attempt to stop the driver, Thompson said. No bystanders were struck by the officer's gunfire, the chief added, noting that he doesn't believe any shots were fired from the SUV.

A vehicle was recovered and a "person of interest" was taken into custody, Thompson said. "The scene is now safe," the chief said Sunday evening.

Where the investigation stands: Thompson would not say whether the person in custody was the driver of the SUV or if any arrests have been made. It is unknown at this time whether the incident was an act of terrorism, he added.

Roads in the area will remain closed for at least 24 hours, Thompson said. Businesses along road where the incident took place should remain closed Monday, city officials said.

The indications are the Waukesha suspect was fleeing another incident when he drove into the parade route, according to multiple law enforcement sources familiar with the preliminary investigation findings.

While early in the investigation, there is no known connection to international or domestic terrorism, and it does not appear to be connected to the Kenosha verdict, the sources said.

Angelito Tenorio, who is running for Wisconsin state treasurer, was campaigning at the Christmas parade in Waukesha, Wisconsin, and had just finished marching the route, when an SUV plowed through the crowd, killing at least five people and injuring more than 40.

"It was absolutely chaotic. It was horrifying," he told CNN. "Nobody knew if this was an attack or if this was an accident or if it was deliberate attack on the people of the parade. People just started fleeing, running away from the scene, leaving behind their belongings, grabbing their children, calling, screaming, looking for their loved ones. And when the crowd cleared out, that's when it looked like I saw people, who appeared to be lying in the middle of the street, lying still, lying lifeless."

"The last thing I heard was the band music, and then I heard the vehicle, almost the engine revving, speeding up. It sounded like the driver was putting pedal to the metal, speeding along the route. I just heard a loud bang and screams and cries."

Right before the incident, Tenorio said he remembered thinking how "impressive the turnout was in terms of participants and attendants."

"Especially after last year's parade being canceled due to Covid, people wanted to gather together and begin the celebration going into the holidays," he said Monday.

There was security present at the parade and different streets were blocked with barricades. Tenorio said, adding that it may have played a role in quick response to the incident.