As we learn of the secret arrangement between the US and Taliban to escort Americans to Kabul airport, we’re also finding out about ongoing talks between the militant group and UK officials. Representatives are holding discussions over securing safe passage out of Afghanistan for British and Afghan nationals still in the country.

A Downing Street spokesperson told CNN that a special representative for British Prime Minister Boris Johnson was involved in talks with senior Taliban representatives in Doha on Tuesday.

“The Prime Minister’s Special Representative Simon Gass has travelled to Doha and is meeting with senior Taliban representatives to underline the importance of safe passage out of Afghanistan for British nationals, and those Afghans who have worked with us over the past twenty years," the Downing Street spokesperson said.

For background: In 2019, Gass was appointed Chair of the UK's Joint Intelligence Committee, which provides ministers and senior government officials with intelligence assessments, primarily about security, defense and foreign affairs. Gass previously served as NATO’s Senior Civilian Representative to Afghanistan.

Hours after the last US troops left Afghan soil, the Taliban said it wanted to maintain good diplomatic relations with the world.

In the UK later Wednesday, UK Foreign Secretary Dominic Raab is due to face lawmakers over his handling of the country's withdrawal from Afghanistan.

The Japanese government has said it is going to continue communicating with the Taliban and it is willing to cooperate with the group to help those who wish to leave Afghanistan.

“Long term and continuous humanitarian support will become necessary. As well as closely watching the situation in Afghanistan in the future, we’d like to work on humanitarian support by coordinating with related countries," Japanese Foreign Minister Toshimitsu Motegi said during a presser on Tuesday.

The country's mission to evacuate Japanese nationals and others from Afghanistan amid a worsening security situation has concluded, Defense Minister Nobuo Kishi announced Tuesday.

However, the government says more than 500 Afghans hoping to leave are still in the country, according to broadcaster NHK.

“The Japanese government will work with countries like the US to ensure the safety of other Japanese nationals, local staffers and those who helped Japan. If they wish to leave Afghanistan for legitimate reasons, we are willing to help them”, Japanese Prime Minister Yoshihide Suga said during a press conference on Wednesday.

The Japanese Embassy in Afghanistan is temporary closed and has been moved to Istanbul, Turkey.

For the first time in nearly two decades, on Tuesday the sun rose over Afghanistan and there were no US troops on the ground.

Biden's address: President Biden on Tuesday vigorously defended the decision to withdraw US troops from Afghanistan and end the war there, the longest in US history. Biden argued the US "no longer had a clear purpose in an open-ended mission in Afghanistan" and that the US' withdrawal signaled "ending an era of major military operations to remake other countries."

As of Monday, more than 122,000 people had been airlifted from Hamid Karzai International Airport in Kabul since July, Pentagon spokesman John Kirby told reporters. The total includes 5,400 Americans.

The US withdrawal was rocked by the Taliban's unexpectedly swift takeover of Afghanistan's capital, but Biden painted the withdrawal as an "extraordinary success."

A covert deal: The US military negotiated a secret arrangement with the Taliban that resulted in members of the Islamist group escorting Americans to the gates of Kabul airport as they sought to escape Afghanistan, according to two defense officials. One of the officials also revealed that US special operations forces set up a “secret gate” at the airport and established “call centers” to guide Americans through the evacuation process.

"It worked, it worked beautifully," one official said of the arrangement.

Americans still in Afghanistan: The President said the US government believes there are about 100 to 200 Americans remaining in Afghanistan, "with some intention to leave." Most of those that remained are dual citizens and longtime residents that had decided to remain in Afghanistan because of "family roots," Biden said.

Biden said the US is committed to getting those Americans who want to leave out and that Secretary of State Antony Blinken is leading diplomatic efforts to do so.

A murky future: What comes next for Afghanistan and the Taliban's efforts to govern the country remains unclear. The United Nations committed to staying in the country to stand "shoulder to shoulder with the Afghan people." UN Secretary-General António Guterres warned that "a humanitarian catastrophe looms" as "almost half of the population of Afghanistan — 18 million people — need humanitarian assistance to survive."

President Joe Biden may have ended the "forever war" but the dangerous loose ends he left behind in Afghanistan could still thwart his attempt to throw everything at his top priority domestic goals.

In a quintessential example of an approach that might be termed "Americans First," Biden will pivot from the country's longest war to rebuilding a nation under siege at home from a new Covid-19 assault and severe weather, as more than a million people wilt without power after Hurricane Ida. The President is also eager to get on with selling a multitrillion-dollar infrastructure and social spending proposal that would rebalance the economy toward workers but still faces a complicated path through Congress.

But the messy end to the Afghan conflict, the Americans left behind when the US airlift ended and the geopolitical and national security implications of an anarchic failed state teeming with radicals mean that moving on will be far more complicated than declaring the two-decades-long conflict over.

Biden attempted to draw a firm line under the chaos, recriminations and tragedy of the last two weeks on Tuesday, defiantly defending his handling of a final US withdrawal that exposed him to searing criticism, especially after the deaths of 13 US service personnel in desperate scenes outside Kabul's airport.

He attempted to shift the focus from the questionable decision-making of the pullout to the broader point that he had ended a war that his three predecessors could not, despite indications that the US project was always going to fail. 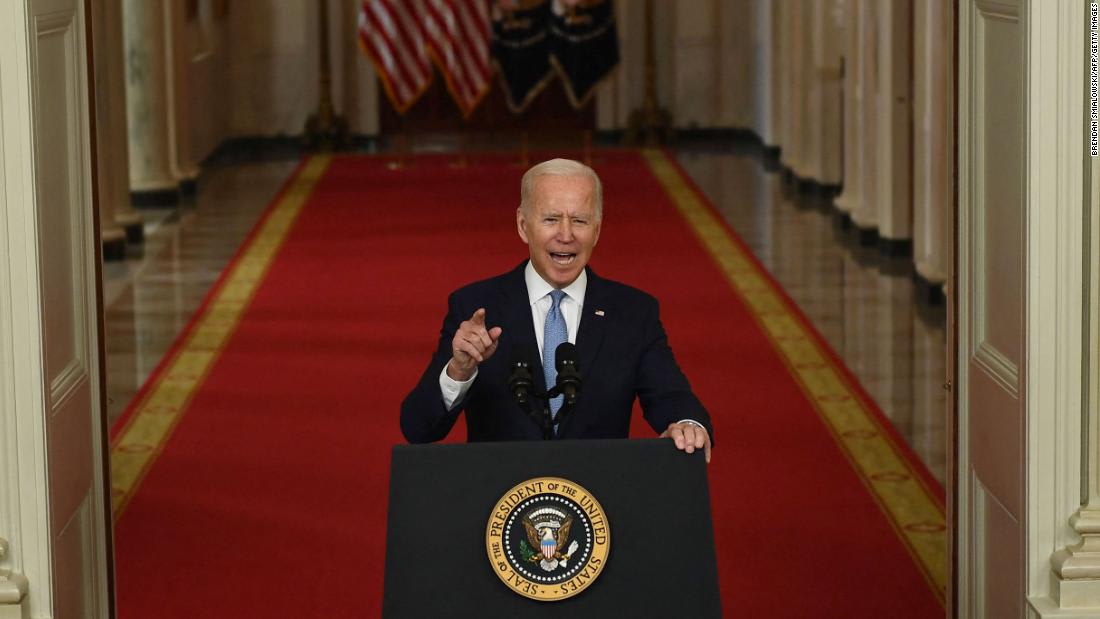 Analysis: Biden turns to nation building at home, but the political threats he left behind in Afghanistan could come back to haunt him 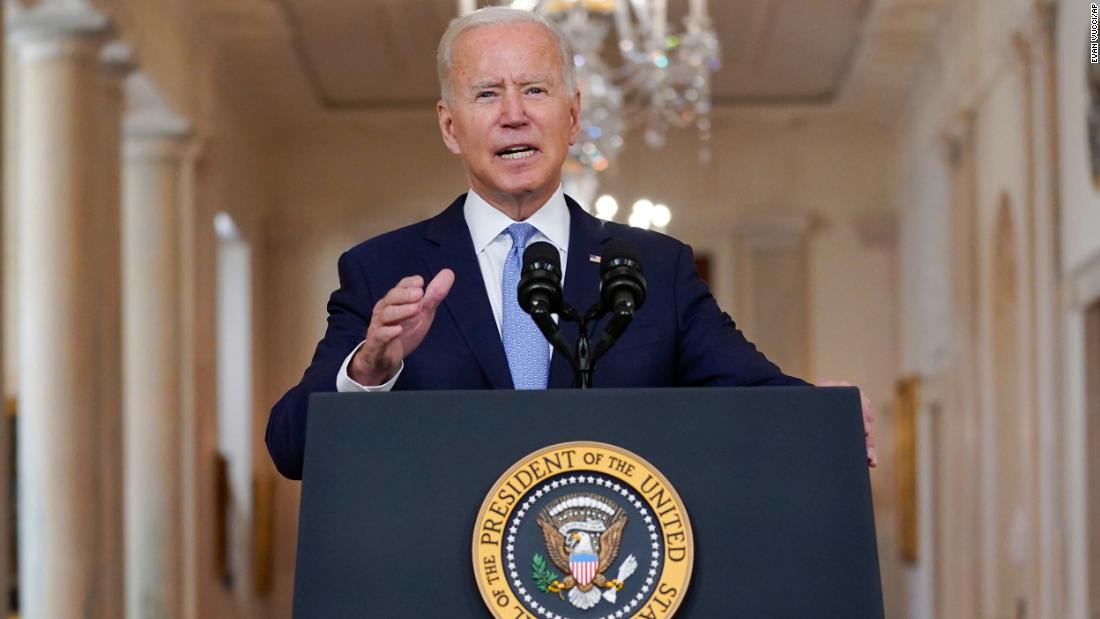 President Joe Biden on Tuesday offered a vigorous defense of his decision to withdraw US troops from Afghanistan, defending the chaotic withdrawal from Kabul a day after the last American military planes left the country, marking the conclusion of the US' longest war nearly 20 years after it began.

"My fellow Americans, the war in Afghanistan is now over," Biden said at the White House, marking a symbolic moment he said was long overdue. "I'm the fourth president who has faced the issue of whether and when to end this war. When I was running for president, I made a commitment to the American people that I would end this war. Today I've honored that commitment."

Biden was defending a decision that has drawn scrutiny for its chaotic execution that undercut his promise to restore competence to government. His speech, delivered in an impassioned tone that revealed flashes of anger toward his critics, offered no apology for how the war ended.

Instead, Biden said the real choice in Afghanistan was "between leaving and escalating," framing his call to withdraw troops as the only option aside from surging more forces to the country. He suggested that the humbling end to the war, with the Taliban back in control after trillions of dollars and thousands of lives were spent ousting them, was the fault of decisions made long ago.

"I was not going to extend this forever war, and I was not extending a forever exit," he said, casting aside arguments that leaving some troops in the country was a feasible way to keep the Taliban at bay.

Eager to move on, Biden hopes his speech amounts to something of the last word after a two-and-a-half week scramble to leave the country. Questions linger over potentially hundreds of Americans who were not evacuated and many more Afghan allies who want to leave. 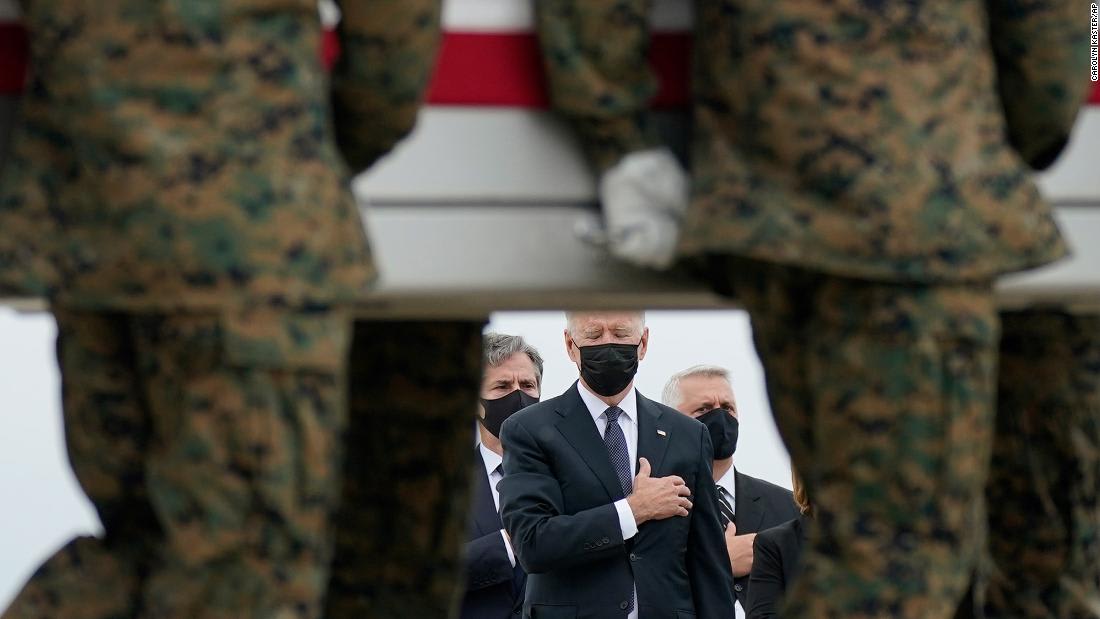 Biden set to address the nation following US withdrawal from Afghanistan