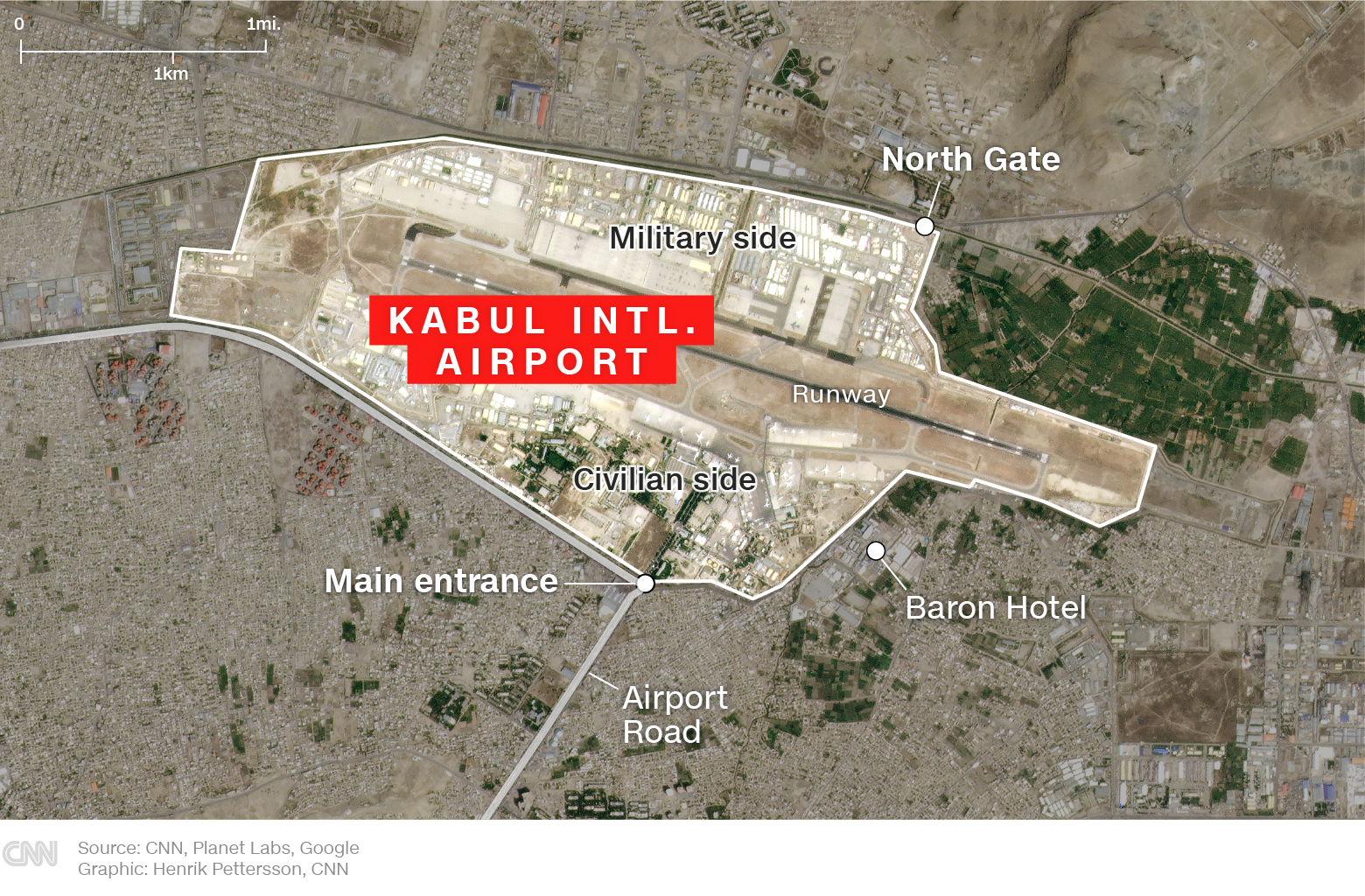 Kirby tweeted, “We can confirm an explosion outside Kabul airport. Casualties are unclear at this time. We will provide additional details when we can.”

According to one US official, there are injuries among Afghans, but there is no information yet on any US casualties.

CNN's Barbara Starr noted that the situation continues to develop, and there are still few answers on what occurred.

The Polish evacuation effort in Afghanistan will end Thursday, according to a statement from Polish Prime Minister Mateusz Morawiecki.

The statement posted on Twitter announced that the "evacuation operation for Poles and Polish associates" ends Thursday.

According to Morawiecki the Polish evacuation operation began in June "when the situation in Poland began to deteriorate."

The prime minister added that Poland "will provide support on Polish territory to all evacuees from Afghanistan."

A further tweet from the Chancellery of the Prime Minister of Poland said that "thanks to diplomatic and coordination actions" Poland had "managed to help 937 people."

At least 356 children were included amongst the 937 people, the Chancellery said, adding that a total of 14 flights had departed from Afghanistan to Poland.

"We helped our allies to evacuate partners from Lithuania, Estonia and the International Monetary Fund," it said.

The top US diplomat in Afghanistan on Thursday acknowledged that “there undoubtedly will be people in this country who would like to get out who will be unable to” as US evacuation efforts draw to a close.

Amb. Ross Wilson said the United States and other nations were working to try to make sure that Afghans who want to leave the country after Aug. 31 are permitted to do so by the Taliban, but he did not offer any guarantees.

Speaking about the evacuation efforts so far, Wilson said, “our primary focus, I'll be direct on this, has been American citizens.”

“That's the charge from President Biden and that's what we've been working on most aggressively,” he said on ABC’s “Good Morning America.”

“Each of those presents big challenges. Our effort is focused on getting the most, the most in those categories that we possibly can out, with special attention to American citizens,” he said.

Secretary of State Antony Blinken said Wednesday that there were as many as 1,500 US citizens who may be seeking to leave Afghanistan. There are tens of thousands of other vulnerable Afghans who are likely to be left behind once US evacuation efforts end.

The top US diplomat in Kabul, Amb. Ross Wilson, said Thursday that he could not get into the specifics of the security threat outside the gates of the Kabul airport cited in an embassy alert, but noted that “it was clearly regarded as credible, as imminent, as compelling."

“Our intention was to urge Americans and frankly others not to come to the airport,” Wilson said in an interview on ABC’s “Good Morning America” Thursday.

“For American citizens in particular, we are working other ways, on an individualized basis, to assist them in getting to the airport in a safe and secure manner,” he said.

“Being part of these huge crowds that remain around the gates, entrances to the airport, is dangerous. We're obviously concerned about our own people as well,” Wilson said.

The US Embassy in Kabul on Wednesday evening ET time advised US citizens at a number of gates at the airport to “leave immediately,” noting “security threats outside the gates.”

The alert came as the administration has raised alarm about the potential of an attack by ISIS-K. ISIS-Khorasan is a branch of the terror group that first emerged in Syria and Iraq. While the affiliates share an ideology and tactics, the depth of their relationship with regards to organization and command and control has never been entirely established.

The US believes ISIS-K, which is a sworn enemy of the Taliban, wants to create mayhem at the airport and has intelligence streams suggesting it is capable and planning to carry out multiple attacks, according to the official.

Eyre says the United States told him this was "the largest military evacuation in history."

The US and other NATO nations are still racing to evacuate their citizens from the country.

President Biden has said he is so far sticking to his Tuesday deadline for the final exit of US troops.

The latest 24-hour period evacuation numbers from the White House show a slowing pace as the airlift effort enters what is expected to be its final days.

Here's a look at what else we know about key figures and how the Taliban's power structure functions: 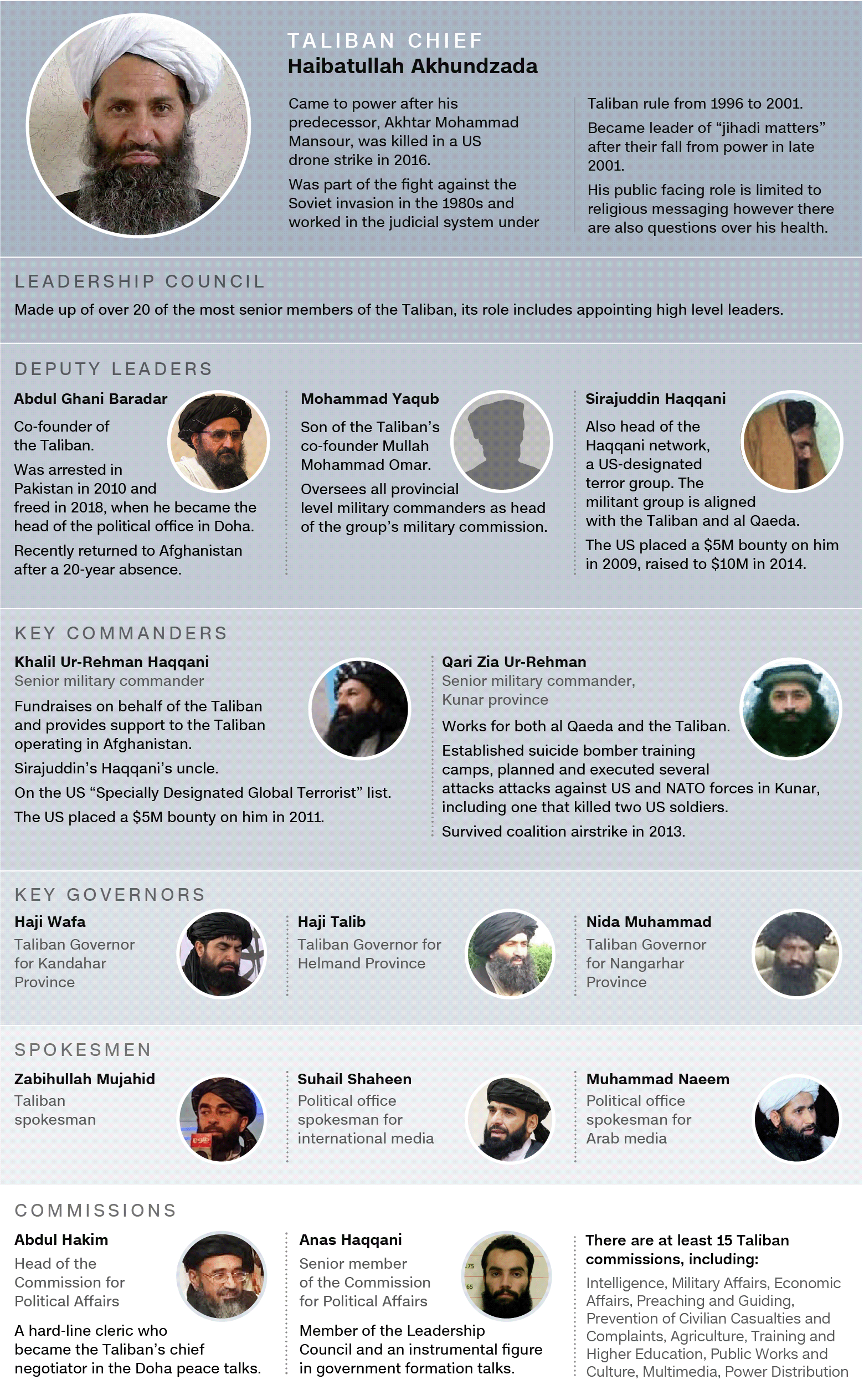 Traffic on the Chaman border crossing with Afghanistan in Pakistan’s southwestern province of Balochistan has “increased significantly” since the fall of Kabul, border officials tell CNN.

"About 18,000 people are now crossing the border on a daily basis," Hameed Ullah, the head of the Coronavirus Health team at the Chaman border told CNN.

In the past, no more than 12,000 people typically crossed the border in a single day, the official told CNN.

Abdullah Khan, a resident of a Chaman town, told CNN that he often visits the Pakistan-Afghan border, he said there is a “situation of tension at the Chaman border” at the moment and “thousands of people” are coming to Pakistan side of the border.

The border crossing is “over occupied” right now with people fleeing Afghanistan, he said.

A grave and specific ISIS-K terror threat is hanging over the frantic endgame of the US withdrawal from Afghanistan, with time fast running out to rescue Americans and the fate of fleeing Afghans looking darker by the hour.

ISIS-Khorasan is a branch of the terror group that first emerged in Syria and Iraq. While the affiliates share an ideology and tactics, the depth of their relationship with regards to organization and command and control has never been entirely established.

US intelligence officials previously told CNN the ISIS-K membership includes "a small number of veteran jihadists from Syria and other foreign terrorist fighters," saying that the US had identified 10 to 15 of their top operatives in Afghanistan. The group's name comes from its terminology for the area that includes Afghanistan and Pakistan: "Khorasan."

The US Defense Department Inspector-General for Afghanistan (SIGAR) said in a report covering the months April to June of this year that "ISIS-Khorasan exploited the political instability and rise in violence during the quarter by attacking minority sectarian targets and infrastructure to spread fear and highlight the Afghan government's inability to provide adequate security."

ISIS-K has formed cells in Kabul which have carried out a number of devastating suicide attacks in and beyond the Afghan capital since 2016.

The group has built up a presence in eastern Afghanistan in recent years, especially in the provinces of Nangahar and Kunar. Last August, the group attacked the main prison in Jalalabad, the capital of Nangahar, in an effort to free dozens of their supporters who had been captured by the Afghan army and police.

Read more about the group here.

President Joe Biden will be holding a virtual meeting Thursday with a bipartisan group of governors "who have raised their hands to temporarily house or resettle vulnerable Afghans."

What we know: With less than a week to go before the Aug. 31 withdrawal deadline, US evacuation efforts are ramping up in Afghanistan.

The US military increased flights out of Kabul yesterday to one every 39 minutes, the Pentagon says.