Our live coverage of the situation in Afghanistan has moved here.

The embassy said the Airbus A400M military transport then took off on an evacuation flight carrying French nationals.

"France is implementing the necessary means to ensure the protection of our compatriots. It will continue to stand with the Afghan people," the embassy said in a tweet Tuesday.

The Taliban have given a stamped statement to the UN Refugee Agency (UNHCR,) which reassures that the organization can continue their humanitarian and relief efforts in the country, said Aurvasi Patel, the acting director of UNHCR's regional bureau for Asia and Pacific.

"We have not experienced before. This is the first time," Patel said Tuesday.

"If this actually materializes, then we can certainly stay and deliver and provide humanitarian assistance, which is critical for Afghans today," she told CNN.

As the crisis intensifies, Afghans remain "terrified" despite the Taliban's reassurances and statements, urging people to trust them.

"The Afghans are terrified by the history and the fact that the Taliban have a past record on what they have done to the citizens," Patel said.

"Right now, they have given assurances. But, there have been reports of some of their actions that go against their current narrative. So, I think it is important that the Taliban actually do what they say, and reassure the people — not only in word, but in practice — to help to the civilians to understand that they want to have a state of Afghanistan."

The top American diplomat in Afghanistan said he is still in the country and, along with his staff, helping US citizens and vulnerable Afghans.

"Our commitment to the Afghan people endures," said Ambassador Ross Wilson, the current US charge d'affaires in Kabul.

On Sunday, State Department spokesman Ned Price said that embassy personnel had relocated to Hamid Karzai International Airport in Kabul under the protection of the US military.

Robert Crews, a historian at Stanford University specializing in Afghanistan and central Asia, said he believes the Trump administration's deal with the Taliban last year played a role in the group's takeover of the country.

The agreement struck last year laid out a 14-month timetable for the withdrawal of "all military forces of the United States, its allies and coalition partners." The US agreed to withdraw troops and release some 5,000 Taliban prisoners, while the Taliban agreed to take steps to prevent any group or individual, including al Qaeda, from using Afghanistan to threaten the security of the US or its allies.

Crews told CNN's John Vause that the accord "legitimized the Taliban" and gave them a "road map" to conduct their offensive and oust the democratically elected government.

Crews said the question going forward is can the Taliban establish their so-called "Islamic emirate" in a society that has dramatically changed in the two decades since they were last in charge.

"There is potential for Afghan society to push back against the Taliban once this initial shock is over, and once the Taliban figure out how they will attempt to implement in the 1990s," Crews said. "The Biden administration has painted us all, Afghans in particular, into a corner, where they have no good choices, and they find themselves at the mercy of this movement over which no one except Pakistan has substantive leverage over now."

Australia will allow Afghan nationals in the country on temporary visas to remain indefinitely in light of the Taliban's takeover of the country.

“They'll be able to remain … under the visas they're currently on,” Prime Minister Scott Morrison said Tuesday in Canberra, the capital.

Morrison said he was “optimistic” about a current Australian Defence Force operation to Kabul that is seeking to repatriate 130 citizens as well as Afghan nationals who worked with Australians through the war.

But the Prime Minister said the mission could not rescue all those who have worked for Australia.

“I know that support won't reach all that it should. On the ground events have overtaken many efforts. We wish it were different,” Morrison said.

Since April Australia has settled 430 Afghan “locally engaged employees” as well as their families, the Immigration Department announced Tuesday.

India’s Ministry of Home Affairs said it will introduce a new emergency e-visa to fast-track visa applications for people coming from Afghanistan, which is home to small Hindu and Sikh communities.

Indian Minister of External Affairs S. Jaishankar said late Monday that his office was "in constant touch with the Sikh and Hindu community leaders in Kabul.

"Their welfare will get our priority attention,” he said.

Afghanistan is home to Sikh and Hindu communities and holy sites for both religions. The Gurdwara (Sikh temple of worship) Chisma Sahib in Jalalabad is considered sacred as Sikhs believe Guru Nanak, the founder of their religion, visited the region in the 15th century. In Kabul, the Asamai temple is located on a hill named after Asha, the Hindu goddess of hope.

The country used to be home to large Sikh and Hindu communities. There were about 220,000 of them living in Afghanistan in the 1980s, according to Afghanistan's TOLOnews, but most fled the Taliban's religious persecution in the 1990s. By 2016, nearly 99% had fled, according to TOLOnews.

Indian think tank Gateway House estimated in 2020 that only about 300 families of each faith were left in Afghanistan.

The Indian government has prioritized the safety of Hindus and Sikhs in Afghanistan because they are minority groups protected under the country's controversial 2019 Citizenship Amendment Act (CAA).

The law fast-tracks citizenship for religious minorities, including Hindus, Sikhs, Buddhists, Jains, Parsis and Christians, from Afghanistan, Bangladesh and Pakistan -- but not Muslims.

Opponents say the bill is unconstitutional as it bases citizenship on a person’s religion and would further marginalize India’s 200-million strong Muslim community.The government, ruled by the Hindu nationalist Bharatiya Janata Party (BJP), said the bill seeks to protect religious minorities who fled persecution in their home countries.

Embassy closing and staff evacuating: India's External Affairs Ministry said it will close its embassy in Kabul and relocate its ambassador and diplomatic staff back to India “immediately” due to the situation in Afghanistan.

Instantly iconic imagery now bookends the lost war in Afghanistan, telling a poignant tale of a just venture born out of national tragedy ending in a chaotic US retreat on President Joe Biden's watch.

On September 14, 2001, President George W. Bush stood on a twisted concrete pyre at Ground Zero in New York and vowed through a bullhorn: "The people who knocked down these buildings will hear all of us soon."

On Monday, 19 years and 11 months later, desperate Afghans fleeing the Taliban reinstatement, a decade after the US won its revenge against Osama bin Laden in neighboring Pakistan, clung to a departing US cargo aircraft at Kabul airport. Several apparently fatally fell to earth after takeoff, hauntingly recalling those who leapt to their deaths from the Twin Towers rather than burn in the inferno set off by airliners hijacked by the Taliban's terrorist guests -- al Qaeda -- on September 11, 2001.

The battles, human tragedies and political errors that unfolded between these era-defining moments are culminating in the current defeat and are driving the treacherous crisis politics facing another White House 20 years on. 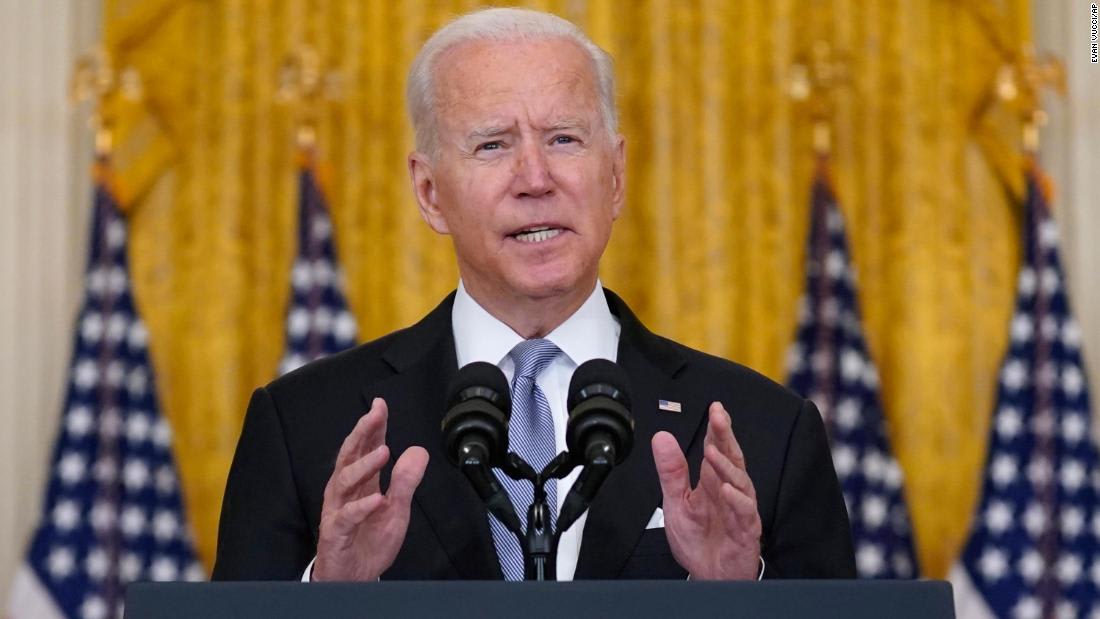 Ronald Neumann, a former US ambassador to Afghanistan and Algeria, spoke to CNN's Don Lemon about the fall of the Afghan government and what he believes the Biden administration must do next.

"We need clear policy," Neumann said. "THere's some big questions that are still unanswered. President Biden spent a lot of time in his speech with his defense of his policies, some which I agree with, some of which I don't, but he was very short on details."

Like hundreds of other Kabul residents, Aisha Ahmad scurried to the Hamid Karzi International Airport on Monday, hoping to catch a flight out of the country as it became apparent the government would fall to the Taliban.

Ahmad did not make it out. On Twitter, she asked for help from a third country, only to receive death threats, she said.

The 22-year-old university student recounted her experience to CNN and explained why she's fearful for the future.

Her experience at the airport: Ahmad said she got a call from a friend in the United States and was told that people were being ferried out of Afghanistan on military flights. She didn't believe it at first, but when a second friend called and said the same thing, she thought they might both be right.

The streets were quiet as she ran to the airport, except for the occasional crackle of gunshots. People were calm and looked curious.

But at the airport, Ahmad said "there were thousands of people, including many without passports and little security. She got stuck.

"The crowds were pushed by police," she said. "Kids and women were on the ground."

"I thought at one point that this is the end and I will die," she said.

Though she did not manage to make it out of Kabul, she escaped the airport with only scrapes and bruises.

Will she go back to school: Taliban spokesman and leaders have said that they plan to run an "inclusive Islamic government" and allow women and girls to go to school. Many Afghans are deeply skeptical of those claims because it's a major departure from the fundamentalist, totalitarian tendencies that marked the group's time in power in the 1990s.

"Some people say the Taliban have changed, others say that they have not," Ahmad said. "To be honest now I do not believe the Taliban."

Taliban leaders have said that people should continue to go about their day-to-day lives for now, including women who go to school. Ahmad said based on what she sees on TV, she thinks she can go back to school but isn't exactly sure.

"Definitely there will be restrictions for women, but we do not know how much," Ahmad said.

"People are not much outside, and they do not know how their daily activity will be when life is back to normal. Will they force stores to close during prayer time? Will there be punishment for not going to the mosque, will they force people to go? ... No one knows," she said.