Turkish President Recep Tayyip Erdogan has called on other European countries to take responsibility for the Afghans fleeing the Taliban, warning Turkey has no obligation to be “Europe's refugee warehouse.”

“Europe, which has become the center of attraction for millions of people, cannot stay out of this problem by closing its borders just to protect the welfare of its citizens. With this attitude, Europe is turning its back on human values,” Erdogan said at a televised press briefing on Thursday.

He said about half of the “irregular” migrants Turkey has registered in the past three years are from Afghanistan.

The President said “if necessary” Turkey would be open to meeting with the “government to be formed by the Taliban.”

Around 500 Turkish citizens were evacuated from Afghanistan recently, and about 300 more who are still stuck there will be brought home soon, he added.

Two photographs of President Joe Biden this week neatly illustrated the White House's fight to contain the fallout of the biggest crisis of his presidency.

In the first, he sat alone at Camp David, staring upwards at a bank of video monitors surrounded by 18 empty leather chairs. Even some White House officials wondered whether the imagery, including him in a polo shirt, was helpful.

Three days later, when Biden was back at the White House, the picture was much different. He sat in suit and tie at the head of the Situation Room conference table, mask hanging off one ear as he scowled toward the assembled members of his national security team. The same team assembled a day later to "manage efforts in Afghanistan," the White House said.

Biden has found himself caught this week in some of the most dire days of his seven-month-old presidency, accused of badly botching the end of America's longest war even by some of his most reliable allies at home and abroad.

The White House has scrambled to explain the chaos in Afghanistan through briefings, speeches and interviews -- even as Biden himself remains defiant in his decision and insists the American people are behind him.

So far, the President's reflexive response to the crisis to deflect blame and reject criticism has done little to quiet the questions swirling about whether he properly prepared for the Taliban's takeover. It has tarnished what had been a carefully-honed image of competence, and Biden's own explanations for what happened -- that the chaos was inevitable and the Afghan army was to blame -- belie the empathy that is his chief political characteristic. 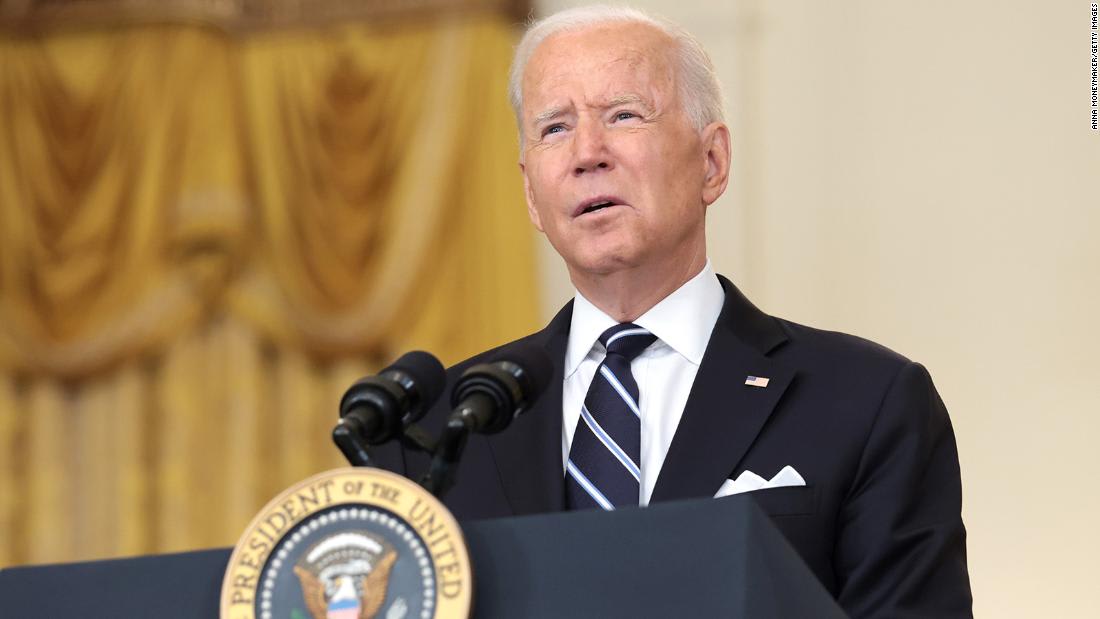 As White House scrambles on Afghanistan, Biden faces some of most dire days of his presidency

According to Ebrard, the country’s ambassador in Iran has begun helping process the applications of Afghan citizens, especially women and girls.

The minister did not provide more details on how many Afghan refugees the Mexican government is planning to take.

A group of US diplomats wrote a classified cable to Secretary of State Antony Blinken in mid-July, warning that swift action needed to be taken because they believed the situation in Afghanistan could rapidly deteriorate and they feared a catastrophe.

They laid out how the department should act quickly to process and evacuate Afghans who had assisted the United States and get them out of the country quickly.

The diplomats decided to send the dissent memo because they felt previous warnings and recommendations they had made were being ignored and labeled alarmist, two State Department officials told CNN.

The classified cable, signed by more than a dozen US diplomats, urged specific steps to be taken, including starting a biometric enrolment program for the Afghans applying for Special Immigrant Visas (SIV) or refugee status ahead of the evacuation, so they wouldn't waste time before what they believed would be the imminent collapse of the Afghan government as the US withdrew.

The State Department responded to the cable within days of receiving it and followed through on some of the issues it raised, said a source familiar with the matter. But not all of the recommendations in the memo were quickly implemented, the diplomats said.

Niloofar Rahmani, the first female fixed-wing air force aviator in Afghanistan, says she has a hard time believing the Taliban will change their mistreatment of women, especially since she remembers growing up under their rule as a child.

"As an Afghan woman, I definitely was a child and I lived under that life, under that government," she said of the Taliban's first rule which ended after the US invaded in 2001. "I have seen my own mother get beat up by the Taliban,"

"For a little girl, that memory never ever goes away," she continued. "I still close my eyes, especially recently when they are creating their own government in Afghanistan, it just takes everything from me. It brings pain to my heart."

She went on to say she has a "hard time believing" they will change their treatment of women, despite the Taliban's promise to form an "inclusive Islamic government."

"It does not make sense to me that people, the government, that they proved themselves in the past, how they can change that way? How is that even possible?" she asked.

Democratic Rep. Jason Crow, who served in Afghanistan, said the US must urgently evacuate its Afghan allies and partners before it's too late.

"The first step is getting them out of Afghanistan," said Crow, noting the many complicated visa issues that seem to be slowing the extrication process.

"None of this matters... if they are dead in two days," he added. "Let's get these folks to a US military installation overseas, a third country and figure out the bureaucracy nightmare that continues to bog this down, and streamline that process. We have to get folks out."

Some context: Crow, who served two combat tours in Afghanistan, was also critical of the Biden administration's withdrawal from the country so far, saying he is receiving constant requests for help from those caught up in the chaos on the ground.

A teenager on Afghanistan's youth national football team was one of the victims who fell from the US military C-17 aircraft on Monday, Afghanistan's General Directorate of Body and Sports confirmed in a statement on social media Thursday morning.

"With great regret and sadness, we obtained information that Zaki Anwari, one of the youth footballers of the national team, has lost his life in a horrible incident," the statement said.

The post continued that young Anwari was "endeavoring to leave the country like hundreds other youth from his country. He has fallen down from the US military plane and lost his life."

One day after the Taliban took control of Afghanistan's capital city Kabul on Sunday, hundreds of people fled to the tarmac at Hamid Karzai International Airport in Kabul on Monday, desperate to find a way to evacuate the country.

As the C-17 aircraft taxied to the runway several people clung to the landing gear as the aircraft gained speed. Video emerged shortly after showing a C-17 ascending over Kabul and at least two bodies falling from the aircraft.

Afghanistan's General Directorate of Body and Sports statement said Anwari was among "several other compatriots who fell to the ground while flying" in search of a "better future in America."

"They died and were martyred," the post said, "may his soul rest in peace and his memory be remembered."

The post included prayers for Anwari to be "granted high position in heaven and pray to God to grant patience for his family, friends and his sports comrades alike."

A total of 12 people have been killed in and around Hamid Karzai International Airport since the Taliban took control of the capital on Sunday, Reuters reported Thursday, citing NATO sources and Taliban officials.

State Department spokesperson Ned Price said the US government does not “have the resources to go beyond the airport compound” and evacuate American citizens at this point.

Asked if the US had approached other nations about assisting with such an effort, Price told reporters, “you will be hard-pressed to find a country that has the capacity on the ground, if any such country exists, in a position to do that.”

“We have been working very closely with our partners on the ground at (Hamid Karzai International Airport), many of them have come to us asking to have their people go out on our planes, for example,” Price said.

Price added: “So, the United States military is undertaking a gargantuan airlift operation right now. That itself is a major undertaking. You've heard from the Secretary person the chairman of the resources that are involved in that. At this point, we don't have the resources to go beyond the airport compound."

There are 6,000 people at the airport in Kabul who have been “fully processed by our consular team and will soon board planes," State Department spokesperson Ned Price said Thursday during a briefing.

Price told reporters that they “are aware of congestion around the airport” and are “working closely with the Department of Defense to facilitate safe and orderly access for consular processing on the airport compound.”

He said flights continued throughout the airport, noting that US citizens and legal permanent residents “will be given the first opportunity to board, with other priority groups filling in seats from there.”

Price said they were continuing to deploy more consular officers, including to Qatar and Kuwait as well as in Kabul.

The spokesperson said later in the briefing that the they expect 20 flights to depart Afghanistan tonight, citing the Defense Department, and noted that the operation “will continue at as fast a clip as we can possibly manage.”