Day 1 of the 2022 Beijing Winter Olympics

Our live coverage has ended for the day. Read up on the latest out of Beijing below.

The first medals have been earned at the Beijing 2022 Winter Olympic Games, and they come in cross-country skiing in women’s skiathlon.

The gold medal in the 15-kilometer race went to Therese Johaug of Norway, her first individual Olympic gold medal in her career, with a time of 44 minutes and 13.7 seconds. Johaug, 33, is competing in her third Olympics, but she missed PyeongChang 2018 because of a positive drug test in 2016. This is her fourth Olympic medal all time and second gold.

American Jessie Diggins, considered a contender for a medal heading into the event, finished sixth.

One of the final torchbearers who lit the cauldron, Dinigeer Yilamujiang of Xinjiang province, was among the starters in this race.

The first medal event of the Olympics has begun, with the cross-country women's 15km skiathlon kicking off at 3:45 p.m. local time (2:45 a.m. ET)

Though other competitions took place earlier today, and even earlier in the week before the Opening Ceremony, those were qualifiers that decided which athletes advance to the finals.

Athletes competing at the Genting Snow Park in China's Zhangjiakou, one of the three "zones" where Olympic sporting events are being held, might see some familiar Chinese motifs as they flip and jump through the air.

Some of the walls in the snow park -- which contains rails and massive jumps for athletes to perform tricks -- are built like the Great Wall of China, with its distinctive stone ridges on the top.

Another structure in the park looks like a traditional Chinese house with a sloped roof and wide eaves, like those commonly seen in Beijing's iconic ancient hutongs -- narrow alleyways that run alongside walled courtyards.

The snow park was designed by German company Schneestern, which wanted to bring some local flavor to the Games, according to state-run media China Daily.

"It's great to have something connected to China and new to the world, which entertains people a little bit more. It's not just about meeting technical requirements, it's also a kind of art," Schneestern CEO Dirk Scheumann told China Daily in 2018, when the snow park was still under development.

China has fired back at Canadian Prime Minister Justin Trudeau over his diplomatic boycott of the Beijing 2022 Winter Olympics.

In a statement Friday, the Embassy of the People's Republic of China in Canada said it had lodged “solemn representations” with Trudeau’s government over its alleged politicization of sport and “violation of the Olympic Charter, in particular the principle of the political neutrality of sport.”

Some context: Ahead of the Olympic opening ceremony on Friday, Trudeau issued a statement promising his “full support” to Canadian athletes, while explaining his reasons for the diplomatic boycott.

“On the international stage, Canada has been a consistently strong voice for protecting and advancing human rights, and we remain extremely concerned by reports of human rights violations in China, including the persecution of Uyghurs,” the statement said.
“As a result, Canada is not sending any diplomatic representation to the 2022 Olympic Winter Games. However, our Team Canada athletes have our full support as they compete on the world stage."

The allegations: Several nations including Canada, Australia and Britain have joined a US-led diplomatic boycott of the Winter Games, pointing to China’s alleged human rights violations of Uyghurs and other Muslim minorities in its north-western region of Xinjiang.

The US State Department estimates that up to two million people have been detained in internment camps in Xinjiang since 2017. China says the camps are vocational training centers, aimed at combating terrorism and separatism, and has repeatedly denied accusations of human rights abuses in the region.

China has denied it: The country has, in recent years, deployed an all-out propaganda effort to shift the narrative in Xinjiang that includes sending state media reporters to the region to supposedly "prove" there is no oppression there and targeting Beijing's critics overseas. 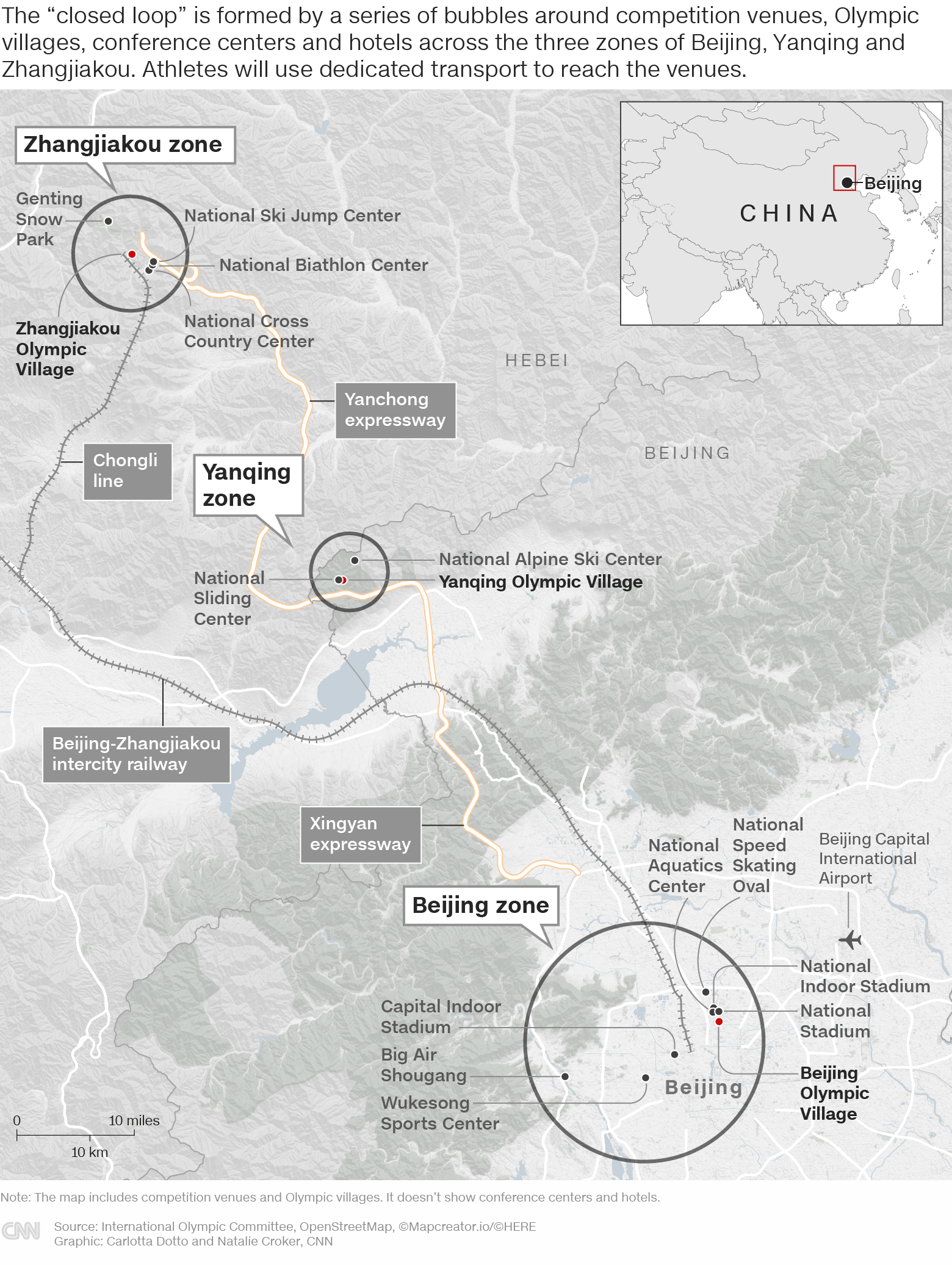 Getting around Beijing’s Olympic closed-loop bubble is not straightforward but traveling 100 miles (160 kilometers) from central Beijing to Zhangjiakou is an experience of its own.

The journey starts with Covid testing right outside my hotel – a daily ritual of life inside the bubble.

My first destination is the main media center, which serves as a hub for the three-dozen bus lines running in central Beijing -- one of three "zones" inside the Olympic closed loop where the sporting events take place.

The media center is the only place I can catch a bus to the train station located in the northwestern suburb of the city.

As the bus drives down the streets of Beijing, it becomes its own mobile mini-bubble, passing local residents going about their daily lives. The front of the bus is completely sealed off behind a thick transparent screen, intended to protect the driver against the spread of the virus.

After arriving at the media center, I wait half an hour for the bus to the Qinghe railway station. Then the drive takes another 20 minutes.

The railway station is split into two parts: one inside the Olympics bubble and one outside. We enter via a special gate for Olympics personnel to our own waiting room, with the main departure hall for local travelers sealed off behind glass walls.

There is no paper train ticket, only a QR code obtained in advance on a phone app. The check-in process is all contactless -- you just scan the code and walk through the gate.

On the platform, even the train itself is divided: carriages 1 to 5 are for those within the bubble, and carriages 6 to 8 are for travelers outside it. A string of barricades prevent us from boarding the wrong carriages.

Inside the train, everything appears brand new. The smell of disinfectant fills the air, pungent even through N-95 masks. Crew members all wear goggles or face shields, in addition to masks.

The train ride itself is very comfortable. As we head northwest, the city landscape gives way to open fields and rural villages, cradled by brown mountains in the distance. We also pass wind turbines and solar panels -- Beijing has claimed the Winter Games are powered 100% by wind and solar energy, mostly transported from Zhangjiakou.

After 50 minutes, we arrive at Taizicheng station in Zhangjiakou. Stepping out of the train, the air is notably colder -- the temperature is about 10 degrees celsius lower than in central Beijing. Parts of the ground are covered in white: it had snowed the previous day, a cleaning worker at the station told me.

But higher up on the mountain, the white ski slopes are made with artificial snow -- and they’re ready for the Games to start.

The Canadian women's ice hockey team has had a strong start to the Olympics, with two victories under their belt already.

They won their first opening match against Switzerland 12-1 and defeated Finland in their next game 11-1.

The Finland women's hockey team had taken bronze at the last Winter Olympics in PyeongChang.

The Canadian women's hockey team has long been a strong contender at the Olympics, winning four straight Olympic gold medals from 2002 to 2014, according to the official Olympics site. But their winning streak was broken in PyeongChang four years ago when they lost to Team USA -- and Canada will be looking to take back the gold this time around.

The curling mixed doubles round robin is in full swing at the National Aquatics Center in Beijing -- colloquially known as the Ice Cube during the Winter Olympics.

But what exactly is curling and why has it become must-watch TV?

What is curling's format? Curling is a team sport -- either men's, women's or mixed -- played on ice.

Two teams take turns sliding the granite stones across a 150-foot long,15-foot-7-inch wide sheet of ice towards a target which is known as the house.

Traditional curling teams are made up of four players, with mixed teams featuring two males and two females or one male and one female if it's mixed doubles.

In team curling, each player slides two consecutive stones, alternating with an opponent, in each round -- known as an end.

When did curling start? Although its exact origins can't be accurately traced, curling is a sport believed to have originated in the 16th century. While an exact date can't be pinpointed, according to the World Curling Federation, the sport was played during its early stages on frozen lochs and ponds in northern Europe.

It wasn't until 1992 that the International Olympic Committee granted medal status to men's and women's curling. It was introduced to the Winter Olympics in 1998 in Japan and has gone on to be a regular inclusion.

What is needed to play curling? Curling stones are made from a special type of granite and weigh almost 20 kilograms (about 44 pounds).

Each curler has their own brush and a specific type of shoe specialized for the sport. In each pair of shoes, one sole grips the ice, while the other is more slippery -- called a slider -- allowing players to slide with the stone when they're playing it.

The brush is used by players to sweep in front of the stone to warm its path, allowing it to travel further if desired.

How do you score points? At each side of the playing surface, there are a series of rings similar to a target -- the house. This helps players determine which stones are closest to the center.

Once an end is completed, a team scores one point for each of its stones in or touching the house that are closer to the center than any of the opposition team's stones.

A curling game is competed over ten ends and the team with the most points wins.

The opening ceremony on Friday night featured a spectacular pyrotechnic show, which included fireworks that burst in the shape of Olympic rings. A stand out of the show was when fireworks took the form of type of tree from China's Huangshan mountain range named the "welcome guests pine."

"Using traditional fireworks to create (the pine tree) in the sky needs some creativity, but it's actually not easy to use firework to create the 'pine needles,'" said Cai Guoqiang, the director of firework of the opening ceremony, in an interview with state-run news outlet Xinhua.
"Because the fireworks burst radially after they are set off, and you need to light up the fireworks when they are still ascending, so they look like the “pine needles” growing in the sky."

The fireworks burst into tall, vertical streaks of light forming the "tree trunk," while smaller, scattered fireworks made up the leaves and branches stretching out from the top. The entire tree display required a set of 1,500 fireworks, according to the organizing team.

The Beijing Olympics Committee identified 45 new Covid-19 cases among Olympic athletes and personnel as of Friday, it said in a statement.

Of the 45 cases, 26 were found among new arrivals at the airport, and 19 involved people already inside the “closed loop” system that separates Olympic staff and athletes from the Beijing public.

Twenty-five of the cases involved athletes or team officials, five of whom were already inside the closed loop.

Since the closed loop system began on January 23, 353 Olympics-related personnel and stakeholders have tested positive. Of those cases, 136 have involved athletes or team officials.

In the same time period, officials have administered more than 741,800 Covid tests -- a daily requirement for anybody in the loop.