Day 3 of the 2022 Beijing Winter Olympics

Our live coverage of the 2022 Beijing Winter Olympics has moved here.

The two were joined by the former IOC Athletes' Commission chair Kirsty Coventry over dinner at the Olympic Club in the Chinese capital.

“During the dinner, the three spoke about their common experience as athletes at the Olympic Games, and Peng Shuai spoke of her disappointment at not being able to qualify for the Olympic Games Tokyo 2020,” the statement said.
“Kirsty Coventry and Peng Shuai also agreed that they would remain in contact. And all three agreed that any further communication about the content of the meeting would be left to her discretion,” it continued.

Peng, one of China's most recognizable athletes, accused former Chinese Vice Premier Zhang Gaoli of coercing her into sex, according to screenshots of a since-deleted social media post dated Nov. 2.

Concern about her safety and whereabouts grew after her allegations, with the Women's Tennis Association pulling out of China.

In December, Peng denied making the allegations in an interview with Singapore-based Chinese-language newspaper Lianhe Zaobao.

She was introduced by the announcer as a "favorite" before effortlessly twisting and spinning down the mountain.

When she reached the bottom, she briefly pulled down her neck warmer and gave a big smile and wave to the crowd.

The 18-year-old was raised in the United States but is competing for Team China in Beijing. She's become a major celebrity here, with her face splashed across advertisements for numerous luxury brands.

Even inside the closed loop hotel gym, the only video playing on the TV screens is an ad featuring Gu gracefully skiing down a mountain.

The big air was constructed on top of a former steel mill. It's a stunning venue with the view of a temple atop a mountain in the distance. There's a significant crowd of local spectators, waving pink and blue Olympic flags.

Millions of people in the host nation will be cheering on the triple-gold-medal threat — Gu is the world champion in halfpipe and slopestyle and the bronze medalist in big air.

Australian curlers Tahli Gill and Dean Hewitt were preparing to be sent home after a series of positive Covid tests threatened their Olympic dreams.

But on Sunday, the pair were given a last minute reprieve when Chinese officials ruled they could compete in the mixed doubles curling event, according to CNN affiliate 7 News.

The team went on to beat Switzerland in their penultimate round-robin match — becoming the first Australian team to win a curling match at the Winter Olympics.

They then went on to also beat Canada on Sunday.

Gill tested positive on her arrival in Beijing last week, but was allowed to compete after later testing negative twice. She was placed in isolation after returning a positive result on Sunday morning.

But officials ruled she could compete after determining her cell counts known as CT values — fell into an acceptable range.

“From my understanding the medical team was able to review it and determine I’m —not infectious and get me out on the ice this afternoon," Gill told 7 News Brisbane. “It’s very special. Just being here is incredibly special."

Gill attributed the positive tests to the residual effects of her contracting the virus a month ago.

A winter sports power couple from the United States and Norway are scheduled to hit the slopes Monday with gold up for grabs in ski events on Day 3 of the Games.

There's also gold medal events in biathlon, figure skating, speed skating and snowboarding. Here are some key moments to look out for:

Day 2 of the Beijing Winter Olympics 2022 was full of action and drama, with athletes clinching six gold medals in events including luge, moguls, ski jumping and snowboarding.

Among the joy on Sunday was heartbreak for California-born figure skater Zhu Yi, who made her Olympic debut for Team China. The 19-year-old is facing a firestorm on Chinese social media after she fell flat on the ice and finished last in the women's short program team event.

Here's who won gold on Sunday:

Papua New Guinea's Prime Minister James Marape tested positive for Covid-19 upon arrival in Beijing on Thursday to attend the Winter Olympics, his office announced in a statement.

Marape is canceling his upcoming trip to France where he was due to attend the One Ocean Summit on the invitation of French President Emmanuel Macron.

"Prime Minister Marape will now abort the French leg of this trip due to Covid-19 restrictions, having returned a positive test result upon arrival in Beijing last Thursday evening," the Prime Minister's office said in the statement on its Facebook page.

The statement offered no further details on the Prime Minister’s health condition but said he was expected to return to Papua New Guinea on Sunday.

Saudi Arabia's Crown Prince Mohammed bin Salman did not attend the Beijing Winter Olympics opening ceremony on Friday despite being on China's official list of attendees.

Instead, the Saudi delegation included Princess Reema Bandar Al-Saud, the Saudi ambassador to the US.

On Jan. 28, the Chinese embassy to Saudi Arabia tweeted a note offering a warm welcome to the Crown Prince to the opening ceremony, adding that it was hoped the visit would promote Chinese-Saudi strategic relations.

Prince bin Salman was one of the most high-profile world leaders due to attend the event, which was overshadowed by diplomatic boycotts by many western nations including the United States, the United Kingdom and Canada.

China’s Ministry of Foreign Affairs said in a statement that Prince bin Salman did not attend the opening ceremony due to "his schedule."
"Prince Mohammed himself wished the Beijing Winter Olympics every success," the statement read.

Prince bin Salman also did not attend a banquet for foreign leaders hosted by Chinese President Xi Jinping and his wife Peng Liyuan on Saturday, shown on state media CGTN.

The Twitter account for Saudi Arabia’s Embassy to the US posted a video of the Saudi princess waving at the Saudi team during the opening ceremony. Alpine Skier Faiq Abdi is the first athlete from Saudi Arabia to ever compete in a Winter Olympics.

Zoi Sadowski-Synnott wasn't even born when New Zealand ended its 40-year wait for a Winter Olympics medal in 1992. On Sunday, she soared through the air at Beijing's Genting Snow Park to claim her country's first ever gold at a Winter Games.

The 20-year-old put in a remarkable final run to claim the gold in the women's snowboard slopestyle event, snatching victory from Team USA's Julia Marino at the death.

Sadowski-Synnott had thrown down the gauntlet with a benchmark setting 84.51 on her first effort, but a disastrous second round opened the door for Marino to edge ahead with 87.68 heading into the third and final run.

It left the Kiwi requiring a near-flawless performance in the most pressurized of circumstances, and the 20-year-old delivered emphatically — a jaw-dropping final run rewarding her with a 92.88 score, over five points clear of Marino's best attempt in second, and a historic gold medal.

"I tried to think last night what it would mean if I managed to land my run and come away with gold, and it feels unreal," Sadowski-Synnott told reporters
"I am super proud of where my snowboarding has come in the last few years and super proud to be Kiwi and show the world what Kiwis are made of.
"I really hope my performance here will inspire young kids and anyone to take up snowboarding because I reckon it's the funnest sport ever." 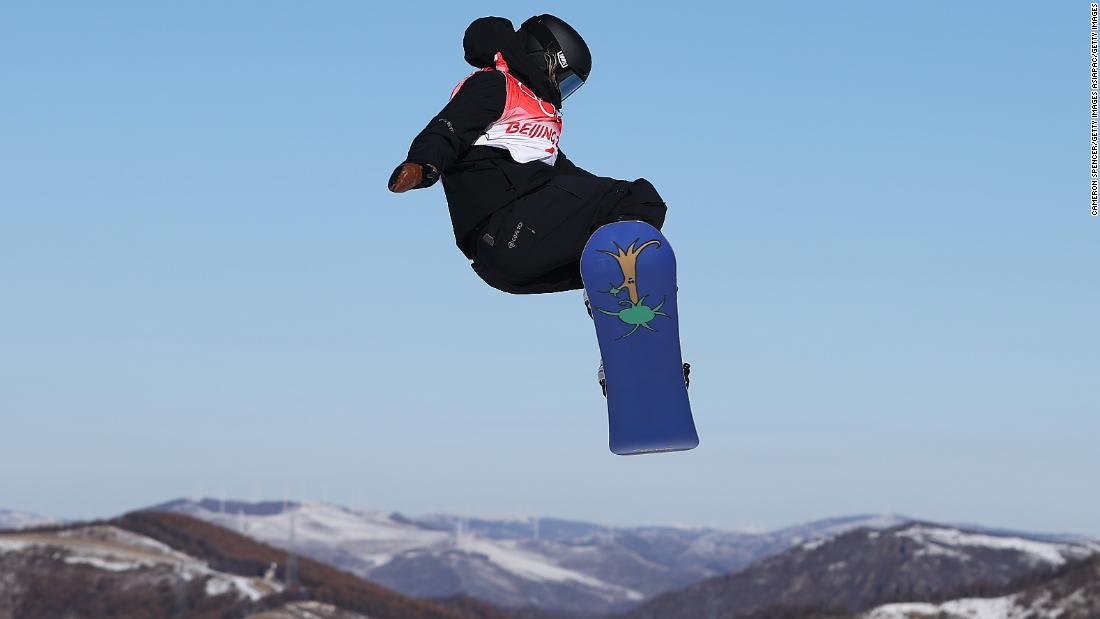 Making her Olympic debut for Team China, California-born figure skater Zhu Yi was eager to prove herself to the Chinese public.

Instead, the 19-year-old is facing a firestorm on Chinese social media after she fell flat on the ice and finished last in the women's short program team event Sunday.

On Weibo, China's Twitter-like platform, the hashtag "Zhu Yi has fallen" gained 200 million views in just a few hours. Many questioned why Zhu, an American-born skater, was picked to represent China at the expense of an athlete born in the country.

By Sunday evening, the hashtag appeared to have been censored. It is unclear why.

Zhu was the first to compete on the second day of the figure skating team event, gliding into the ice rink to loud cheers from the mostly Chinese crowd at Beijing's Capital Indoor Stadium.

But she tumbled and crashed into the wall after a failed jump in the opening combination, and missed another jump later in the program, finishing with the lowest score of the event.

China consequently fell from third place to the fifth in the standings — just enough to progress to the next round of competition.

"I'm upset and a little embarrassed," Zhu said after the race, wiping her tears.
"I guess I felt a lot of pressure because I know everybody in China was pretty surprised with the selection for ladies' singles and I just really wanted to show them what I was able to do but unfortunately I didn't." 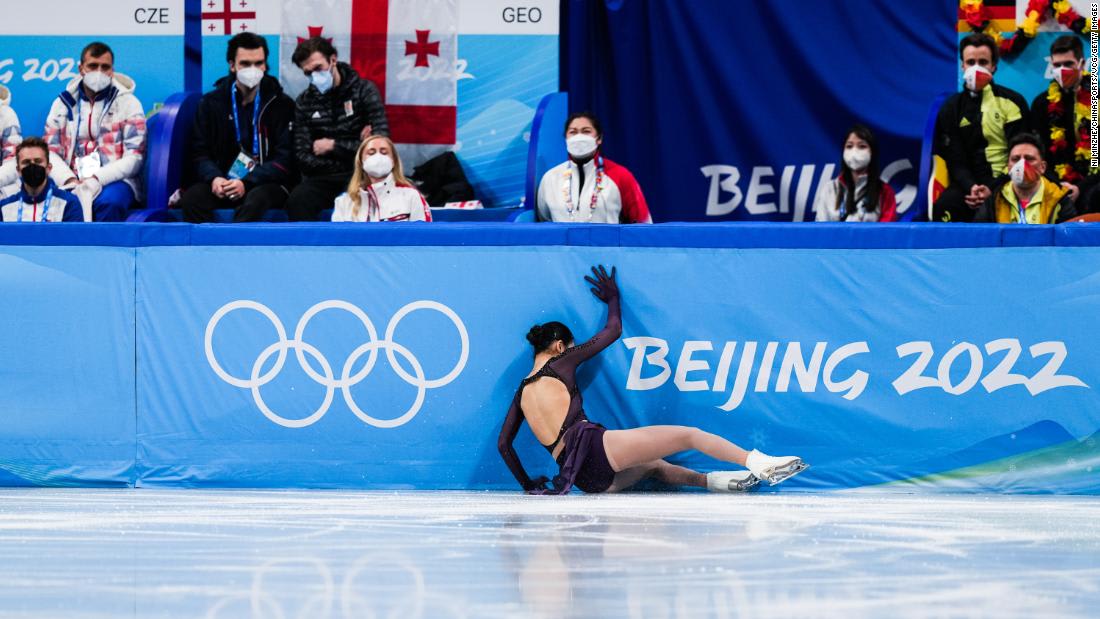