Russian figure skater Kamila Valieva, who is at the center of an ongoing Olympic doping case, had three substances that can be used to treat heart conditions found in her testing sample, according to an exhibit filed Sunday in a hearing by the Court of Arbitration for Sport (CAS) cited by the New York Times.

Two of those substances, Hypoxen and L-carnitine, are not banned.

The exhibit is part of a court application allegedly filed by the World Anti-Doping Agency (WADA) in its case against the 15-year-old skater. The Dossier Center, an investigative website run by an exiled Russian businessman, published the WADA document online and it was reviewed for CNN by Travis Tygart, head of the United States Anti-Doping Agency (USADA). The Dossier Center did not publish the doping control form exhibited in the case, and CNN has not reviewed it.

USADA tried to ban Hypoxen in 2017 due to its performance-enhancing capabilities, but that ban was not implemented, according to documents provided to CNN by Tygart.

"It raises a whole host of questions that have yet to be determined and what appears to be the case of a pretty deliberate attempt to use substances in order to enhance performance," Tygart told CNN on Tuesday.

Tygart is not involved in the investigation but has reviewed the documents. He noted that Valieva declared on her doping control form the use of Hypoxen and L-carnitine.

Supradyn, which can be used as an immunity boosting supplement, was also listed on Valieva's doping control form, according to the document published by the Dossier Center.

The document also said Valieva tested at a "2.1 nanograms per milliliter level" for trimetazidine which Tygart described as "not a trace level."

"It's certainly consistent with an intentional use," he added.

"The picture it paints is, you've got a 15-year-old. Does she have the wherewithal and the knowledge and the financial resources to find two drugs ... to use to increase endurance reduce fatigue? It's clear there was an effort to use substances and drugs to increase performance," Tygart added.
"I don't think for a second this young athlete had the financial resources or knowledge to take these three substances to increase performance, or where to even get these three substances."

Valieva tested positive for the banned substance trimetazidine in December, which is commonly used to treat the heart condition angina.

"It's using the three that showed the intent of trying three different routes that ultimately give the same impact on performance: increased endurance, reduced shortness of breath, tiredness," he said.

CNN has reached out to the CAS and the parties involved in Valieva's arbitration hearing to confirm the validity of the document published by the Dossier Center and has yet to hear back.

CNN has also reached out to the WADA-accredited lab in Sweden that tested Valieva's sample from December for comment.

This post has been updated to add details and include attribution of Valieva's test results.

Teenager Su Yiming is used to fast-paced action, but he's really taken things up a notch at the Beijing Winter Olympics.

The 17-year-old Su is a former child actor, appearing in the 2014 action movie "The Taking of Tiger Mountain" when he was 8, alongside superstars including Tony Leung, before deciding to drop acting for snowboarding.

And his time at the Winter Games has read more like a movie script, with twists and turns galore.

Last week, the Chinese snowboarder narrowly missed out on a gold medal in the slopestyle event to Canada's Max Parrot, eventually claiming silver.

However, unbeknownst to the judging panel at the time, the Canadian had grabbed his knee instead of his board during a trick — a mistake which would have resulted in a points deduction.

"We judged from the media angle that we were given," Iztok Sumatic, Head Judge for Olympic Snowboarding, told CNN Friday, stating that "from that point of view ... we saw a clean execution."

"Afterwards, when the score was already in, the TV replay showed the trick from another angle, where it was clearly shown that Max grabbed the board for a split second, but then let it go and just grabbed his knee," added Sumatic, who likened the moment to the infamous Diego Maradona 'Hand of God' goal against England at the 1986 FIFA World Cup.

While it is difficult to know if Su would have come out on top, Sumatic acknowledged that "the score might have been different."

"It's been very tough, there were a lot of hateful comments," said Sumatic, referring to the backlash from fans.

Despite missing out on first place in such circumstances, Su showed no signs of being effected, bouncing back to win his own gold in the big air event on Tuesday.

"I had many dreams when I was a child," Su said. "To be an Olympic champion was one of them, and today, I already realized my dream.
"There will be more and more challenges in the future. I will be more concentrated on my goals. All I need to do is to deliver all my efforts to achieve my goals." 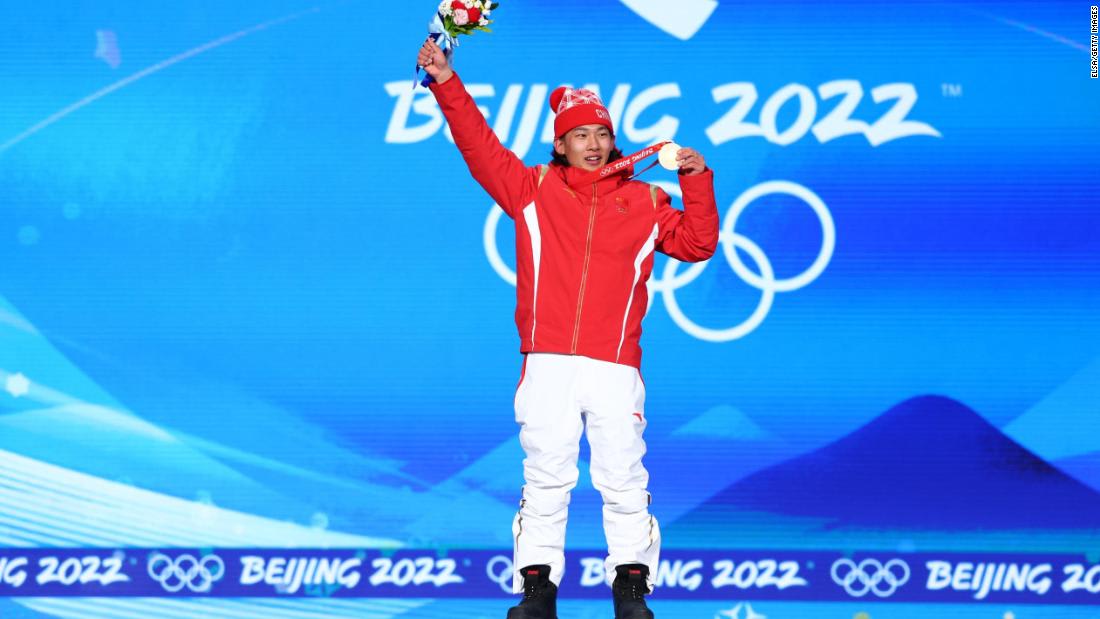 Russian figure skating star Kamila Valieva broke into tears after she posted an impressive performance in the women's short skating program in her first appearance since the controversial doping ruling allowed her to continue competing at the Beijing 2022 Winter Olympic Games.

There was a slight stumble on her opening jump, a triple axel, but she held it together well until the end to post the top score of the women's short program: 82.16. The result means she qualifies for Thursday's free skate medal event.

The crowd were audibly getting behind Valieva, perhaps more so than any other skater, according to CNN staff in the arena.

As soon as she finished, she broke into tears on the ice as the emotions of the past few days appeared to catch up with her.

Weight on her shoulders: When Valieva first skated onto the Olympic ice at Beijing's Capital Indoor Stadium on Tuesday, she was carrying more than the usual pressure of a top-ranked athlete hoping to make the best of under three minutes on the ice.

The 15-year-old is at the center of a doping scandal that has inflamed mistrust of the Russian athletic establishment, pressed sports organizations and athletes around the world to call for reform, and seen the International Olympic Committee (IOC) postpone medal ceremonies for any event that could place Valieva on the podium.

Officials are still investigating whether Valieva or her entourage broke anti-doping rules, after a test she took in December was found to be positive for a banned substance.

Grandfather's medication: On Tuesday, an IOC official said Valieva is blaming the doping violation — in which she tested positive for a heart medication that experts say can improve stamina — on contamination from her grandfather's medication. Her coach, Eteri Tutberidze, told Russian state news agency Tass they are "absolutely sure" she is innocent.

Despite the drug controversy, a top sports court on Monday cleared Valieva to participate in the women's singles competition, one of the most high-profile events of the Winter Olympics and one the young skater sees as a chance for solo gold. 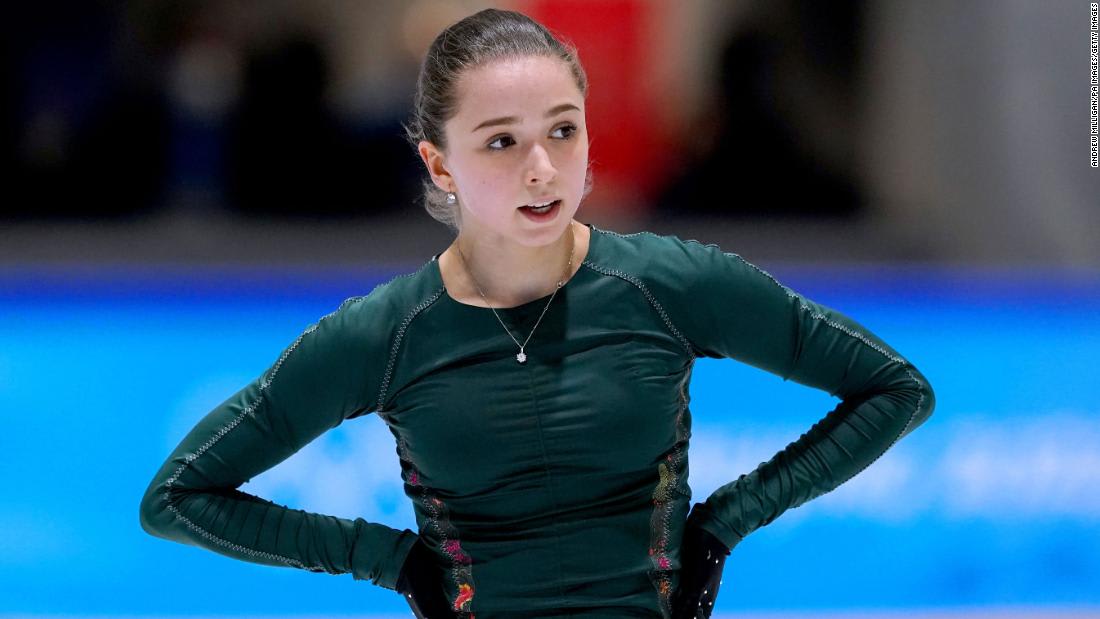 European athletes dominated most medal events scheduled for Tuesday. Here's a recap of the gold medal wins on Day 11 of the Winter Games.

Biathlon: Norway took the gold in the men's 4x7.5km relay.

Bobsled: Francesco Friedrich won gold to enhance his legend status in the sport on an all-German two-man bobsled podium.