Our live coverage of the Beijing Winter Olympics has moved here.

Chinese filmmaker Zhang Yimou’s opening ceremony for the 2008 Beijing Olympics was, for many, the abiding memory of China’s first Games.

In a display of color, coordination and pyrotechnics, the celebrated director announced the country’s arrival on the world stage in dramatic fashion, complete with performers “painting” on an LED scroll, an ode to China’s space program and 2,008 drummers chanting and playing in unison.

The production set a high bar for future directors -- including himself -- because almost 14 years later, Zhang is back to oversee the Winter Olympics Opening and Closing Ceremonies.

“The burden is very heavy,” he told state news agency Xinhua in an interview last month, reflecting on the pressure of becoming the first person to direct both Summer and Winter Games ceremonies.

The pandemic: For one, the tight Covid-19 restrictions have posed significant logistical difficulties. While in 2008 Zhang was able to call on around 15,000 Opening Ceremony performers, this year’s cast is just a fifth of that. The show is also expected to be significantly shorter, down from four hours to just over an hour and a half, though this is partly due to the cold weather and safety concerns.

China on the world stage: Perhaps more importantly, though, the way China views its place in the world has also undergone a profound transformation in the intervening years.

“In 2008, the Olympics was a brilliant stage and chance for our country to show ourselves,” Zhang told Xinhua. “In fact, there are a plenty of pages across our 5,000-year history that we would like to present to the world. Our civilization, our history, and how we got to where we are today.

“It’s different now. China’s status in the world, the image of the Chinese, and the rise of our national status, everything is totally different now.”

Opening Ceremony: What this means for the themes and design of 2022’s ceremonies remain to be seen. Details about proceedings are tightly under wraps, but Zhang hinted that the cauldron-lighting could be more spectacular than 2008’s, which saw former gymnast Li Ning circling the Bird’s Nest stadium suspended on high wires.

“It will be unprecedented in the over 100-year history of the Olympic Games,” Zhang said, adding: “I’m very nervous. I think it’s totally innovative and people will be surprised.”

The US State Department has shared information about China's alleged human rights abuses with US Olympians and defended athletes' right to express opposition to those alleged violations on the eve of the Winter Olympic Games in Beijing.

"US athletes are entitled to express themselves freely in line with the spirit and charter of the Olympics, which includes advancing human rights. We call on the PRC to respect human rights and fundamental freedoms, including that very freedom of expression," State Department spokesman Ned Price said Wednesday.

Protest ban: The Olympic Charter's Rule 50 dictates that "no kind of demonstration or political, religious or racial propaganda is permitted in any Olympic sites," but it does not prohibit voicing concerns on social media or during media interviews.

Chinese warning: Athletes should not express anything "against the Olympic spirit," an official on the Beijing organizing committee said recently, without acknowledging the rule doesn't prohibit freedom of expression outside Olympic sites.

It remains unclear what kinds of protests athletes might partake in, but the comments could have a chilling effect on some competitors.

Allegations against China: The United States has said that China is committing genocide and crimes against humanity against Uyghur Muslims and ethnic and religious minority groups who live in the western region of Xinjiang. China has also silenced dissent, taken political prisoners and set up invasive surveillance of its population, critics and US officials say.

China denies the allegations and has called for the US to "stop interfering" with the Olympics. 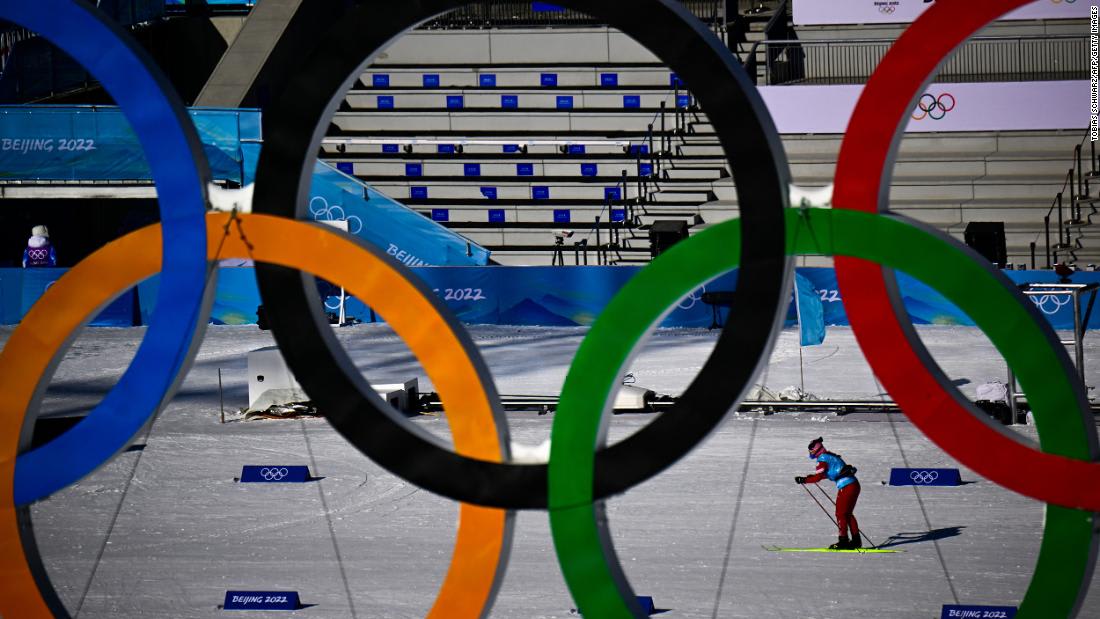 Foreign journalists given spectator tickets to the Opening Ceremony have to undergo four Covid-19 tests -- 48 and 24 hours before the event, and 24 hours and seven days after.

You also have to be vaccine-boosted and be in Beijing for at least 14 days ahead of the ceremony.

On Friday, we gathered at our meeting point eight hours before the scheduled starting time of the ceremony.

We boarded the waiting bus after staff verified our Covid-19 test results and were then given a photo ID for the event.

We were then taken to an elaborate security check area set up at Chaoyang Park, still miles away from the stadium.

No bags allowed so everyone has been stuffing phones and power banks in pockets.

Once cleared, we entered a security bubble and switched to a different “clean” bus, where minders handed out the actual ticket as well as bag of snacks and water.

The bus left for the stadium around 3 p.m. local time traveling through an almost deserted city as police cordoned off streets for Olympic traffic.

Upon entering the Olympic Green, the bus traversed down winding roads in search of the Bird’s Nest. We finally stopped and then it was another long march to the stadium.

After half an hour or so, we finally reached the actual entrance. Another security check and we were into the stadium ground, which felt eerily quiet for the Games’ curtain raiser.

Inside, spectators were assigned every other seat with plenty of empty ones by the time the pre-show was about to begin.

With the temperature fast dropping, it started to feel freezing in the stadium even with layers of winter clothes.

In goodie bags, organizers provided each spectator with a flimsy fleece blanket and some personal warmer patches -- not forgetting a chocolate bar.

The mascot for the Winter Olympics is Bing Dwen Dwen -- a panda dressed in a full-body "shell" made out of ice -- and Shuey Rhon Rhon for the Paralympics, a Chinese lantern child.

Bing Dwen Dwen (Bing means "ice" in Mandarin Chinese, while Dwen Dwen means "child") was chosen from more than 5,800 submissions from around the world.

According to the Paralympic website, Shuey is the same pronunciation as the Chinese character for "snow," the first Rhon means "to include, to tolerate," and the second means "to melt, fuse and warm."

Lots of surrounding streets are blocked off around the Beijing National Stadium, commonly referred to as The Bird's Nest, which will host the curtain raiser.

There are crowds of security guards in the area and multiple gates to pass through in order to get to the stadium.

There is also the 'closed loop' to contend with as organizers bid to stop the spread of Covid-19 during the Games.

Anyone entering the bubble must be fully vaccinated, or face an additional 21-day quarantine upon arrival in Beijing, before being allowed in.

They must also use an app to upload their body temperature and answer questions about their health status every day.

Participants will be tested for Covid-19 every day and must wear face masks at all times. 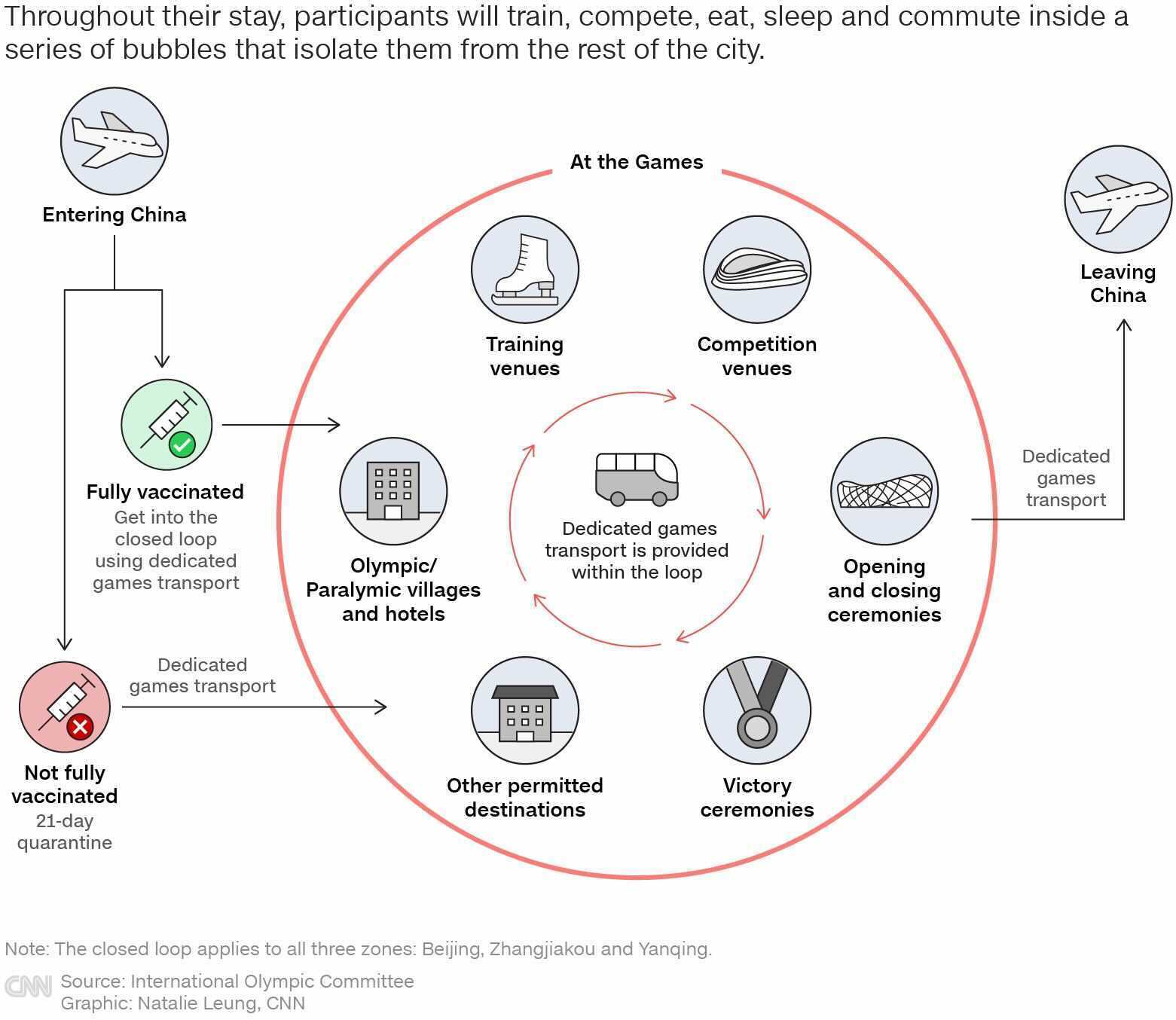 The stakes for catching Covid-19 at Beijing 2022 are extremely high.

The PCR tests for the Beijing Winter Games are also more stringent than those used by others sports events, such as the NBA and NHL, meaning they can return positive at a lower viral load.

A positive test can also affect the person's teammates and colleagues.

Anyone who has had a mask-less exposure for longer than 15 minutes to an infected person is considered a close contact and will be subject to twice daily testing.

The system -- and China's sensitive testing policy -- has already been put to the test after German-born Belgian skeleton racer Kim Meylemans tested positive upon her arrival into Beijing and was sent to an isolation facility.

Her emotional Instagram post and subsequent involvement from the IOC shows how serious China is about limiting any hint of infection.

Bilateral talks are underway in Beijing between Russian President Vladimir Putin and Chinese leader Xi Jinping at the Diaoyutai State Guesthouse, according to Chinese state media.

In their first in-person meeting in over two years, the two leaders will discuss bilateral trade and key issues on “regional and global agendas,” according to a letter by Putin published Thursday by Xinhua News Agency, ahead of the meeting.

In the same letter, Putin praised the "new era" of relations between China and Russia and highlighted the growing economic and energy ties between the two countries.

According to Chinese state media, Xi said that the pair met at the Opening Ceremony at the 2014 Sochi Winter Olympics, at which they promised they'd meet eight years later in Beijing, and that he hopes their meeting will "inject more vitality into China-Russia relations."

China's President is expected to host a series of bilateral meetings Friday and a banquet for dignitaries attending the Winter Games -- including United Nations Secretary-General António Guterres and World Health Organization (WHO) Director-General Tedros Adhanom Ghebreyesus, according to Beijing.

The Games are a big moment for Lydia Gunko, Ukraine's first female bobsledder at the Winter Olympics — one of the new sports being debuted in Beijing.

This competition is "extremely important ... for the development of this sport in Ukraine," Gunko told CNN, adding she hopes her appearance will have an impact back home.

But looming over her debut is the stand-off between Ukraine and Russia, with tensions high after thousands of Russian troops moved to the border between the two nations.

Ukrainians warned to avoid Russians: Ukraine's sports minister has already said its athletes should stay away from their Russian rivals — who, like in Tokyo 2020, are competing under the ROC banner again because of a doping scandal — at the Games, and that Ukrainian athletes have been briefed on how to behave in case of "provocations."

Gunko, 28, said she will follow the guidance, adding the conflict has weighed on her mentally ahead of the Games.

"We are clearly not friends with the Russian athletes," Gunko told CNN. "We have to train and perform with them but because their country wants to violate our integrity, we cannot have easy contact with them."

She added: "You try to distance yourself from all of this during competition and training. Of course, in real life, you can't isolate yourself because many friends and acquaintances suffered from Russia's actions." 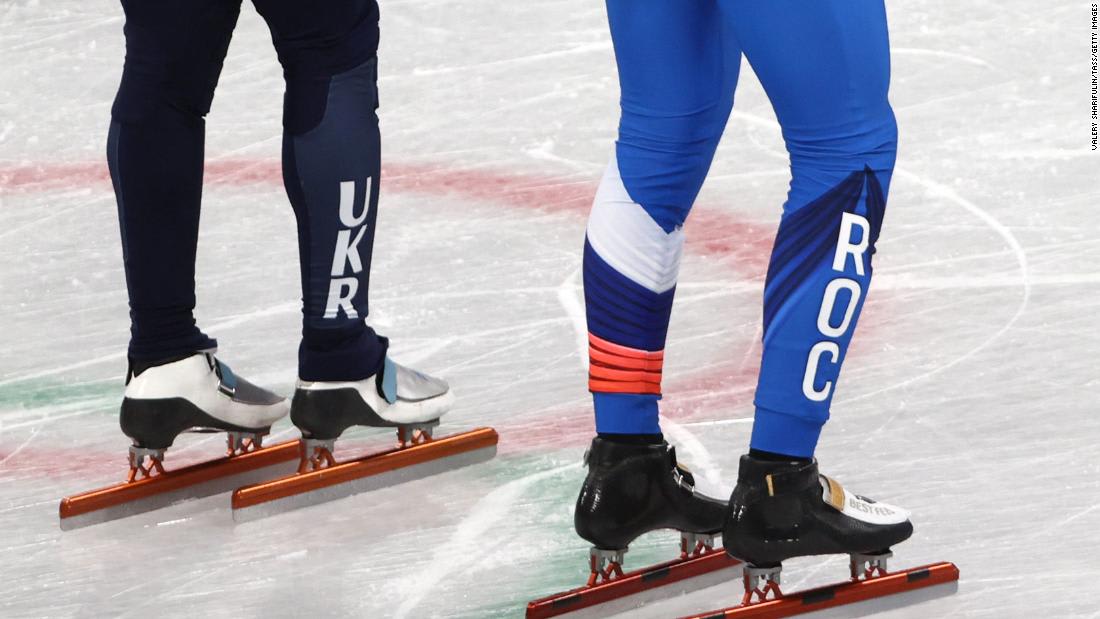 Having been largely sealed off from the world for two years, Beijing is now welcoming the arrival of thousands of foreign Olympians, officials, journalists and support staff — including from countries where the highly transmissible Omicron variant is raging.

Whether Chinese authorities can keep the Games Covid-safe is the ultimate test of China's zero-Covid strategy.

To limit the spread, it is sealing the entire Games inside what authorities have called a "closed loop system" — a bubble completely cut off from the rest of the city.

Here's how it works: The Beijing bubble is welcoming an estimated 11,000 people from around the world — and they will be shuttling through three competition zones up to 111 miles (180 kilometers) apart.

The separation: Participants will be confined to the "closed loop" and they will compete, work, eat and sleep without making any contact with the wider Chinese population.

The "closed loop" consists of a series of stadiums, conference centers and more than 70 hotels, with those in downtown Beijing fenced off and closely guarded by police; it even has its own transportation system, with 4,000 vehicles dedicated to moving participants from place to place.

The three zones are linked by high-speed train and highways. To maintain the separation, even the train cars are divided, and the closed-loop buses are given specially marked lanes. Drivers not part of the Olympics who cross into these lanes will be fined.

Athletes, staff and volunteers inside the closed loop will also be separated from spectators, who have their own transport and entrance to the events.

Inside the bubble: Anyone entering the bubble must be fully vaccinated, or face an additional 21-day quarantine upon arrival in Beijing before being allowed in.

They must also use an app to upload their body temperature and answer questions about their health status every day.

Participants will be tested for Covid every day and must wear face masks at all times.